Like most of us, several US Presidents have expressed their love for ice cream: something which began much earlier than with the well-known ice cream fans Biden, Obama and Reagan! The records show that ice cream was served already at the estate of the first President George Washington. But the first recorded American recipe for ice cream originates from Thomas Jefferson, Founding Father and third President of the United States. A prototype for American, Philadelphia-style ice cream then? Oh no – this is a recipe from France, where Jefferson served as a diplomat after the American war of independence and around the dramatic times of the French revolution. 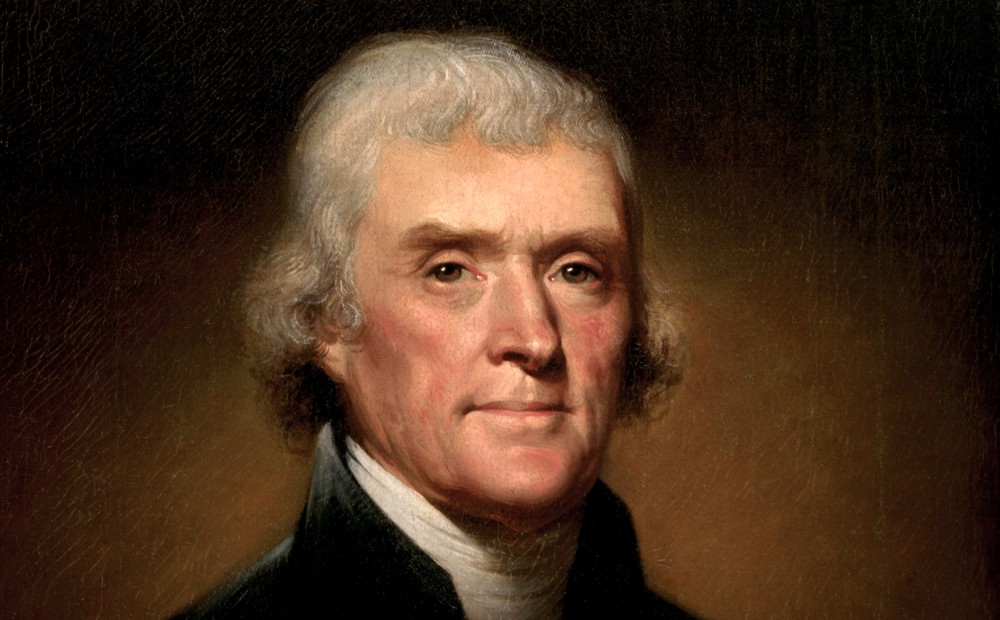 Thomas Jefferson – not only one of the “Founding Fathers” of the USA but also credited with writing down one of the earliest American ice cream recipes – a feat made possible by Jefferson’s earlier years spent in France.

While Jefferson’s legacy as a statesman is undisputed, his personal qualities as a man living by his own principles have been more debated. Many find it deeply unsettling that the “enlightened” Jefferson, principal author of the Declaration of independence, and – in principle – a staunch opponent to slavery, apparently had few qualms about owning a lot of slaves himself. And most historians today agree that Jefferson also had a four decades long relationship with his much younger, mixed-race slave (and half-sister to his late wife) Sally Hemings: a liaison which resulted in six children, also born into slavery. A love story, a matter of slave-owner’s might, or something in-between? – Well, who can really tell today.

While a lot has been written about Thomas and Sally, we will devote some attention to Sally’s brother James Hemings. Jefferson brought him along to France, where he was put to study fine French cooking under French chefs and pâtissiers. So it was likely thanks to skilled underlings like James and the French butler Adrien Petit that Jefferson could bring back a lot of refined French cuisine and cooking skills to the states (James was –  like his sister Sally – a slave but eventually managed to negotiate his freedom. Only a few years later, however, he tragically killed himself under circumstances that indicated that he – like many others in the restaurant sector to this very day – had developed alcohol problems).

In other words, Jefferson most likely did not spend any time on ice cream making himself, but left that to his skilled servants. Dining guests’ accounts tell us that ice creams seem to have been a frequent dessert (some even mention ice creams enclosed in warm pastry … some early type of Mochi?!). Jefferson’s estate Monticello had a near-by river and its own ice house, so it seems that ice was guaranteed throughout the year!

Ice cream had already been introduced in the US, but Jefferson is credited with writing down the first ‘American’ ice cream recipe and as you can see, even doing it in a quite legible way! These days, the document is safely stored in the US Library of Congress. And while Jefferson held the pen, the recipe is believed to date back to his time in France and originate from his trusty French butler/dessert specialist Adrien Petit.

Jefferson’s hand-written recipe for vanilla ice cream, now in the Library of Congress.

Here is it, in case you need help to decipher Jefferson’s handwriting:

mix the yolks & sugar
put the cream on a fire in a casserole, first putting in a stick of Vanilla.

when near boiling take it off & pour it gently into the mixture of eggs & sugar.

put it on the fire again stirring it thoroughly with a spoon to prevent it’s sticking to the casserole.

when near boiling take it off and strain it thro’ a towel.

put it in the Sabottiere

then set it in ice an hour before it is to be served. put into the ice a handful of salt.

put salt on the coverlid of the Sabotiere & cover the whole with ice.

leave it still half a quarter of an hour.

then turn the Sabottiere in the ice 10 minutes

open it to loosen with a spatula the ice from the inner sides of the Sabotiere.

shut it & replace it in the ice

when well taken (prise) stir it well with the Spatula.

put it in moulds, justling it well down on the knee.

then put the mould into the same bucket of ice.

leave it there to the moment of serving it.

to withdraw it, immerse the mould in warm water, turning it well till it will come out & turn it into a plate.”

How much is “a bottle of cream”? or Jefferson’s ice cream recipe slightly modernised

Vague or outdated units of measurements in older ice cream recipes can be bewildering, and Jefferson’s one is no different. Luckily for us, Marie Kimball, author of “Thomas Jefferson’s Cook Book”, has proposed ‘modernised’ amounts so I went with her amount of cream here.

What type of cream, you may ask? Well – here I did some dairy research of my own and realised that in Jefferson’s days, the fat content of cream was usually uneven and generally much lower than today (this changed only with the later technical invention of the milk-cream separator): in other words, best to stay away from double cream and use some type of lower-fat cream if you want to end up with something more true to the original! (I went with a cream of 33 % fat, which worked fine. But for even greater authenticity, you could probably go a bit lower still).

Otherwise, the most notably difference between the original and the modernised recipe is probably that I (like Kimball) use more vanilla than what Jefferson dictated: his amount perhaps a reflection of how terribly expensive vanilla must have been at the time (mind you – vanilla is still the world’s second most expensive spice, after saffron).

Do you have an ancient ice cream sabottiere? Or perhaps some other type of good ol’ hand-cranked ice cream machine? Good for you! You can replicate Jefferson’s process too, then.

What follows below, however, is a more modern take which assumes that you have an ice cream machine (or at least a household refrigerator, so you can still-freeze ice cream). Again, if you want to be more modern, feel free to skip the traditional “staged” approach to making custard ice cream – which I however reproduced in the recipe below to protect historical accuracy –  and just add all the ingredients in a sauce pan from the start (the more Modernista approach which I personally tend to use all the time for custards). 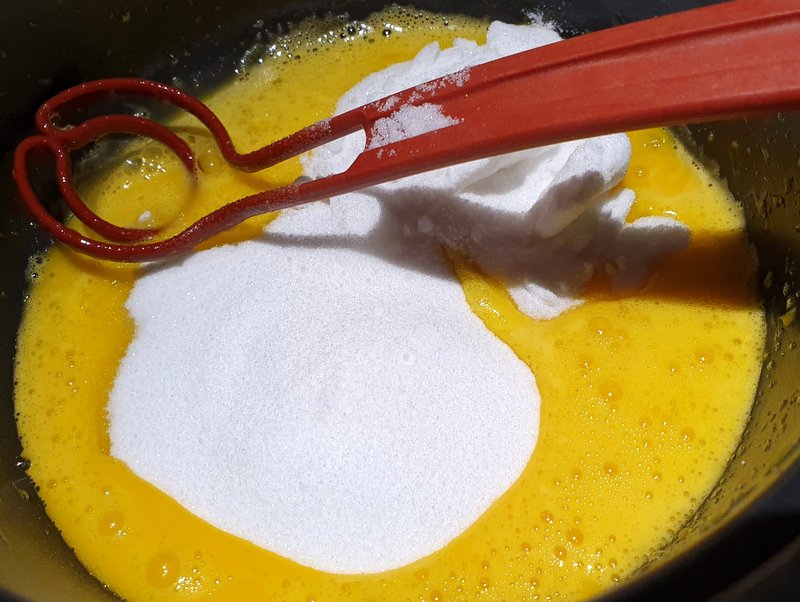 A classic staged approach to custards starts with whisking the sugar and the egg yolks. However, I will depart from the original recipe and prepare the custard base the modern way: by mixing all the ingredients from the start and then bring it up to the so-called Nappe stage. 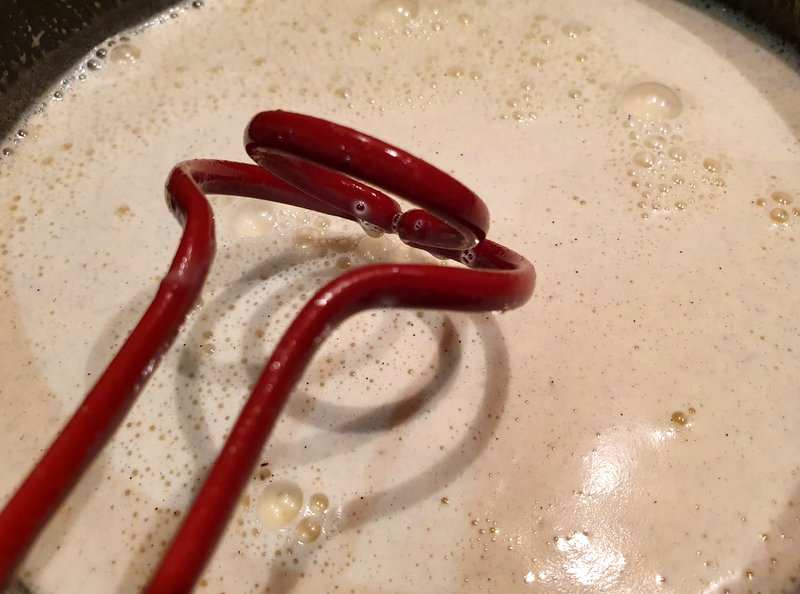 Reaching the Nappe stage (approximately in the temperature bracket of 82-84º Celsius /189-183 ºF) is important both to ensure that the egg yolks have done their “stabilising job” but also to ensure that they have been properly pasteurised. A kitchen thermometer is always useful, otherwise rely on rule of thumb-estimates like the Spoon test (described on the blog). 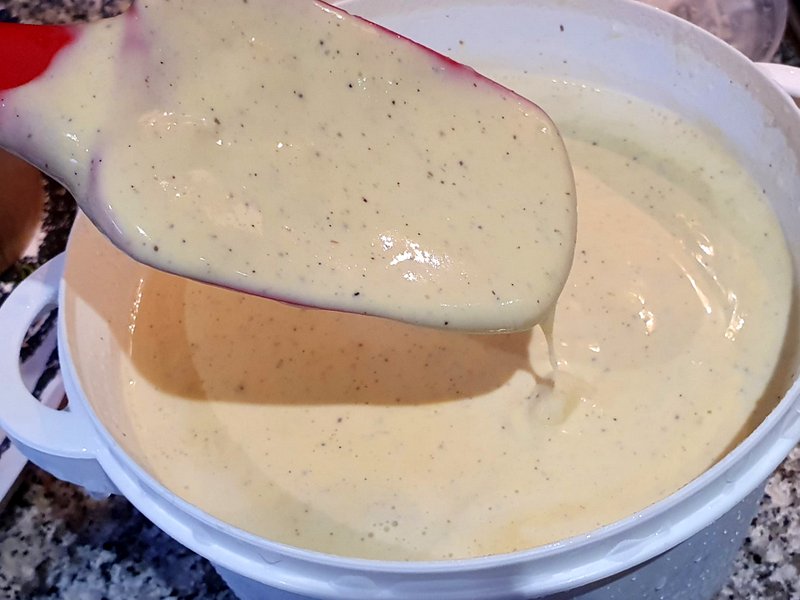 The Jefferson base is ready! Now, let it cool down and preferably chill a couple of hours or overnight before churning (or still-freezing, if you don’t have an ice cream machine).

Since a little salt tends to enhance the (vanilla-) flavour, I took the liberty of adding a pinch: this is, however, not part of the original recipe so exclude if you want to go for fullest possible authenticity 😉 .

A Presidential ice cream standing the test of time? 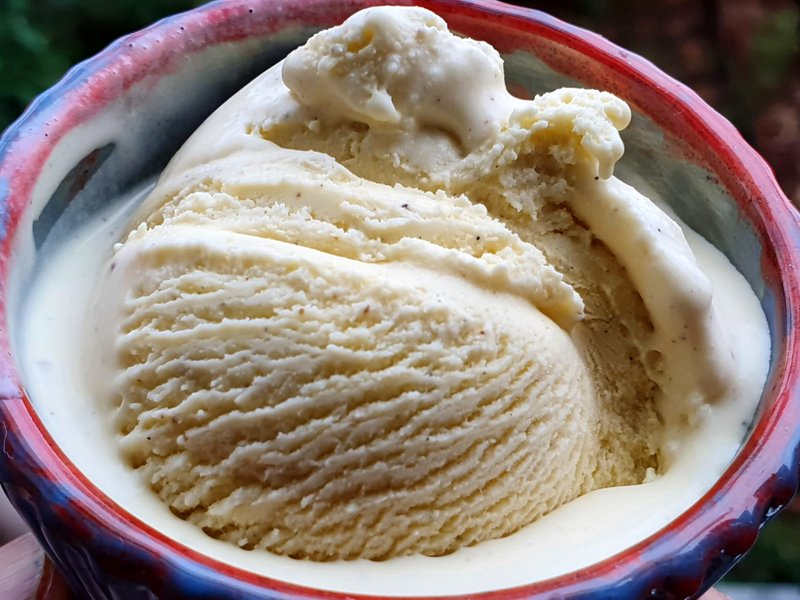 Indeed – there is nothing to complain about here, and all lovers and connaisseurs of exquisite vanilla ice cream French style should definitely try it out!

Jefferson’s French vanilla is very good, rich and pleasant, and the consistency is also good (although prolonged storage in the freezer most likely will require some prior thawing before serving – something which tends to be the case with most quality home-made ice creams. As noted, the creams of past days were seldom as fat as the creams we are used to today so I strongly suggest that you stick to cream with a little less fat when preparing this one (no double cream, for instance!). Not only will it make the ice cream more authentic but you’ll also avoid the risk of ending up with something you may find overly rich.

PS. Like all good vanilla ice creams, this one is also a perfect choice for when you want a good ice cream base for other flavours, add-ins or add-ons!

5.0 from 1 reviews
Print
Thomas Jefferson's Vanilla ice cream
By: Thomas Jefferson (adapted by Anders@icecreamnation.org)
Thomas Jefferson, one of the US "Founding Fathers" and third President of the USA, is also credited for authoring the first recorded American ice cream recipe. It is for French style vanilla ice cream, and it is highly likely that Jefferson (or rather his butler and dessert-specialist Adrien Petit) picked it up during the years spent in France. Some possible suggestions/modifications have been added, and thanks to Marie Kimball for providing a modern take on the quantity of cream to use!
Ingredients
Instructions
Notes
If you don't want to bother with the classic "staged approach" to making custard ice cream, do like me and go the "Modernista way": simply combine all the ingredients in a saucepan from the very start, whisk and bring it all to the Nappe stage 😉
Wordpress Recipe Plugin by EasyRecipe
3.5.3251