A nice cup of tea is something many people look forward to every day. But why not make that a cup of tea ice cream for a change?  And Earl Grey, the classic British black tea with its distinct touch of bergamot oil and citrus, turns out to be a splendid ice cream flavour! 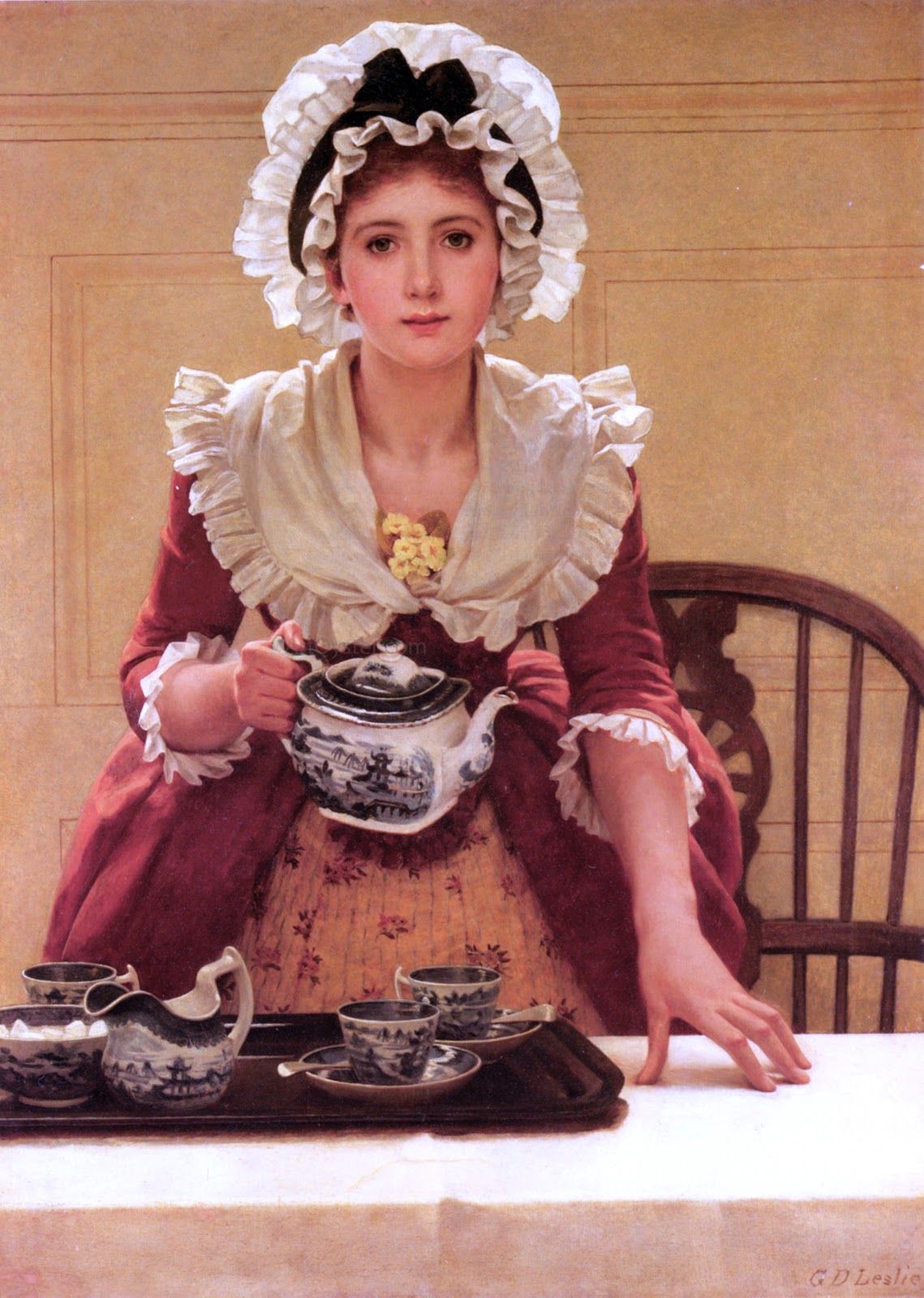 “Could I interest you in a nice cup of tea ice cream?”

Many tea ice cream recipes focus on exotic teas (see for instance my own post on Masala Chai ice cream), but much culinary joy can be had also with more widely-sipped ‘household’ blends.  Earl Grey tea is named after Charles Grey, 2nd Earl Grey and once the UK Prime Minister. The particular blend was made for him by a Chinese mandarin, either as a gift or on the Earl’s demand (the stories differ), and remains one of the most popular blends of the tea-world. 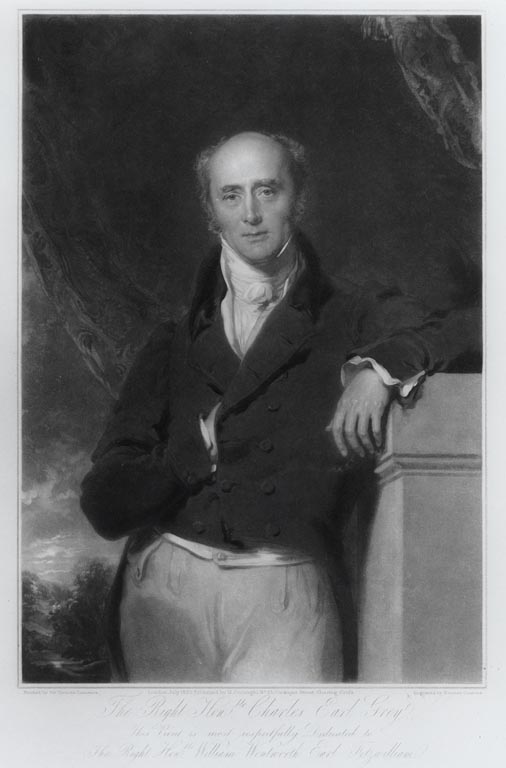 Tea-flavours in ice creams, or How to best infuse tea and avoid the bitterness

Unless you decide to finely crush tea leaves and simply mix them directly into your ice cream as an add-ins (yes, there are such recipes too!), the tea needs to be infused. When we brew tea, we infuse it in water. But as all tea-drinkers also know, brewing tea in too hot water or for too long time may result in a bitter side-taste. The bitterness is caused by the release of tannins, and we certainly do not want much of those in our cup (or in our tea ice cream, for that matter). So, what to do?

Several tea ice cream recipes actually suggest steeping-times of up to 30 minutes in hot liquid, which seems like a sure-fire way of setting off quite a lot of tannins.

On the other side of the scale we have the champions of cold steeping (infusing the tea in cold liquid, but for a markedly longer time). Cold infusion does seem to be a good way of avoiding the release of bitter tannins but has at least one drawback: time. For example, the reputable Weirs’ recipe calls for 24 hours of cold infusion.

Myself, I decided to follow the sound advise of professional tea-writer Lindsey “Vee” Goodwin. For ice cream-infusions, she recommends that the same times and temperatures normally used for brewing the tea should be used. The normal tea-dosage, however, should be doubled (not forgetting the recommended “add one bag for the pot”, I decided to go with 7 tea-bags for this recipe).

Once upon a time, Twinings, the manufacturer of Earl Grey, provided specific recommendations for how to best prepare Earl Grey tea. Their recommendation was 2 1/2 to 3 minutes of brewing (for loose tea, 5 minutes), in a liquid that had been brought to boil (i e, to 100º Celsius/212º F). While that temperature-recommendation obviously is based on infusion in water, it should also be OK for our dairy (after all, milk mainly consists of water).

Mind you, since I missed the distinction between tea-bags and loose tea, I infused my tea-bags for five minutes: As nothing particularly bad seemed to come out of this, the recommendations do seem to come with some safety margins. However, if you go for a longer time, be careful with any squeezing of the bags towards the end of the infusion, as some consider that this is highly likely to yield a (mainly) bitter result. Stick to letting the tea-bags drip off, or follow another expert advise: only leave the bags in the liquid for three minutes, then stir and – as per your own preferences – squeeze out the tea-bags before discarding them. 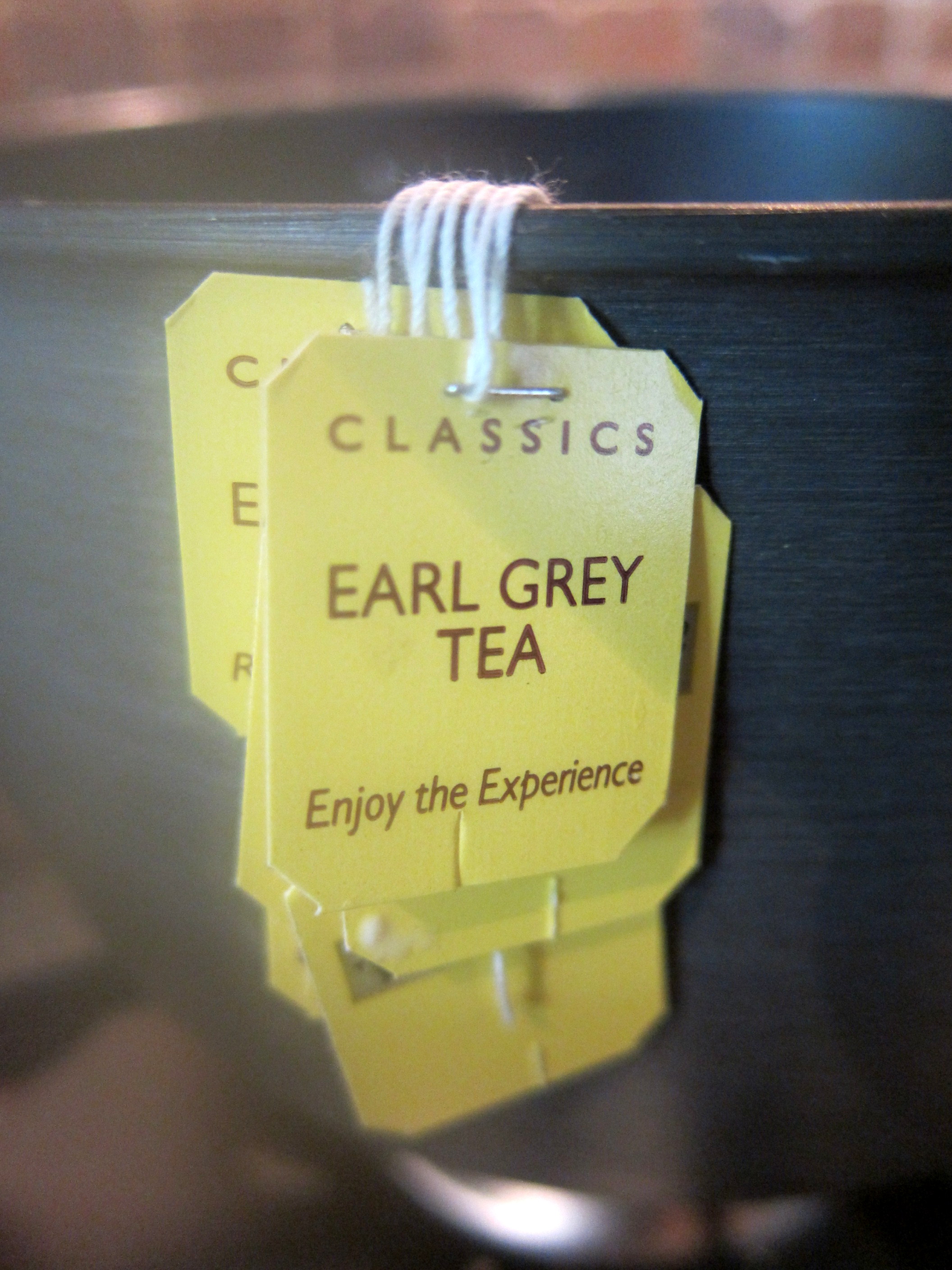 Infusing the dairy with Earl Grey – keep it short, to avoid bitterness

In summary, put the milk and the cream in a saucepan. Bring the dairy to the (exact) boil and put in 7 tea-bags. Leave to infuse for 3-5 minutes, then let the bags drip off and discard them. You now have tea-infused dairy, which will be the corner stone of our nice ice cream. Now – on to the choice of a suitable ice cream base!

I have never liked tea with cream, so I was interested in finding a mostly milk-based foundation for the ice cream. Fernanda Gosetti’s base gelato turned out to be a perfect fit.  Making that base is basically a matter of following the great tradition of ice cream custard-making so well known from Italian and French ice creams:

As noted, begin by making the tea-infusion: pour all the dairy in a saucepan and bring to the (exact) boil. Then add the tea-bags and let them infuse. When the minutes are up, remove the teabags and discard them. 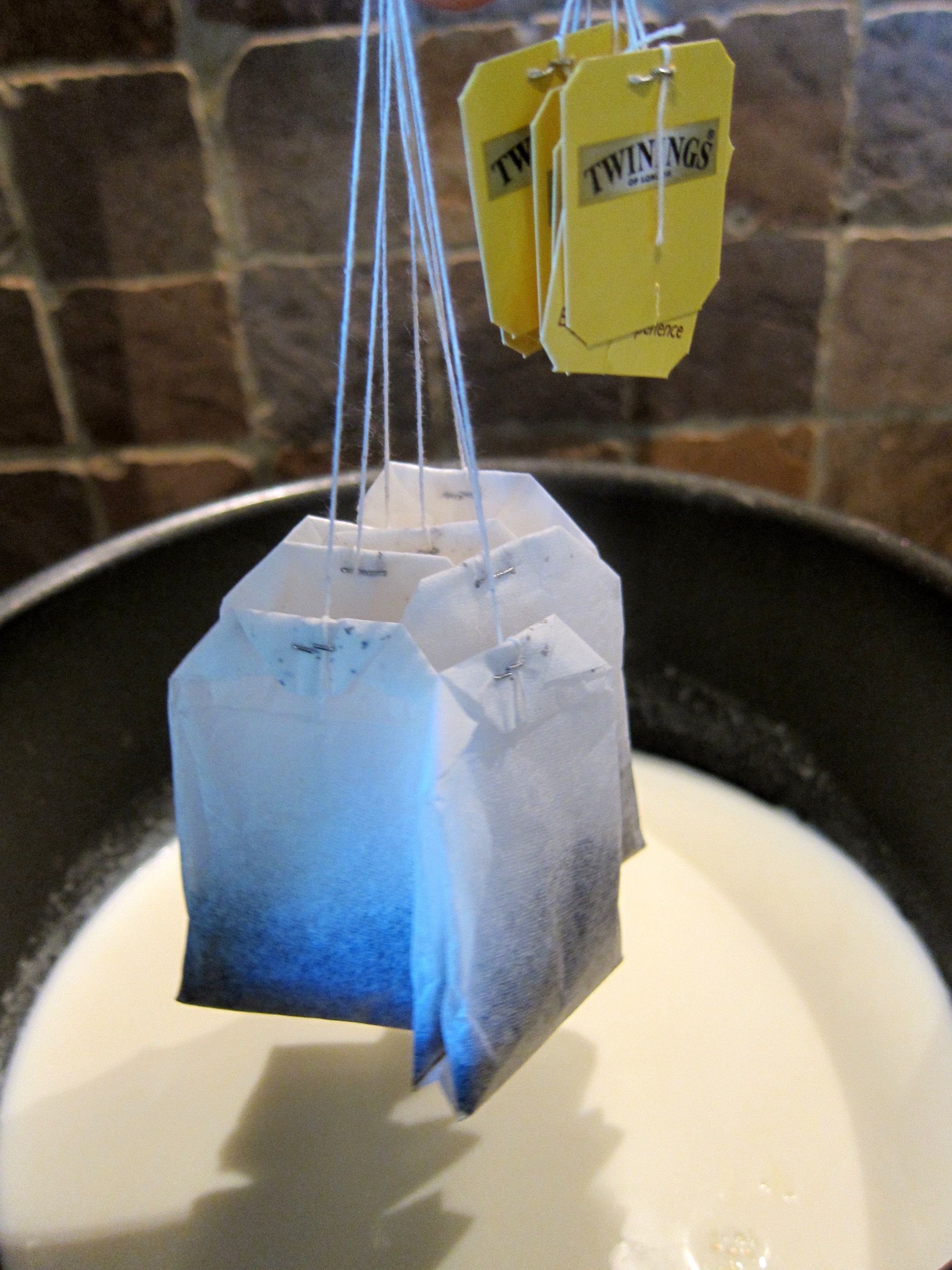 Now whisk together the egg yolks and the sugar (as you will note, the amount of sugar used is slightly reduced here, to better harmonise with the tea-flavour).

Slowly and little by little, pour the tea-infused dairy into  the egg-sugar mixture while whisking all the time (“the tempering stage”).

When the ingredients have been well whisked together, pour back the blend into the saucepan. If using, add a minimal amount of vanilla (once again, a concession to the overall tea-flavour), and – while whisking continuously – bring the ice cream base to about 82-84º Celsius (189-183 ºF). While a thermometer always is handy at this stage, you could also rely on the Spoon-test: the custard should be ready when you are able to draw a line that stays with your finger through the custard on the back of a spoon. And do remember to whisk all the time – you don’t want to end up with scrambled eggs! (the careful ones make a habit of passing the custard through a sieve by the end of the process, just to avoid any unfortunate surprises).

Once the custard base is ready, take it off the heat and let it cool down as quickly as possible. Once cooled down, place it in the refrigerator to chill for a few hours, and preferably over night, before churning. Allowing the custard base to ‘mature’ will result in better consistency and improved flavours. 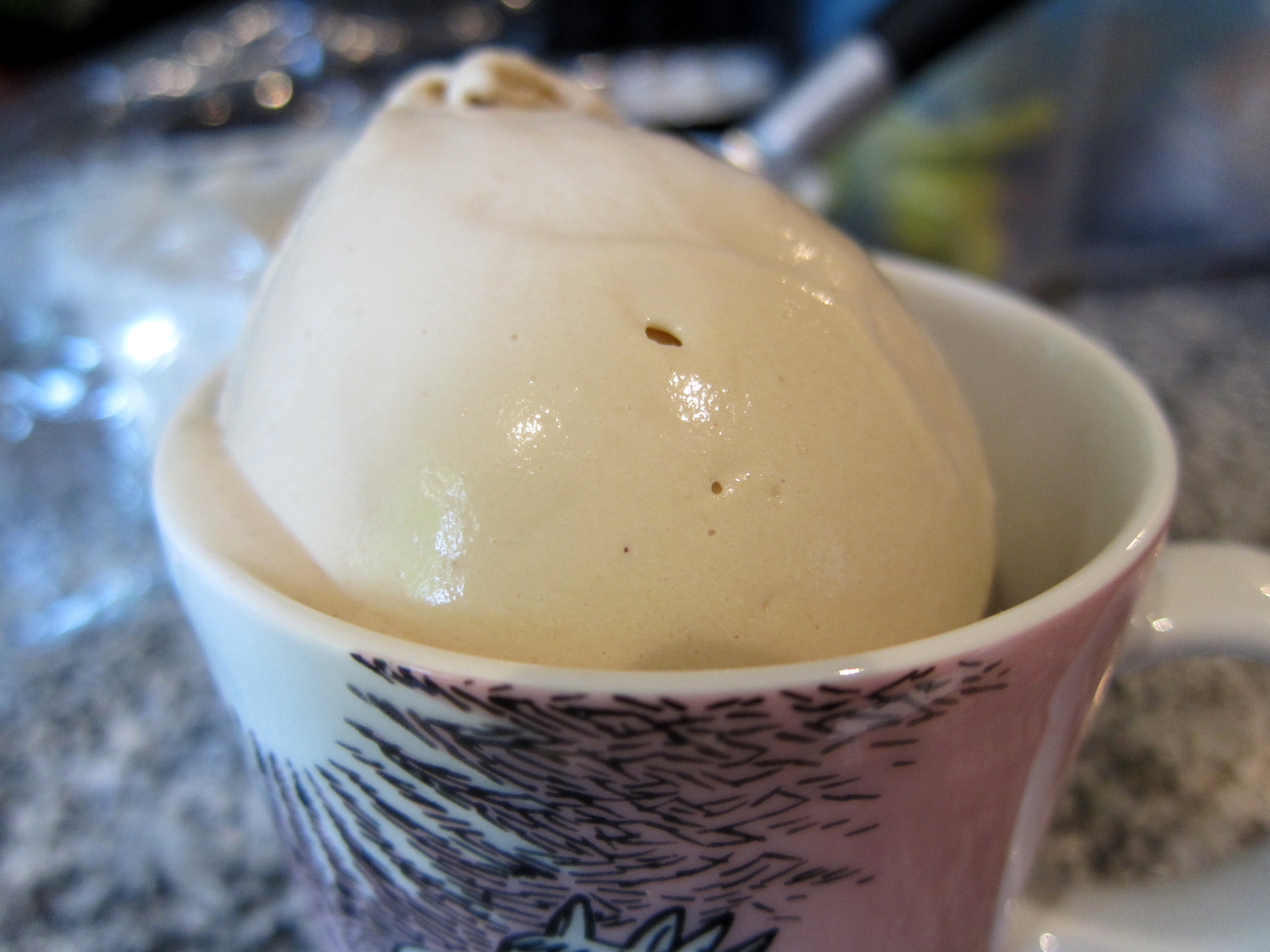 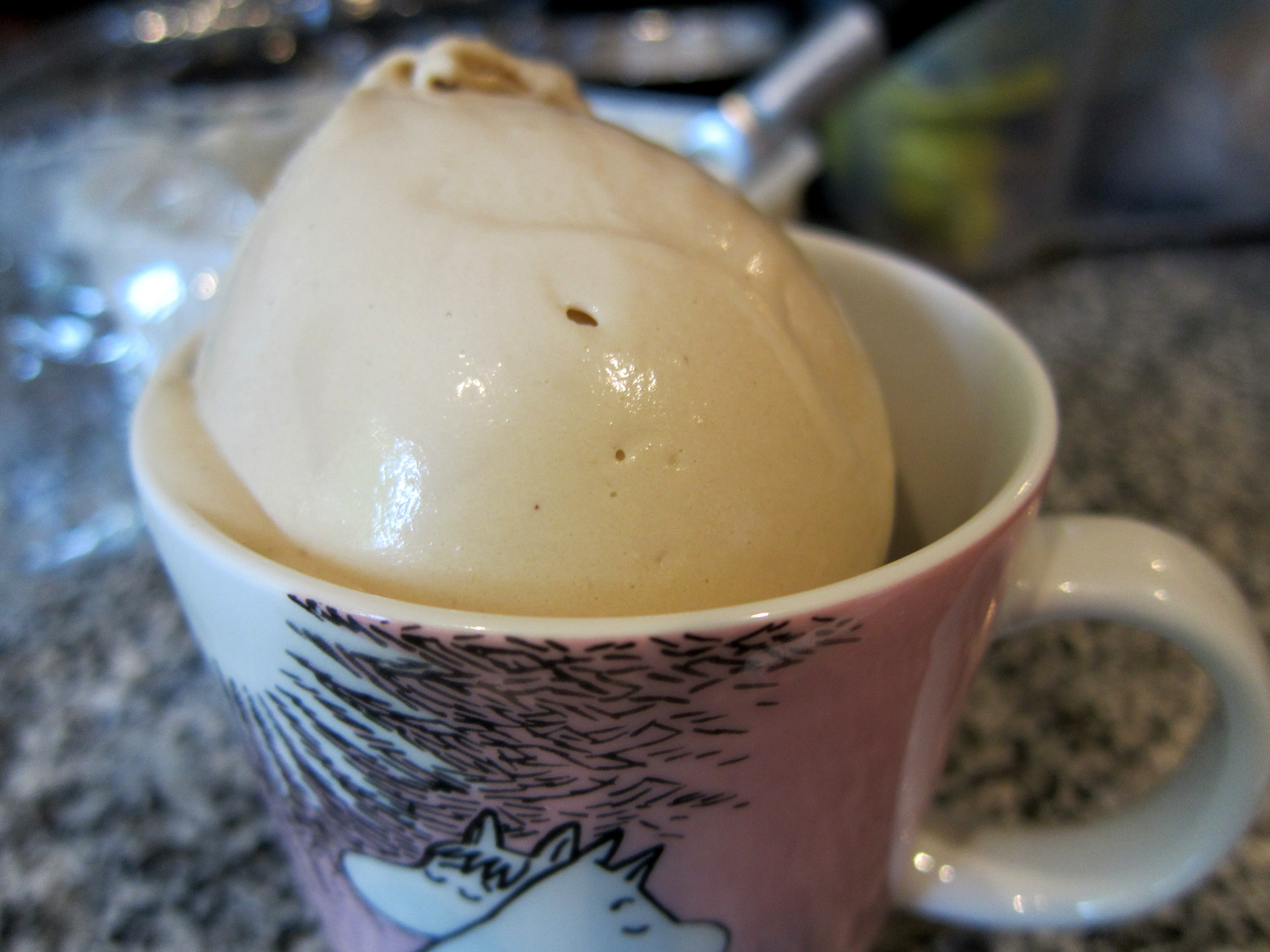 This exquisite flavour should be mandatory for all tea-lovers. But even those who are not overly fond of tea should give this elegant ice cream a try. The characteristic Earl Grey-flavour, with its bergamot and citrus, combines perfectly with the reliable gelato base and virtually blooms in the frozen context. Despite being mainly composed of milk, the ice cream also scores high in terms of consistency and texture, producing a smooth, elegant and delicious overall result.

No need to wait for proper tea-time: Grab a few tea-bags and get ready to infuse!