Saffron – the world’s most expensive spice – lends its exquisite flavour(s) to this frozen Christmas dream in noble yellow!

Saffron has been know to, and appreciated by man for thousands of years, and its culinary use in Sweden can be traced back to, at least, the Middle Ages. But saffron’s widespread popularity as a particular Christmas spice is a Swedish tradition that only began towards the end of the 19th century, when the baking of the still enormously popular saffron buns (‘lussekatter‘ or ‘lussebullar‘) began in earnest. And this ice cream takes its inspiration from these saffron buns, complemented with raisins marinated in the Swedish sweet and spicy mulled wine Glögg (another Swedish Christmas speciality – check to see if you may find a bottle at your local IKEA!). 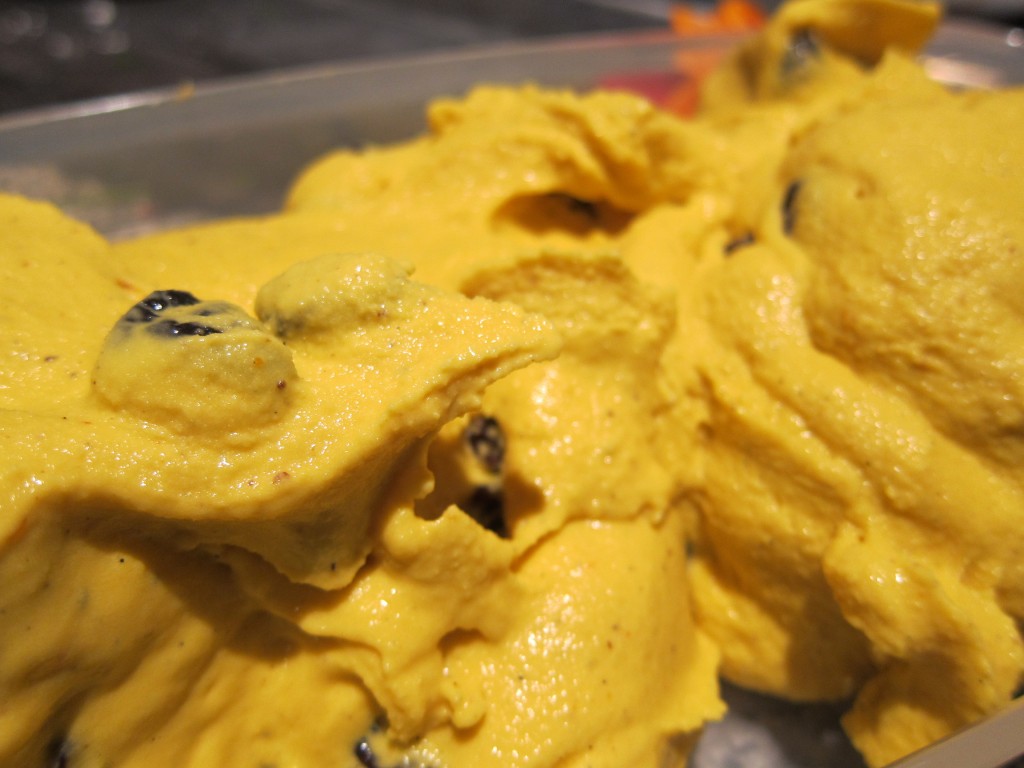 Much can be said about saffron: Did you, for instance, know that almost 1 kg (2.2 lb) of saffron crocus flowers is required to produce just 10 grams of dried saffron? Shopping for saffron will tell you just exactly how expensive it is, but luckily even very small doses go a very long way!  Saffron is also toxic, so a standard recommendation is to stick to maximum 1.5 grams per day. Over 5 grams could be dangerous, and amounts in excess of 10 grams even lethal!

But in human history, saffron has been cherished not only for its flavour(s) and colour-dying qualities. Historically, its main claim to fame was based on its purported medical qualities … and its legendary power as an aphrodisiac! 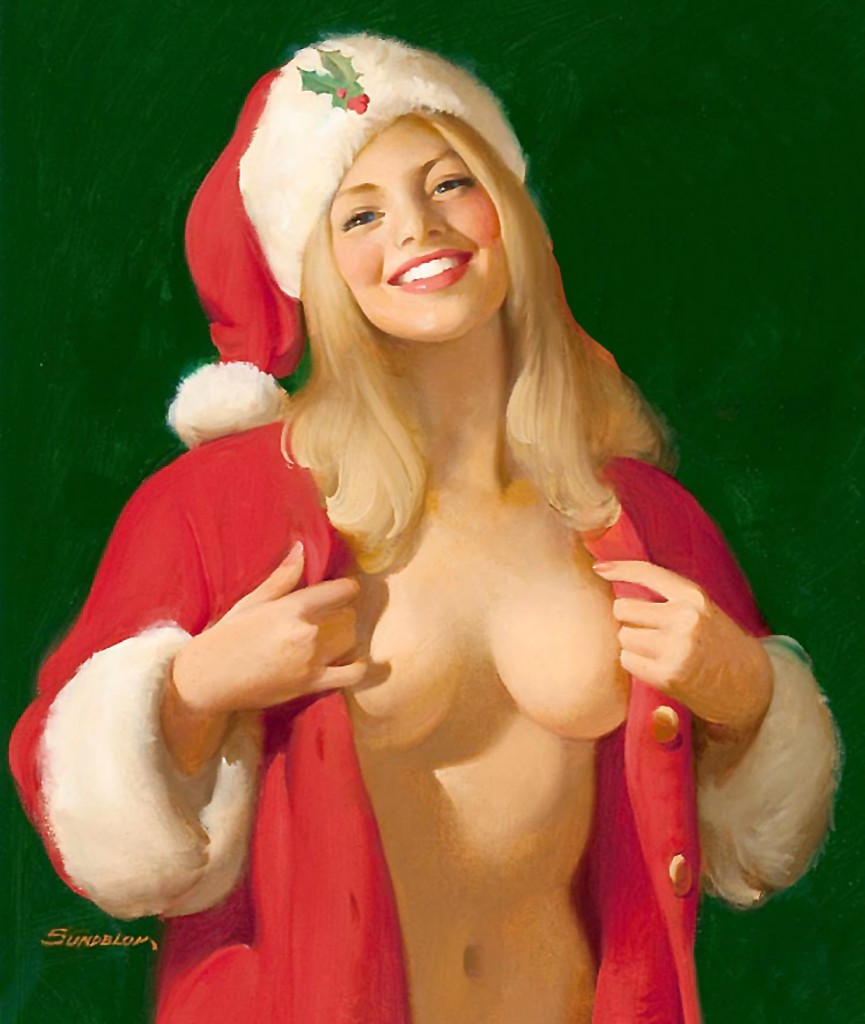 Saffron has long enjoyed a reputation as a powerful aphrodisiac – a claim that actually seems to be somewhat substantiated by modern research. Could this possibly be a secret reason for its Scandinavian popularity?

But we will leave all that for now. Let me just add that you should use genuine, good-quality saffron for this recipe, and not skimp on the required amount (lesser quantities will provide the right colour but sadly not the fantastic full saffron flavour). Let me also add that the amount required for the recipe should not cause any adverse medical problems whatsoever.

And whether saffron’s aphrodisiac effects should be welcomed into your lives, I leave fully up to you, dear adult readers:)

Choosing a base – versatile Sicilian gelato!

Avid readers may remember that I have posted another recipe on Saffron raisin ice cream, made with a classic custard-base. But this time, I decided to do without any eggs, instead using the Sicilian gelato-base. This particular base, which uses starch to stabilise the ice cream and provide consistency, almost always seems to guarantee excellent, final results. And this turned out to be the case also this time.

Returning visitors may already know of my love for starch-based ice cream, so I will try to keep the general praise short here. It suffices to stress that starch-based ice creams (a) do not require any eggs, (b) are very easy to prepare (and almost fail-safe), and (c) provide great consistency (leaning towards the “chewy” side) while faithfully promoting the particular main flavours. So, no hesitations – give crema rinforzata a chance!

The raisins should ideally soak in the mulled wine (for Swedes, that would mean “Glögg”, which is sweet and typically spiced with cinnamon, cardamom, ginger and cloves) for at least a few hours, and preferably even over the night. Not only will the alcohol (and the spices therein) add more flavours to the final ice cream – the alcohol will also affect the freezing point of the ice cream, and help to create a softer, more scoopable  ice cream.

A word of warning, though – be careful not to add more alcohol than set out in the recipe! Too much alcohol, and your  ice cream might simply never freeze properly. 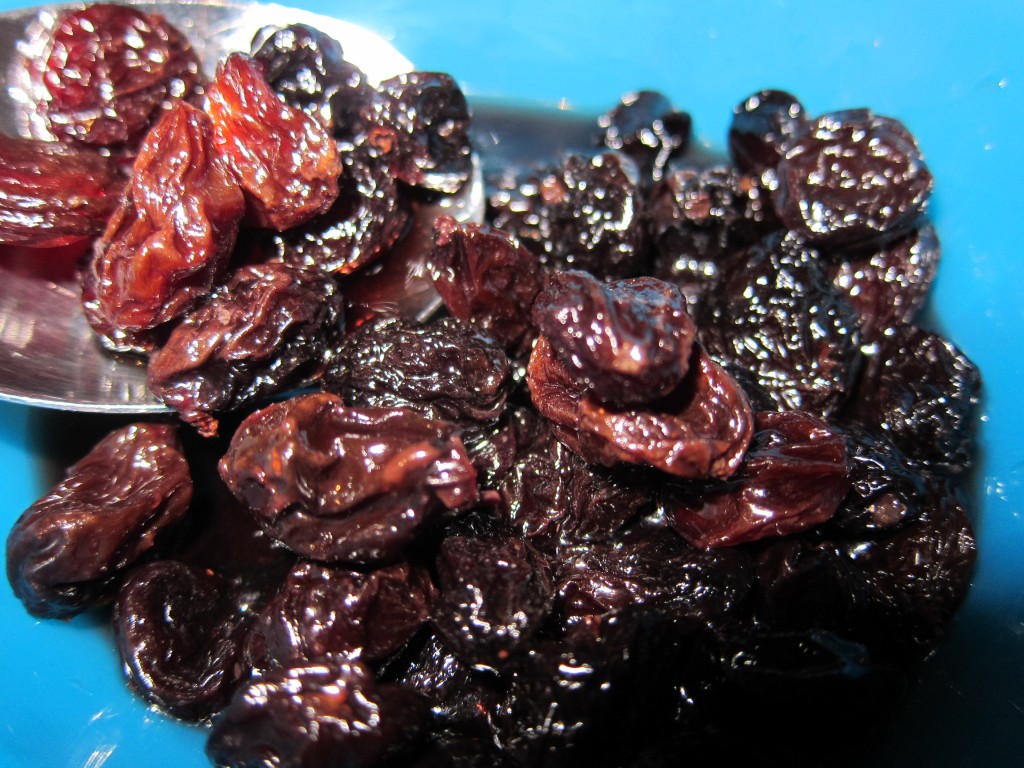 In case you do not want to add any alcohol, you could test soaking the raisins in some suitable, non-alcoholic beverage! Even Glögg comes in alcohol-free varieties these days, and fellow Swedes could also try using the “Julmust” soft drink. Yes, you might even consider soaking the raisins in Cola.  Just remember that if you do not use any alcohol, it becomes more important to add the inverted sugar (and even a little extra that should go into the stuff you use to soak the raisins), particularly if you like a softer, easier to scope final result.

While Sicilian gelato does require cooking on the stove, it is so much easier to prepare than typical, egg-based custard ice cream. And this is because you are working with starch, not eggs. Firstly, this excludes the risks of inadvertently creating scrambled eggs. Secondly, there is no need to carefully monitor any particularly specific temperatures when heating the base – starch only needs about 50°C (122° F) in order to begin to  thicken (“gelatinize”), and behaves rather robustly on higher temperatures (still, the base should preferably never boil).

Before turning our full attention to the cooking of the base, we should prepare the mixture of cold milk and starch in a separate bowl, to be set aside and later added to the heated ice cream base. 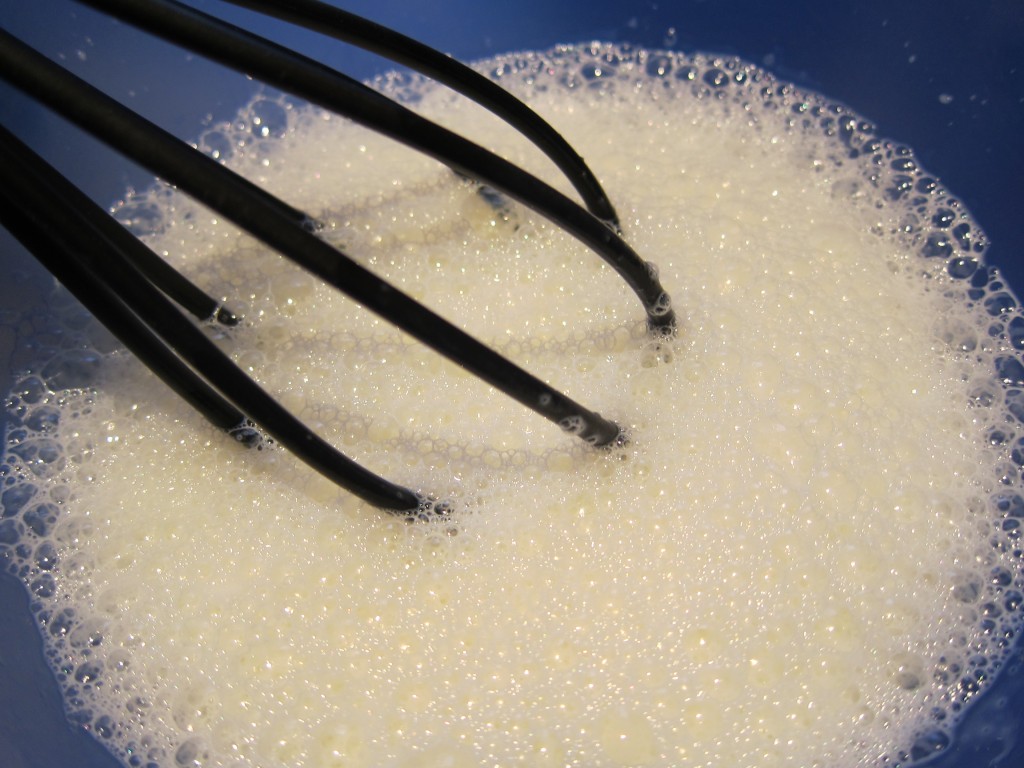 Dissolve the starch in some of the cold milk to prevent future lumps. Notice the foam – a typical sign of starch being present!

Since heat releases the saffron’s flavour essence, we can actually put both the saffron and (almost) all of the other ingredients together in a sauce pan directly on the stove  (save for that milk, in which we just  dispersed the starch).

Whisk it all together and bring to steaming hot/almost-boil. Then add that milk with the dispersed starch, and continue to whisk regularly. 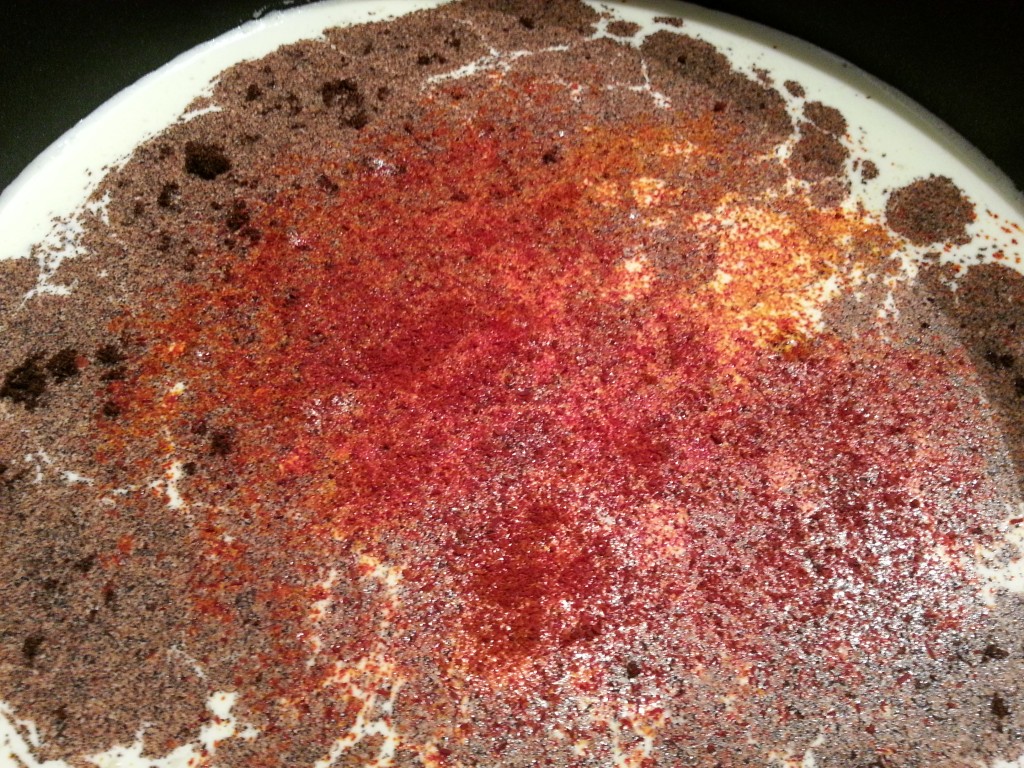 A close-up of a strange planet in space? No, just the spice-covered surface of the ice cream base just before the actual cooking on the stove begins. Notice the saffron’s red tint – one of the signs of high quality to look out for! This particular saffron came from Iran, the world’s largest exporter.

As just noted, starch only needs about 50°C (122° F) in order to begin to  thicken. But to get the most out of the starch, we should still bring our ice cream base up to at least about 70°C (158° F). This process is, however, fairly fail-safe, does not really require any actual thermometer-checking but merely some regular whisking  for a few minutes – just make sure that the base does not boil, that the starch has been properly dissolved, and that the milk does not get scorched (burnt) while the base thickens somewhat. All in all, the whole cooking-part might well be over in less than ten minutes. 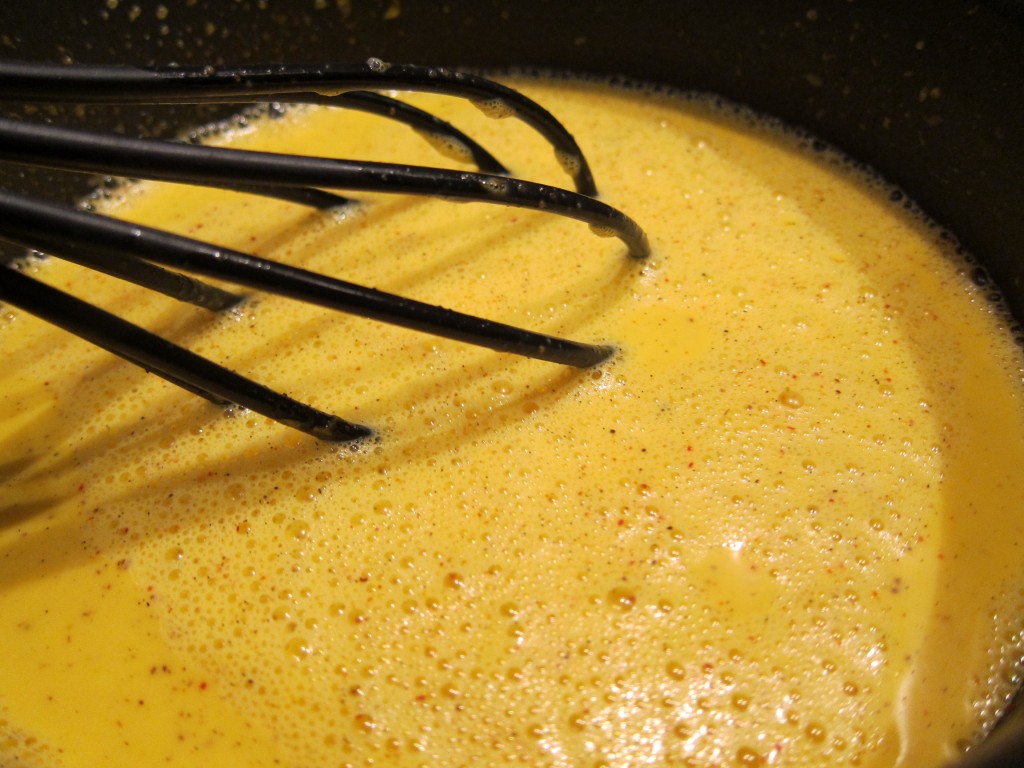 Saffron ice cream base in the making. The starch (dissolved in some cold milk) has just been added. A few more minutes, and the thickening should typically begin.

Once the base has thickened somewhat and all possible flavour-traces of the starch has disappeared, it is time for the cool-down.  As always, this should be done as quickly as possible, for instance in a kitchen sink filled with cold water and ice cubes. Once cooled down, the base should be chilled further in the refrigerator before the churning.

Or use the outdoors for both the cooling down and the chilling, local weather conditions permitting;) . 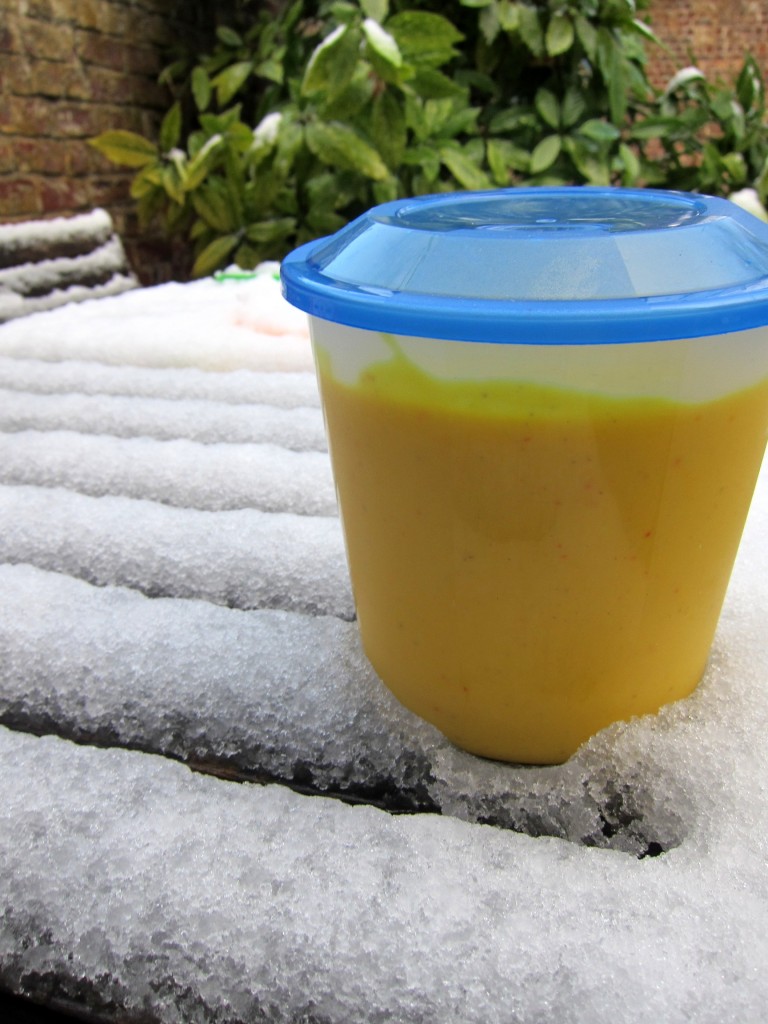 What better way to cool down and chill a Christmas ice cream base?

When the ice cream base has chilled for a few hours at least, churn it in your ice cream machine!

In case you have no ice cream machine, you should know that Sicilian gelato-bases tend to be excellent for still-freezing (i e, preparing your ice cream in the freezer). 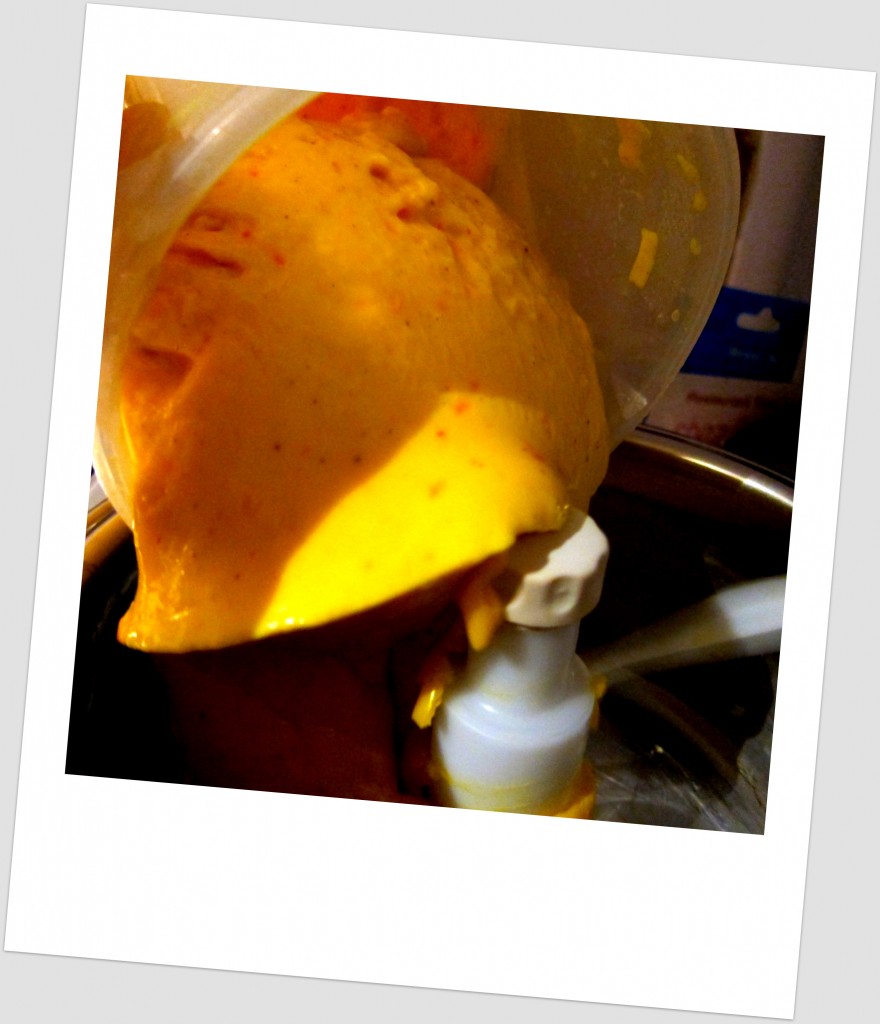 The consistency of ice cream base on starch is often quite thick even before the final churning has begun. This also makes Sicilian gelato a perfect choice when you do not have access to any ice cream machine. 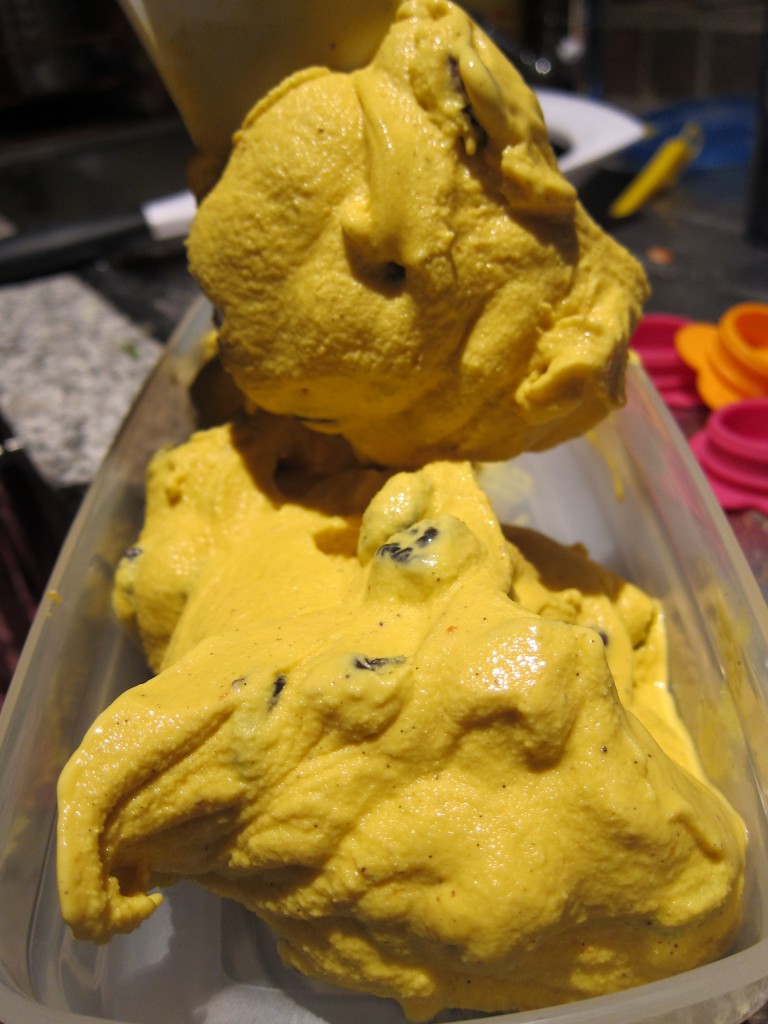 Once the glögg-soaked raisins have been added to the ice cream, the freshly churned ice cream could either be enjoyed immediately, or given some time in the freezer to solidify further before serving. 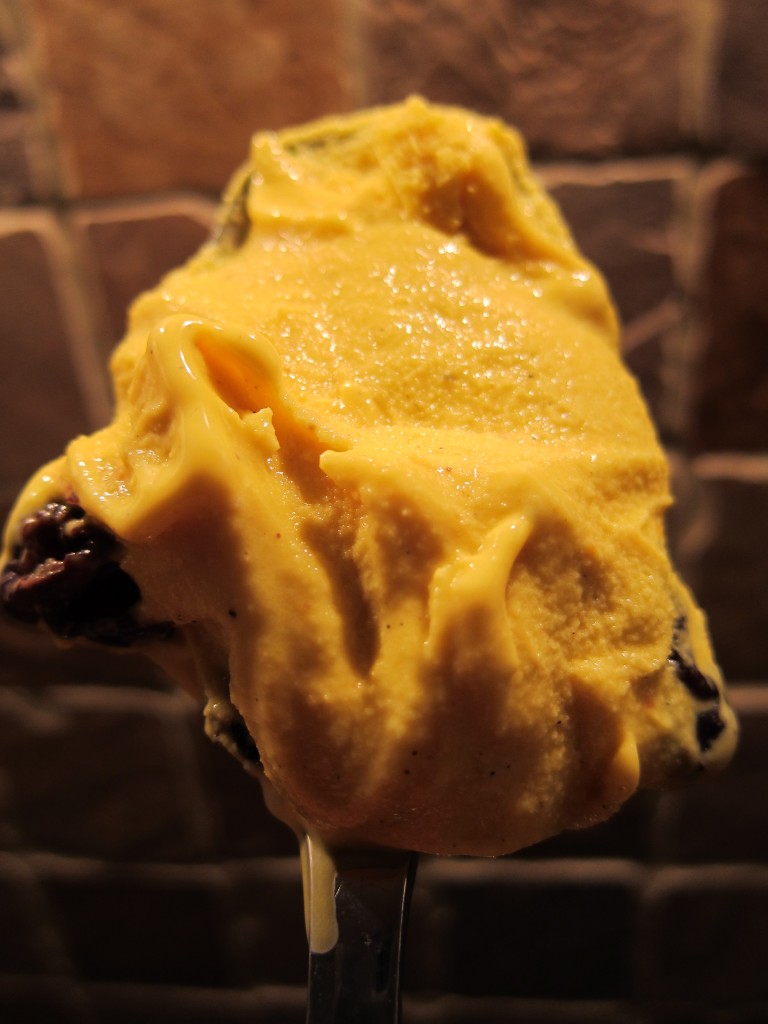 A spoonful of freshly churned Saffron raisin ice cream. Despite the melting impression one might get from this image, the ice cream has – even at this stage – a remarkably good consistency.

You do not need to be a Swede to enjoy this delightful flavour combination!  Anyone who loves  good ice cream and the elegant, refined flavour of saffron should give it a try! Saffron and raisins were a delicious combination already when prepared on a custard-base, but I must conclude that this new attempt strikes me as possibly even tastier!

“Like saffron buns in ice cream shape!”, as a good friend put it, while helping himself to yet another portion.

Basing the ice cream on starch ensures a very reliable consistency, and allows full reign for the saffron’s many alluring flavour nuances. The pleasant, added sensations provided by the raisins soaked in mulled wine add complexity and bring the overall effect even higher. And all our adult friends who have tested the ice cream certainly seem to agree – every batch I have churned and placed on the table lately just seem to disappear in no time at all  (in the photo below, however, I finally managed to capture what the ice cream looks like after a night in the freezer).
So whether you are looking for ways to improve your love life or just like to relish a delightful ice cream – Saffron ice cream stands ready to help you out! 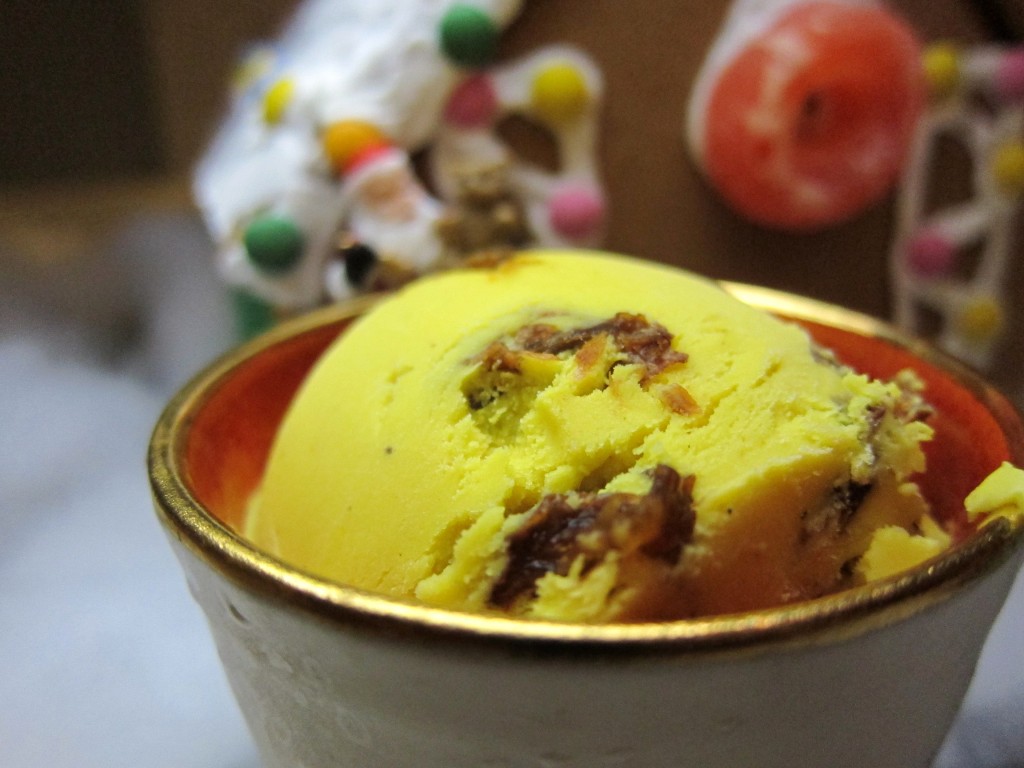 Saffron raisin ice cream, having firmed up further after a night in the freezer.

Print
Scandinavian Saffron raisin ice cream
By: Anders@icecreamnation.org
Exotic and alluring saffron, in the company of delicious raisins, soaked in sweet, spicy mulled wine. This exquisite ice cream - made on a reliable base of eggless Sicilian gelato - ranks high amongst my favourites. It can easily be prepared even without any ice cream machine.
Ingredients
Instructions
No ice cream machine? - No problems: Just still-freeze in your freezer!
Notes
If no alcohol is used, the ice cream will freeze firmer. Soak the raisins in suitable non-alcoholic drink (soft drink, alcohol-free mulled wine ...) and add 1-2 extra tablespoons of inverted sugar to the ice cream base to make it softer. If you cannot find any mulled wine but still like the idea of raisins soaked in alcohol - go pirate and use about 3 tablespoons of rhum.
Wordpress Recipe Plugin by EasyRecipe
3.1.09
Share