“Fifteen men on the dead man’s chest– Yo-ho-ho, and a …  a scope of Coffee Rhum & Walnut ice cream?”

Admittedly, it seems extremely unlikely that ice cream ever was part of classic Caribbean pirates’ dietary habits. But Rhum surely was! So if ice cream making had been an actual possibility in those days, I  feel pretty confident that this frozen combination of coffee, Rhum and walnuts had been highly appreciated by the Buccaneers. But even if you are no pirate, and provided that you don’t have anything against Rhum, you are also likely to be pleased! 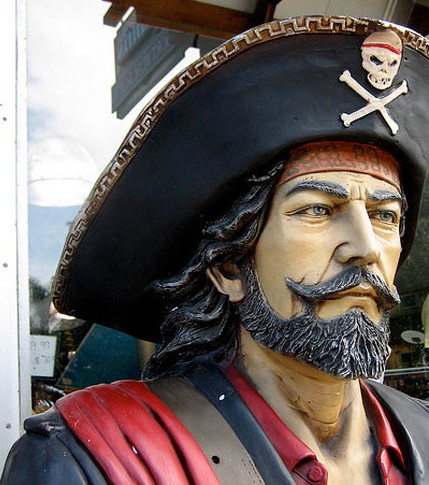 “Fifteen men on the dead man’s chest– Yo-ho-ho, and a bottle of rum … to flavour my ice cream!” Since even the classic pirate song is fictional, we could as well imagine that the Golden Age of piracy also offered the technical possibilities to create ice cream.

Different recipes for this flavour combination have been sailing the internet for several years.  In my version, I aimed for simplicity and was rewarded with an elegant, adult flavour of surprisingly (but pleasantly) light overall character.

Dealing with the nuts

When dealing with nuts in ice cream, the golden rule is to toast them before adding them. Not only does the toasting bring out more flavour from the nuts, it also helps to prevent them turning soggy once added to the ice cream.

Luckily, it is very easy to toast nuts: Pre-heat the oven to 175 degrees C (350 degrees F), then spread out the nuts in a single layer on a baking sheet and put them in for about 10-15 minutes. Shuffle and flip the nuts after about five minutes to ensure an even toasting. Also check to make sure that the nuts do not get burnt – they are done when they begin to turn nicely golden brown and begin to smell toasted.  At this stage, remove them from the heat and let the nuts cool down. Then cut them roughly in not too small pieces and, preferably, put those to chill in the refrigerator.

The nuts will be added to the ice cream base later, at the very end of the churning phase. 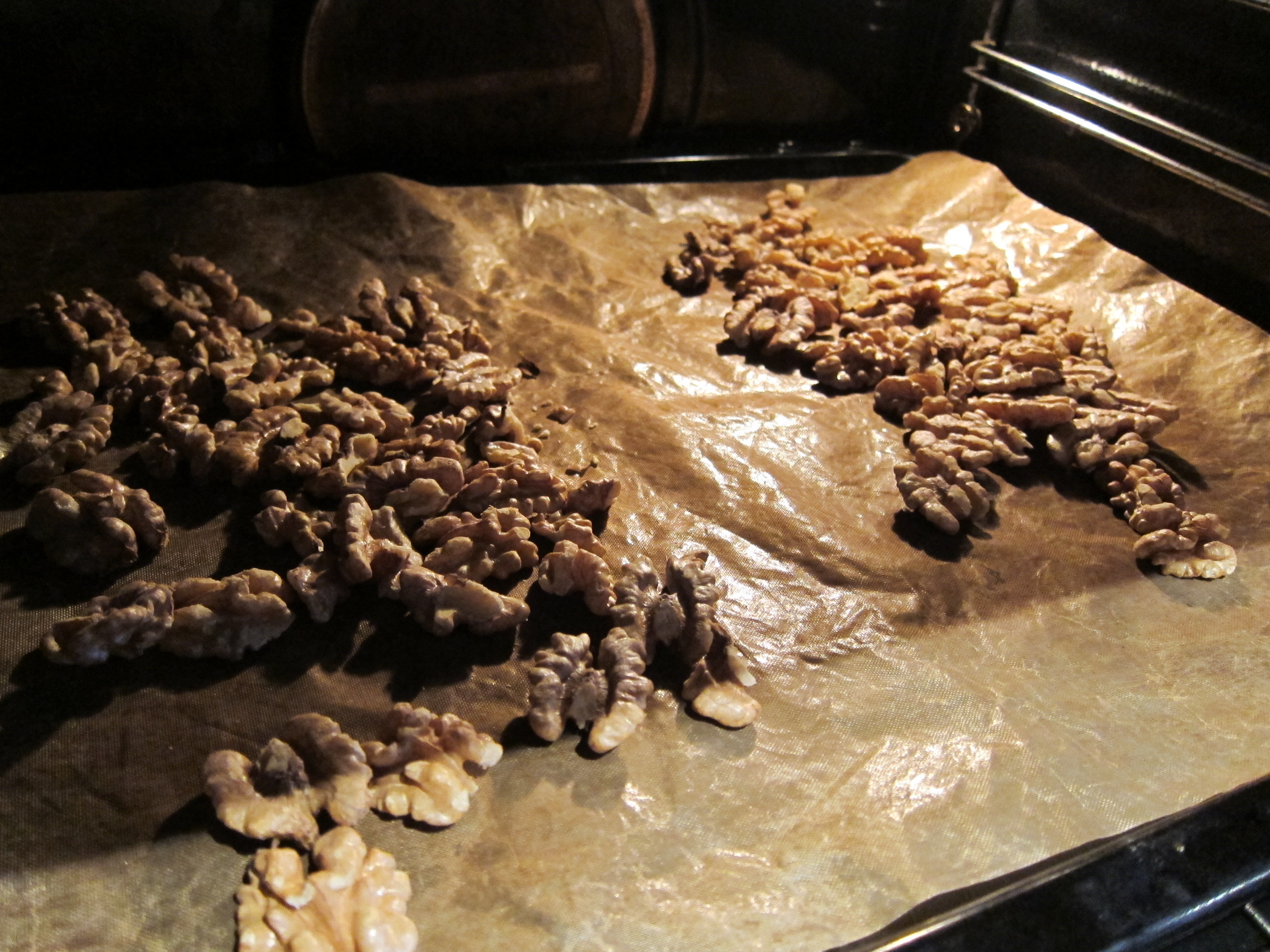 Preparing the ice cream base

Several of the classic ice cream bases would work well with our nice main flavours. However, I decided to opt for maximum simplicity – using the American/Philadelphia style base. In other words, this recipe is mainly a matter of whisking together the different ingredients (almost) straight from the refrigerator, and with no eggs required.

Still, the proportion of cream is less than what is typically used, giving the final ice cream a pleasantly lighter, less heavy-on-cream character.

Normally, this relative lack of fat to help build up the ice cream would have been likely to create an unpleasant iciness. But thanks to the Rhum, the balance between pleasant and unpleasant iciness remains safely tilted towards “pleasant”! Why? Practically speaking, because the alcohol prevents the ice cream from freezing too firmly, thereby avoiding the large ice crystals that otherwise would have been likely to form.

In a nod to my fictional pirates feasting on ice cream, I chose to use raw sugar as principal sweetener. Sometimes, I do not bother to heat simple sugar syrups (sugar tend to dissolve quite well in water anyway) but particularly because of the coffee, I recommend a gentle heating-up when combining the coffee, the sugar and the water. But there is no need to reach boiling temperature – as a maximum, stick to what would be a good, acceptable temperature for brewing coffee! 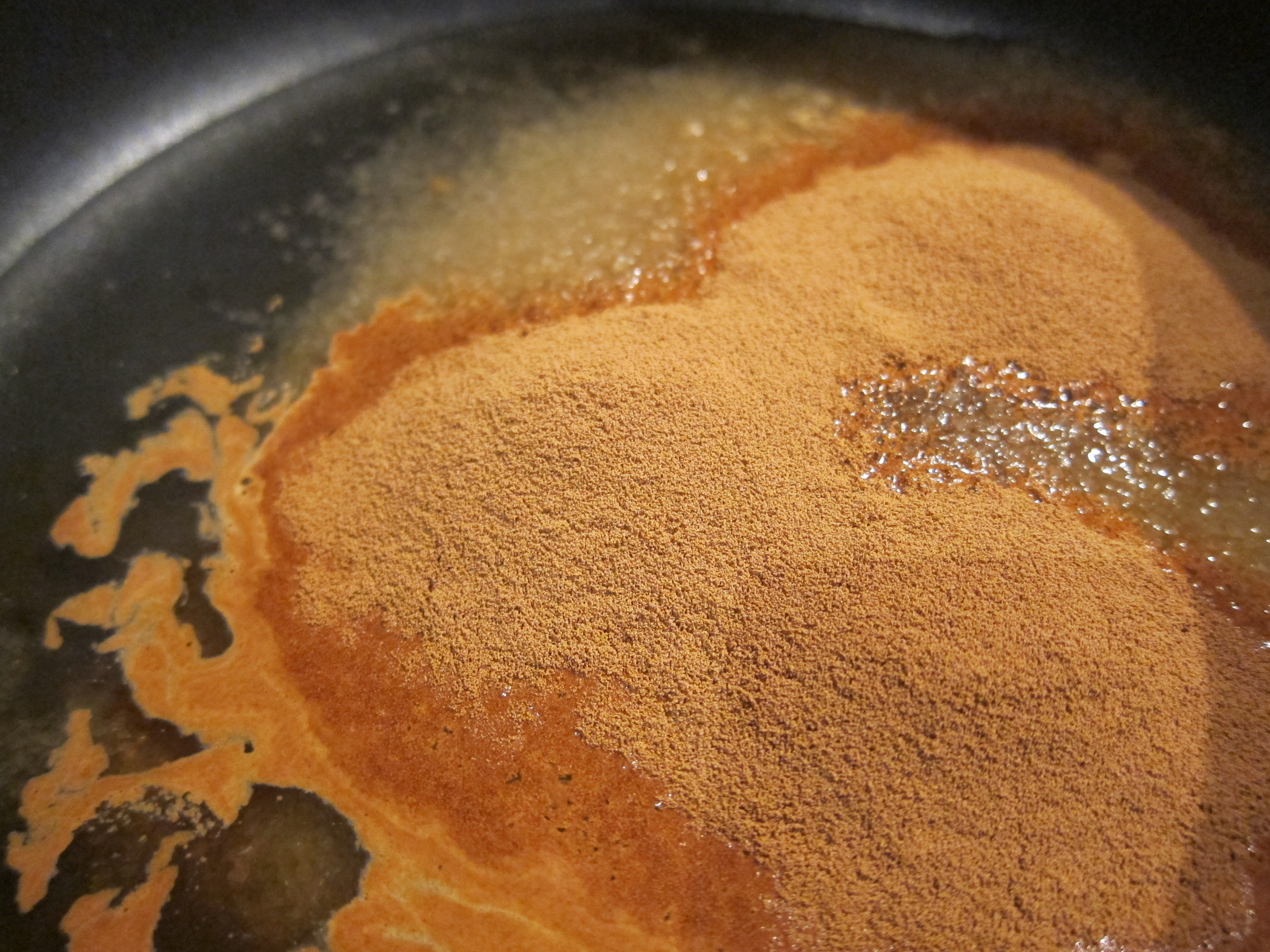 An aerial view of Treasure island? No, just the raw sugar, the coffee and the water about to be combined into a type of light coffee syrup – the first step towards the ice cream base.

When the coffee syrup has cooled down, it is time to add the remaining flavours – vanilla, salt and Rhum! If you like, you could also add some inverted sugar (such as honey, Agave nectar, corn syrup …). There are two possible good reasons for adding some  – either if you should consider that the overall mixture requires further sweetening [the base recipe is not overly sweet, so follow your personal sweetness-preferences], and/or if you plan on excluding the Rhum. In the latter case, the inverted sugar would help the ice cream not to freeze too firmly; something otherwise taken care of by the alcohol.

Which Rhum did I use?  Havana Club – genuine, good quality Cuban Rhum actually – very suitable for a pirate ice cream! But any good quality, (preferably dark) Rhum should work fine!

At this stage, the only thing left to do is to add the milk and the cream! 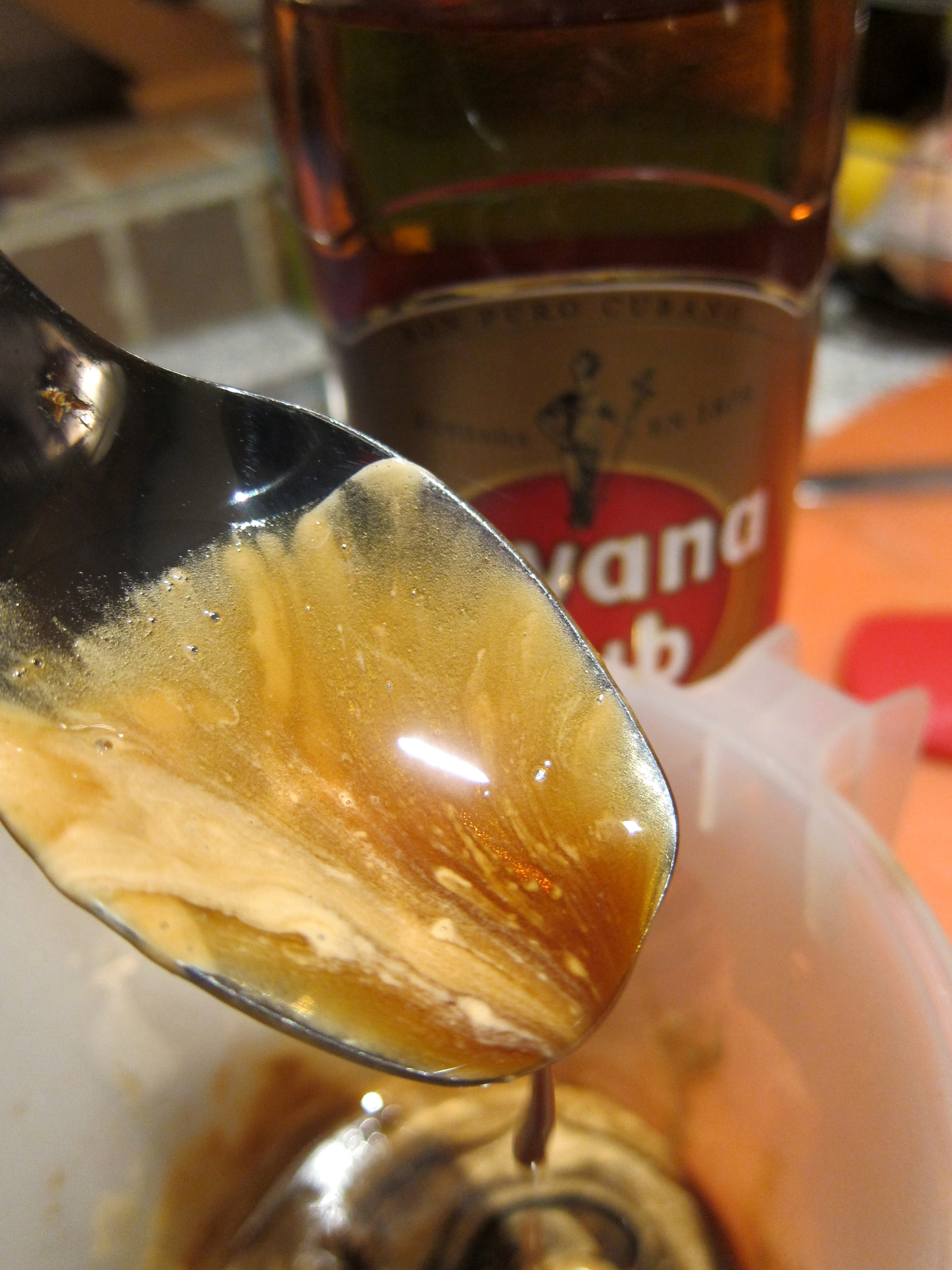 Towards the very end of the churning, add the roughly chopped pieces of toasted walnut which now should be suitably cooled down. 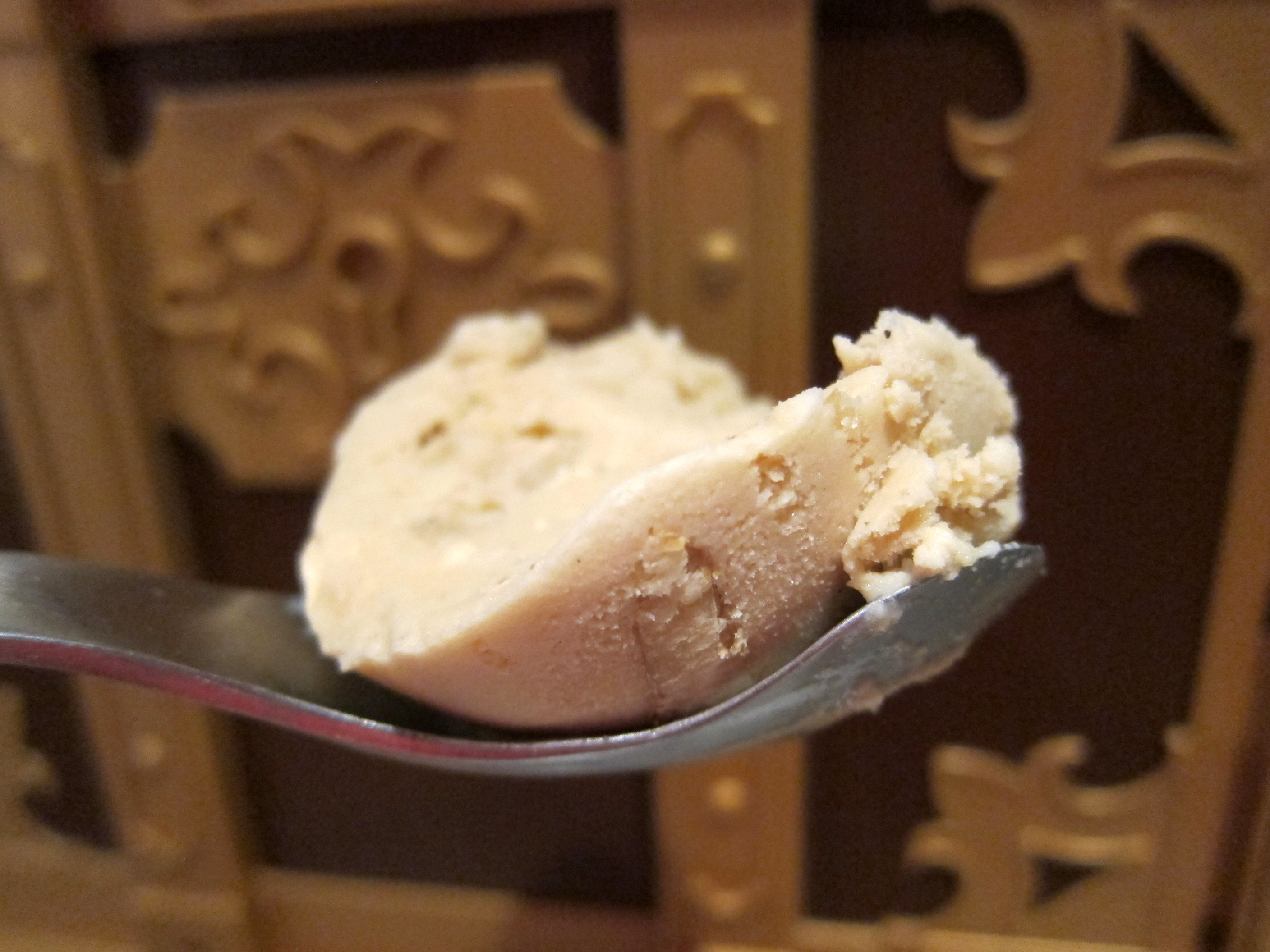 American style ice cream has many good qualities, but usually tends to rank (relatively) low on the scale of “ice cream refinement”. While the base excels when combined with fruits or cookies, the Italian and French type-ice creams often come across as more elegant and sophisticated. And there are many who tend to dislike the high amounts of cream that usually define Philadelphia-style ice creams.

This particular combination, however, comes across as surprisingly light and refined, and should be perfectly presentable also to more discerning (adult) ice cream connoisseurs. 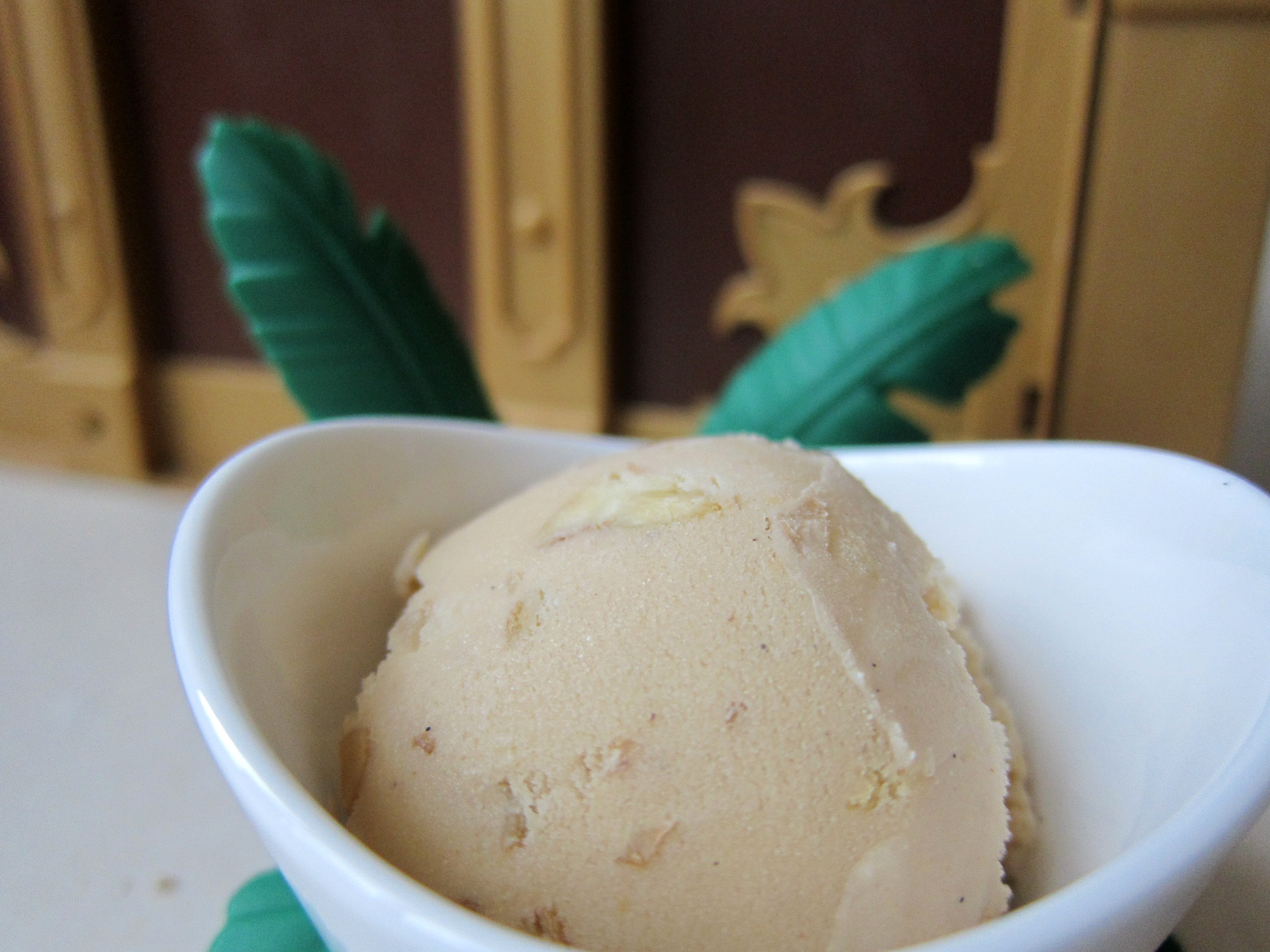 The flavours of dark coffee and nutty walnut marry beautifully with the distinct, aged background flavour provided by the Rhum: one of those combinations that somehow come out as more than the sum of its individual parts!

And the rich, adult overall flavour actually improves when stored for a while in the freezer – I certainly found the ice cream to have “matured” in flavour considerably after a night in the freezer, and would suggest that you resist the temptation of eating it straight after churning. So even if you cannot resist tasting some straight after churning, do remember to set aside at least some of the ice cream for future  tasting – because freezing it further will improve its delicate overall flavour!

Print
Coffee Rhum and Walnut ice cream
By: Anders@icecreamnation.org
A pleasant, rather light and refined adult flavour that only gets better after spending some extra time in the freezer!
Ingredients
Instructions
Wordpress Recipe Plugin by EasyRecipe
3.1.09
3.1.09 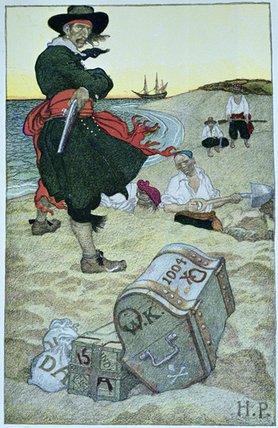 What we have in the chests? Well, mainly walnuts, coffee and Rhum actually.