Born of blood from a princess, considered to be an aphrodisiac since Pre-Columbian times, and the second most expensive spice in the world (after saffron).  In the world of ice cream, no other flavour can compete with vanilla’s global popularity as the symbol for  “typical ice cream”.

But where does vanilla come from? And why is genuine vanilla so expensive?

Genuine vanilla comes from Vanilla orchids (Vanilla Planifolia being the most commonly grown species).  These orchids are vines, and need to cling on to something (such as a tree or a pole) in order to grow. The fruit of the orchids is mostly referred to as “vanilla beans”, and it is from these we receive pure vanilla. 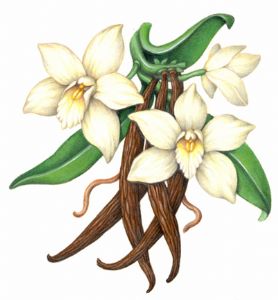 The blood of the Vanilla princess

Vanilla originates from South America, and was first cultivated by the pre-Colombian Totonac people in present-day Mexico.

According to the myth, the Vanilla orchid rose from the blood of the beautiful Princess Tzacopontziza [Morning Star]. The princess had been forbidden to marry by her father, who instead had dedicated her life to that of  religious service to the goddess of  crops and subsistence, Tonoacayohua.

As could be suspected, a young man then appears in the story and falls in love with the princess. Eventually, the lovers flee to the forest. But there, they are captured and beheaded by the angry priests of the goddess.

Where the blood of the princess touched the ground, the vine of the vanilla orchid started to grow (clinging to the bush that had risen from the blood of her lover). The awed Totonacs named the flower Caxixanath, or  Xanath – “the hidden (or mysterious) flower”. 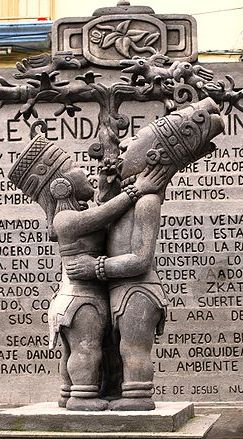 Vanilla, the Aztecs and the Spanish Conquistadors

Later in history, the Totonacs were conquered by the Aztecs, who began using vanilla to flavour their cacahuatl (a drink made from water, honey, ground corn and cocoa beans). The Aztecs named the vanilla bean “Black Flower”, believed that vanilla had medical properties and considered it to be an aphrodisiac. Not interested in producing vanilla on their own, the Aztecs forced the Totonacs to pay them tax in the form of vanilla beans.

In the early 16th century, the Spanish Conquistadors under Cortez had both cocoa beans and vanilla beans sent back to Europe.

Apart from being greatly appreciated as an aphrodisiac, the earliest European use amongst the rich  and the mighty who could afford it seems to have mimicked the Aztec ways (by mainly using vanilla as a flavour to chocolate).  Soon, however, the versatility of vanilla on its own was being put to culinary (and medicinal) use in many other ways.

Vanilla became popular, and Mexico became the sole exporter of the fascinating, exclusive spice. It would take another 300 years and several failed attempts to grow and harvest vanilla outside of Mexico, until the discovery of the need to (hand-) pollinate the flowers.

Madagascar, today’s largest producer, produces Madagascar Bourbon vanilla (and no, Bourbon has nothing to do with whiskey but refers to the Bourbon Islands, of which Madagascar is one).

Indonesia is the second largest producer.

After these two vanilla giants,  Mexico comes in as a (very) distant third. Tahiti is number four.

A few words about synthetic vanilla

Despite (or rather because of) vanilla’s great popularity, it has been estimated that the vast bulk of all “vanilla products” today are flavoured not with vanilla, but with artificial vanillin. Pure vanillin is one (albeit one of the most prominent) of the about 250 or so flavouring components of genuine vanilla.

For economical reasons, however, synthetic vanillin is often produced from lignin (an aromatic chemical compound mainly derived as a by-product from wood pulp). It can also be made from guaiacol, which is a coal tar derivative.

Leaving the synthetics, would you like to make your own genuine vanilla extract?  Try following the instructions on the bottom of the page here.

Why genuine vanilla is so expensive

It is mainly because of the long and very labour- intensive preparations required to produce the vanilla beans we find in the shops.

To get vanilla beans, the Vanilla orchid’s flowers first need to turn into fruits. This will not happen unless the flowers are pollinated. If you happen to cultivate your Vanilla in  a specific part of Mexico where the tiny Melipona bees live, they will take care of this.  Everywhere else in the world, however, you will have to pollinate the flowers – by hand!

To grow ripe vanilla beans takes about 9 months. Then, the beans need to be harvested – by hand!

Once harvested, ripe but raw vanilla beans require curing in order to attain their typical vanilla flavour.  This process takes about 6 months. Curing is a bio-chemical process, with enzymes hard at work to release the flavour components in vanilla. Highly monitored fermentation and drying of the vanilla beans is an important part of this process.  Several different curing methods exist;  some are described here).

If you are interested in the vanilla production process, I really liked these posts by Courtenay Beinhorn Dunk (Spicelines) on her visit to Veracruz, Mexico!

Also, do not miss this short informative and entertaining film about fair trade vanilla production in Uganda (by Bridge the Gap TV and Ben & Jerry’s):