What do almonds and coffee have in common? Obviously, both come from plants. But they also enjoy widespread popularity among humans since time immemorial (for almonds, at least: coffee-drinking history supposedly began around the 15th century). So why not combine these two crowd pleasers into one ice cream?

Oh – and we will also take a look at my favourite sugar substitute: Birch sugar (a k a xylitol). 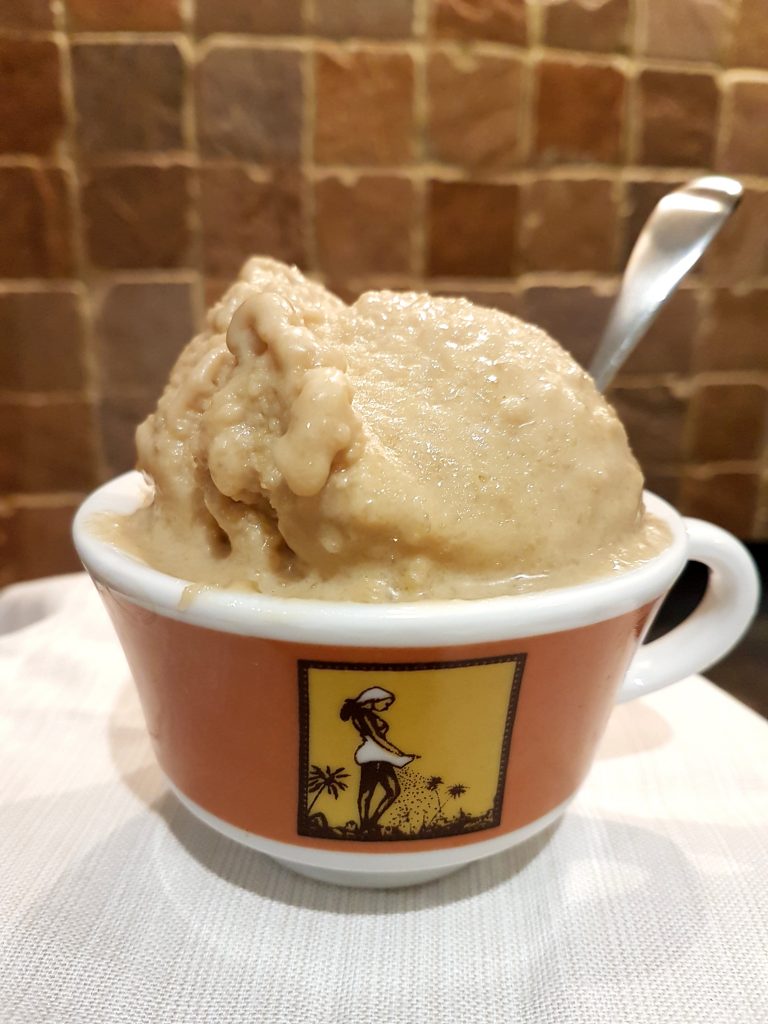 Mmm … who knew that coffee and almonds would be such a tasty combo?

An unfamiliar combination of flavours

You may feel doubtful about combining almond and coffee (at least in an ice cream). I felt the same … until I happened to pass a small shop selling bio-dynamic stuff a few weeks ago. It did not take me long to focus in on a  shelf with various (almond-based) marzipan goodness, where I was surprised to find a small package with coffee-flavoured marzipan. I looked at the package in slight disbelief until curiosity (as usually is the case) took over.

To my great surprise, the flavours actually went very well together!  And since I love ice cream and am addicted to coffee, you can guess what I had to try when I came home that day …

The base – Marzipan ice cream … with a coffee twist

Wishing to stay true to the basic marzipan-base flavour, I basically turned to my trusty marzipan ice cream recipe. As you will see, it is rich both in almonds and in sugar but for a reason: reducing either will unfortunately really change the character of the ice cream (and not for the better). This means that the high amount of solids (= the ground almond) will give the ice cream a slightly chunky character, and that the result will be sweet (just like marzipan itself, although the coffee admittedly makes it less pronounced).  Neither of this should stop you from enjoying the ice cream!

As for the coffee, I would suggest that you use a quality brand of instant coffee (like, of the espresso-type). 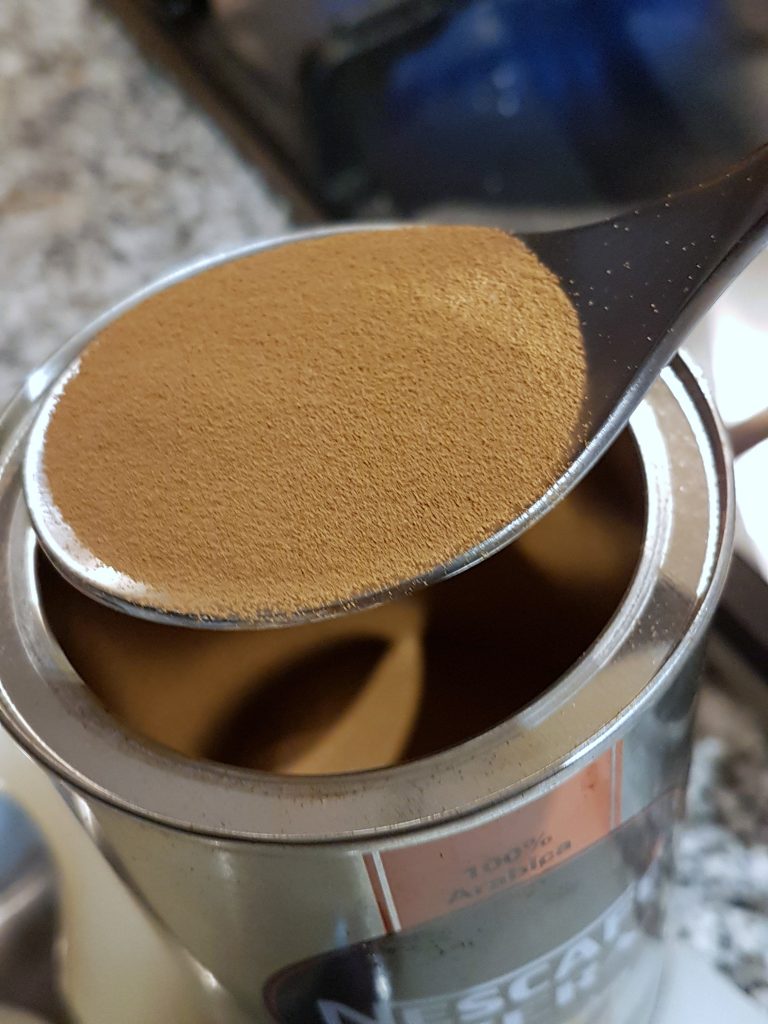 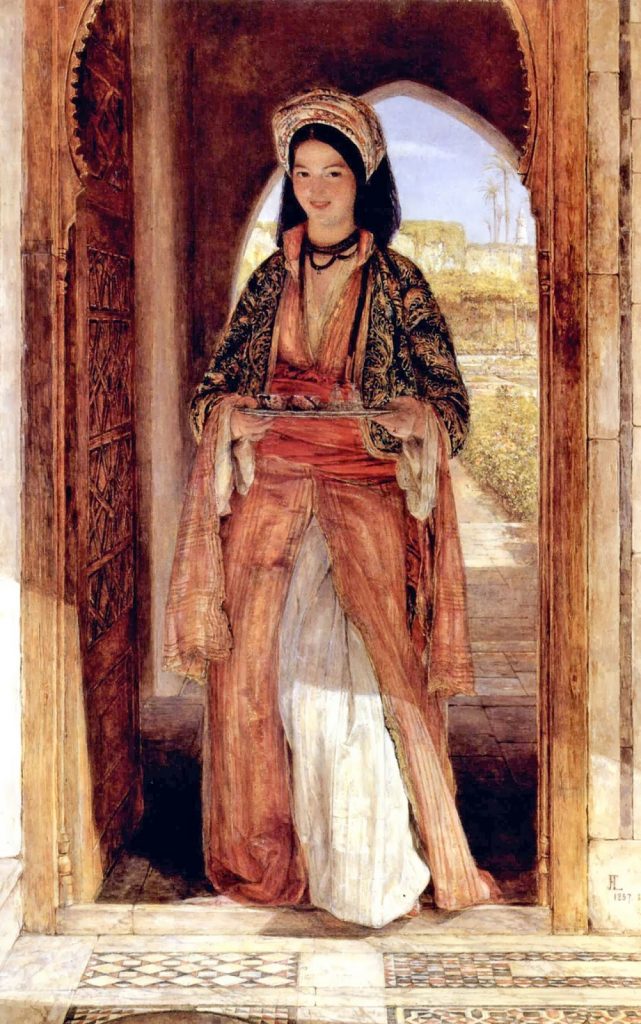 Coffee drinking is believed to have originated in Sufi monasteries (!) in Yemen in the 15th century. From then on, the addictive habit spread pretty quickly.

This recipe works fine with ordinary sugar. Should you, however, like to cut back on the sugar (or if you like to experiment with new ingredients), then may I suggest that you try replacing at least part of it with xylitol (birch sugar).

Birch sugar is the only sugar substitute which I have found that (a) not only looks like sugar but also tastes exactly like it (no strange after taste!) and (2) works really well in ice cream. 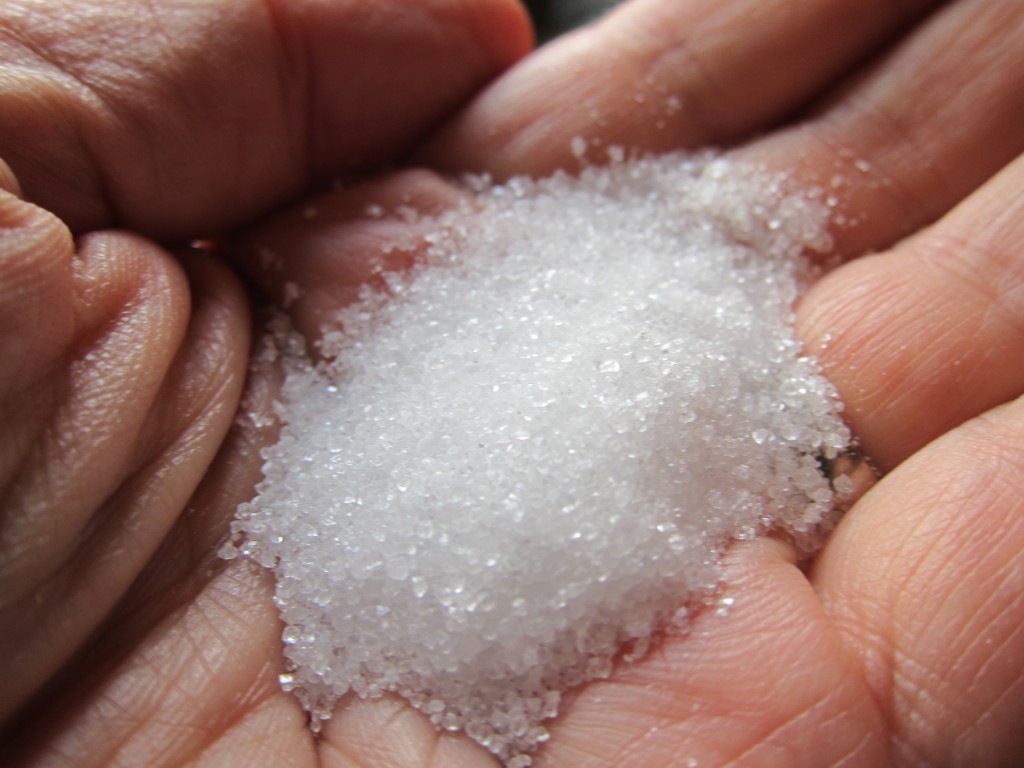 Looks like ordinary sugar, does it not? But this is Xylitol (a k a Birch sugar) – my clear favourite among sugar substitutes!

Unlike many other alternative sweeteners which give your ice cream consistency problems (= ice cream freezes brick-hard), xylitol is actually even better than ordinary sugar on lowering the freezing point, thus ensuring an even better scoopability than sugar would do.

Furthermore, xylitol is safe for diabetics, has a low-GI, contains about 40 % of the calories in sugar, and is not as readily taken up by the human gut as sugar anyway. Oh, and it is actually good for your teeth!

Yeah – it does sound too good to be true, right?

So, what are the drawbacks? Firstly, xylitol is rather expensive. Secondly, since human bowels do not break down xylitol as much as sugar, this can – for some people – eventually translate into certain discomforts (think flatulence, mild stomach ache and the likes). If consumed in moderation, however, most people will probably be in for negligible or no suffering.

Oh, and don’t feed your pets xylitol! For dogs, that could actually be fatal.

The actual making of the ice cream

Preparing the ice cream base is quite easy – instead of eggs, we will use a little agar agar to bind water and thicken the base. 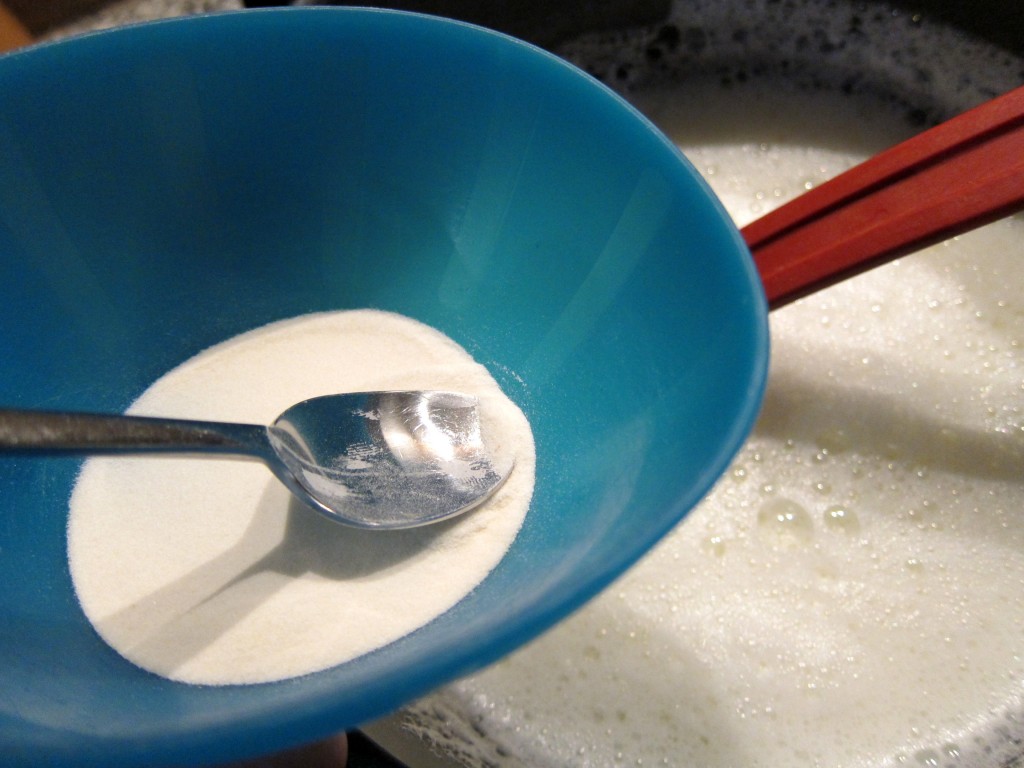 In short summary, grind the almonds and mix them with all other ingredients (save for the coffee powder), then bring to an almost-boil and add the agar agar. 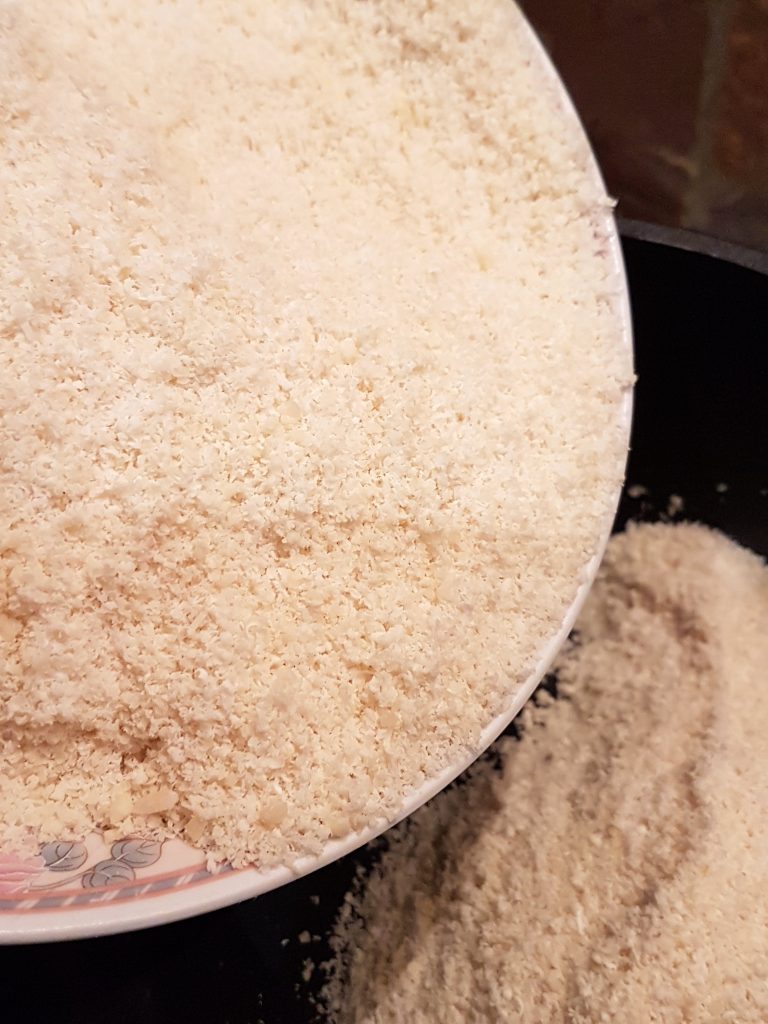 Grind the almonds – the finer you manage to get them, the less chunky the final result will be.

Whisk well, bring to a quick boil and then let simmer for a couple of minutes (to properly activate the agar). Add the coffee powder and set aside to cool down. 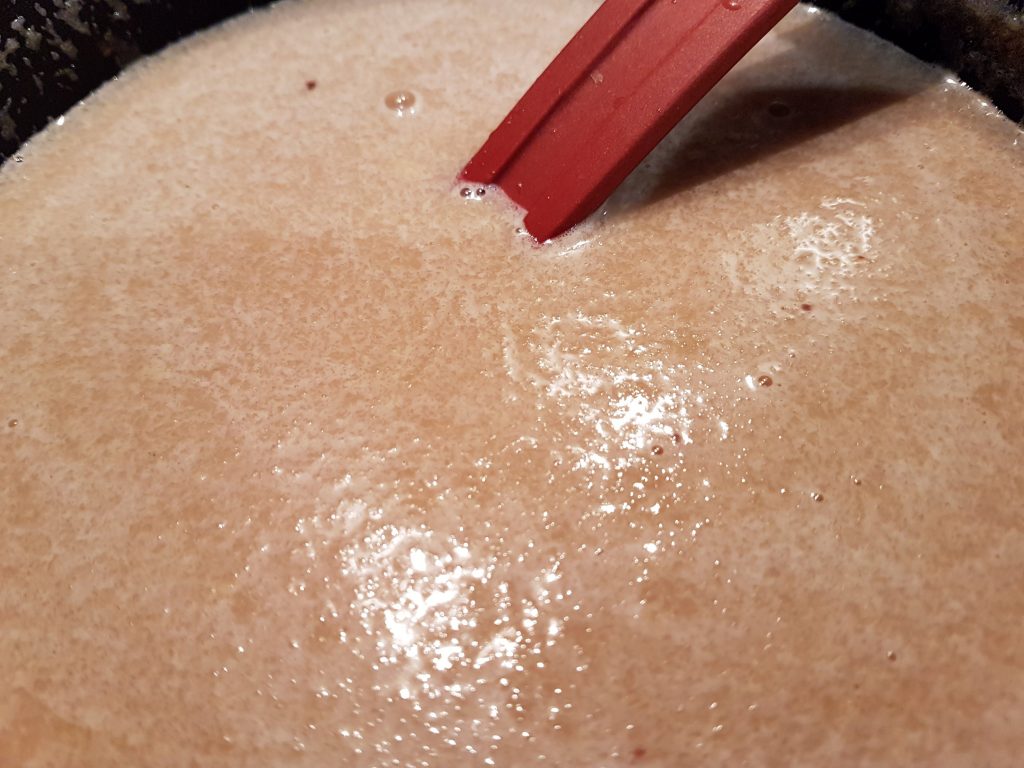 Then, let the base chill in the fridge for a few hours or so before churning: Finished! 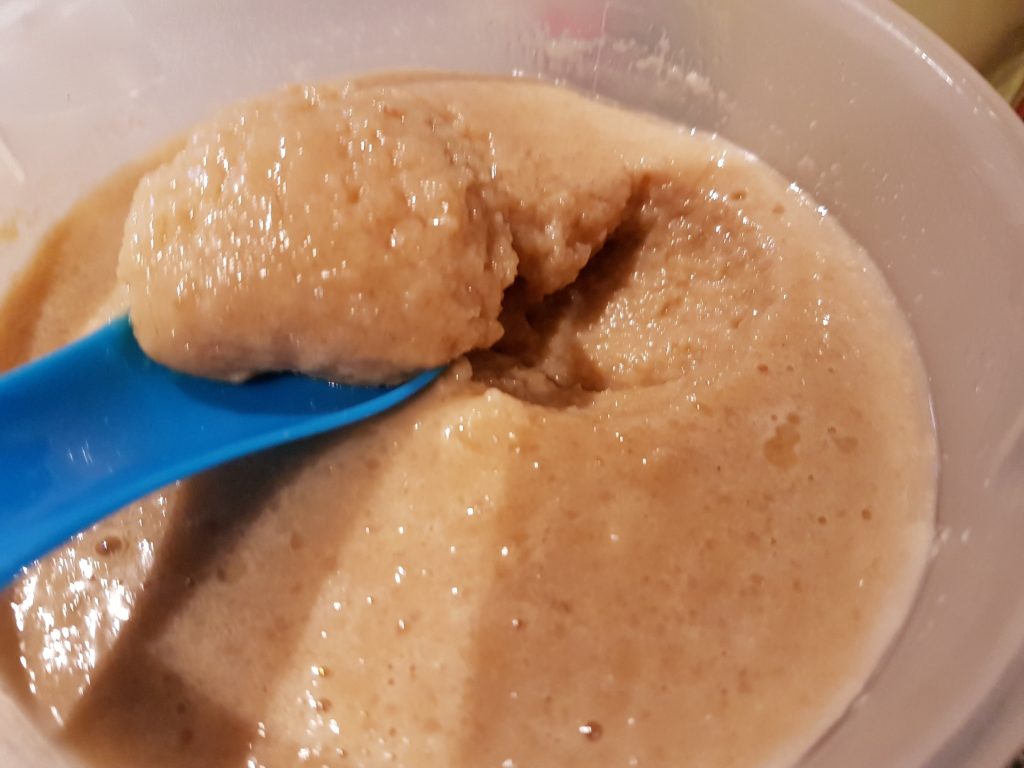 The base will thicken considerably, but should still work nicely. If you do not like the effect, however, you could try reducing the amount of agar agar somewhat.

If you want a more detailed description of the main steps, find inspiration in the post on marzipan ice cream).

A tasty union of flavours 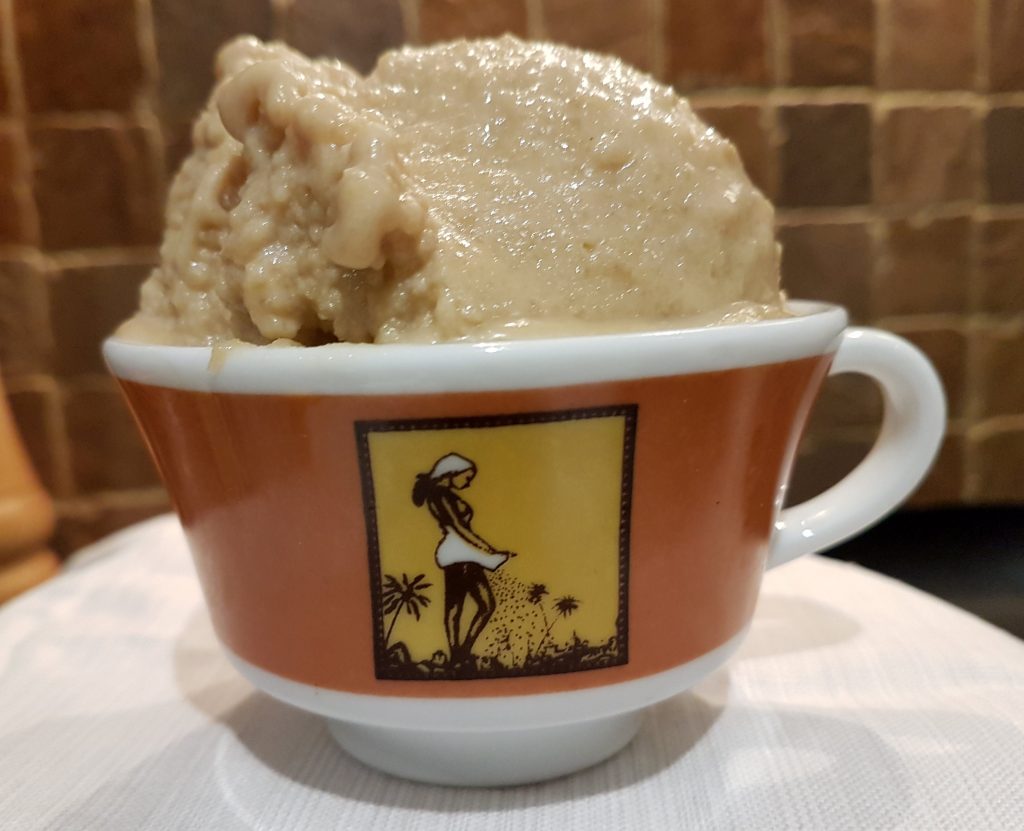 Freshly churned Coffee Almond ice cream. If left in the freezer, it will firm up some more but still retain a pleasantly soft, scoopable consistency.

A combination of sweet almond and coffee might not sound convincing, but the result turned out to be very nice!

The coffee – apart from imparting a nice adult touch of, well, coffee – adds a nice, complementary contrast to the foundation of almondy sweetness. The result is a very pleasing overall tasting experience,  both complex and well balanced. The coffee addition also helps to counter the impression of the ice cream as being overly sweet (although sweet it still is). While the consistency leans somewhat towards the chunky, the ice cream remains scoopable and pleasantly soft: no doubt thanks to the combined effects of the sugar/xylitol and the agar.

So – If you like coffee and also have a soft spot for tasty almond sweetness! Dare to venture into the land of rarer flavour gems and let yourself be seduced by the alluring combination!

Print
Almond Coffee ice cream
By: Anders@icecreamnation.org
Almond and coffee makes for a pleasant and tasty, somewhat adult, flavour combination likely to particularly please (of course) those partial to almonds and coffee 🙂
Ingredients
Instructions
Notes
Note that the Agar agar should be added to warm liquid and be brought to a boil in order to properly "activate" its gelling qualities. Also note that you could probably get a very nice stabilising result even with less Agar agar than what is set out in the recipe - if you do not like ice cream bases that settles too firmly, I would suggest trying with only about ½ of the Agar (= slightly more than 1 teaspoon).

Xylitol is slightly sweeter and also more effective than "ordinary" sugar when it comes to keeping an ice cream soft: If you like, you could replace part of the sugar against an equal amount of xylitol. If you replace all sugar, however, you could well reduce the total overall amount of xylitol a bit too.
Wordpress Recipe Plugin by EasyRecipe
3.5.3228