Today, we’ll be looking for dark stuff from the depths of the ocean …. and cram it into ice cream: Come and meet Squid ink ice cream!

Everyone knows that Cephalopods like squids and octopuses are capable of releasing ink into the water, something they usually do to distract enemies and cover quick retreats. Everyone also knows that ink can be used for writing, and at least some know that it can be used in cooking to make black risotto. But what about ice cream? Does such a strange ice cream flavour even exist?!

Yes – you guessed it: Just go to Japan! 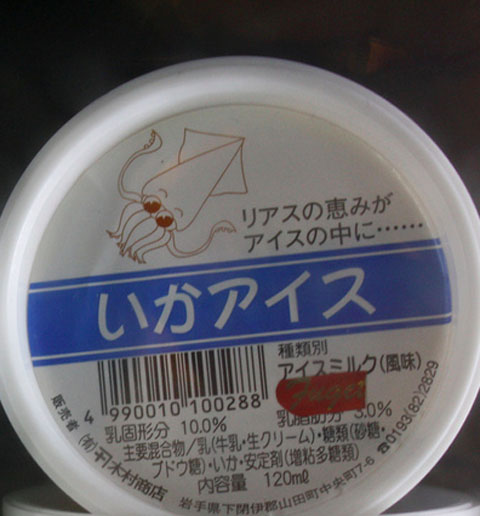 Yes – commercial squid ink ice cream can be had in Japan!
(image from http://www.gekiyaku.com)

However, not all of us can pop over to Japan just like that. Luckily, curiosity can’t be held down just because of that, right? Exactly – I went to a friendly local Italian shop and managed to find a few drops of squid ink (from cuttlefishes, to be biologically totally correct). Little did the shop keeper know that the precious dark drops would find their way into my waiting ice cream base, rather than give colour to a risotto. 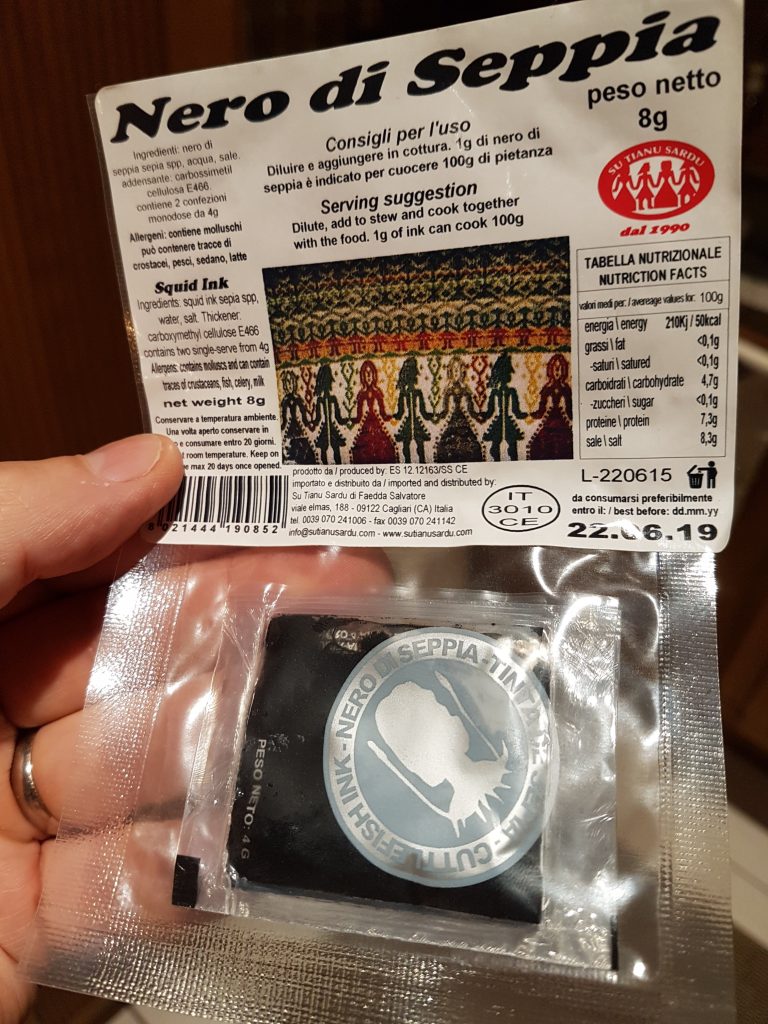 The real deal – an impressive package for 8 gram of squid (cuttlefish) ink, all fit for human consumption.

A slimy base for a slimy taste?

To really let forth the flavour (whatever it might be like), it seemed appropriate to chose a neutral and egg-less ice cream base – My gut feeling told me that egg-based ones simply might not agree with something as fishy as squid ink.

While any Sicilian gelato base could have done, I opted for my beloved Arrowroot variant: I may have seen too many adventure movies where the hero or heroine battles large tentacled sea monsters, but choosing a somewhat slimy ice cream base just seemed so very right.

As avid readers knows, this base is very uncomplicated to make: In principle, just whisk the Arrowroot powder with some cold milk, then bring the rest of the milk+sugar to an almost-boil, add the Arrowroot sludge and, while stirring the base, let it almost-cook for a couple of minutes or so. Set aside to cool down. For detailed instructions, go to this post. 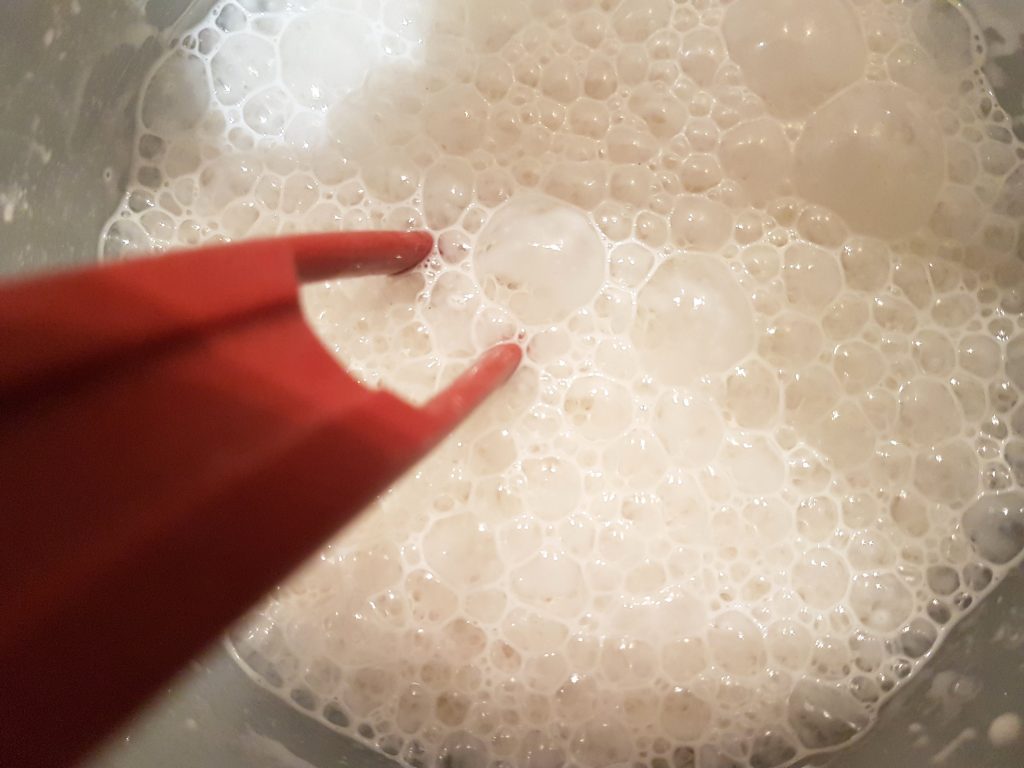 Every time I whisk in the Arrowroot, the result is usually always so … bubbly? But it looks nice.

Once the ice cream base has cooled down, you can add the ink. 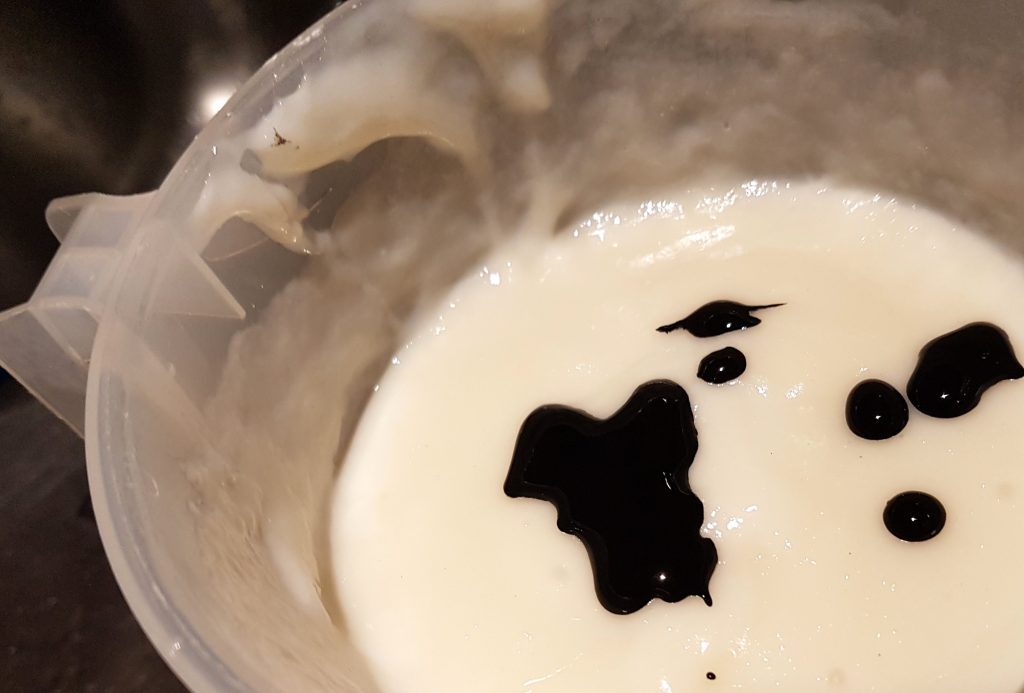 At first, the drops of ink looked rather … modest.

Whisk around to make sure that the ink disperses well. 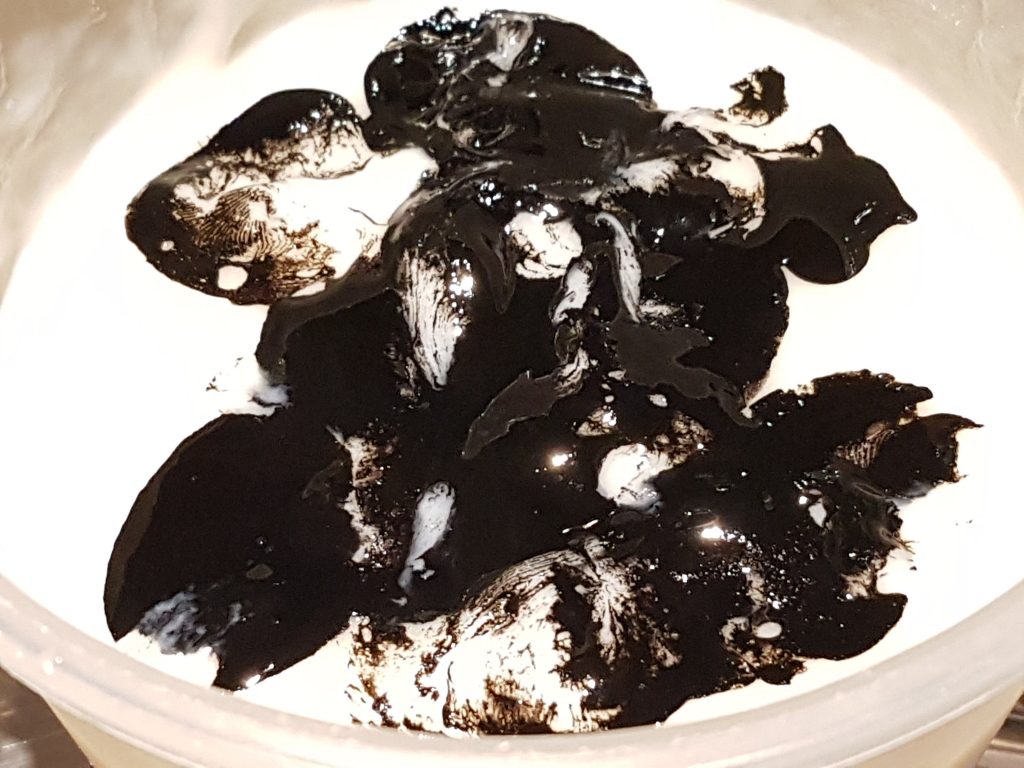 The final stretch – Churn and savour! 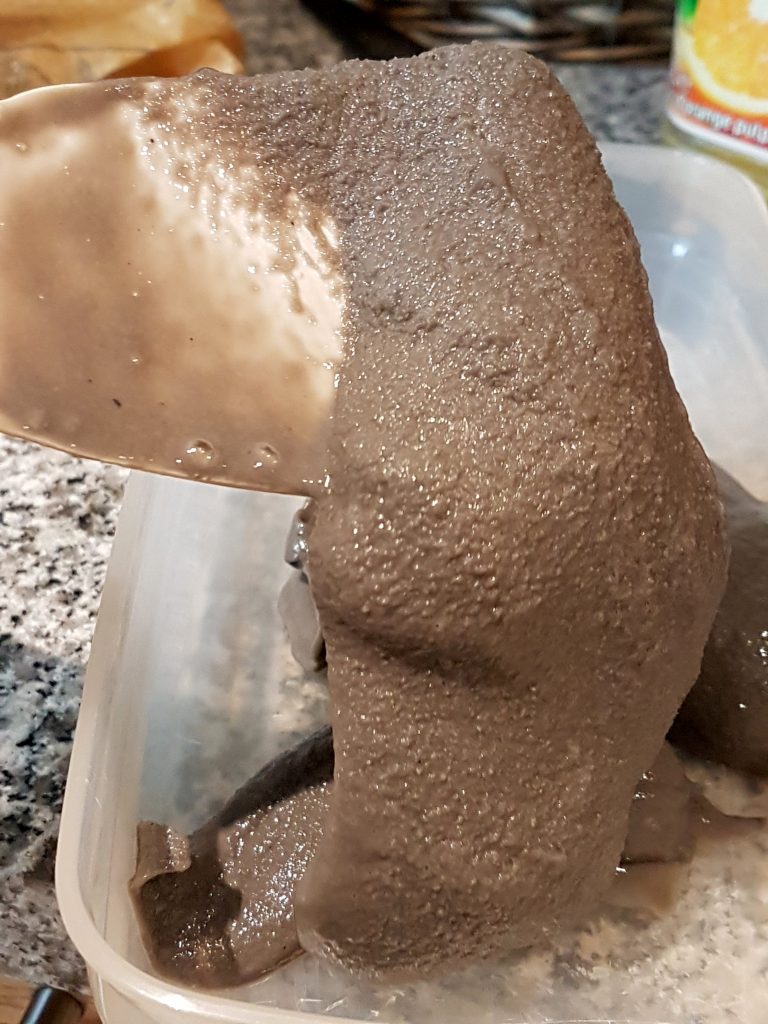 Some might start to associate to toxic waste or something, but reserve your judgement!

The mysterious and the original

How can I best describe this ice cream flavour? 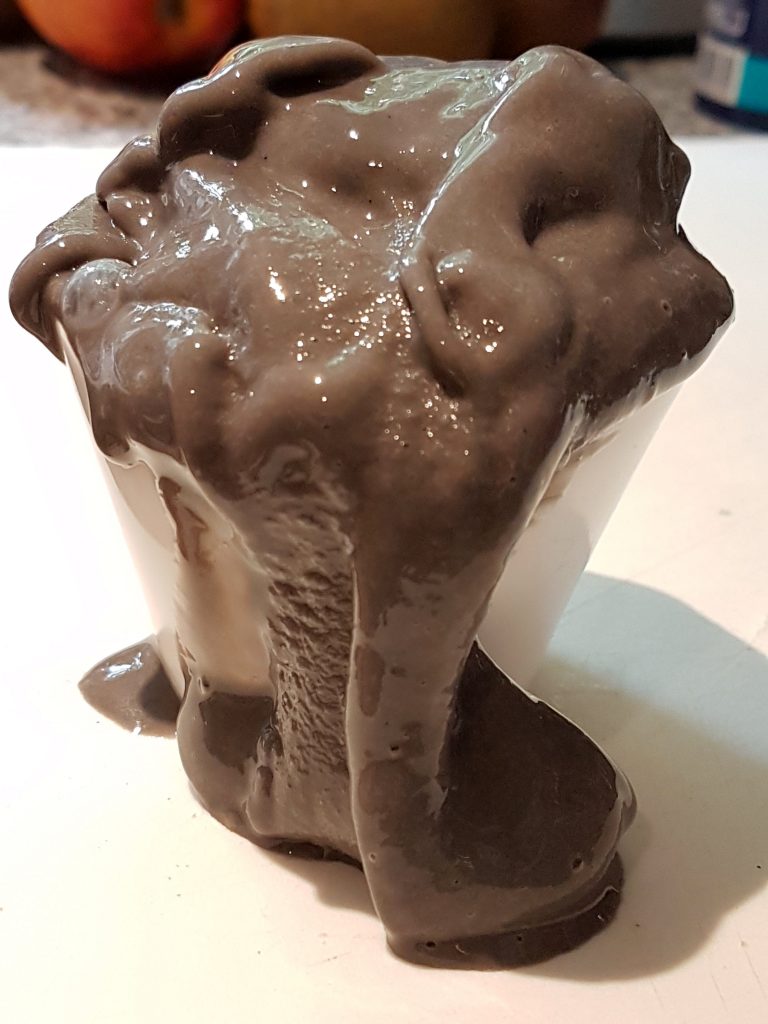 The short and honest answer is that I still struggle to find a good answer. Believe me – I have tried! And don’t think that I simply try to spare you gut-wrenching descriptions that might hurt your appetite for food in general and for squid ice cream in particular. This ice cream is a nice one, and several of my helpful testers found it very nice. I was fortunate to have about ten people testing this ice cream (without knowing what it was). A couple were put off by the relatively slimy consistency – a function of the arrowroot used for the base. Myself, I happen to like the effect which, in any case, tends to diminish radically once the ice cream is allowed to freeze further.

No – Most of us liked the ice cream, and found it pleasant. The irritating problem was that not a single one of us managed to find any proper words to describe what the flavour tasted like, save for the fact that it was sweet (no big surprise, since it contains sugar) and (for the overwhelming majority) good. I had expected some kind of lingering … seafoodishness? But there was nothing fishy about this flavour, at least nothing that we could notice. There was something else, though: the ice cream definitely has a subtle but yet distinct flavour. Slightly metallic? No, not quite right either … Listen: I have a great idea!  – Why don’t you make a batch yourself and try? Then you can tell me how you think the flavour best should be described! Please – I can’t wait! 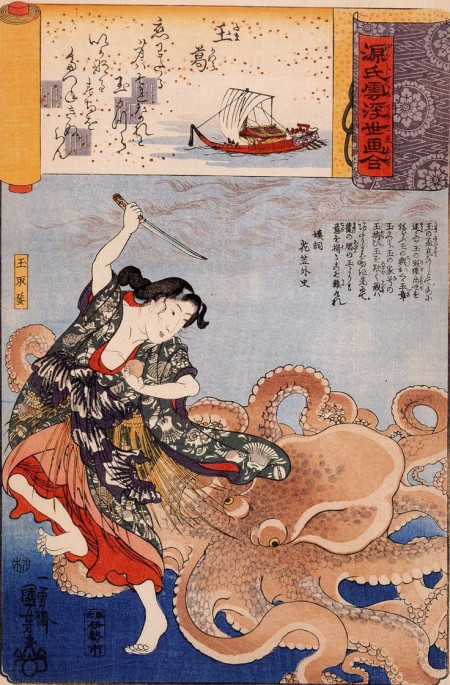 It looks like a tough fight, but no ink fog obscures the view. Perhaps the octopus still believes that it has the upper hand(s)? Well, according to the Japanese legend about Tamatora, the heroine here, it might wisest to just let go of her, quickly retreat behind a cloud of ink, and live another day (Painting by Utagawa Kuniyoshi, 1798 – 1861).