Orange blossom ice cream (or “In praise of Arrowroot”)

Floral ice creams may not be all that common. But if you like Oriental desserts, you have likely already come across the Orange blossom flavour. Since I happen to adore this dreamy, aromatic stuff, it was just a matter of time before it would end up in an ice cream. And what an ice cream it turned out to be! This particular adaptation of the popular Sicilian gelato combines a low-fat content with a shining visual appeal and a rather peculiar consistency. Peculiar consistency? Yes, because contrary to all established advice, I decided to use Arrowroot instead of corn starch. And I am really glad that I did! 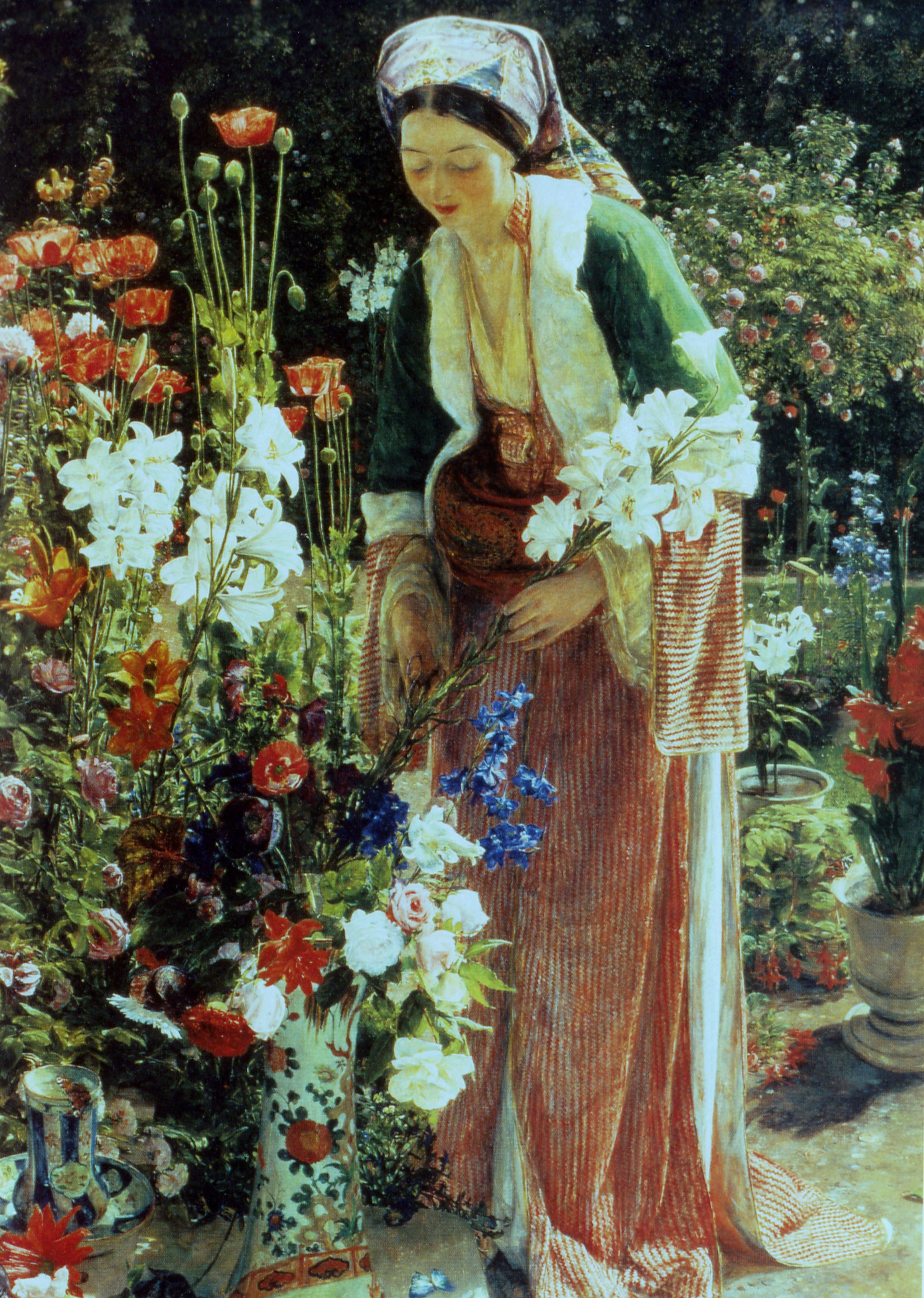 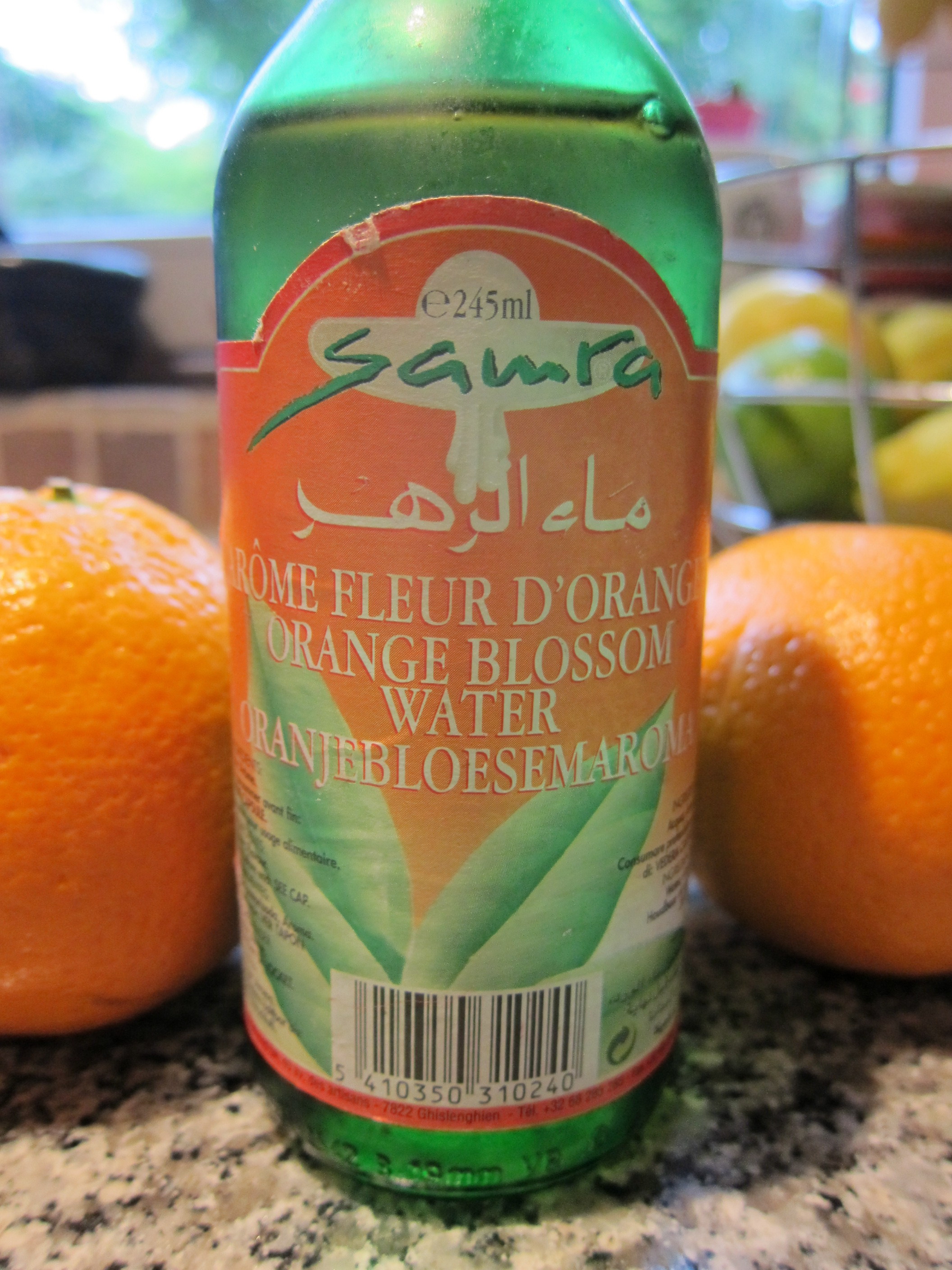 Orange blossom water is the result of steam-distillation, and thus a natural product. Qualities may shift, however, so try to find a good brand.

The ‘water’ is highly aromatic, almost like a perfume, and you might be excused for believing it to be some kind of artificial flavouring best avoided. But it is actually quite natural – the ‘water’ is the aromatic steam distillate of orange blossom flowers (with the flowers usually coming from bitter-orange trees).

Since I mainly associate the fragrance with Oriental desserts, I decided to use a variation of my Sicilian gelato as base for the ice cream. But this time, I decided to be inventive! Instead of turning to my normal choice for starch (corn starch),  I was curious to see what would happen if I used another type – Arrowroot!

Why this curiosity? Because I had read several texts warning against the use of Arrowroot together with dairy, since that apparently was likely to lead to a ” slimy consistency”.  “Slimy consistency”, however, somehow seemed quite fascinating, and I had a feeling that this actually could benefit the type of ice cream I had in mind.  Well, there was only one way to find out!

Arrowroot is basically starch derived from the rootstock of certain tropical plants.  One explanation for the name is that it refers to its early use by Caribbean tribes to treat arrow-wounds, since the starch had the ability to draw out poison from the arrows. 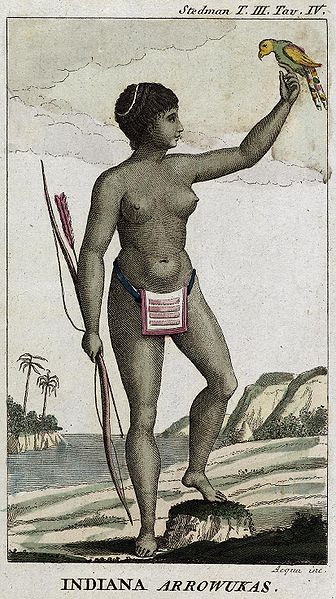 Used as a stabilising agent, Arrowroot comes packed with positive qualities. Pure Arrowroot is distinctly white and lacks both taste and aroma. Unlike corn starch, it stabilises at lower temperatures (thus, does not require as much heating as corn starch). And again unlike corn starch (if not sufficiently cooked), Arrowroot does not leave any traces of “starchy-floury” flavour whatsoever. On top of that (and once again, contrary to the matte effect of using corn starch) using Arrowroot would also give a shiny appearance to your product.

Sounds great, does it not? And yet, the only times I had seen Arrowroot recommended for ice cream making was in vegan recipes. And all because of the purportedly slimy outcome when Arrowroot was combined with dairy. But could that really be so bad? After all, some Oriental ice cream (like the Greek Mastic and the Turkish Dondurma) are stretchy to their nature. No time to waste – I put together a base, using Arrowroot instead of corn starch and – gulp! – combined it with milk!

As to its practical use in ice cream, Arrowroot – like all starches – should be whisked and diluted in a little cold liquid (= here, some of the milk used in the recipe). Set that aside and bring the rest of the  ice cream base (here basically milk, sugar, a little vanilla and a pinch of salt) to the level of “steaming hot”.  Now, quickly whisk in the milk with the diluted Arrowroot and continue to cook the mixture – while whisking the base – for about 2-3 extra minutes. The base should be kept hot but not boiling, since Arrowroot begins to stabilise at lower temperatures than, say, corn starch. Prolonged, or too much, heating will actually diminish the stabilising effect (the same applies to corn starch, but Arrowroot is more delicate also in this respect). But in my experience, a couple of minutes or so of cooking the starch only seem to aid the stabilisation process.

Once taken off the heat, the base should be cooled down as quickly as possible. This would also be the point when I add the orange flower water to the base. Once cooled down, chill the base in the fridge for a few hours or preferably over night.

If not already evident before, the “slimy” qualities of the arrowroot-dairy mixture should by now be clearly noticeable. If you have used a bit too much Arrowroot, the base could well have taken on an almost blob-like character (like a semi-solid, clingy mass of jelly). Using a “correct” amount of Arrowroot will not produce such blob-like effects, but you will be able to notice that the texture  (for lack of better examples) somehow resembles that of viscous toy slime. 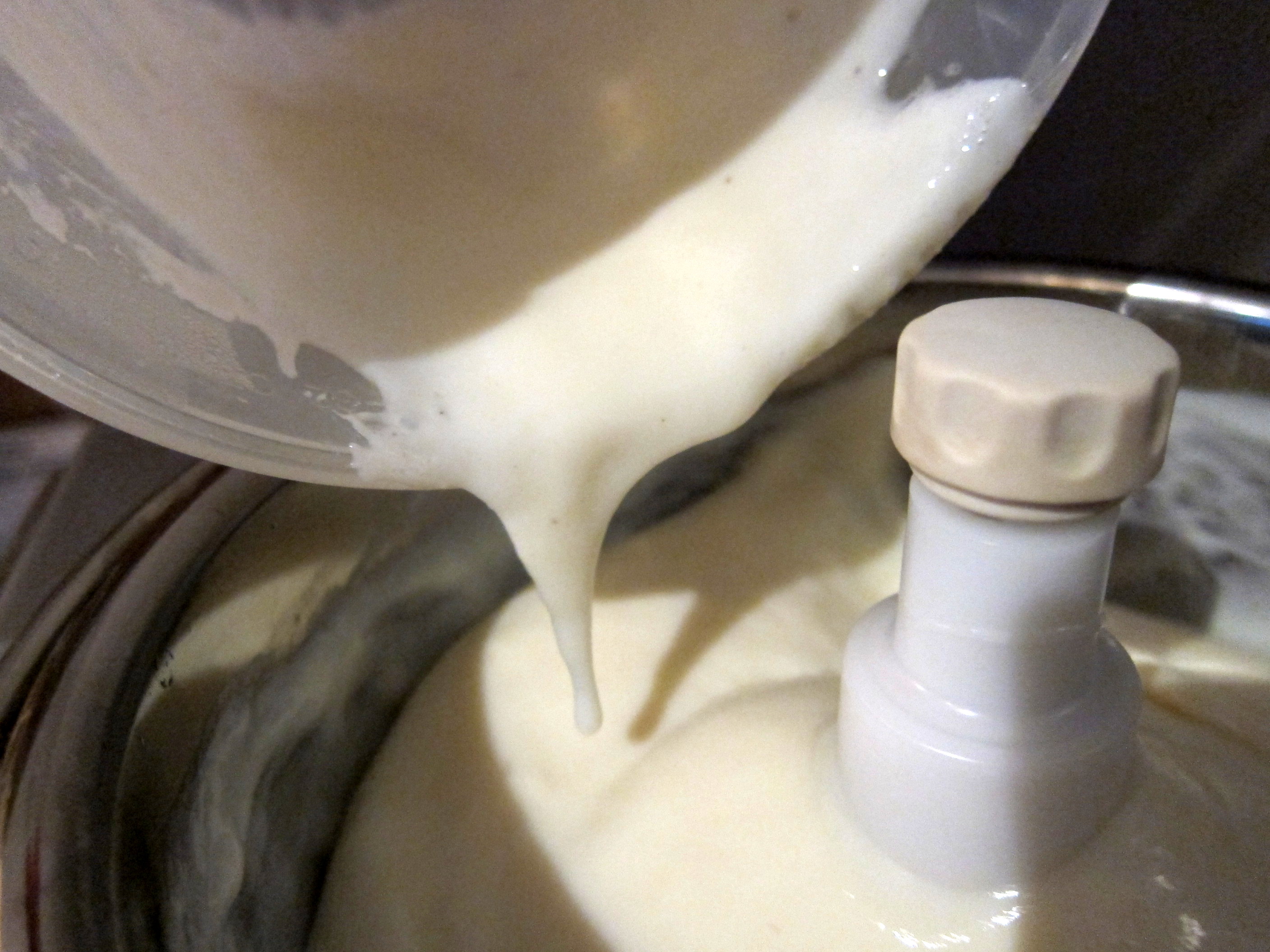 Worried about the ‘slimy’ aspect? Well, have no fear! First of all, this ‘slimy’ texture is actually quite nice: eating the ice cream freshly churned and still quite soft could give you an entertaining, somewhat different experience of texture and mouthfeel – try it: you may well come to enjoy it. But even if you still would prefer a more ‘typical’ ice cream consistency, just let the ice cream spend a little time in the freezer. Freezing will affect the consistency and make the ice cream firmer in shape, including doing away with most of the “slimy” characteristics.

The stabilising capacity of the starch provides for excellent shape-retention and a pleasant mouthfeel. The texture might come across as slightly “chewy”, which in many ways remind me of the positive and intriguing chewiness of some Oriental ice creams. And best of all – the Arrowroot leaves no flavour marks whatsoever of its own!

I can also confirm that Arrowroot does give a shiny finish! As you may glean from the pictures below, the surface of the ice cream is practically shining bright: a very nice effect when dealing with ice creams, if you ask me. 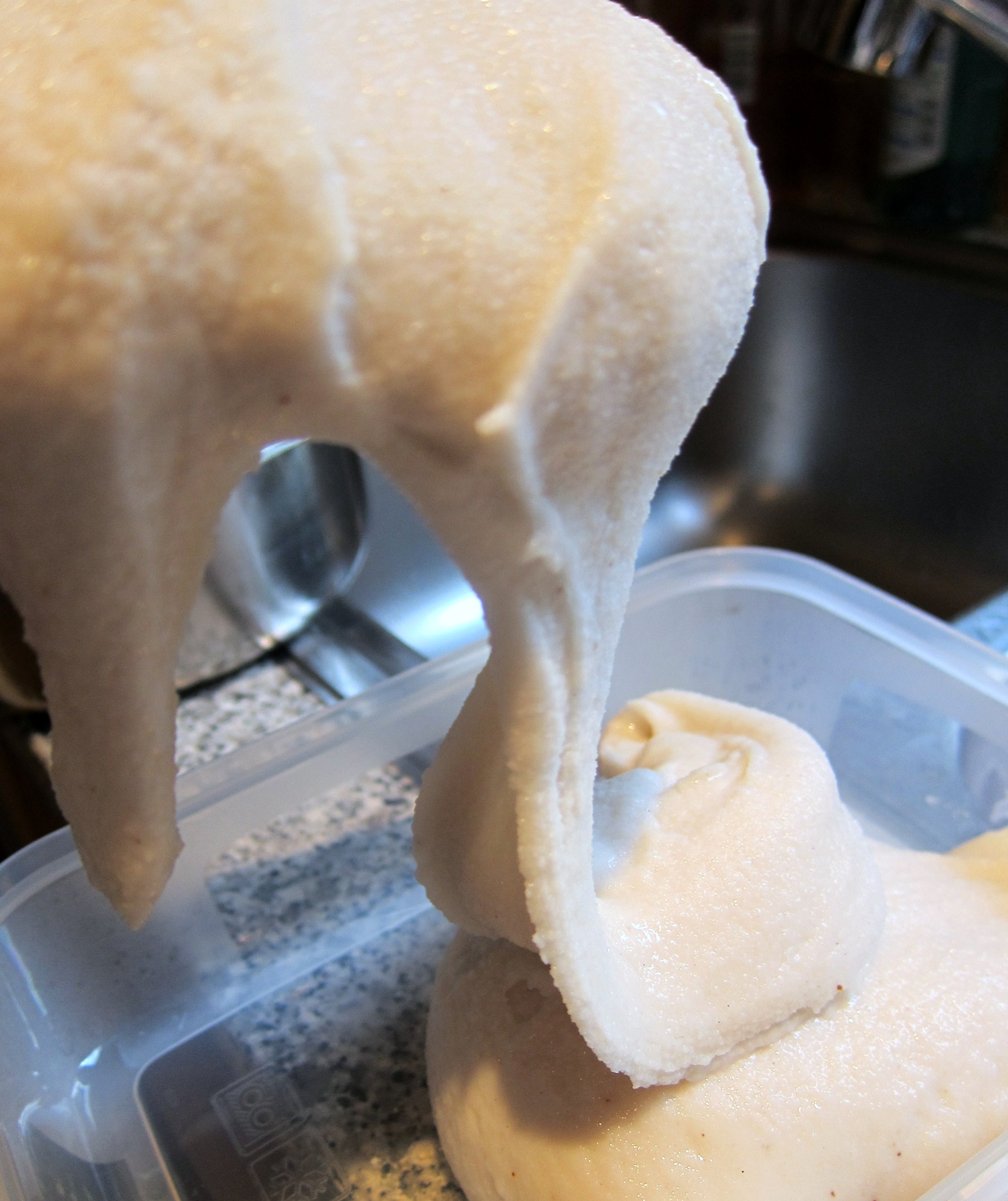 Intriguing stretchiness (in a nice sense!) and a vivid, shiny appearance makes this ice cream based on Arrowroot starch stand out 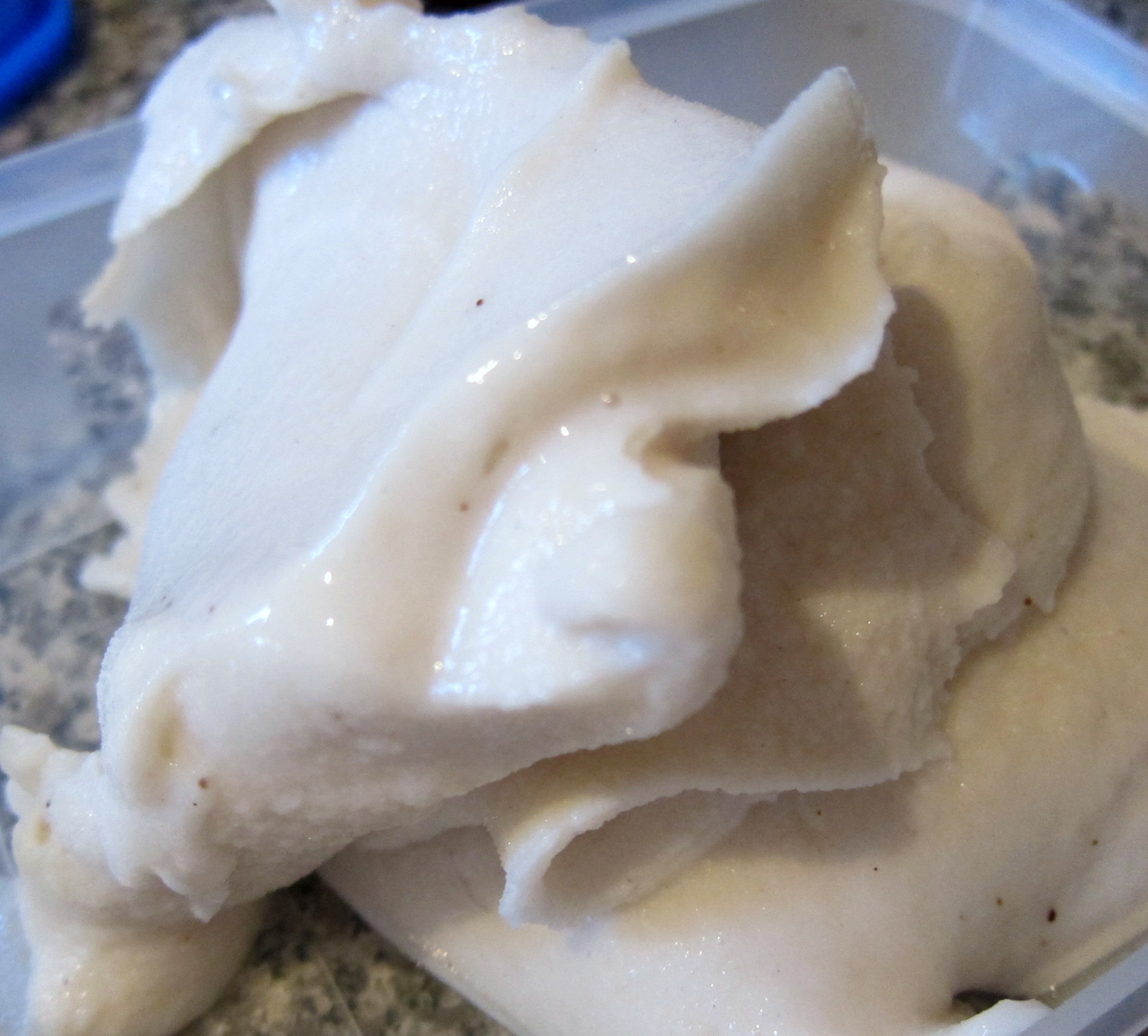 Shape-retention is notably good (particularly considering that the ice cream is made up of milk only). 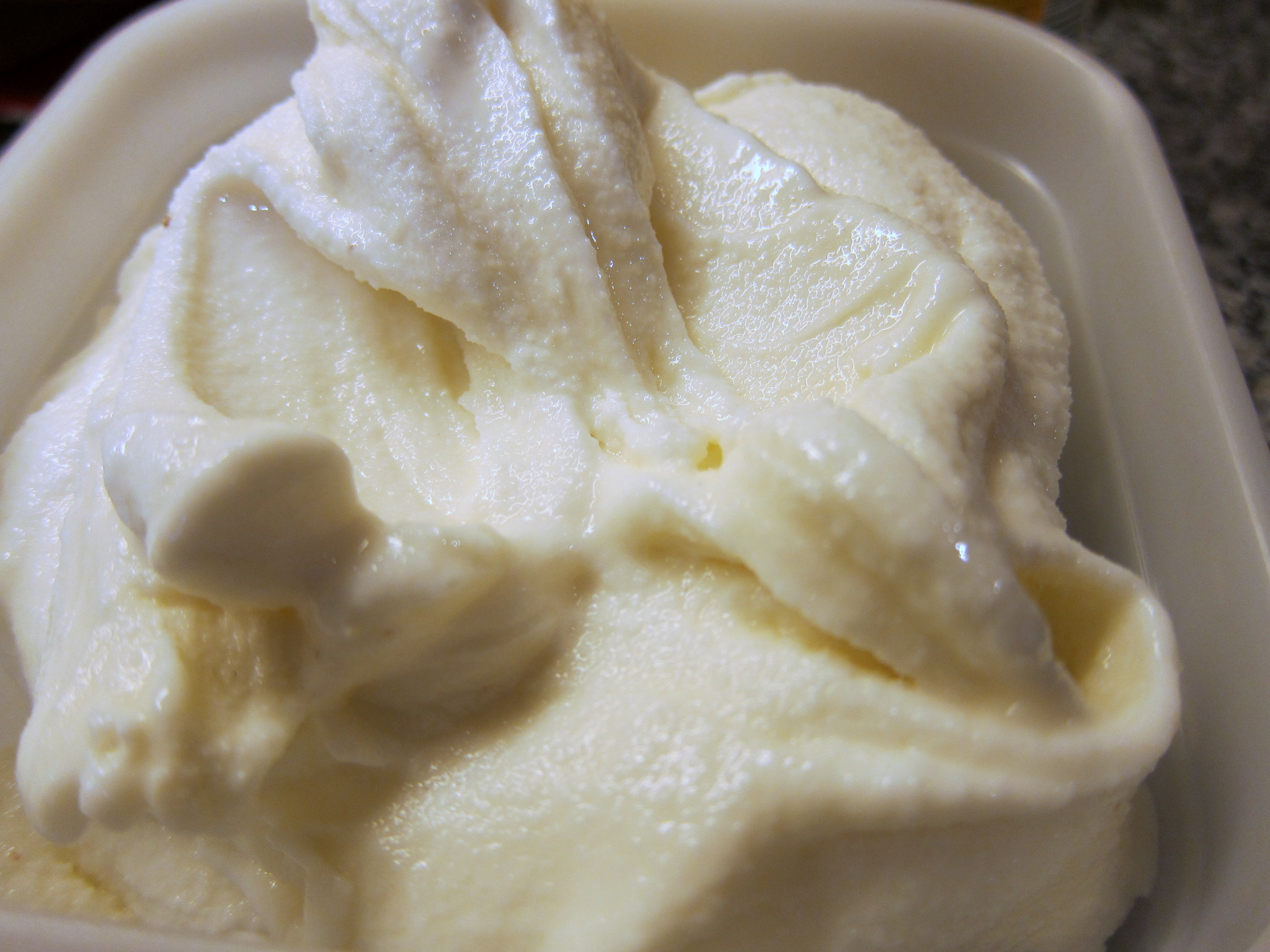 This may well be one of the most visually appealing ice creams that I have made. 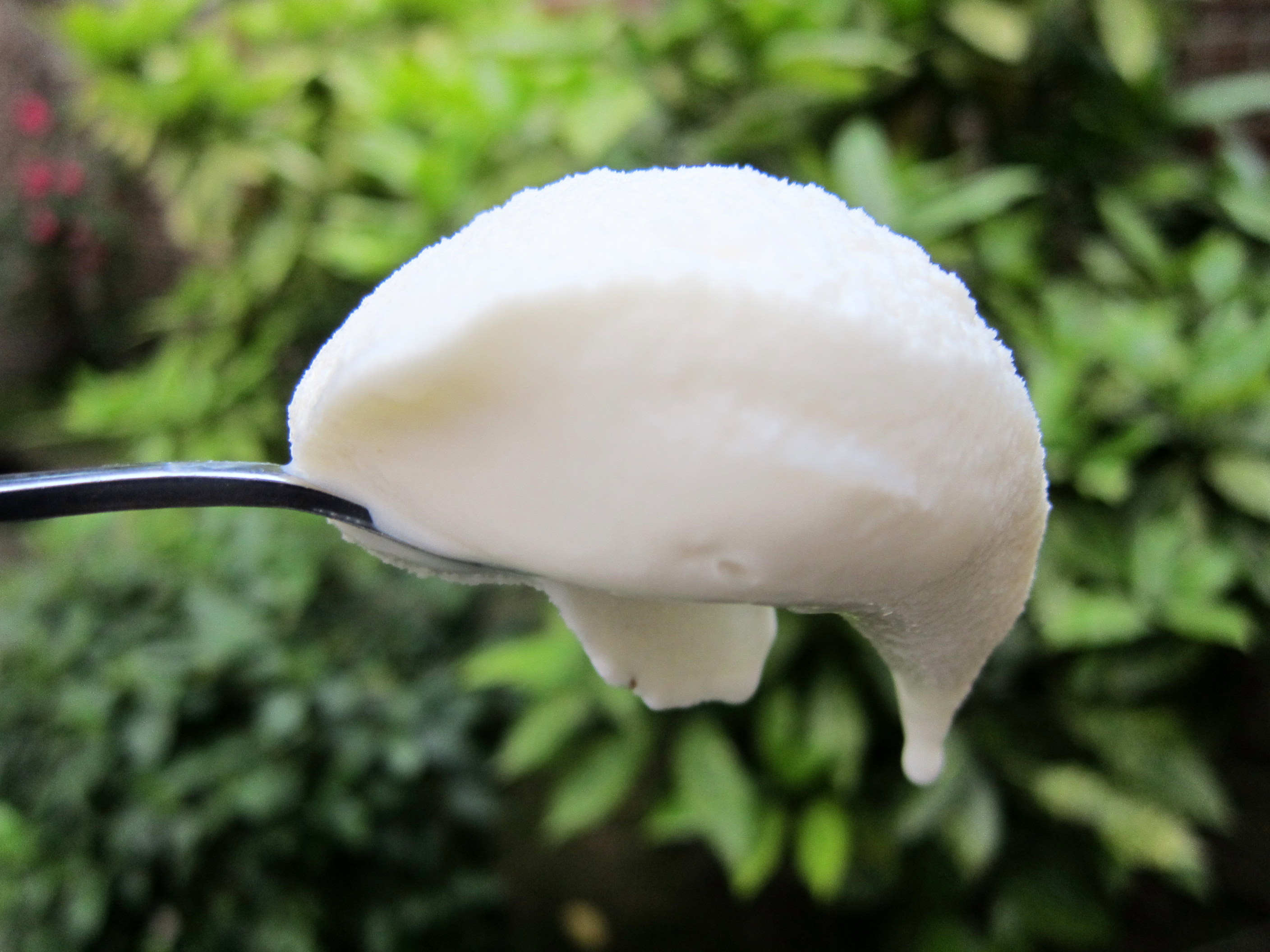 Orange blossom ice cream, Sicilian gelato-style (the Arrowroot variety): Pure as snow, and with small ‘wing-tails’ that hint about the peculiar texture

And the orange blossom flavour? Oh – it turned out like an enchanted dream from Arabian Nights! In fact, I have already started to lose track of how many times I just had to make another batch of this truly terrific flavour. But then, how could it be less than great with such a superb base?

The starch of the Arrowroot contributes to a spectacularly well-suited ice cream base, imparting a nice chewiness and mouthfeel to the floral flavour which otherwise might have come across as a bit ‘thin’. Now, it was just perfect! And notice that the ice cream remains truly light in terms of calories – no cream, no eggs … just milk, sugar and Arrowroot.

Arrowroot has clearly sailed up as my new favourite ingredient for making Sicilian gelato-style ice cream. All that I have mentioned – the pleasant mouthfeel, the smoothness and the total lack of any additional starchy flavour  – make up a perfect, basically foolproof, ice cream base for most any flavour one could imagine. And I like the glossy shine.

So, dear fellow ice cream lovers: let’s break the conventions and put some Arrowroot in our ice creams!

4.6 from 12 reviews
Print
Orange blossom ice cream
By: Anders@icecreamnation.org
Seductively floral and oriental in character, this low-fat ice cream (milk only, no eggs) with a reassuringly pleasant and smooth mouthfeel brought on by Arrowroot is destined to put a smile on your face
Ingredients
Instructions
Wordpress Recipe Plugin by EasyRecipe
3.2.1251 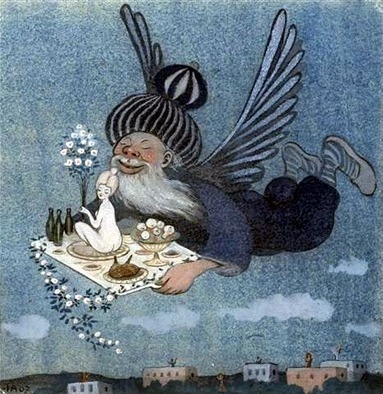