First of all, excuse the following over-simplifications. “Oriental ice cream” covers quite a diverse field so this is mainly an attempt to highlight three main aspects of this rich tradition.

One technique, which uses (corn) starch as stabiliser instead of eggs, is sometimes labelled “Oriental” (I have previously done so myself). This style is, however, also well known in Southern Italy. While Sicilian gelato almost certainly has strong Oriental roots, it is therefore also a European ice cream tradition with a very long history in its own right. Corn starch-ice cream will mainly be covered further in my post on Sicilian gelato. You will, however, still find such a recipe with Oriental flavours below.

If we consider “Oriental ice cream” in terms of techniques and ingredients, the main defining features would (broadly speaking) be that these ice creams are prepared without eggs, and use different stabilisers (such as starch, mastic (arabic gum), Gum arabic or similar). These stabilisers tend to bring different degrees of more “chewy” textures to the ice cream, taking us from Sicilian gelato (corn starch) to Bouzat haleeb and Kaimaki (corn starch, sometimes salep, and mastic), and ending up with very particular ice creams such as the legendary Turkish Maraş Dondurmasi (outside Turkey often referred to just as “Dondurma” which in Turkish however just means ‘ice cream’; mastic and salep). 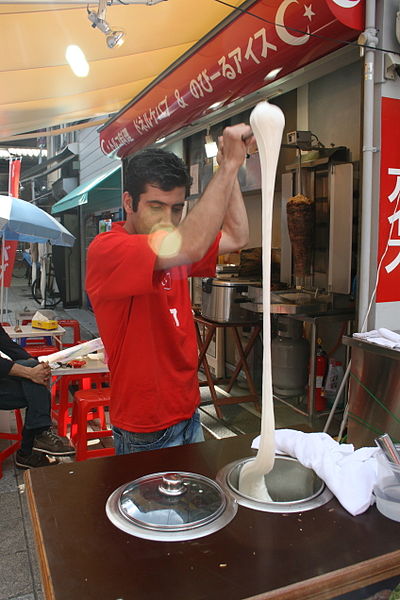 3-4 tablespoons of corn (or other suitable) starch

Blend  200 ml (0.8 cup) of the milk/cream with the corn starch, making sure that there are no lumps. Set aside for now.

Blend the remaining 500 ml (2 cups) of the milk/cream, the sugar, the salt and the cinnamon stick in a pot. Warm until steaming hot on medium heat.  Now, blend in the corn starch mixture with the rest of the ingredients in the pot. Barely reaching a boil, cook and stir for about five minutes, or until the mixture begins to thicken.

Reduce the heat and continue to stir for another five minutes until the mixture has thickened even further and any possible “floury” taste (from the corn starch) has disappeared.  Take off from the heat, add the rose water and let the mixture cool down.

Refrigerate for a couple of hours, remove the cinnamon stick and freeze according to the instructions of your ice cream machine. 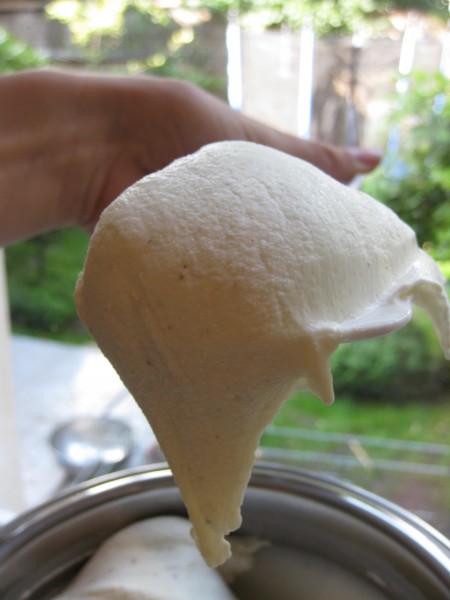 A note on the recipe: As noted above, this base recipe is almost identical to the one for Sicilian gelato – by omitting the rosewater, this base can be used with almost any ice cream flavours. Since I am very fond of (corn) starch-based ice creams myself, I recommend every ice cream lover who has not yet tested to try that out – you are likely to get pleasantly surprised. If you want to increase the “stretchiness” of your ice cream beyond the normal, you might simply experiment with adding even more starch to the ice cream base!

UPDATE: Go here for a delightful variation on Sicilian gelato (but stabilised with Arrowroot as prefered starch) which is many ways turns out to be more ‘Oriental’ in feel than when made with corn starch: Orange blossom ice cream!

If we move further along the Oriental ice cream recipe-scale, we find the Mastic-type:

3 tablespoons corn starch (or 1-1  1/2 tablespoon, if equal amounts of milk and cream are used)

(if desired, abut 1-2 tablespoons rose water and/or other additional flavouring)

Pulverise the mastic (since it is a resin, it may be easier to handle if you first freeze it for 10-15 minutes and then put the resin drops together with a couple of teaspoons of sugar in the mortar).

Whisk together the corn starch and 200 ml (0.8 cup) of the milk, making sure that no lumps are left.  Set aside.

Whisk together the pulverised mastic with the rest of the milk/cream and the sugar, warm until steaming hot and until the mastic has dissolved.

Just before reaching a boil, add the corn starch-milk. Stir continuously on low heat to avoid any lumps for at least about 10 minutes, until the mixture has thickened. Remove from the heat, add the rose water (if desired), and let the mixture cool down.

Refrigerate for a couple of hours, and freeze according to the instructions of your ice cream machine.

NOTE: Mastic brings a very peculiar taste (roughly speaking, think “Pine tree”) to the ice cream, so you may consider to lessen the amount you use, or add other flavours to “balance” the mastic-one.
UPDATE: Go here for a whole post devoted to delicious Greek Mastic ice cream!
Some classical oriental flavours you might want to add and explore could be pistachio, or orange flower/blossom water. A sprinkle of chopped almonds could also be nice. 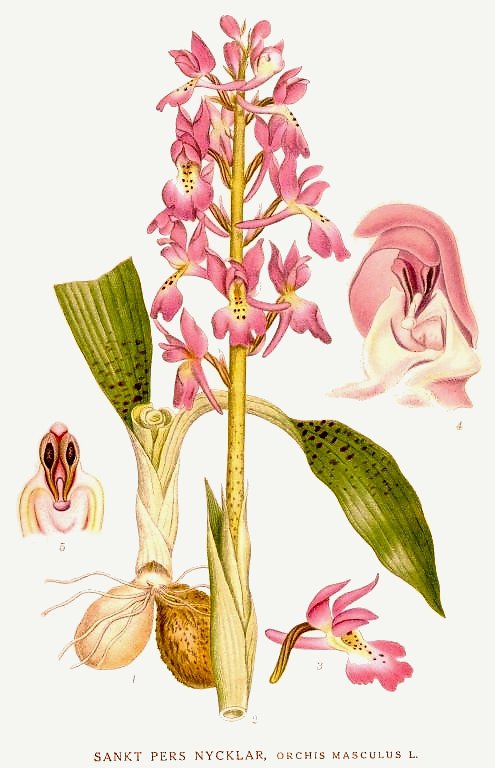 Not quite stretchy enough? – guidelines for making your own Dondurma (and special notes on Salep)

Genuine Dondurma (or Maraş Dondurmasi, to be exact – “dondurma” in Turkish simply means ‘ice cream’)  is made on Salep (Sahlab) instead of more ordinary starch. The salep acts as a thickening agent and imparts a specific extra dimension of chewiness way beyond what is possible to achieve only with ‘ordinary’ starch. It is difficult to describe the texture-sensation, but imagine eating a chewy type of ice cream in which someone has hidden a soft, rubbery and semi-solid core (which, however, seems to avoid capture whenever you take a bite).  Described like this, it does sound quite strange, does it not? I should therefore like to add that, while rather different from your usual ice cream-experience, I found it very nice.  Sadly, however, Dondurma is – in nature-protection terms – currently not a very sustainable ice cream.

Salep flour is made of the orchid tubers of a rare orchid which are picked while the plants are in bloom. Consequently, they won’t be able to set seed and the plant is also destroyed (The orchid in question – Orchis mascula – is even on the CITES Convention’s list of endangered floral species; another reason why export of Salep from Turkey is forbidden). In other words, there are many good reasons why it is preferable to seek out a salep-substitute!

There are several suggestions as to the best salep-substitute.

Many people stick to starch (see above), while acknowledging that this does not provide the characteristic thickened stretchiness of Dondurma (and they are right – corn starch alone cannot replicate the particularities of the ice cream). The closes resemblance, if using more ‘ordinary’ types of starch is probably brought about by Arrowroot. Others (notably Harold McGee) have suggested using some guar gum (E 412) or Japanese konjac (konnyaku) flour. A combination of Konjac flour and locust bean gum (E 410) has also been suggested to bring about an acceptable Salep-resemblance.

A quite ambitious project to search for the perfect substitute by the International Culinary Center has reached the conclusion that a mixture of gellan and guar gums ( E418 and E 412, respectively) come very close to “the real Dondurma deal”.

Don’t forget to beat your Dondurma!

When trying to make Dondurma, remember that the ice cream base in all cases needs to be worked hard, pretty much like a dough. After the ice cream base has been frozen (in your ice cream machine, or by using still-freezing methods) – arm yourself with a wooden spoon, place it in a mixing bowl and beat it for at least 15-20 minutes to develop the stretchiness.