Keep your head cool, they say. But no-one likes brain freeze – the nasty sensation so strongly associated with ice cream that it also is known as  ‘Ice cream headache’.

But what is it, and what could be done about it? Read on! 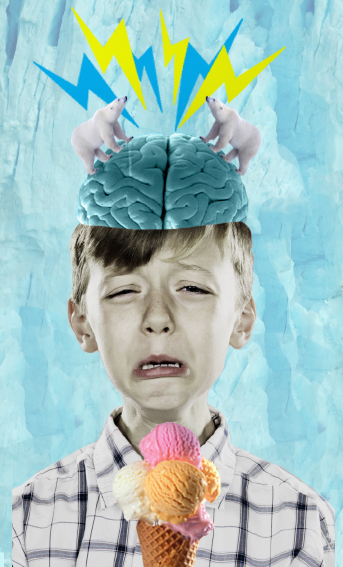 Brain freeze – haven’t we all felt the pain ?

Brain freeze, or ice cream headache, well-known to most lovers of ice cream, is a brief, but very unpleasant cranial pain that may hit you like a flash during consumption of ice cream (or other cold things). Currently, there seem to be two main theories trying to explain what actually happens.

The first theory suggests that the phenomenon is caused by nerve receptors sending confused messages to the brain.

There is even a Latin name (sphenopalatine ganglio-neuralgia) for it, and the path to brain-pain begins when the cold stuff (like ice cream) you put in your mouth touches your palate, causing its blood vessels to contract. The contraction is noted by the local pain receptors. But instead of accurately signaling “palate pain”, the physical sensation is transmitted along the same responsible nerve that “takes care” of the forehead. Consequently, when the nerve message is received by the brain, it concludes that the nerve actually signals “forehead pain”, not “palate pain”. And we feel the pain … but strictly speaking, in the wrong place. 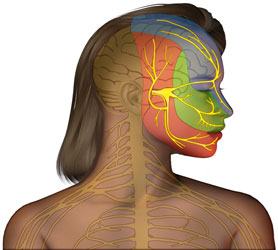 The Trigeminal nerve (in yellow) – responsible for a mixed-up transmission of pain signals?

According to the second current theory, the pain is caused by a sudden influx of blood to the brain through the anterior cerebral artery. The sudden swelling of the artery itself is believed to generate the pain (which then dissipates when the artery constricts in order to re-regulate the blood pressure).

They say that something good always comes out of something bad, and some scientists are now looking at the second theory and ponder whether studying brain freeze actually might lead to a better understanding of, and perhaps even a cure for, migraine.

While the fleeing sensation of brain-freeze is unpleasant, it certainly does not cause the same amount of suffering as migraine, so perhaps we should be more appreciative next time we feel the freeze;-) 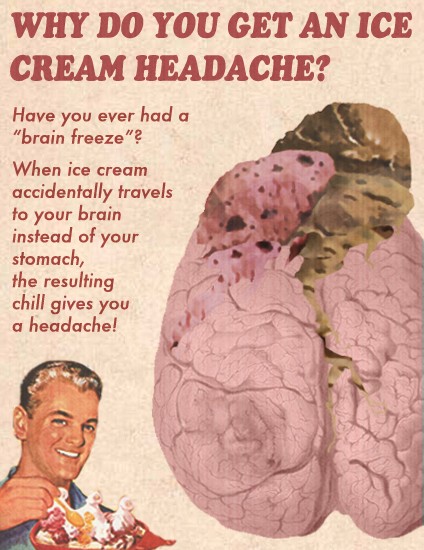 Since brain freeze usually is caused by an initial cold-chock to the palate, it is a good idea to begin eating ice cream in a “tempering” way: eat it slowly, and in such a way that the mouth (and particularly the palate) gets used to the cold.

Try to press your tongue against the palate (to warm up the cold-chocked area).

Similarly, drinking something at least slightly warmer than the ice cream might also alleviate the pain.

Just remember to act quickly – after all, brain-freeze suffering usually does not last longer than about half a minute …