“Without dignity there is no freedom, without justice there is no dignity and without independence there are no free men.”

Ever heard of Patrice Lumumba? A controversial independence politician and African nationalist in his lifetime, he was the first democratically elected Prime Minister of Congo.  Much can be said about Lumumba, who today is considered a hero and a martyr in Congo, but where is the ice cream connection? Well, there exists a long drink named after Lumumba. And the Lumumba drink  – usually made up of chocolate, cream and brandy – turns out to be just the perfect ice cream flavour! So, get ready for one of the very best chocolate ice cream-varieties I have ever tried! 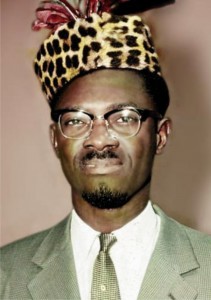 The exact origins of the Lumumba drink seem difficult to pinpoint. The actual mix of chocolate, brandy (sometimes rhum) and cream existed already before him (in certain parts of Germany, such drinks have long been known as ‘Tote Tante’  [Dead Aunt]. Don’t ask me why, because I have no idea – perhaps some German reader could help us out on that one?).

I have read that the original naming of the drink – which probably dates from the 60’s – may have been intended to be derogatory and even racist (Lumumba’s skin colour = the colour of the chocolate).  But fortunately, culture and cultural meanings can, and do, change! The political left – who held Patrice Lumumba in high regard – apparently picked up the name of the drink and loaded it with positive connotations of appreciation and solidarity. By the 70’s, the naming had come to stand for something positive, and I sure hope that remains the case today.

The Swedish version – Lummelumba ice cream from the island of Gotland

I would love to claim credit for the great idea to turn the Lumumba drink into an ice cream flavour. But apart from the fact that there probably already exist ice cream-varieties out there of about every alcoholic drink ever invented by man, I also happen to know of a commercial version of this particular flavour!

Gute Glass, one of my favourite regional Swedish ice cream producers, is seated on the charming island of Gotland. For a very long time, they have sold an ice cream flavour named “Lummelumba” – the name being partly a reference to the Lumumba drink, and partly a reference to a county of the island named  Lummelunda, well-known for its fascinating underground cave. 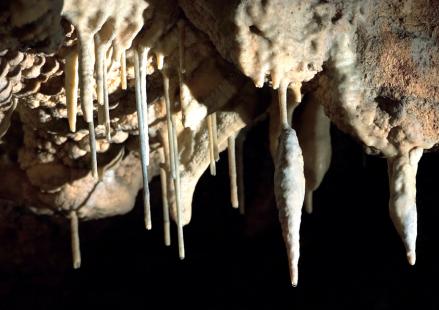 The island of Gotland is a truly enchanted place in its own right, with medieval architecture and a fascinating nature. And I am no stranger to it – both the island and the ice creams from Gute Glass hold a very special place in my heart. Once upon a time in my youth, I was doing my military service on that island. Afterwards – like most of my comrades-in-arms – I vowed never to return if I could avoid it … only to somewhat later fall in love with a girl from the island. Soon, the vow was forgotten, the trips to Gotland became numerous, as well as the number of ice creams enjoyed there.

But all that time, I never really understood the name, nor could I accurately identify the particular flavour of the Lummelumba ice cream. But when I recently found out, I longed to test a version of my own!

Keeping true to the long drink-origins, the amount of alcohol used in this recipe places the ice cream in the category “adult ice creams”. So, unless you plan on substituting the brandy with some type of flavour extract, I would reserve this one for the grown-ups:-) .

Choosing a base – simplified custard!

Simplified custard is a base that falls somewhere between the other main ice cream-bases, and the name attempts to convey some of its characteristics: the base is cooked, but uses much less eggs than ‘full-fledged” Italian/French-style custards.  And there is no ‘tempering’ of the egg(s) to be done:  the egg(s) go into the ice cream base with (most of) the other ingredients right from the very beginning!

Another way to describe the base would be to say that it is a lot like an American-style base, but with an added egg thrown into the mixture – a mixture which then is cooked on the stove, to take care of any worries caused by raw eggs.

While the other bases of course also could be used, I find that the simplified custard works extremely well for the Lumumba ice cream!

How to prepare the ice cream

The ingredients are straightforward, and reflect the obvious chocolate base: Cocoa powder (in respect of Patrice Lumumba, I used fair-trade), some high-quality dark chocolate, raw sugar, cream, whole milk, some vanilla and a couple of pinches of salt, an egg and some brandy. For the brandy, I used some French Cognac (which, after all, is a noble type of brandy). 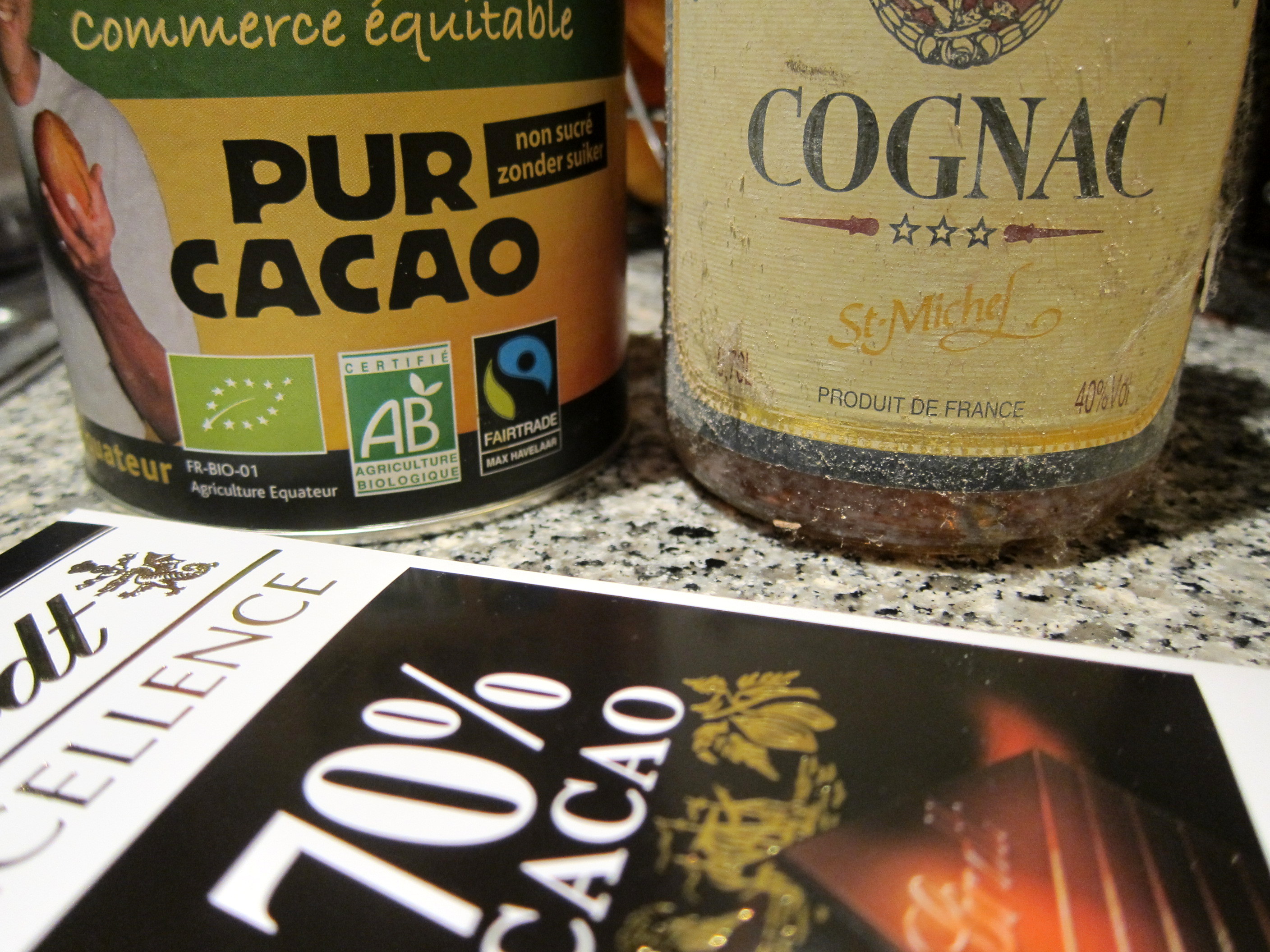 The rest is really very uncomplicated – Except for the alcohol, all the ingredients including the egg are whisked together in a sauce-pan from the very start.

Then turn on the heat, continue to whisk the mixture and carefully bring the base to a temperature of about 82-84º C /189-183ºF (or rely on the Spoon-test as described here, in the section about making custard). As always when it comes to custards, you do not want to create any scrambled eggs.

When your simplified custard has reached the required temperature, take if off from the heat and cool the base as quickly as possible. Now add the brandy/cognac. The base should then be left in the fridge to mature for a few hours, or preferably over night, before churning.

A note on the brandy and the alcohol content:  In case you would like to reduce the amount of alcohol while retaining the brandy flavour, you could try adding the brandy to the mixture from the very beginning (the heating will make some alcohol evaporate, but despite the heating there will, however, apparently still be quite some left – just so you know). Personally, I prefer to add the brandy towards the end, when the ice cream base is about to cool down. 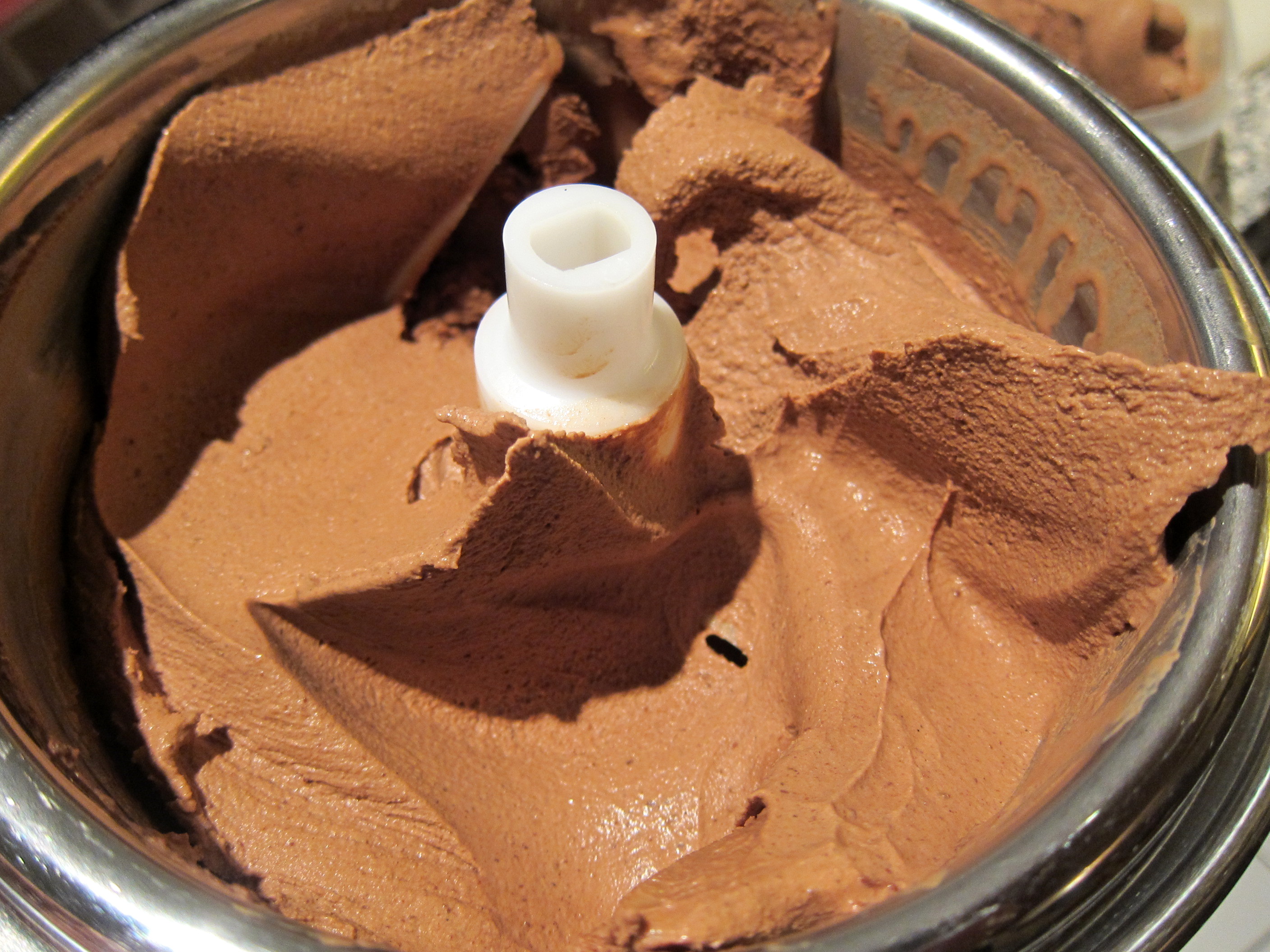 Some ice cream flavours just turn out to be SO much better than you ever could have imagined – and this is one of them!

I never believed that the rather simple combination of chocolate and brandy would create such an interesting, exquisite result. While obviously a type of chocolate ice cream, the Lumumba combination manages to create something unique … and absolutely delicious! The rich chocolate marries perfectly with the distinct, yet hard to identify, flavour accent brought by the brandy – a splendid example of when an alcohol can be more impressive in an ice cream than in a glass!

And the ice cream does not come over as “overly alcoholic” either. In fact, most friends who have enjoyed it have even failed to identify the brandy as an ingredient! The ice cream also receives high marks in terms of consistency and structure: the alcohol ensures that it remains scoopable and relatively soft even when frozen.

The Lumumba ice cream is a real gem, and ranks very high on my list of favourite flavours.  So, spare a thought to anti-colonialism and the ideals of Patrice Lumumba and try for yourself! 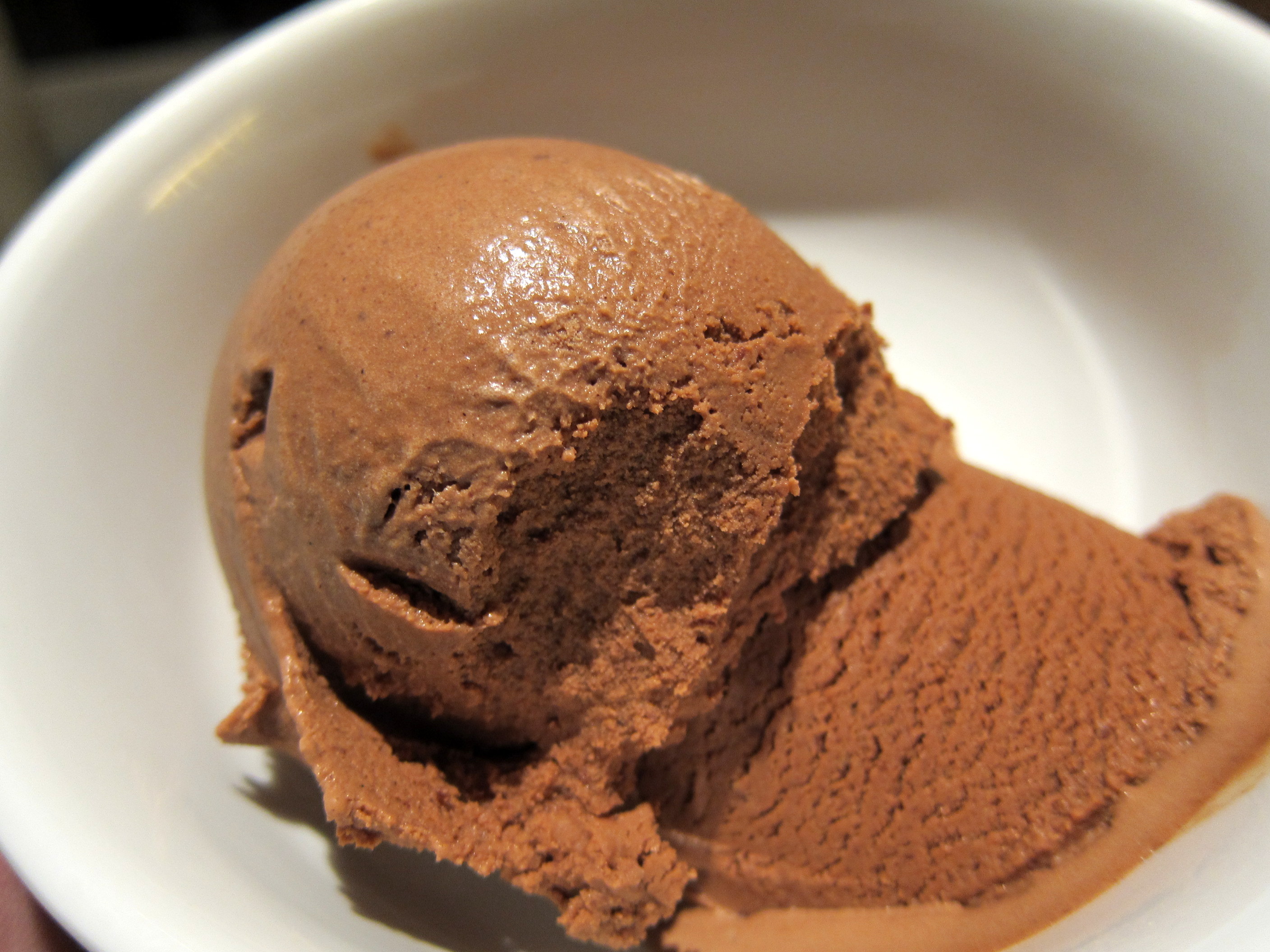 5.0 from 1 reviews
Print
Lumumba ice cream
By: Anders@icecreamnation.org
The classic Lumumba combination - rich chocolate and brandy - proves that some flavours can be SO much more than just the sum of its parts! One of the best chocolate ice cream varieties I have tried:-)
Ingredients
Instructions
Wordpress Recipe Plugin by EasyRecipe
3.2.1215
Share