Dear adventurous culture-lovers! Today, we are going to make ice cream on a culinary herb that has fascinated humans since ancient times: Thyme. Once hallowed to Venus and Aphrodite, Thyme has been used as a medicine, an aphrodisiac and for its purported powers to give courage, scare away evil spirits and ward off nightmares. Sounds like a perfect flavour for ice cream, don’t you think? 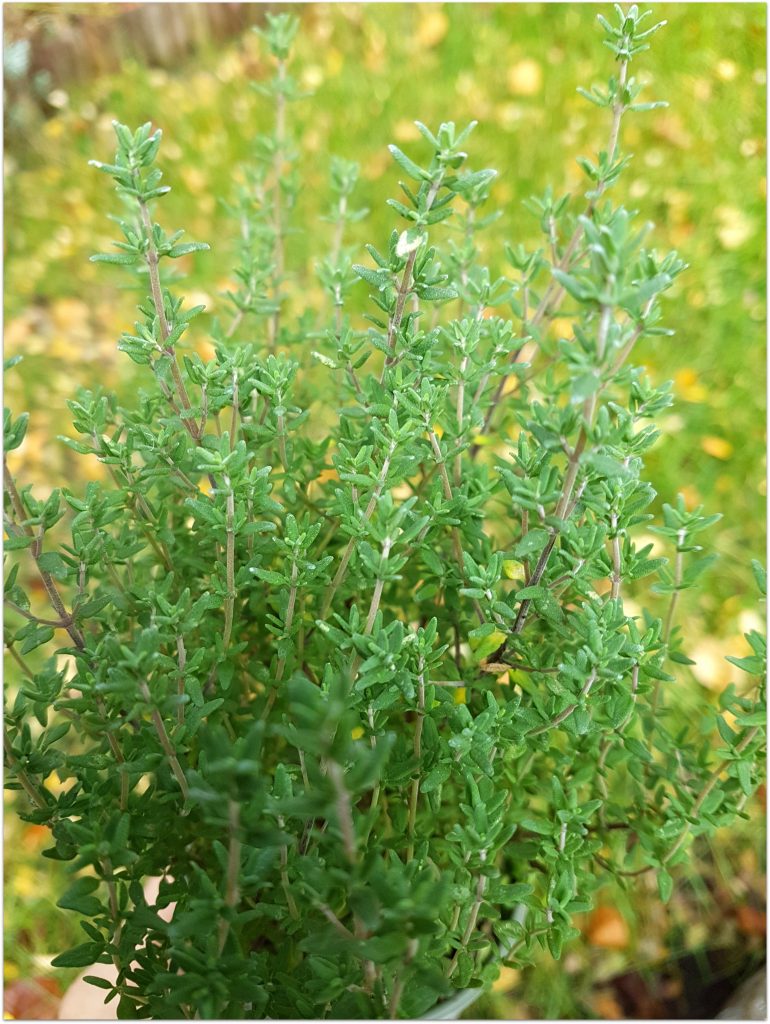 Thyme – humans have been adoring the many qualities of this perennial herb for thousands of years. Today, it is mostly used in cooking. But will it also work its magic in ice cream? 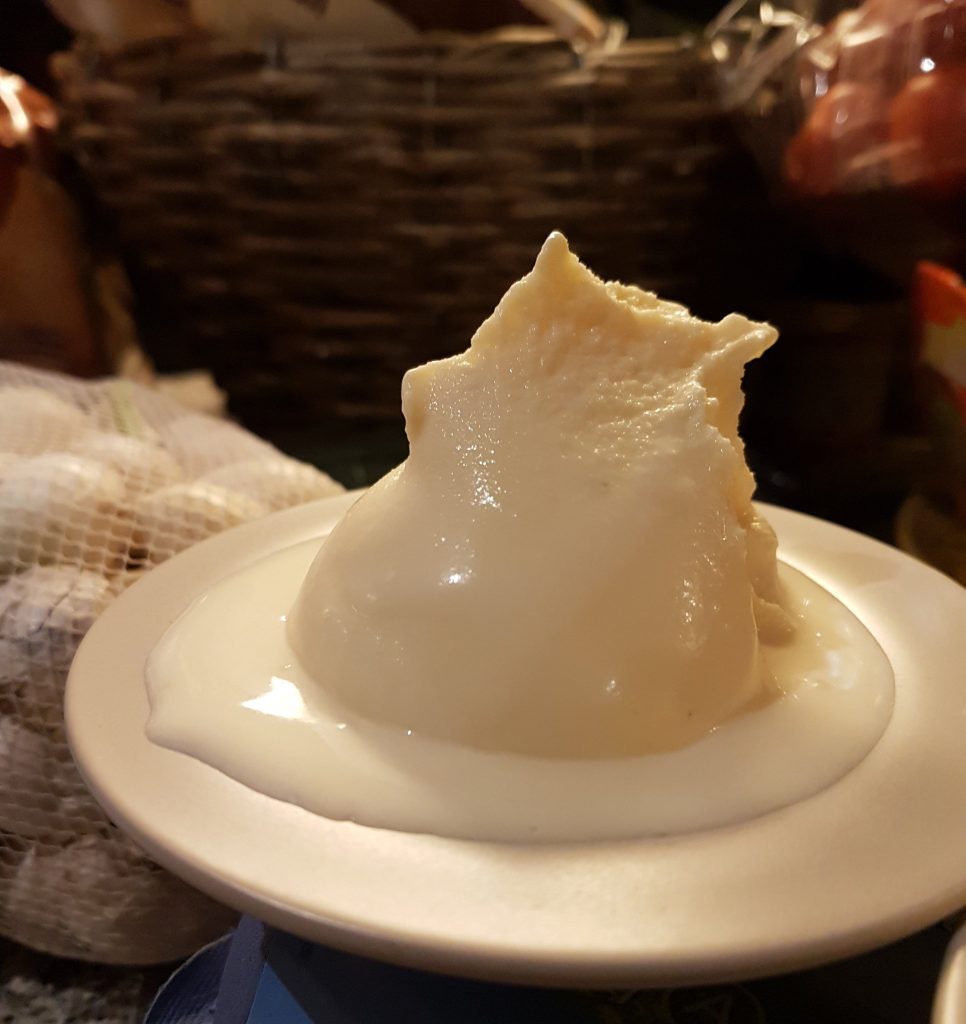 Thyme ice cream – good for both your mental and physical health, if you believe the old scriptures on the many beneficial qualities of the herb.

For all its good qualities, I would probably not have chosen Thyme for a flavour if it had not been for my ice cream friend Lena (of spoom– and gingerbread ice cream-fame). She told me that she tried Thyme ice cream once, deflected my initial scepticism and asserted that she had found the flavour delicious and very memorable. Since I have total trust in her taste and talents for frozen desserts, I decided to give it a try!

Herbal ice creams require some infusion, which called for a base that would be heated.

I turned to a light custard-base, courtesy of a recipe by highly acclaimed Belgian top-chef  Pierre Wynants. Why “light”? Well, the recipe contains twice as much milk as cream and “only” requires five eggs. And if it had been good enough for Comme Chez Soi (Wynants’ restaurant, at the time holder of three Michelin stars), the base would probably be good enough for me too. By the way – it goes without saying that this versatile base also can be used for other flavours than Thyme.

The custard base can be done in the modern, simplified way: Put most of the ingredients  in a saucepan (not the cream, though!), whisk well and – on medium- to low heat – bring the base to the so-called nappe stage: about 82-84º Celsius/189-183 ºF). Use of a thermometer is recommended!

Once the right temperature has been achieved, take off from the heat, add the cream and prepare to infuse the Thyme.

Putting the Thyme in the ice cream

While I’m sure that you also could use dried Thyme, I got myself some fresh Thyme. To make sure that you get a clear and strong Thyme flavour, I would suggest that you use about 30-40 grams – about two pots of fresh Thyme. On the other hand, you may actually prefer to go for a milder flavour (see below). In such a case, one pot’s worth of sprigs would probably be enough.

Cut off the sprigs, put them into the heated base and let infuse for at least 15 minutes.

Note: exactly how long you should infuse the Thyme also depends on how strong flavour you want. And, if using, remember that dried herbs tend to be stronger than fresh ones. If you feel uncertain, grab a teaspoon and test a little of the base to get a first idea. 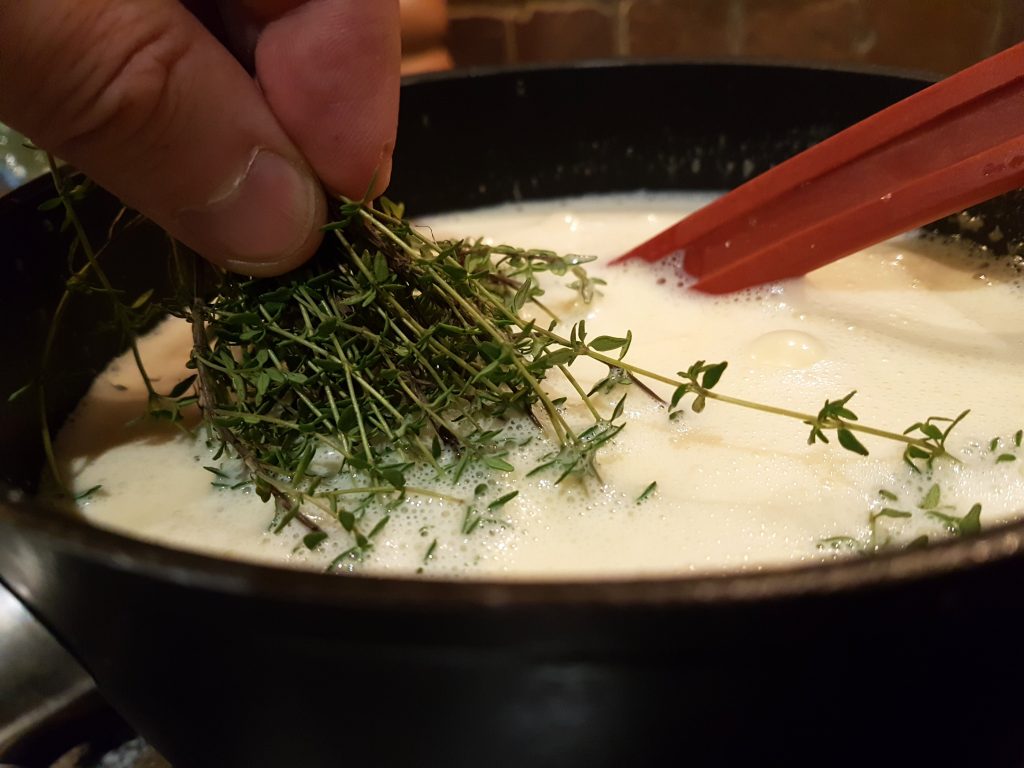 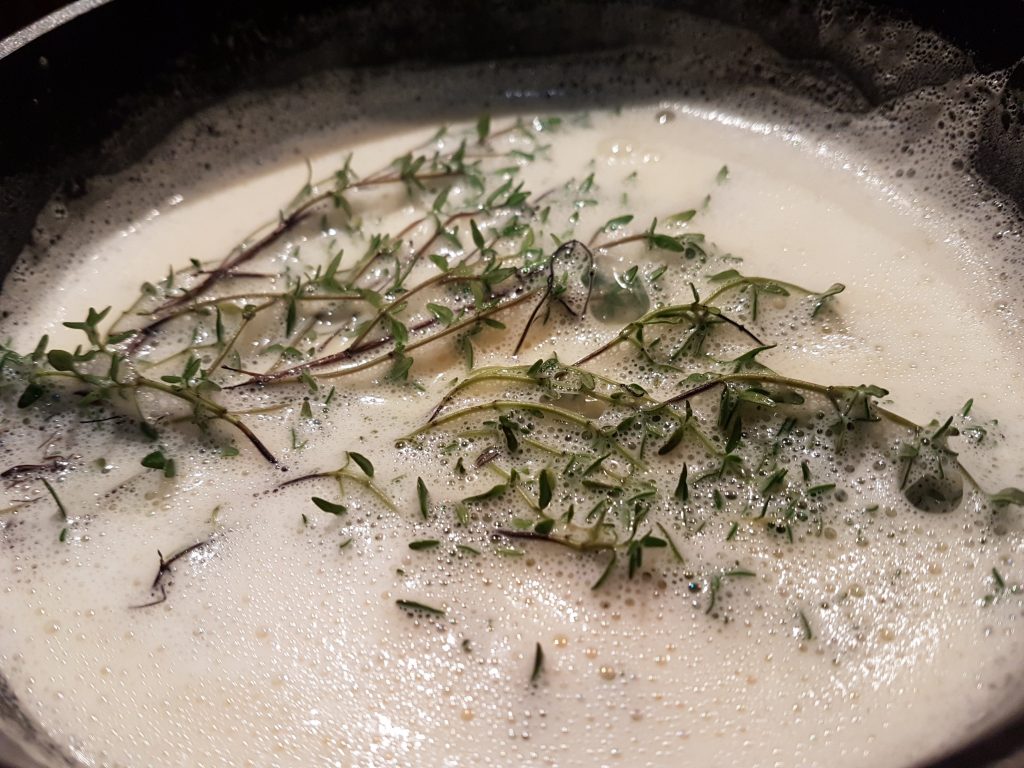 Infusing the Thyme sprigs in the base. Looks quite beautiful, does it not?

Once finished, remove the sprigs and let the ice cream base cool down and chill before churning.

A rare and special flavour, its strength up to you 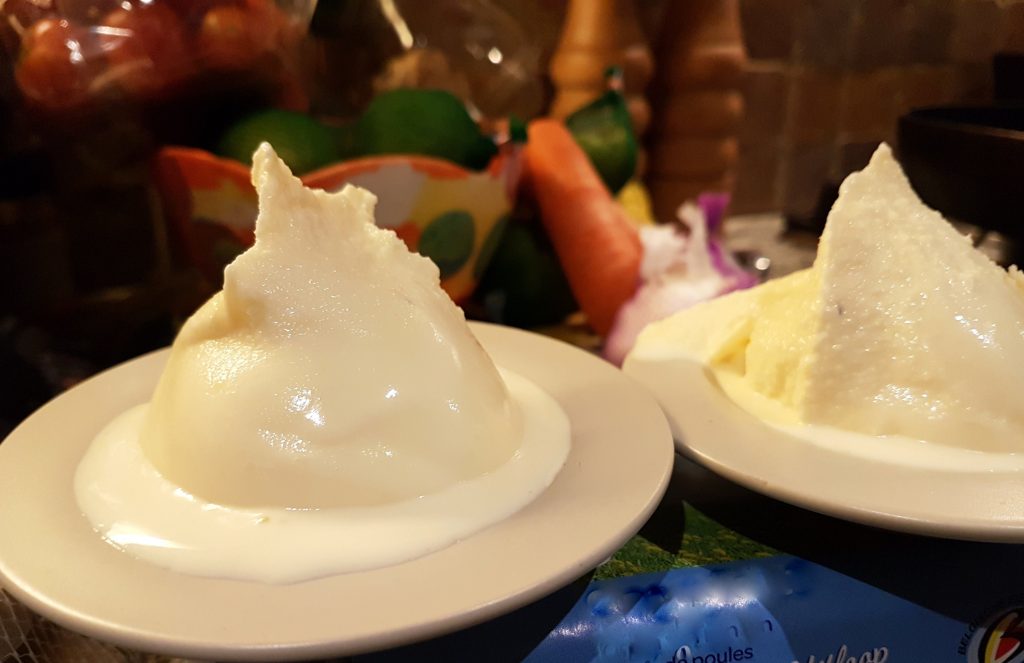 The Thyme gives the ice cream a very special flavour. With less infusion, it becomes sublime and difficult to pinpoint. If made with a stronger flavour strength, however, the Thyme comes across in a clearer (but still sweet) way, almost invoking associations to woods and trees. In fact, the strong variety actually felt like something of a distant cousin to the pine-like Greek Mastica ice cream).

The versatile base is a perfect vehicle for both types, and lends an overall light touch to the whole ice cream, along with great consistency and texture.  As a rule of thumb, I would guess that a milder Thyme flavour is likely to win more approval than a stronger. Both are fun to try but there is something particularly exciting about the mild variety: Most everyone will like the sweet and discreet flavour, scratching their heads about what – exactly – they are savouring.

I encourage you to experiment with the flavour strengths and expand your ice cream-horizons! And who knows? If the stories about Thyme carry any truth, you might not only get rid of your nightmares but also grow healthier and more courageous after testing out this frozen treat!

Print
Sweet Thyme ice cream
By: Anders@icecreamnation.org
This alluring recipe was Inspired by my friend Lena's fond recollections of once having had Thyme ice cream. The ice cream base follows a base recipe by famous Belgian chef Pierre Wynants, who once headed the famous, triple-Michelin starred, restaurant Comme Chez Soi in Brussels, Belgium.
Ingredients
Instructions
Wordpress Recipe Plugin by EasyRecipe
3.5.3229 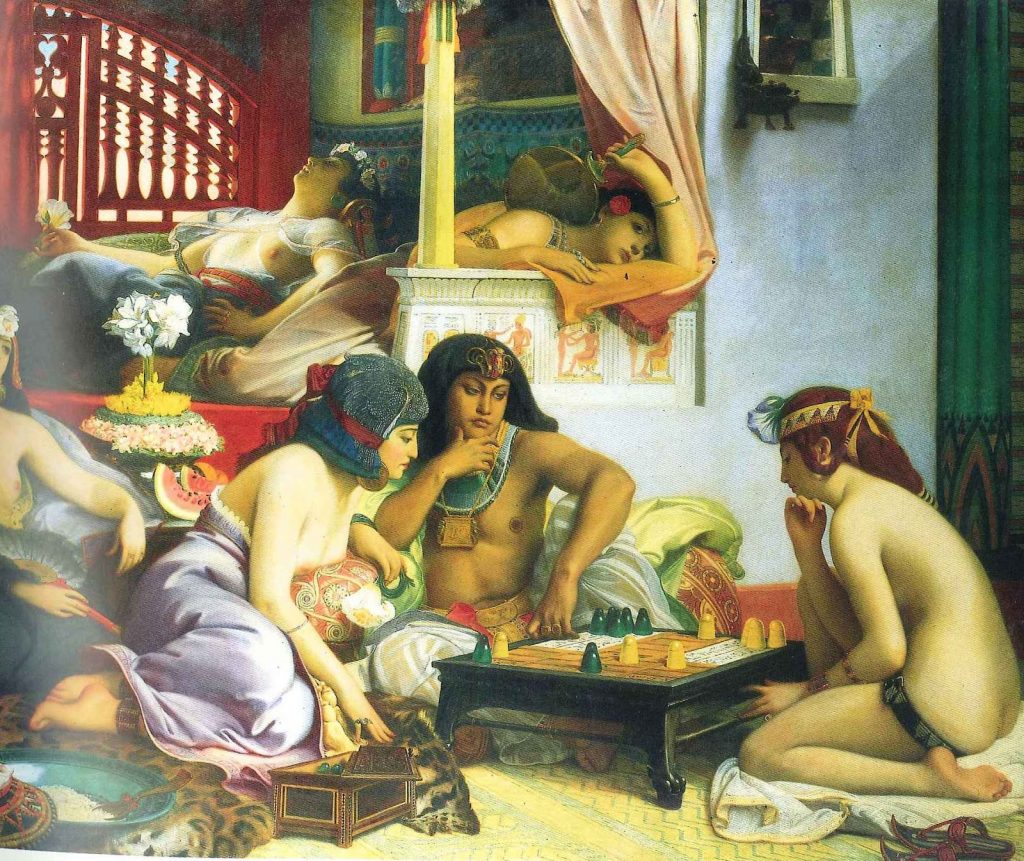 Waiting in vain for ice cream. Ramses III and his court had access to Thyme but lacked the technique to make the ice cream – the ancient Egyptians instead used Thyme to scare away evil spirits … and for embalming mummies!