Coca-Cola and Pepsi Cola are the undisputed giants of the world’s many cola soda drinks. And while you may have heard the stories about coca leaves [containing cocaine] being one of the original ingredients (at least for one major brand), today’s cola soda drinks typically contain caffeine (and a lot of sugar) for kicks.

And the typical cola flavour? No, it comes neither from coca-leaves, nor from caffeine (and probably not from the original kola nut either). The typical cola base flavour today is actually most likely made up of a flavour-mixture of vanilla, cinnamon and citrus fruits.

While I invite everyone to experiment with the base ingredients in search of your very own special cola-drink mixture (some already do!), this sorbet takes the easy way out – simply get yourself a bottle of your favourite cola-drink, and you are set to go! 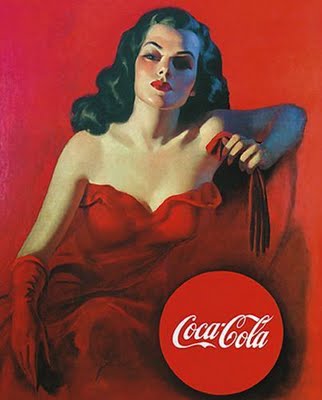 Coke, is it? Most cola drinks regardless of brand name will lend themselves well to this sorbet recipe

Colas tend to be very sweet soft drinks – a can of standard (non-diet) Coke boosts the equivalent of ten sugar cubes (or 65 grams of sugar, if you prefer).  And still, most of the soft drink is water. From that point of view, the soft drink itself is already quite similar to a simple sugar syrup (sugar plus water); the classic sorbet base.

For this reason, instead of preparing an additional simple sugar syrup, I opted for a “direct cola soda syrup” as the sole base: Cola plus sugar plus lemon. Because sorbets tend to require quite a lot of sugar, I would really recommend that you use ‘regular’ (i e non-diet) versions of your favourite Cola soda. If you use diet-types, you will either have to add all the ‘missing sugar’ back on your own, or end up with an unpleasantly icy and substandard sorbet …

And while (regular) colas are sweet, they typically won’t be sweet enough to serve as sorbet base on their own – you would need to add more sweeteners. The main issue will therefore be to make sure that the total sugar content is right:  too little sugar, and the sorbet is bound to freeze too solid and be unpleasantly icy. Or too much sugar, and the sorbet may turn out to be intolerably sweet and/or refuse to freeze properly.

Additional sugar – depending on what’s in your cola

You may be aware of the fact that commercial cola sodas are sweetened differently around the globe. Presently, colas in Europe tend to be sweetened by sugar. In the US, however, high fructose corn syrup seems to be the preferred choice of the industry.

Being situated in Europe, I used some  Agave nectar (a type of inverted sugar) as my additional main sweetener. Why? To show off my broad range of exotic ingredients? Actually, I did this in order to secure a slightly less firmly frozen end result:  inverted sugars tend to make ice creams and sorbets freeze softer. This is exactly the same important general effect that ‘ordinary’ sugar also has on frozen desserts (apart from bringing sweetness, that is).  The main advantage is that inverted sugars require smaller doses.  Some types, like the Agave nectar, also does it without adding so much “sweetness” to the flavour as corresponding amounts of ordinary sugar would do. And since a typical cola drink already contains so much sugar, there should not be any negative consequences for the final overall flavour either. Still, you might well stick to using only ‘normal’ sugar throughout if you like. If you do, however, you might want to add more citrus juice to counteract an overwhelmingly sweet end result.

But – If you are in a country where the cola sodas already are sweetened with inverted sugar (corn syrup being one type), I would suggest that you stick to adding only ‘normal’ sugar. 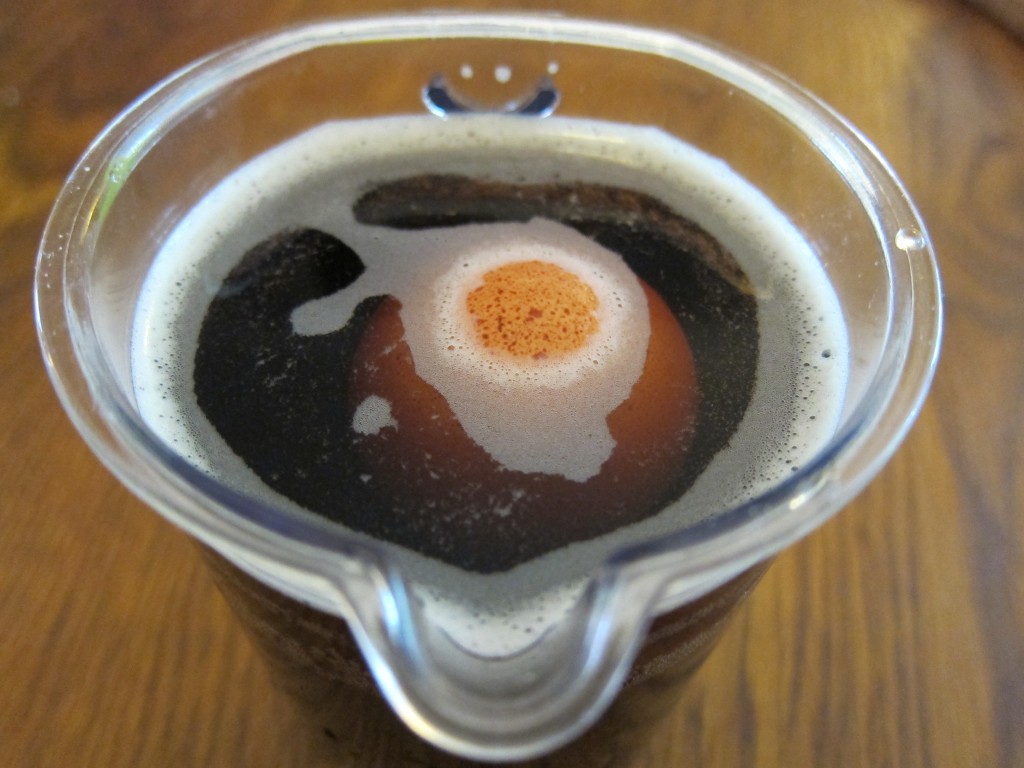 The Egg test, here applied to a Cola sorbet base

There are special instruments for those who want to ascertain the correct sweetness-levels for sorbets. But luckily, as described in the general post on making sorbets, the home cook could well get away with cleaning a raw egg and doing the Egg test.

Once the sugar content is right, make sure to chill the sorbet base. When the base is cold, optionally add a whipped egg white for improved, lighter consistency once frozen (if you are concerned about using raw eggs and/or intend to enjoy the sorbet rather soon, you might well skip the egg white). Then churn the sorbet base  in your ice cream machine according to instructions.

No ice cream machine? You can still make the sorbet in your freezer, the still-freezing way. 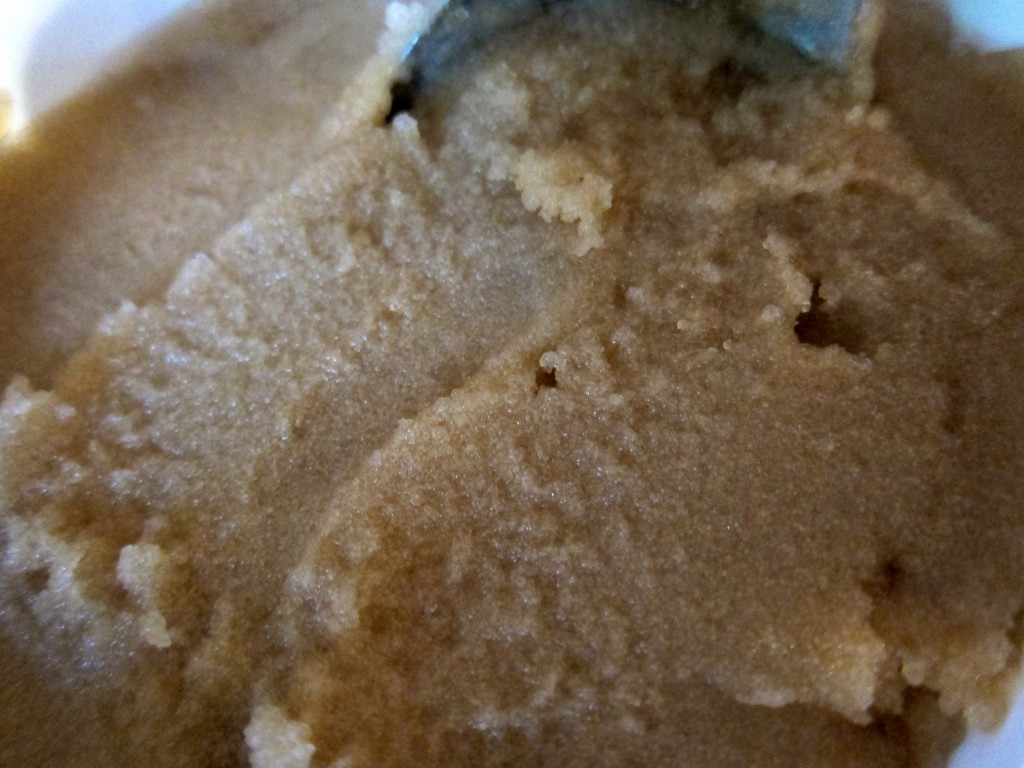 Cola sorbet … fresh from the churning

While ice pops might be made by simply freezing cola drinks right away, using the cola sorbet base makes for even nice pops!  Why? Unlike “cola drinks only”-pops, the consistency of the cola sorbet will be  less like ice and more like sorbet! To make your cola last longer, you may also consider using the ‘Economy’ Cola sorbet recipe below.

Economy Cola sorbet (recipe, version 2), or How to get the most out of your Cola-bottle

In case you want to economise your cola drink, you may well prepare your sorbet along the standard sorbet formula too: Cola + simple sugar syrup + lemon. 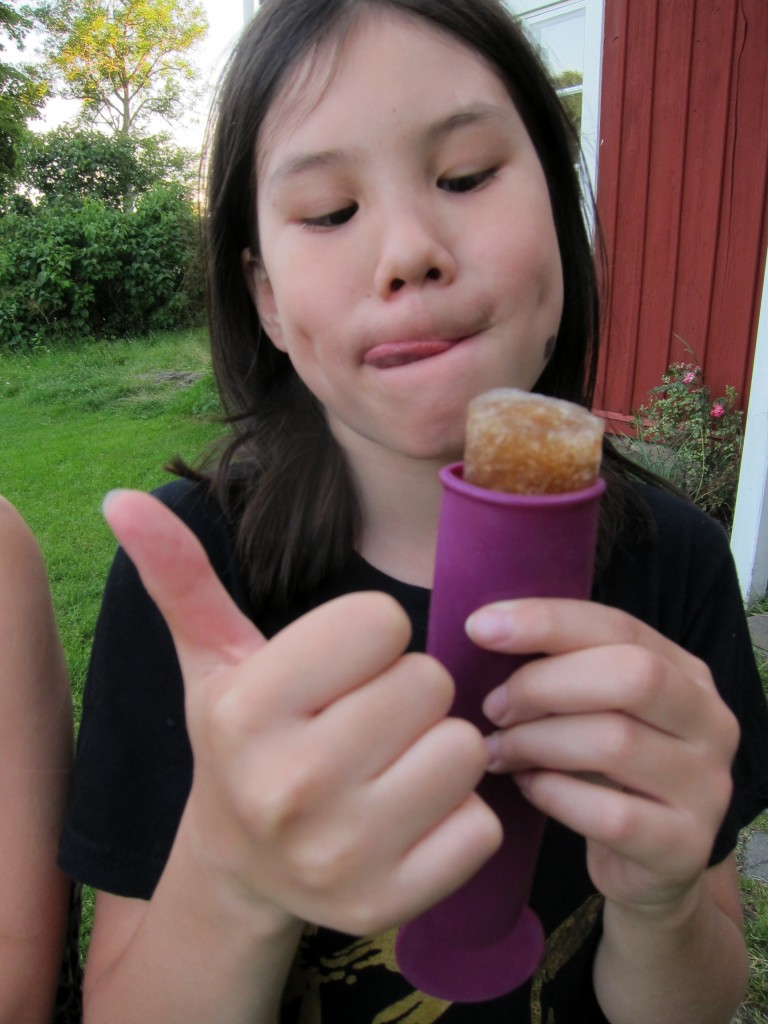 Thumbs up for ice pops made with cola sorbet base  (here, the ‘economy’ version). “Exquisite!” according to my young taster, who – to my great happiness – soon after eagerly took up successful cola sorbet production on his own:-)

In this case, you mainly use the cola for flavouring and then add more simple sugar syrup (made up of equal parts sugar and water) for volume.

While you may want to experiment with the proportions yourself, 1 part cola to 2 parts simple sugar syrup should work out nicely. As in the recipe above, test the overall sugar level with the Egg test, and remember to add lemon juice/lemon zest to counter a too sweet end result. 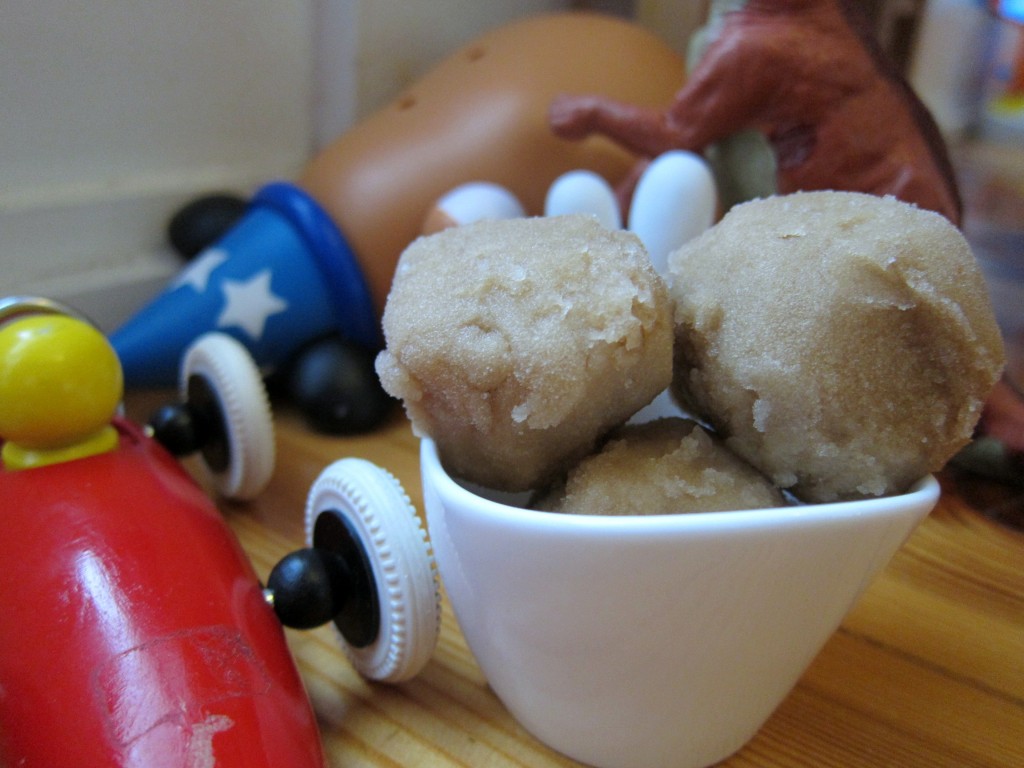 If you like the flavour of Cola, this sorbet is a winner.

The cola enthusiasts amongst family and friends have been unanimously happy with the final results – true cola flavour in refreshingly frozen form!

And as a parent concerned about the kids’ possible over-consumption of soft drinks, I happily noted that a few scopes of Cola sorbet (although admittedly sweet) actually represent a quite limited amount of actual cola … and even less so, when the sorbet is prepared with sugar syrup (‘economy’ style).

And by the way – if you are fond of other soft drinks than from the Cola-family, the approach in this recipe can easily be adapted to any soda flavour you would like to try in frozen form:-)

Print
Cola sorbet
If you like the flavour of Cola, it is hard to beat the feeling;-)
Ingredients
Instructions
Notes
As with most sorbets, be careful not to over-churn the sorbet. Rather than letting it over-churn, rely on the freezer to put the finishing stabilising touch to the sorbet. The (optional) whipped egg white will improve the consistency of the sorbet, but will matter more in the cases where you do not plan to enjoy the sorbet relatively soon after churning (in other words, no need for egg whites if you intend to serve the sorbet soon after preparing it!) The Agave nectar (or similar inverted sugar) is useful for improving the consistency of the sorbet without adding too much sweetness. If you do not use inverted sugar, be prepared to add more sugar (and then, suggestively, even more lemon juice). You can also prepare this recipe in the traditional sorbet way, using a simple sugar syrup, mixed with some Cola soda, and lemon juice. You should use the Egg test to get the sweetness level right, but a good starting point could likely be one part Cola soda per two parts simple sugar syrup (and the simple sugar syrup could be made up of equal parts of sugar and water).
Wordpress Recipe Plugin by EasyRecipe
2.2.8
Share