Mint ice cream a bit too tame for you? Add some cold steel to it with the help of  jalapeño pepper!

Mint is a prolific plant (in terms of cultivation, it is even considered “invasive”) and its fresh, fragrant leaves can spice up not only tea and chewing gum, but has also a prominent place in many cooking traditions.  And of course – you can also make mint ice cream!

While those in a hurry might be inclined to just pop a few drops of concentrated mint extract into the ice cream base, I decided to take the slightly longer route and prepare mine on the basis of fresh mint leaves.

My point of departure was a recipe by the incontournable David Lebovitz. But what originally sparkled my interest was actually the  idea by the late Steve ‘Doc’ Wilson (known for his Guinness world record collection of antique ice cream freezers) to prepare a mint ice cream with jalapeño chile pepper.

Just to make sure that the final results would cater for all tastes, however, I prepared two batches – one with fresh mint only, the other one with fresh mint and fresh jalapeño. The vanilla in the recipe nicely complements the main flavours, rounding off the tasting experience in a very nice way. 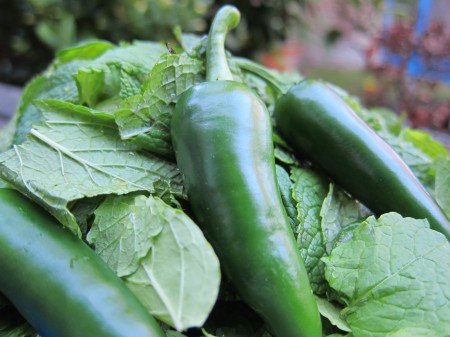 The central matter in the preparations is picking the leaves of (quite a lot of) fresh mint.

Secondly, let these mint leaves steep in milk for at least an hour or more.

Thirdly, remove them from the milk by using a sieve, making sure to squeeze out as much as possible from the leaves. 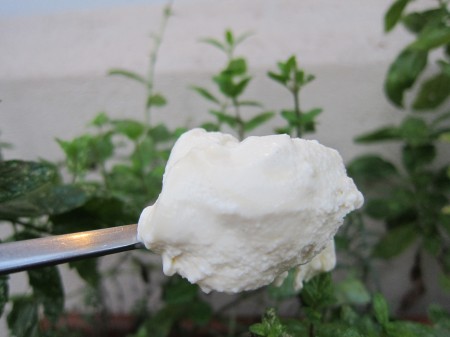 When it comes to the chile pepper family, Jalapeño pepper is a personal favourite of mine!  With beginning heat levels around  2,500 Scoville,  Jalapeño is often considered a relatively  mild chile pepper.  I find it pleasantly hot-but- not-too-hot, and with a great flavour that offers so much more than mere heat.

It surprised me, but the jalapeños in this recipe did not really make the ice cream downright “hot” (in the sense that chile peppers  so often do, like in this recipe). Instead, they added a firm, refreshing “backbone” of general strength to the overall flavour. Clearly reinvigorating and very nice in combination with the mint, but more “steely strong” than “chile hot”, if you follow my associations.

If you are only making jalapeño mint ice cream, you could let the peeled and chopped pieces of pepper infuse together with the mint from the very start.

If you want to make two different batches from one round of preparation, however,  I suggest that you take about 100 ml of the mint-in-milk infusion and add the peppers.  While continuing to infuse the rest of the mint leaves separately, the peppers are infused on the side. When infusion is over and it is time to churn (and you have properly squeezed all the mint leaves dry), you divide the available ice cream base in two batches – making sure that the peppery infusion only ends up in one of them. Whisk well and churn! 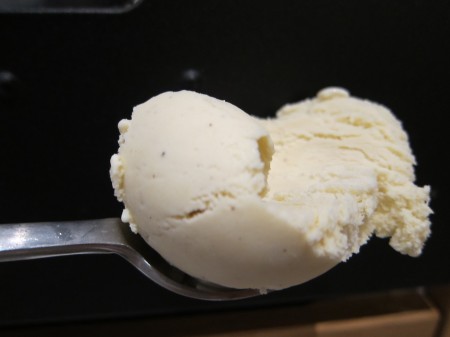 A few notes on the strength of the flavours

Since we are working with fresh herbs and peppers, the flavours will not be as strong and concentrated as when using extracts or dried herbs/peppers. The ice cream recipe actually produces quite a mild-mannered tasting experience (yes, that goes for the jalapeño-version too!)

I used about 60 gr fresh mint leaves (equalling, approximately, 3 pots), and would advise against using less. In fact, if you want a strong mint flavour, you would likely have to increase, perhaps even double, the amount of leaves.

When it comes to the jalapeños, it should be noted that dedicated fans of chile peppers may want to increase the strength – this is easily accomplished by infusing also the seeds and interior of the peppers, or by using dried peppers.

Print
Fresh Mint and Jalapeño ice cream
Pleasant herbal ice cream, combining the sweet freshness of mint with an invigorating "steely backbone" of jalapeño.
Ingredients
Instructions
Notes
Should you prefer to only make fresh mint ice cream, feel free to omit the jalapeño peppers altogether. Would you like to try both flavours side by side, make sure to let the peppers steep in a smaller quantity of dairy, separate from the mint leaves. When it is time to chill the ice cream base, add the pepper infusion to (a bit less than half, since the peppers also bring some dairy infusion) the mint leaves infusion. Put in the fridge, let chill and churn each batch separately.
Wordpress Recipe Plugin by EasyRecipe
2.1.7
Share