Summer in the tropics anyone?  Regardless of whether you’ll be spending time where the coconut palms grow (I won’t), most of us will still have the chance to enjoy this delicious frozen tropical blend!

On Pineapples and Coconuts 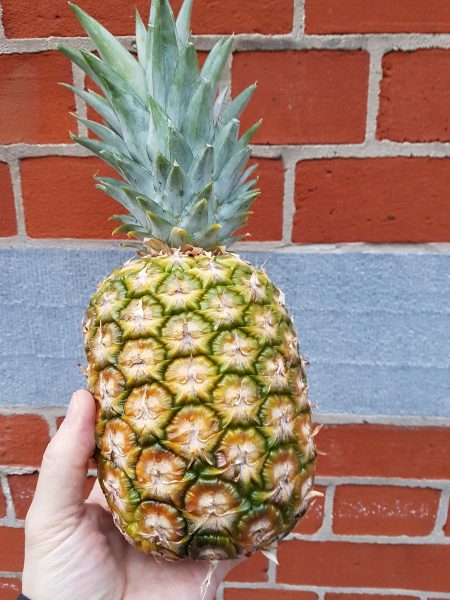 Pineapples originally came from South America, and having conquered that continent, the fruit spread onwards to the Caribbean, Central America, and Mexico. The Mayas and the Aztecs cultivated pineapples and Columbus reportedly met his first pineapple in 1493 on Guadeloupe. The fruit did not travel well, but the Spaniards nevertheless managed to bring at least one back to Spain in edible condition. This quickly set off a craving for the rare and exquisite fruit among the rich and powerful (for instance by the creation of enormously costly hothouses to grow the pineapples in the temperate climate of Europe – “pineries”): in fact, it is believed that the pineapples – now a symbol of wealth – mainly were used for display, not eating, at dinner parties …

In the meantime, the Spaniards  brought the fruit to the Philippines, and to Hawaii, Zimbabwe and Guam. The Portuguese took the fruit from Brazil and introduced it into India.  In the early 1900s, US companies such as Dole and Del Monte began large-scale pineapple cultivation.

Coconuts grow on the Coconut Palm,  which is believed to have originated in an area somewhere between Soutwest Asia and Melanesia, from where it spread out in mainly two branches – the Pacific and the Indo-Atlantic one. Spanish and Portugese explorers encountered the coconut in the early 1520’s, and today the palms are grown in more than 90 countries and territories of the world, with most of the production taking place in tropical Asia (notably in Indonesia, the Philippines, and India). Botanically, the coconut is not a nut, but a drupe. Incredibly versatile, they are used in a number of ways, from food to cosmetics. The coconut also has cultural-religious significance, particularly in Indian Hindu rituals (and in the rather strange and long-since defunct Vietnamese Coconut religion of the 1960s). 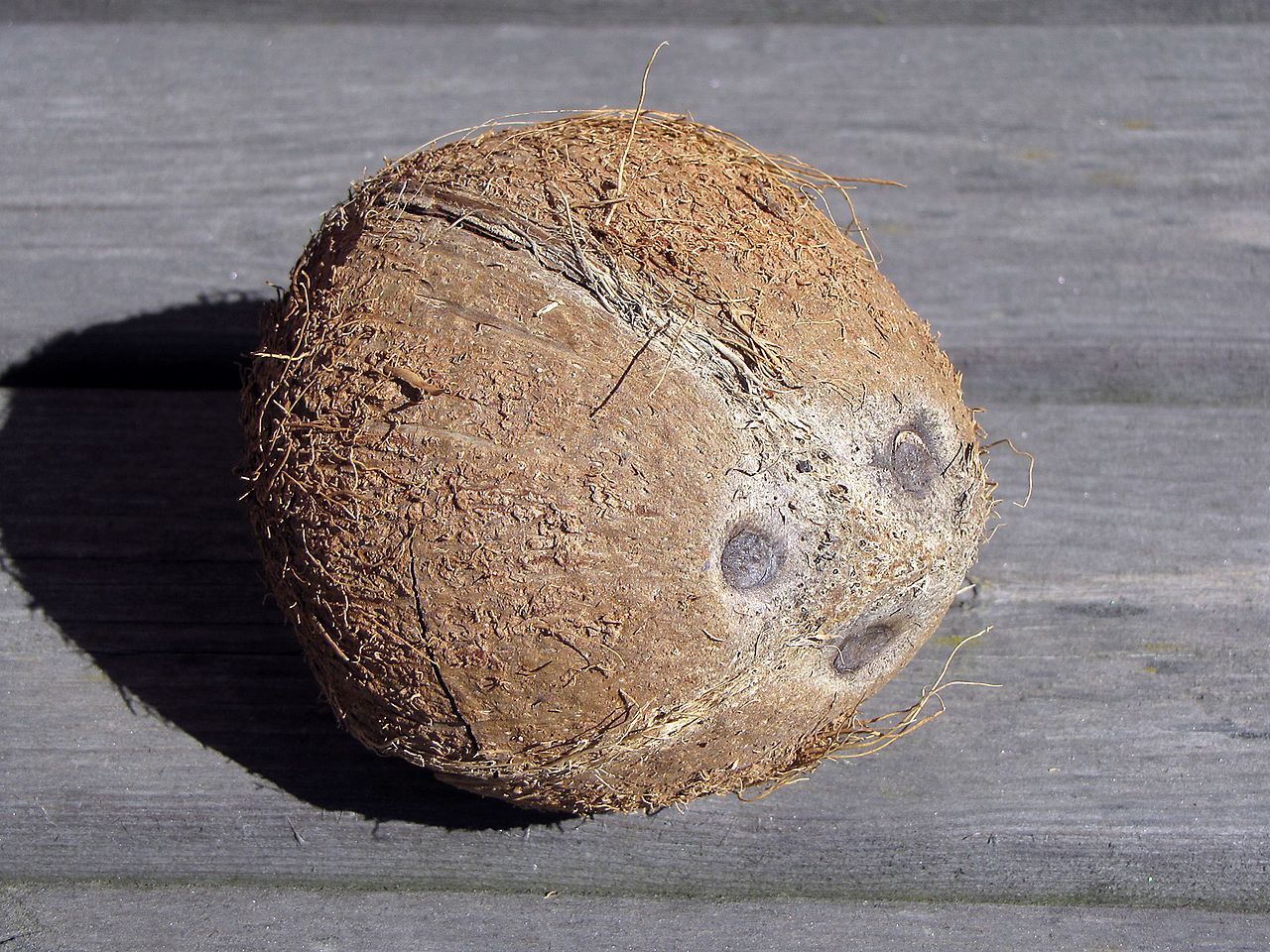 “Coconut” derives from the 16th-century Portuguese and Spanish word “coco”, meaning “head” or “skull” (after the three indentations on the coconut shell that resemble its characteristic “face”. (Photo by Petey21).

While coconut and pineapple each can be done and enjoyed on their own as ice creams, I figured that combining them could create a nice combination: one of my favourite nordic commercial ice cream producers  3vänner (“3friends”) has come up with a great one, for example.

Since you need two batches for this recipe, it is really up to you in which end you start. They should in any case be done one after the other, and in here, I’ll begin with the Pineapple sorbet and then move on to the Coconut ice cream.

For the pineapple sorbet, I used the “fruitpurée and sugar”-only sorbet method, cut out the simple sugar syrup normally used with sorbets and kept to the “4:1 golden proportions” advocated by Max Falkowitz: four parts fruit purée and one part sugar. I mixed it all well and – although this is optional – added a couple of tablespoons of inverted sugar (this time glucose) for the sake of improved consistency and scoopability. 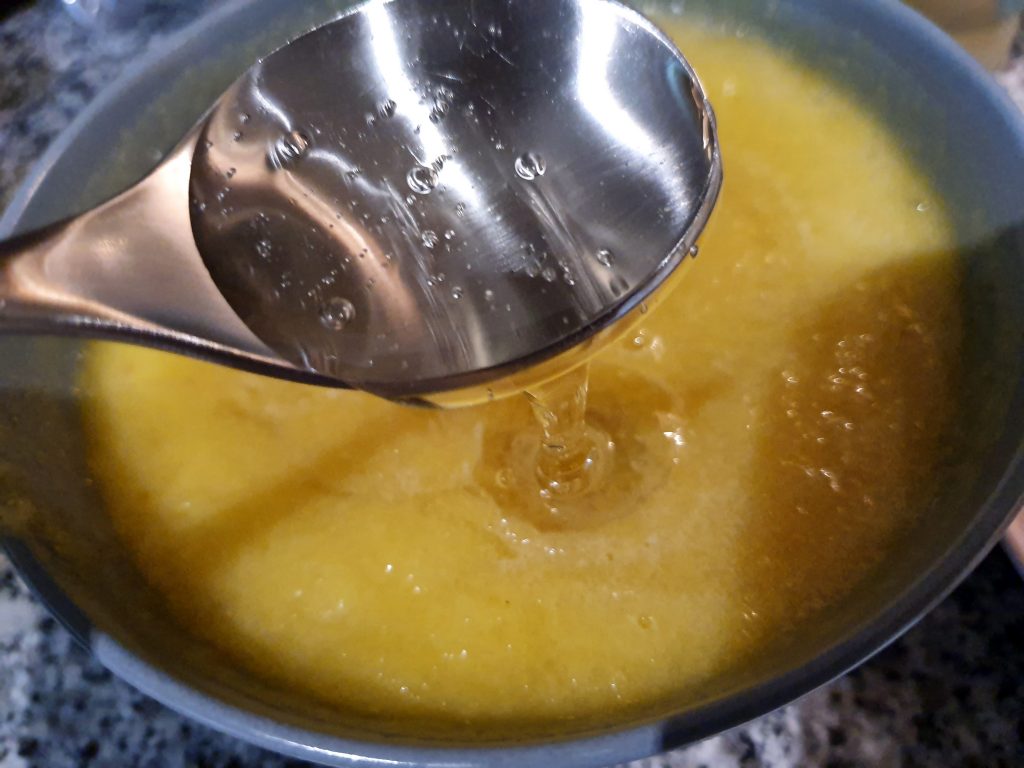 Pineapple sorbet the “fruitpurée and sugar-only” method: Here, however, I also add a couple of tablespoons of inverted sugar (glucose, in this case) for added scoopability and improved texture.

Then, just churn this sorbet base and you have the first ingredient for our combo! 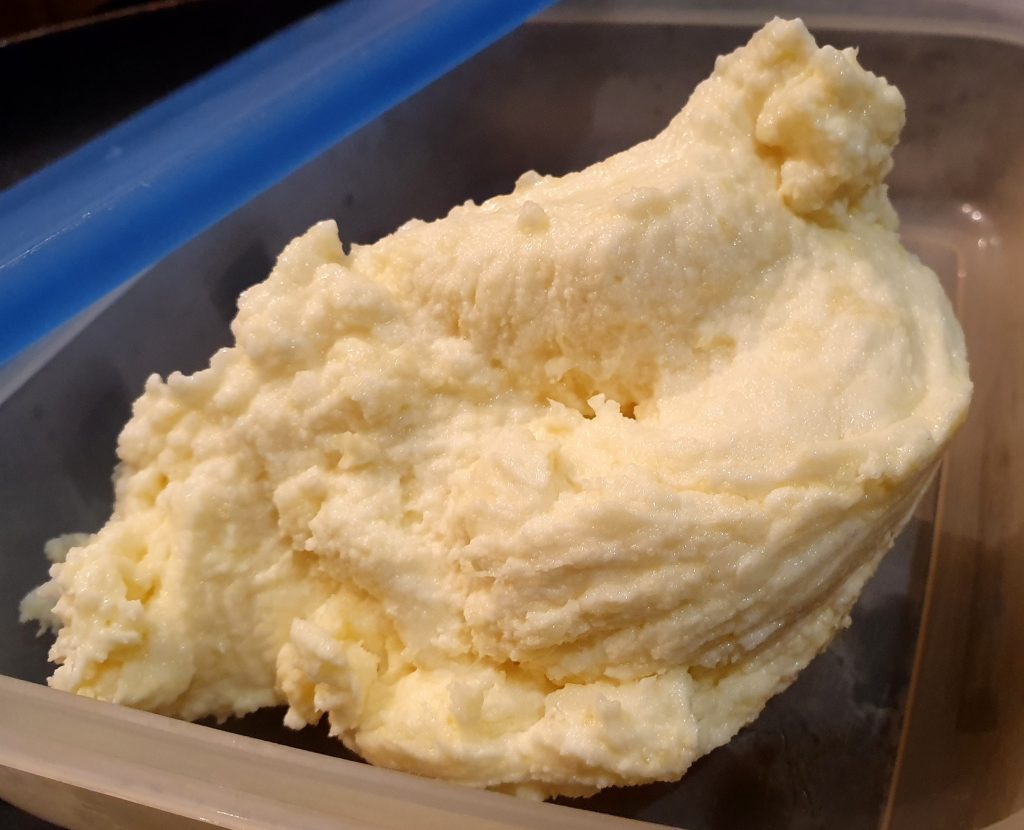 The Pineapple sorbet is delicious in its own right. Remember that nothing stops you from simply making a pineapple sorbet and enjoy on its own in case you might prefer this 🙂

Once the pineapple sorbet is finished, put it in the freezer to firm up a bit more while you make the Coconut ice cream.

Coconut milk (or “cream”, depending on the degree of fatness available to you) is rather fat, so there should be no need for any extra dairy cream. Which means that our ice cream actually will be a vegan one. 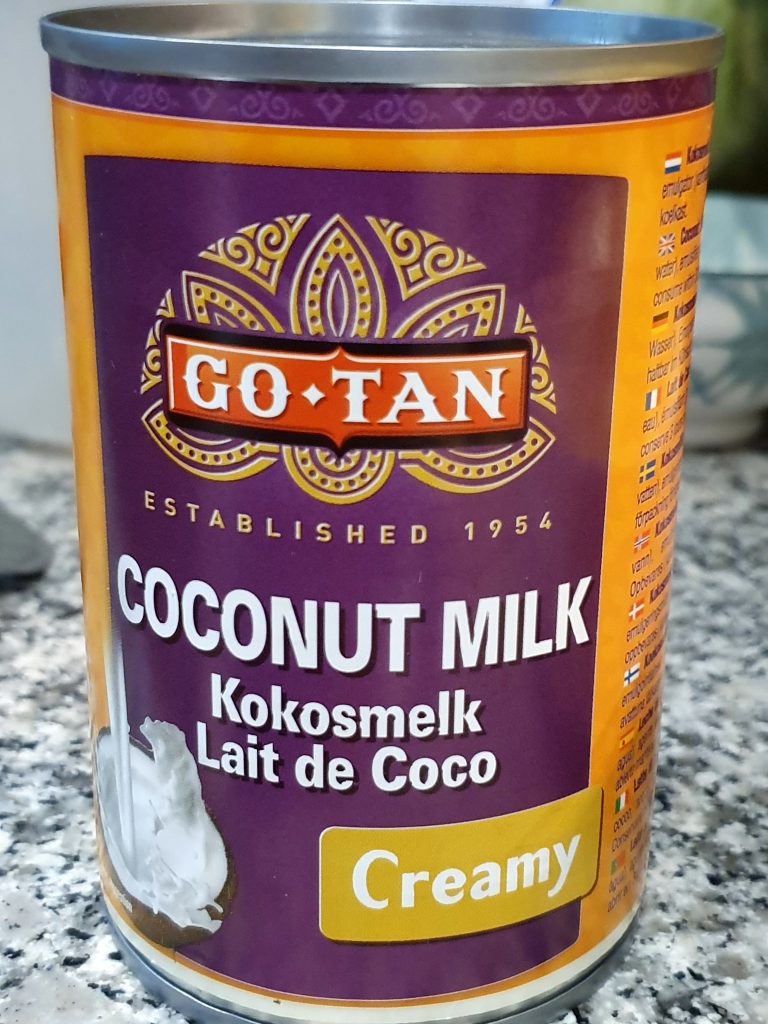 There are no real international standards, but the fatter and creamier the coconut milk, the better your ice cream will be. Check the label and buy accordingly.

Luckily, I already had just the right  coconut ice cream recipe for the job. You may exclude the coconut flakes (the batch shown here did not use it) but I would really recommend to put them in for the best overall experience! 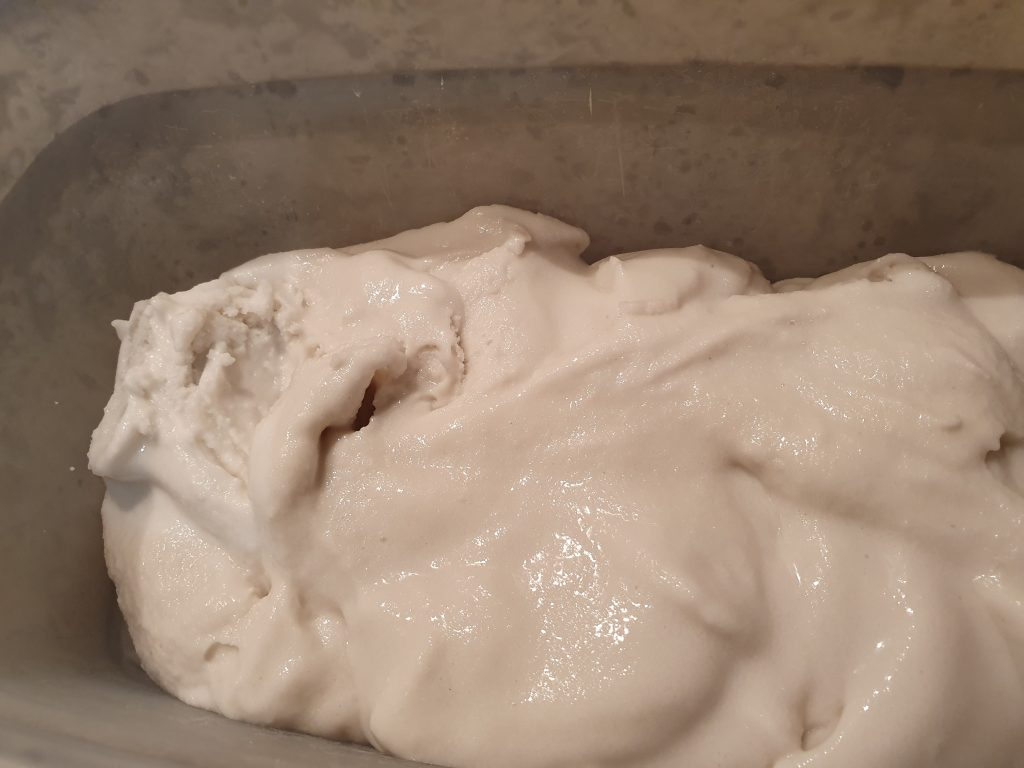 Coconut ice cream – just churned, and firm enough to be layered with the pineapple sorbet.

… and the layering of the two!

Then add a layer of the pineapple sorbet, and top with a second layer of coconut ice cream: Finished! 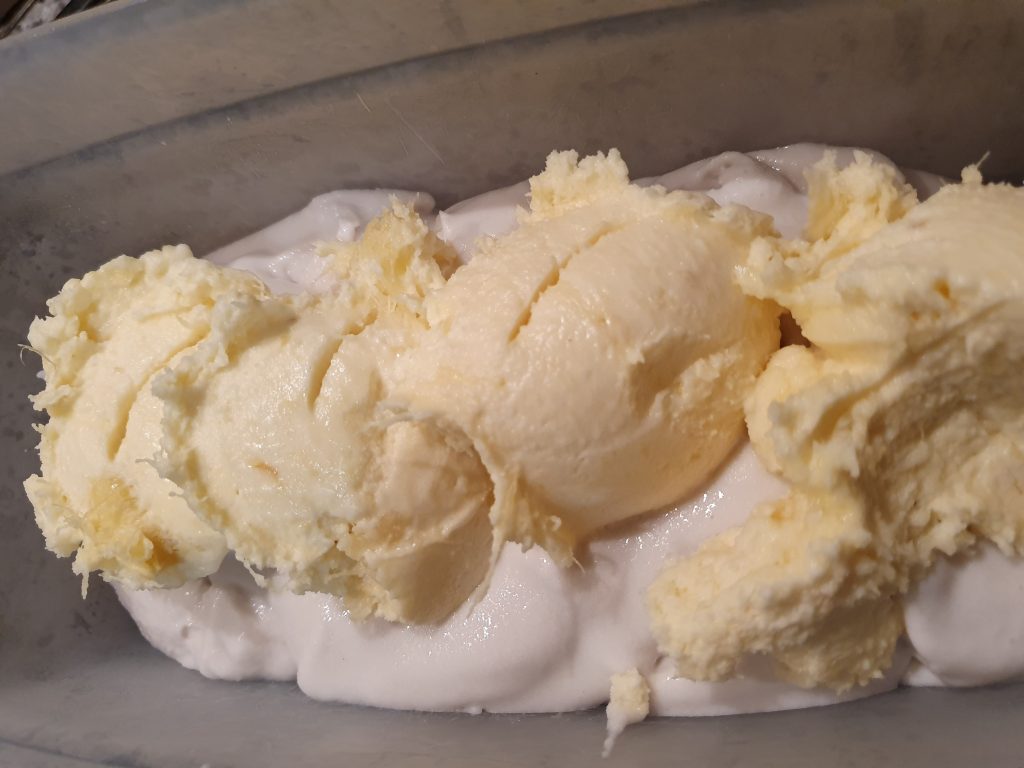 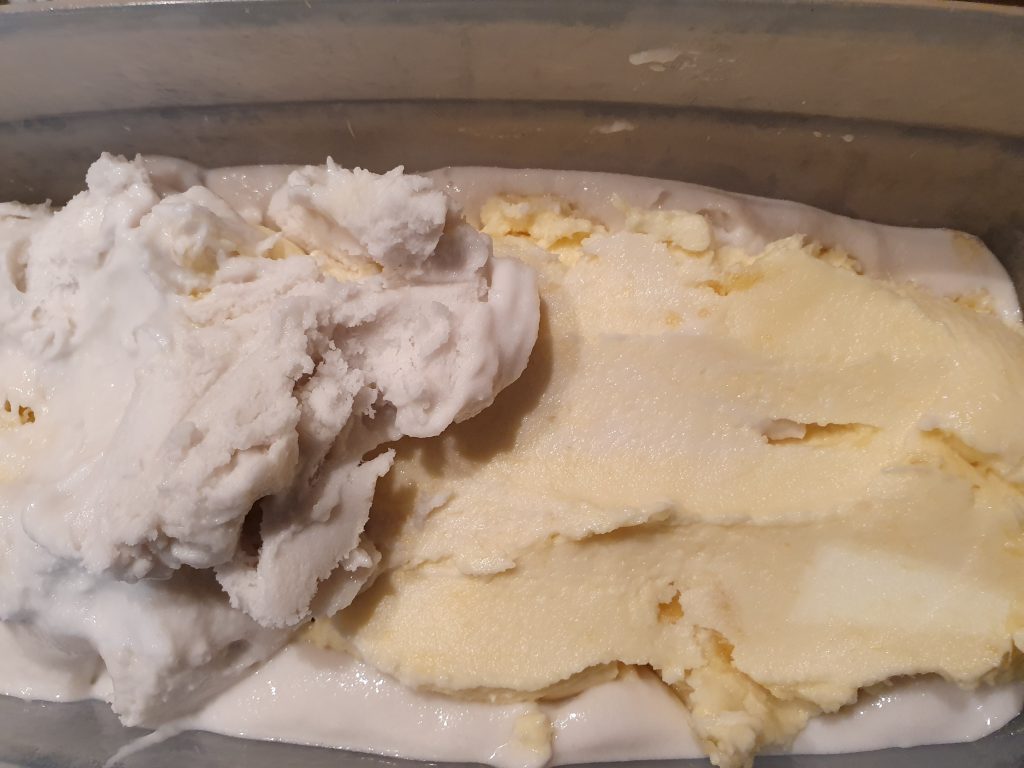 The third and final layer about to be put in place.

Once all three layers are in place, put the container in the freezer and let it all firm up before serving! 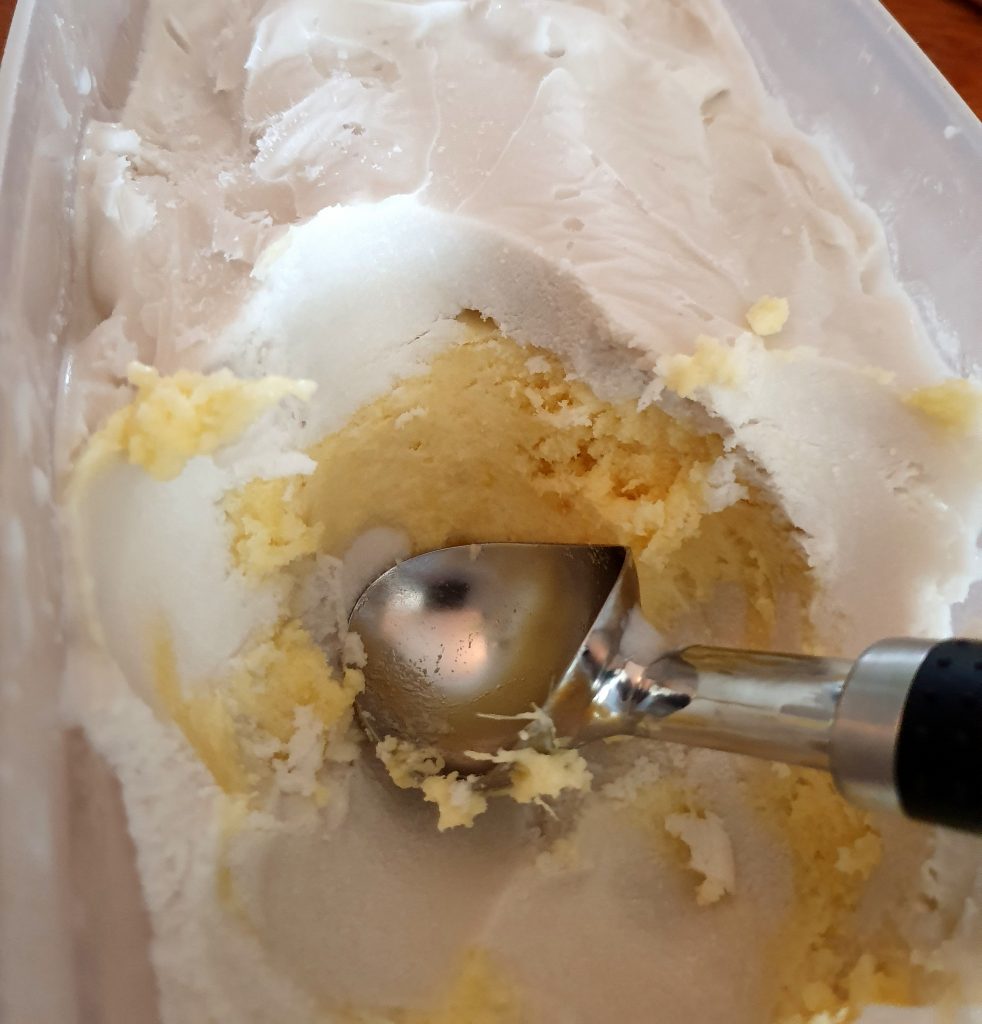 Layered and ready to be served and enjoyed!

Some flavours take you places – this is one of them! Take a spoonful  in your mouth, close your eyes and imagine that you’re on a sunny, tropical beach. With a little imagination, it should not be too difficult to imagine a friendly ice cream vendor mixing this frozen delight just for you – using locally produced pineapples and coconuts, of course.

But even without the tropical dreaming, this combination is a very nice and summery experience – both flavours are great on their own, but they do go together perfectly! Some of my younger tasters told me that they liked the pineapple-part better than the coconut part, but the adult member of the panel assured me that he found the combination great.

Should you think that you yourself might be more partial to pineapple, by all means change the proportions: nothing stops you from making the pineapple the dominating flavour. Yeah – you might even decide to stick only with the pineapple sorbet if you feel like it 😀 .

What I do know is that you definitely should try this delicious blend! So get hold of a pineapple and some coconut milk and get churning – quickly! Whenever I think of coconuts, I am reminded about the chorus trio “The Coconuts” who accompanied the unforgettable Kid Creole. Check out their “Did you have to love me like you did?” and note the aptly shaped vinyl record it came on back in the days.