Ah – India … even if you have not yet visited this fascinating country, chances are that you have tasted Masala Chai: black tea with warm, aromatic  spices, typically  served quite sweet.

Masala chai comes in countless different variations, and often tends to be more flavoured by the exciting spices than of the actually tea involved – in other words, a perfect candidate for an ice cream flavour! 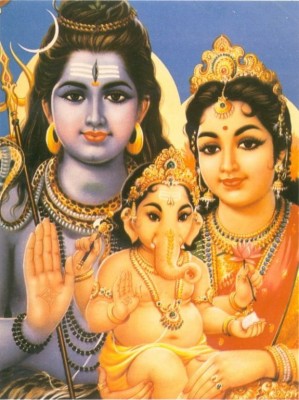 While you wiill need to open your mouth, opening your ‘third eye’ is optional;-)

Contemplating what to use for the ice cream, I found original inspiration when leafing through  Marilyn & Tanya Linton’s  “The ice cream bible”.  Unfortunately, their  recipe contained quite a lot of water; a trial-batch turned out much too “thin and icy”,  both in terms of consistency and flavour.  It might have worked for  lollipops , but I wanted more body and less iciness. At the same time, I did not really fancy anything mainly based on cream either …

All things considered, I finally decided to go for a base of crema rinforzata (= Sicilian gelato-base), where the main stabilisation comes from starch.  In the end, the only thing that I took with me from the Lintons’ recipe was their well-calibrated blend of  the spices.  And like them, I also did not include any actual tea. Surprising? Yes, but the ice cream still conveys a good flavour blend, quite faithful to the concept of masala chai.

In case you would like to add tea, however, I would suggest that you use black tea. You could test with about 2 teaspoons (safely contained in a suitable tea infuser) or 2 teabags.  Add them to the spice-cream-milk-sugar mixture (step 2 in the recipe below) just when you first take it off the heat.  Let the tea infuse for ten minutes, then remove it –  you don’t want to infuse the tea so long that it begins to release all its bitter tannin! 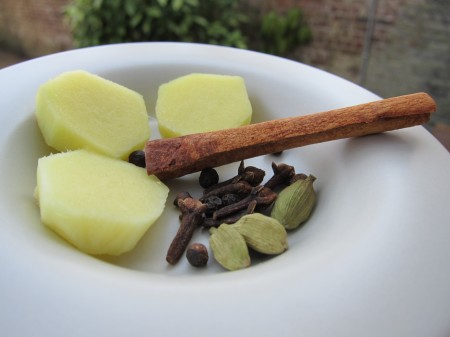 All the spice you need

Bring out a mortar (or any MacGyver-inspired alternatives) and crush the spices well. In a saucepan, mix them with the ginger, the sugar, the cream and (most of) the milk. Bring to a boil, take off from the heat and leave to infuse for at least about 10 minutes (you will find all the details and measurements set out in the recipe-box below, by the way).

Blend the starch with the remaining milk in a separate bowl and set aside. Put the now infused mixture back on the stove and bring to a boil, then add the starch-milk. While whisking, keep the blend close to a low boil for at least 4 minutes, until the ice cream base has thickened and any traces of starch (visible or flavour-like) have disappeared – in no case, this should take more than maximum 10 minutes. Take off from the heat and let cool down. 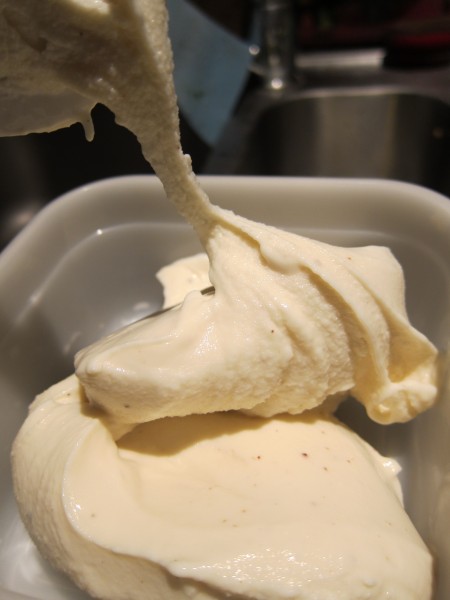 When sufficiently cooled down, chill the ice cream base in the fridge. Pass the base through a sieve and discard the pieces of ginger and the spices. Churn in your ice cream machine. Serve directly, or store in a freezer-safe container with lid in your freezer (remember to cover the surface of the ice cream with plastic film before putting on the lid – your ice cream will keep much better that way!).

You can also make this ice cream without an ice cream machine. If so, simply still-freeze your ice cream base. For this, you will only need a freezer and a fork!

Find a (preferably rather flat) freezer container, pour in the chilled-down ice cream base and put in the freezer. Take out after about 45 minutes, whisk the base with a fork (after just one hour, most of the base is probably still quite liquid …) and return to the freezer. Wait yet another 30-45 minutes and repeat. Then repeat about two more times. As the ice cream base becomes more and more creamy and frozen, you will have to whisk more and more thoroughly.  Don’t skimp on this manual churning, as it is your best way to ensure a nice, creamy final consistency and avoid unwanted, unappetising ‘iciness’. 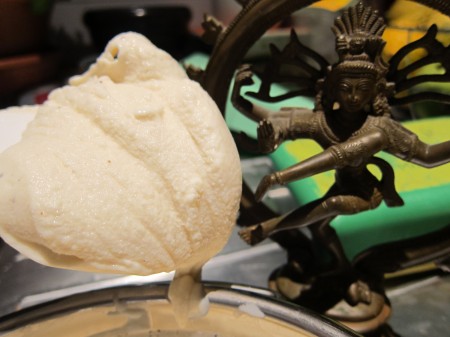 The final ice cream – a real treat for any lover of aromatic spices!

Yes, it is clear that Masala chai can be enjoyed also in frozen form.  And the delicious flavour aside, I would also like to underline that both the consistency and the texture of this ice cream turned out great too – again proving how versatile and trustworthy starch-based ice cream bases really are.

While I personally love aromatic, spicy ice creams like this, the flavour might tend to be somewhat more appealing to ‘adult’ tastes.  Children might turn out to prefer other, less exotic flavours. So if you are catering to all age-groups, you might want to consider preparing some more “child-friendly” alternatives on the side (like some trusty strawberry ice cream for instance). Good luck!

Print
Masala Chai ice cream
Ingredients
Instructions
Notes
If you would like to also test adding some actual tea to the flavours, black tea would probably be the most "authentic". I would suggest that you infuse the tea (well contained in tea infuser or teabag) at the end of step 2 above. After letting the tea infuse for about ten minutes, remove and discard it - you don't want to infuse so long that all the bitter tannin is released!
Wordpress Recipe Plugin by EasyRecipe
2.2.6
Share