Pistachio is supposed to have been one of the nice, edible things growing in the Hanging Gardens of Babylon. These Gardens were one of the ancient “Wonders of the World”, so perhaps there is no wonder that pistachio remains one of the most classic of gelato-flavours. In this post, these quasi-nuts will team up with another quasi-nut also known to mankind since time immemorial – the almond. 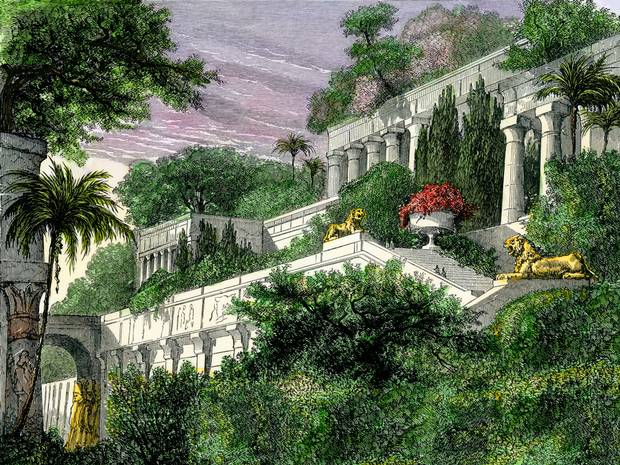 The Hanging Gardens of Babylon … recent research indicate that they really were built, but actually not in Babylon but in the Assyrian capital Nineveh!

The cultivation of both almonds and pistachios dates back very, very far in human history. Botanically speaking, none of these nuts are actually “nuts” but drupes (stone fruits). And with regard to ice creams, both flavours count as real classics. While I have posted recipes for almond ice cream before, there is slightly more to consider when preparing pistachio ice cream. Mainly with regard to the colour.

So, what about the colour?

Genuine pistachio ice cream, made with real pistachios rather than flavouring and/or food colouring, should ideally be mildly, mutedly natural green. This is actually one of the ways to assess whether a gelateria is a good and genuine one – if the pistachio is “too green”, it is probably fake: stay clear of the place!

But while commercial neon-colours should be avoided, the home-maker is usually faced with the opposite problem: the pistachio ice cream simply does not come across as very green at all. One reason might be the preparation: roasting the pistachio nuts will, for example, reduce the green colouring. But this is a bit of a trade-off, since roasting nuts typically brings out more of their flavour. So if you roast the nuts, just don’t be too surprised if your final ice cream does not turn out to be so very green (the taste, however, will still be great).

Obviously, the matter of colour also depends on how the pistachio is incorporated into the ice cream. Those interested in green results should probably avoid roasting the nuts, grind them and let them soak for a while in the ice cream base before sieving them off.  But you know me – I love when ice cream contains some fibres, and rarely see reasons to sieve off anything edible from my ice cream bases 😉 .

This recipe treats the pistachios and the almonds almost as mix-ins. A ground, paste-like mixture of them will be added to the base only towards the very end of the process. And I roast them too, by the way. While the result will be delicious, it will unfortunately not be very green.

The recipe is adapted from Fernanda Gosetti’s “Il Gelato”, a gem of a book which I have written about before. In short summary, the gelato follows the lines of typically Italian custards (= high proportion of milk, small proportion of cream, quite a few egg yolks and a bit more sugar than usual). 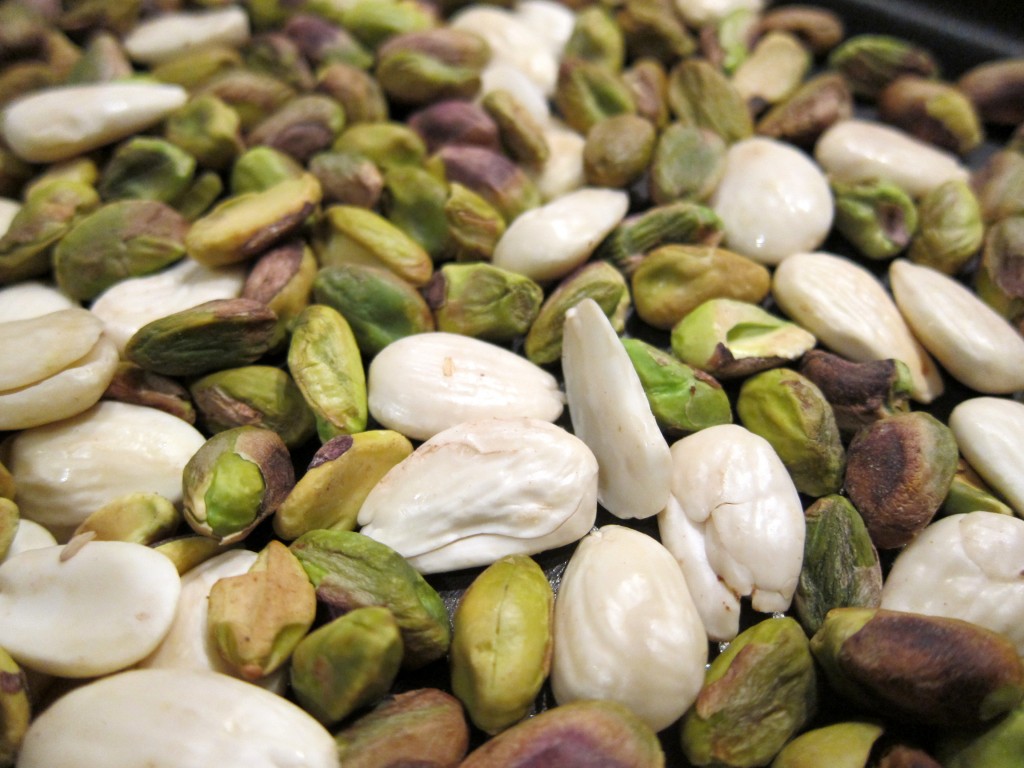 Roasted and ready! Using almonds without blanching them could probably well be tested too, as well as playing around with different proportions of pistachios to almonds.

Following further in Gosetti’s footsteps, the pistachio nuts are mixed with a smaller amount of blanched almonds. Both the pistachios and the almonds are roasted for a fuller flavour (sorry, there goes most of the green colour …), and then ground.

Finally, some Cointreau  (a French orange-flavoured liqueur, of the Triple sec-type) is added to the ground nuts. Note that this alcohol does not really make the final ice cream appear “alcohol-loaded” but still adds to the flavour in a subtle, refined way that really can be recommended.

However, if you do not want to add any alcohol, feel free to exclude it (if so, I would recommend that you replace the Cointreau with a simple sugar syrup and perhaps even an extra tablespoon of inverted sugar; all in order to form a paste-like mixture but also to make the final ice cream more scopeable; the latter otherwise an added side-effect of the alcohol)! 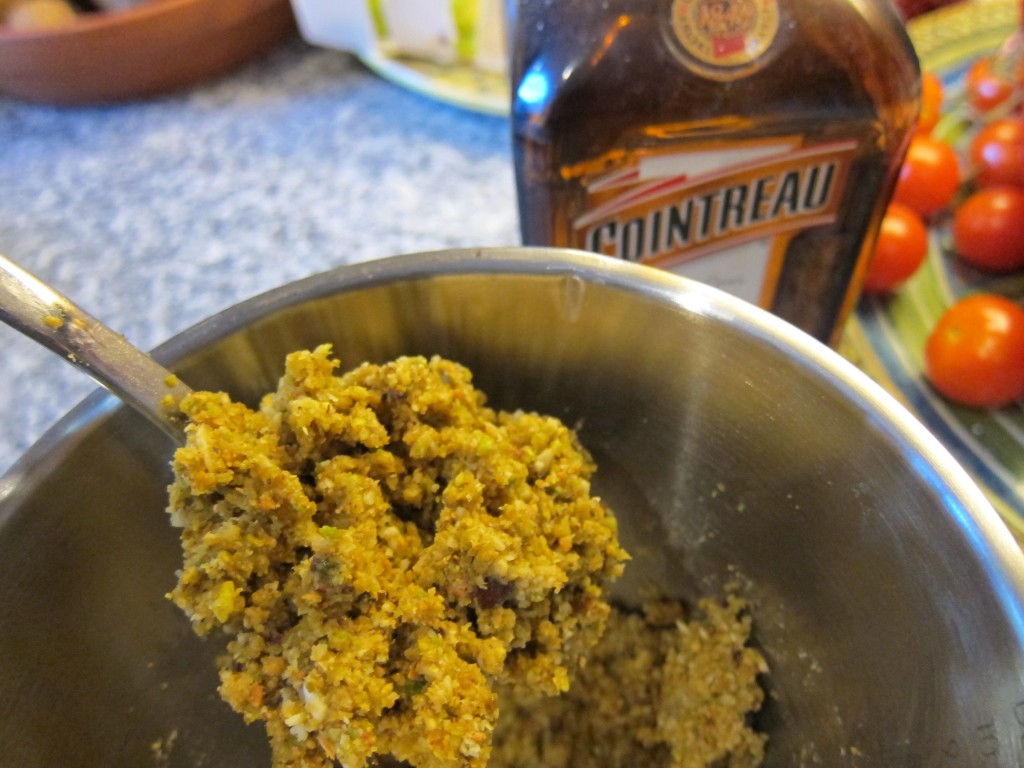 Mmm … A little Cointreau goes a long way when it comes to silverlining the pistachio/almond mixture (and bringing it together).

With the pistachios, the almonds and the Cointreau well mixed and duly prepared, the mixture can be put away for now (preferably in some cold place, like the refrigerator).

The custard base is prepared in the typical way: Start by whisking the egg yolks together with the sugar [the traditional way]. Or, if you are leaning towards the more modern reformist-ways, just put all the custard-ingredients together in the sauce pan, whisk well and bring the base up to the nappe-stage [thus ensuring pasteurisation in the range of about 82-84º Celsius (180-183 ºF]. Go to this post for more detailed instructions (or check this post’s recipe below).

Once the custard base is ready, cool it down as quickly as you can. Then, put it in the refrigerator to chill for at least a few hours and preferably over night. Then, churn the base in your ice cream machine according to instructions – or still-freeze the base by using your freezer only (following the advise given on still-freezing in this post). 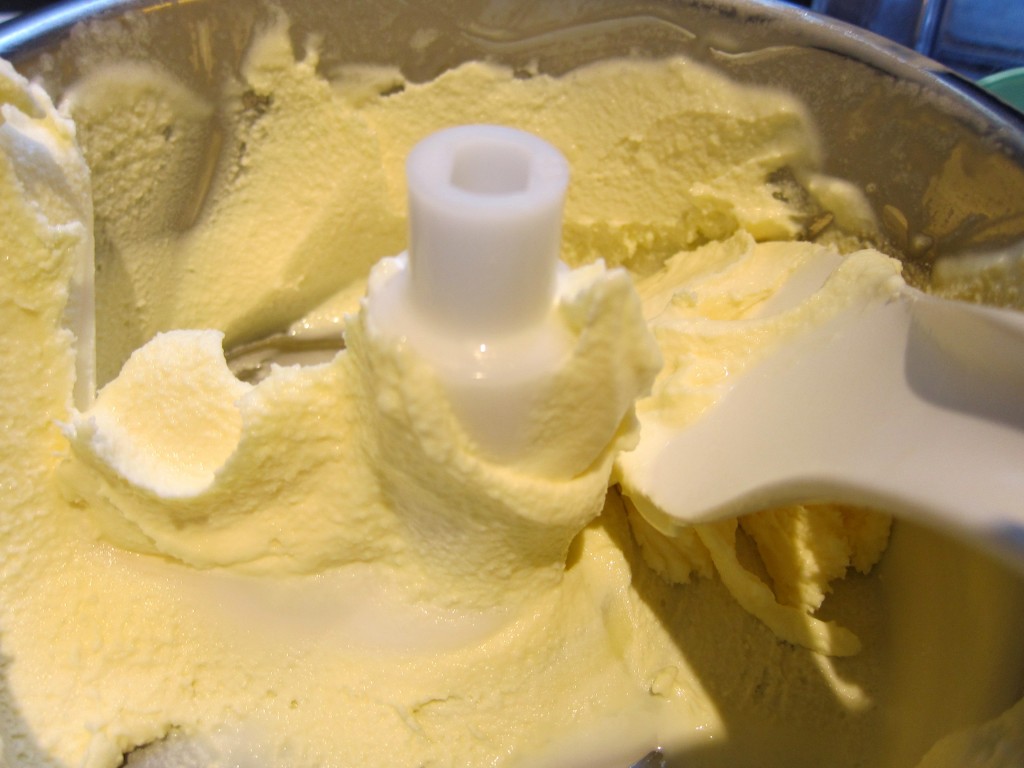 The ground almond/pistachio-mixture could then finally be added – little by little – towards the very end of the churning (if added too early, the particles will likely just “sink” to the bottom of your ice cream).

However, the least messy approach – which I recommend – would likely be to finish the churning just a little bit earlier than you normally would, pour the ice cream base into the intended freezer-safe container and mix it with the nut-mixture there. 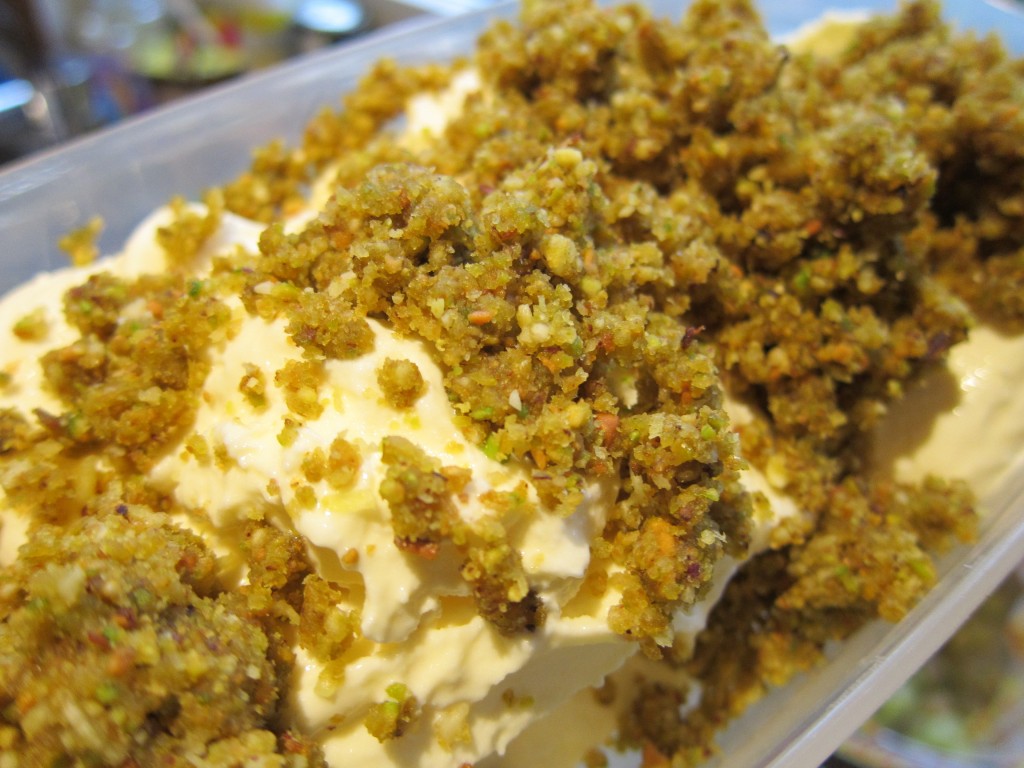 Maybe the easiest way to ensure that the pistachio/almond mixture is well dispersed: do it as the very last thing before putting the gelato into the freezer.

In both cases, once you have put the ice cream in a freezer-safe container, cover it with plastic film and lid and store in the freezer. Note that this “freezing before serving” can be recommended even to those who normally enjoy their ice creams fresh and straight from the churning: since the nut-mixture is added so late, it should ideally be allowed at least an hour or two to integrate well into the rest of the ice cream. 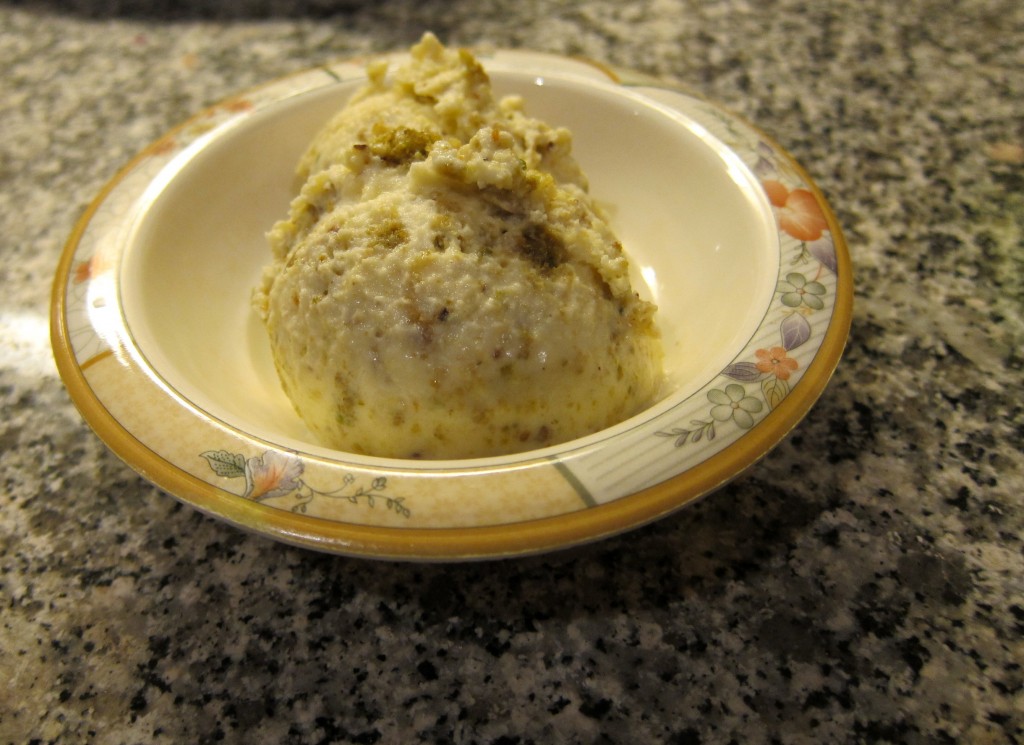 While not particularly green, this tasty gelato is not only visually pleasing but also comes packed with delicious flavours and offers a very gratifying mouthfeel. The paste-like mixture of ground pistachios and almonds, with its flavour-enhancing silverlining of Cointreau, is soft yet gives a nice, chewy resistance. As mentioned, the gelato becomes even tastier after a few hours in the freezer, when the mixed-in pistachio/almonds have “merged” better with the surroundings. Mixing pistachios and almonds should produce a quite harmonious flavour, but using too much almonds can shift the balance and turn the gelato into a predominantly almond gelato. Just in case, dedicated pistachio-lovers might do well to reduce the almond-proportion in the recipe even further (say, to 125 gram pistachio nuts/25 gram almonds.  And while that would change the overall character of the ice cream, those who really dislike almonds could of course use pistachio nuts only).

Print
Pistachio almond gelato
By: Anders@icecreamnation.org
Adapted after a recipe in Fernanda Gosetti's "Il Gelato", this combination of ground pistaschio nuts and roasted almonds, silver-lined with a touch of orange-flavoured Cointreau and meshed into a nice Italian gelato-base is absolutely delicious.
Ingredients
Instructions
Rost the nuts first
Prepare the custard base
Mix in the pistachio nuts/almonds
Notes
Those who would like to avoid a too almondy final flavour should consider changing the proportions (to, say, 125 gram pistachio nuts/25 gram almonds). Or, if you are no friend of almonds at all, just use pistachio nuts throughout (which would change the overall flavour of the ice cream, but still should be pleasing to pistachio lovers).
Wordpress Recipe Plugin by EasyRecipe
3.5.3251
Share