Bananas must be among the most beloved of all fruits (to be botanically correct, it is actually a berry!). For ice cream lovers, the attraction is obvious – good, genuine banana ice cream is delicious!

Our ice cream will – of course – also be based on genuine bananas. But to make things more interesting,  we will try a recipe where we actually (only) will use the unique flavour of the bananas. The key to this will be infusion! Yeah, I know – it is fascinating stuff … and the result is fantastic! 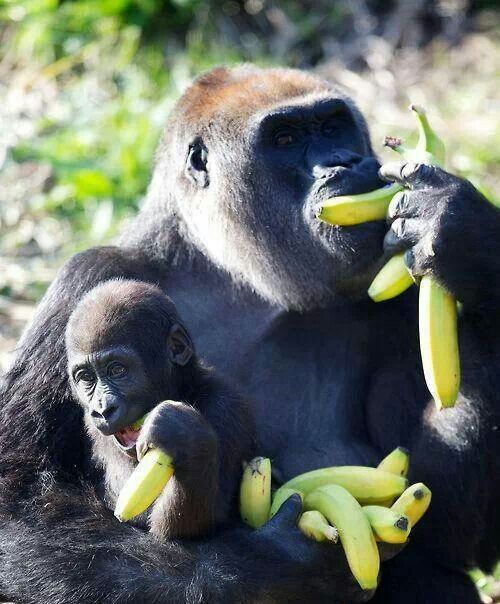 Bananas – popular among both young and old!

The history of bananas dates back to ancient eras. In more modern times, bananas have even had geo-political consequences, particularly in the Americas. Originating in New Guinea,  the banana spread with Austronesian traders over the Indo-Pacific already in ancient times. From thereon, the banana continued to other parts of tropical Asia. Later on, one main drivers behind their eventual spread over the globe would be the early expansion of Islam: Together with Islam, the banana was brought to Palestine, Egypt, and onwards to the rest of North Africa, to (the Christian) Cyprus and to the then-Muslim Iberia.  The next big expansion took place in the 15th and 16th centuries, when the Portuguese started up banana plantations in the Caribbean, and in the South and Central America. In most of Europe, bananas continued to be quite rare throughout the Victorian era.

By the 1880’s, the banana had become quite well-spread in North America. With the continued developments in modern transportation and refrigeration, the scene was set for more global operations and the rise of multi-national giant corporations, and brands like today’s Chiquita and Dole.

The term “Banana republic” was coined already in 1901, reflecting the immense and corrosive influence of the Banana companies over both the economic and political life in several of the banana-growing countries.

Bananas and ice cream go very well together. Did you know, for example, that the banana is about the only fruit that does not need any additional sweetening  (beyond what the base itself requires) to function in ice creams? No big surprise then that bananas often form the basis in many vegan ice creams (“nicecreams”).  In most recipes, the bananas are usually mashed and added to the base. But we will try another way – infusion! 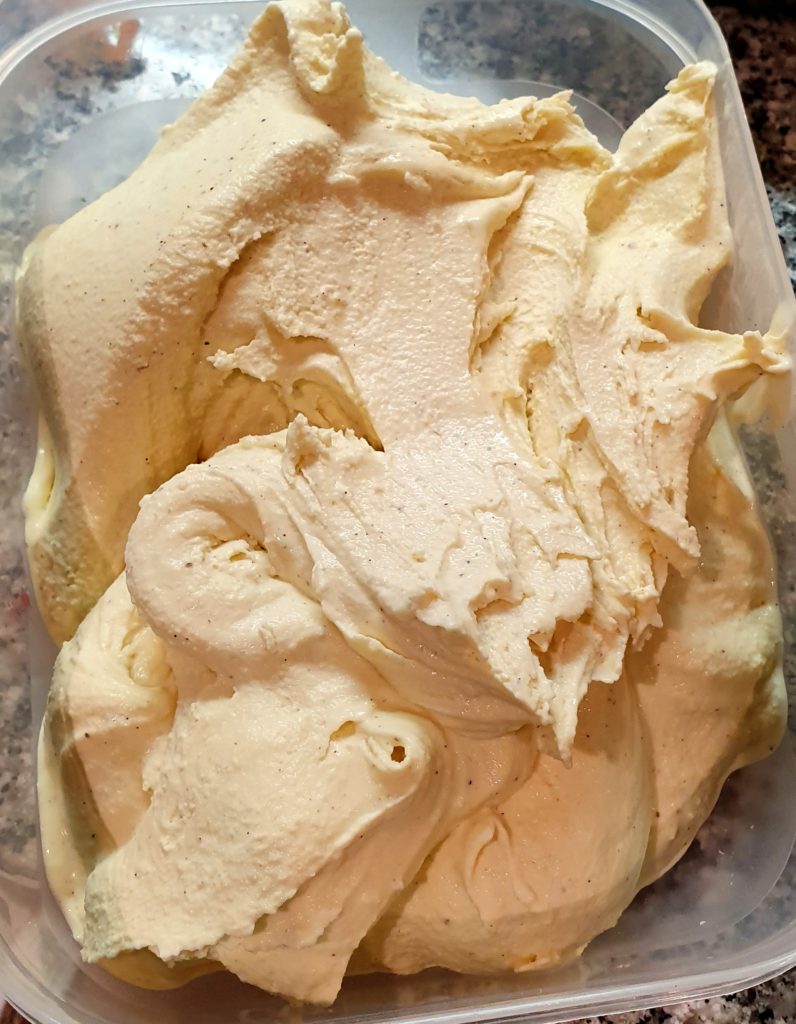 The idea and basic recipe comes from the unparalleled Stella Park (a k a BraveTart). Her core idea is to boil and steep the bananas in milk over night (or longer: Park recommends at least 24 hours): the flavour will release and transfer to the milk, giving us “true banana” … without the actual bananas, so to say. Could this really work? Intrigued, I decided to give it a try!

To maximise the flavour, the ideal bananas should be over-ripe: about the time when others want to throw them away, they should be perfect for your ice cream! 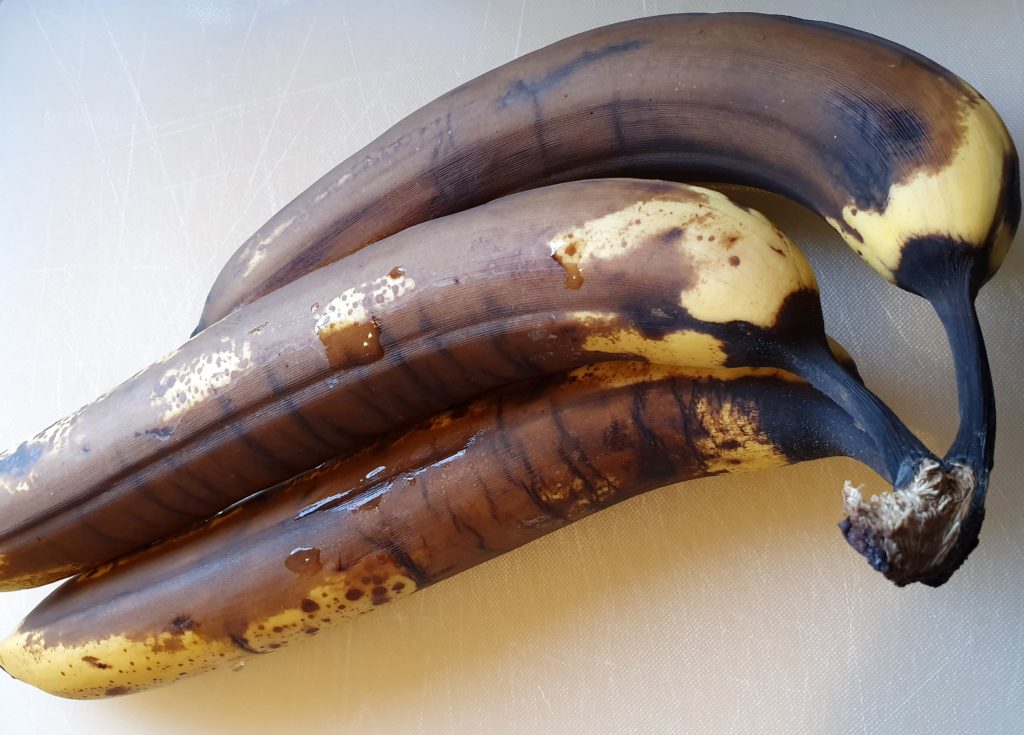 Urrrk … ready for the garbage bin, right? No, not at all – ready for ice cream!! 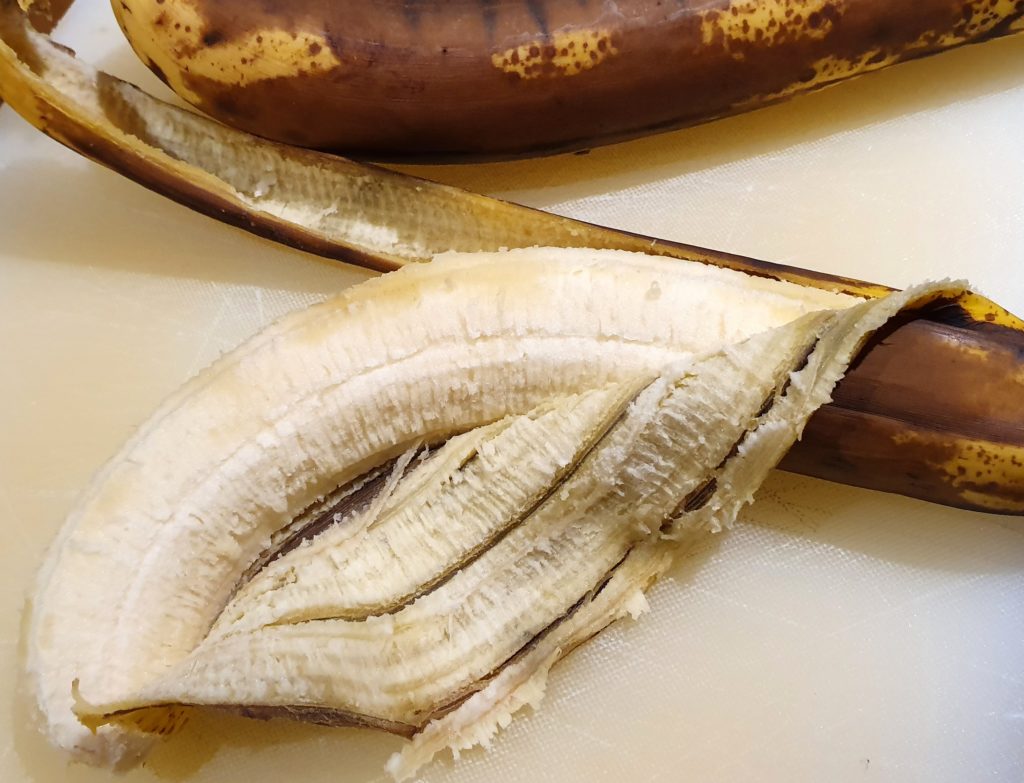 Never judge a banana by its cover: beneath the peel, this overly ripe banana still looks alright!

Slice the bananas, put them in a sauce pan together with the dairy and the vanilla. Stir every now and then, until the mixture begins to simmer. Then, take off from the heat and let cool down. When cool enough, pour the banana-dairy mixture in a suitable container, cover and refrigerate at least over night and – following Stella Park’s instructions – for 24 hours or even longer. 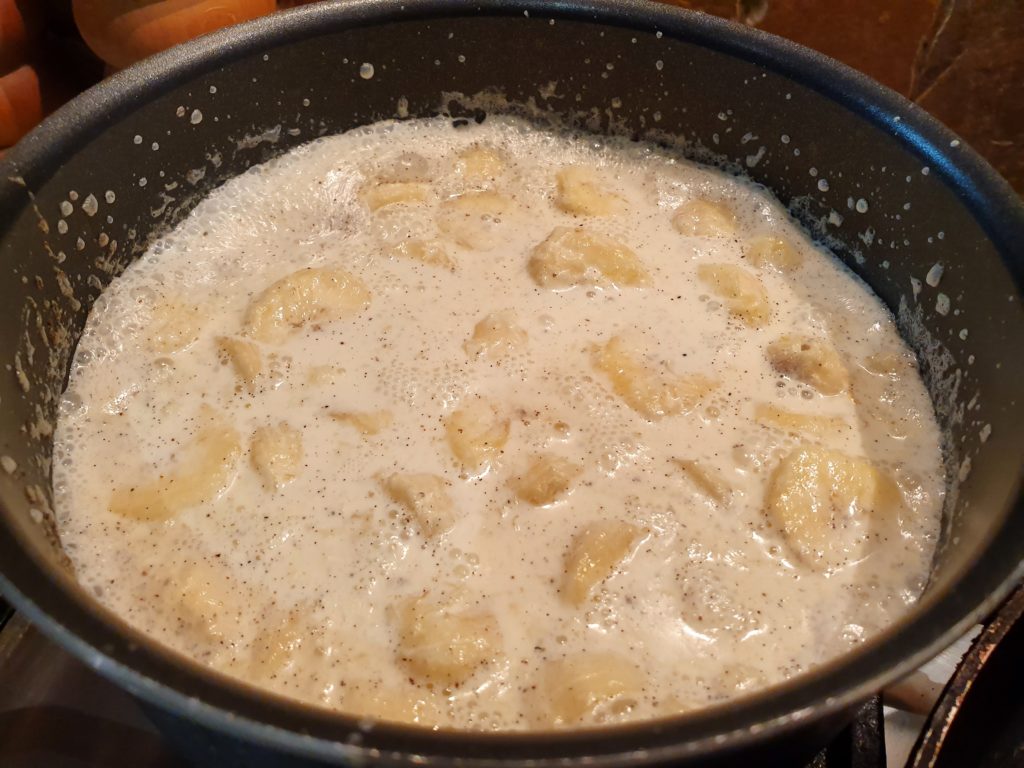 The banana – sliced, and simmering with the vanilla in the  dairy. The infusion experiment has begun!

About 24 hours later (or however long you keep the infusion going), it is time to separate the banana pieces from the dairy: their flavour now basically transferred to the dairy mix. 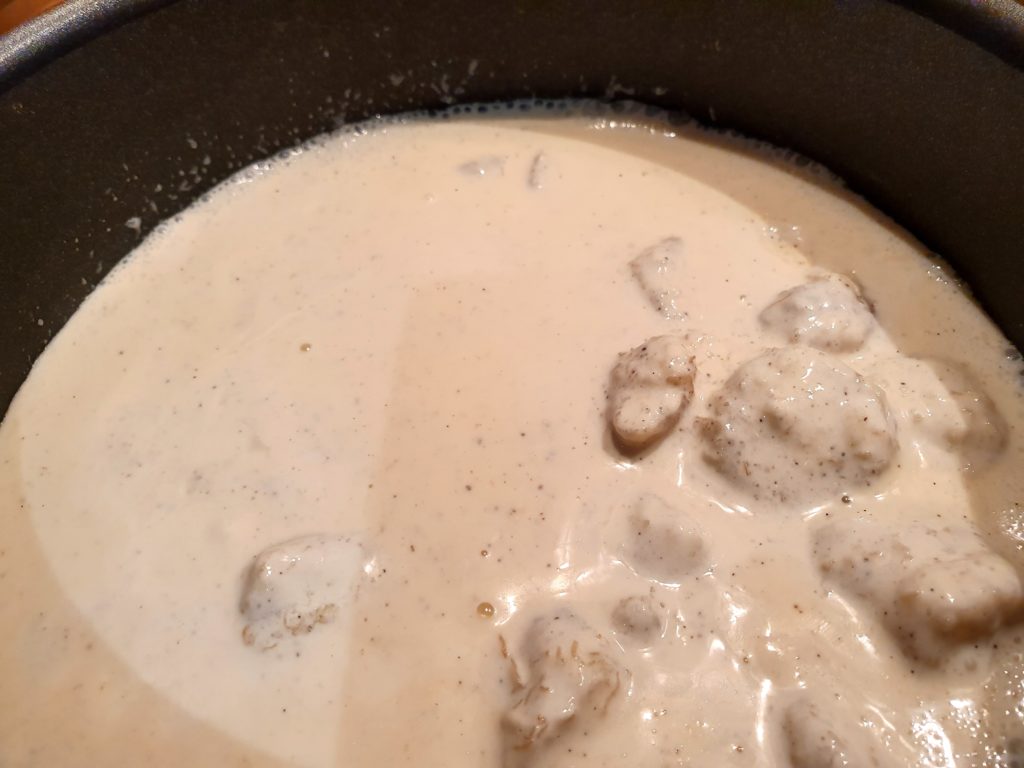 After over 24 hours infusion, the banana pieces have paled quite a lot. They have now served their purpose!

I used a spatula and a simple sieve for the next step: Gently push to ensure the bananas give off whatever dairy they still contain. 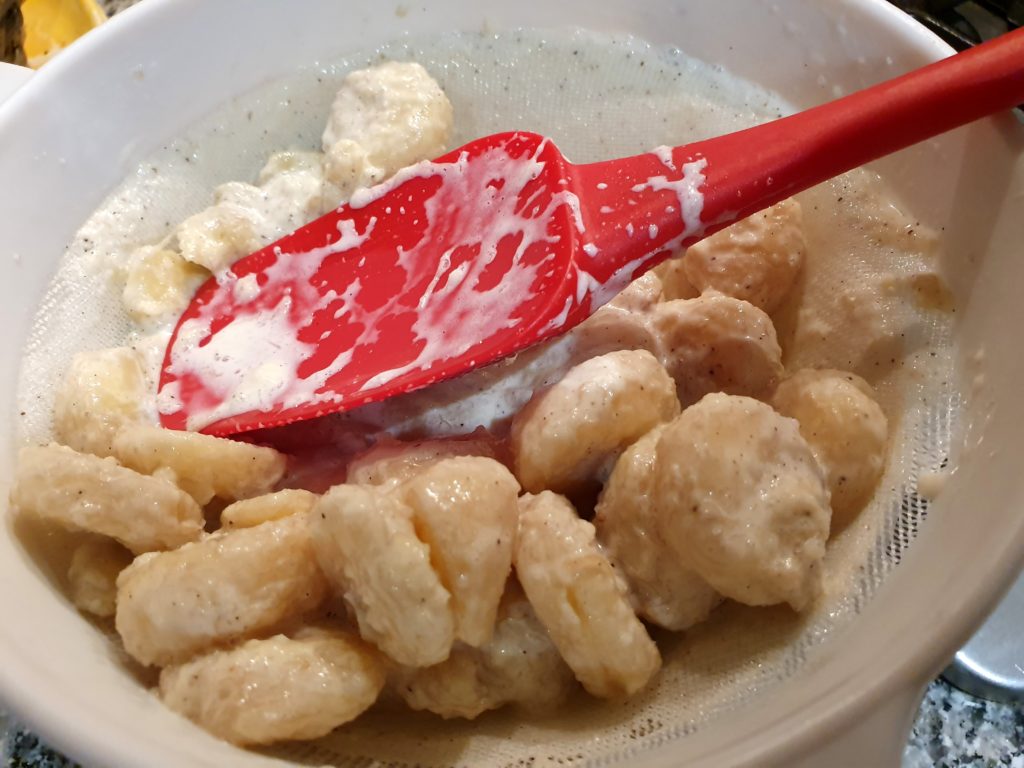 We want to extract as much of the milk as possible from the banana pieces before we discard them: push persistently until you feel that they have given you all they can! 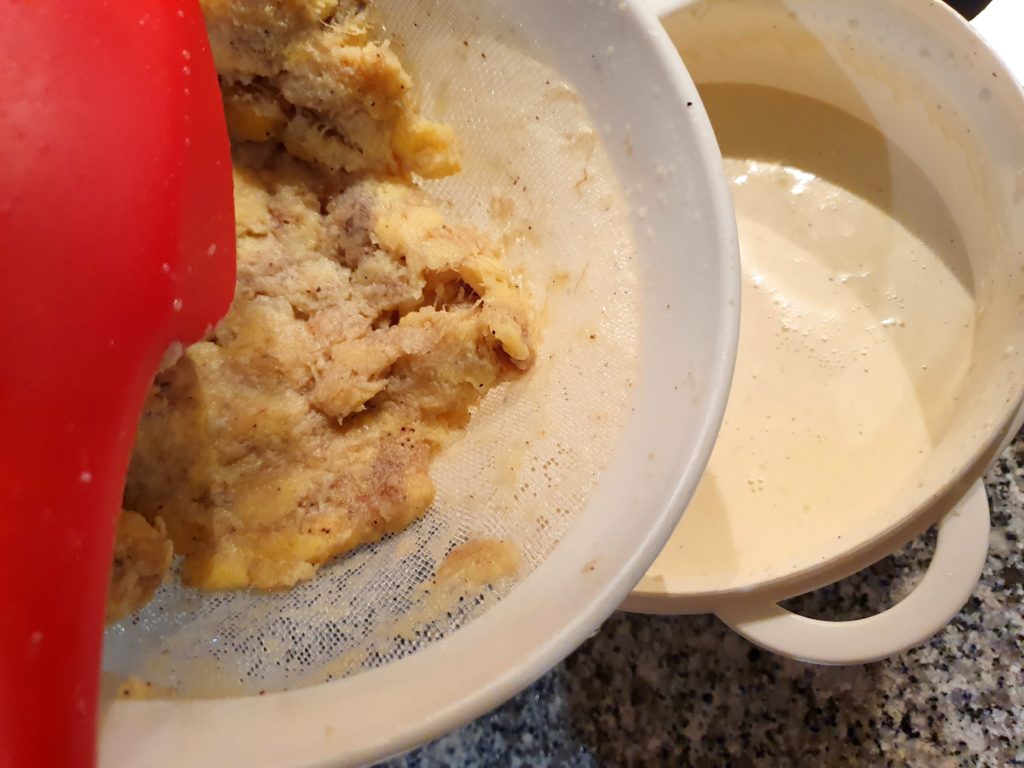 The last step … creating a custard base

Stella used the traditional custard making procedure, but I went with the more direct Modernista approach: simply mix your strained banana-flavoured dairy with the egg yolks and the sugar(s) in a sauce pan, then heat it all in one go.

As with all custard bases, stir with a wooden spoon or a spatula and bring the base up to (no more than) 85 degrees Celsius/185 º F: the so-called Nappe stage, and also the recommended temperature to bring about pasteurisation. 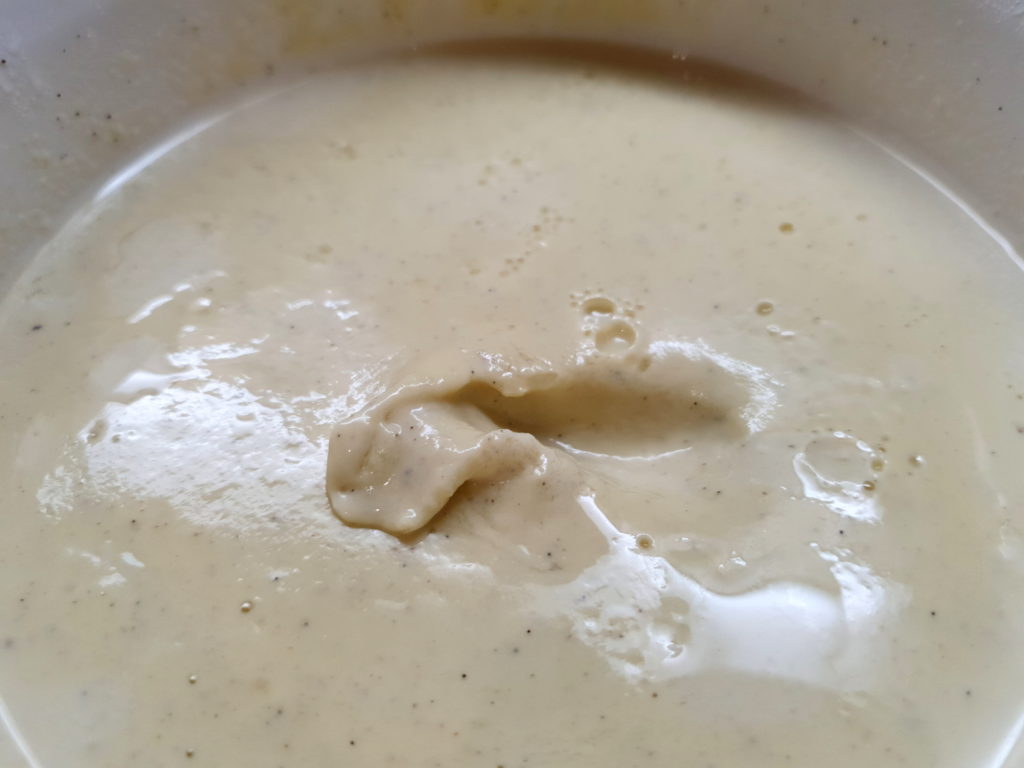 When the (now custard) ice cream base is ready, let it cool down and preferably chill in the refrigerator a few hours before churning it in your ice cream machine.

If you have no ice cream machine, take a look at this post for some ideas on how to make it anyway with your ordinary home freezer. 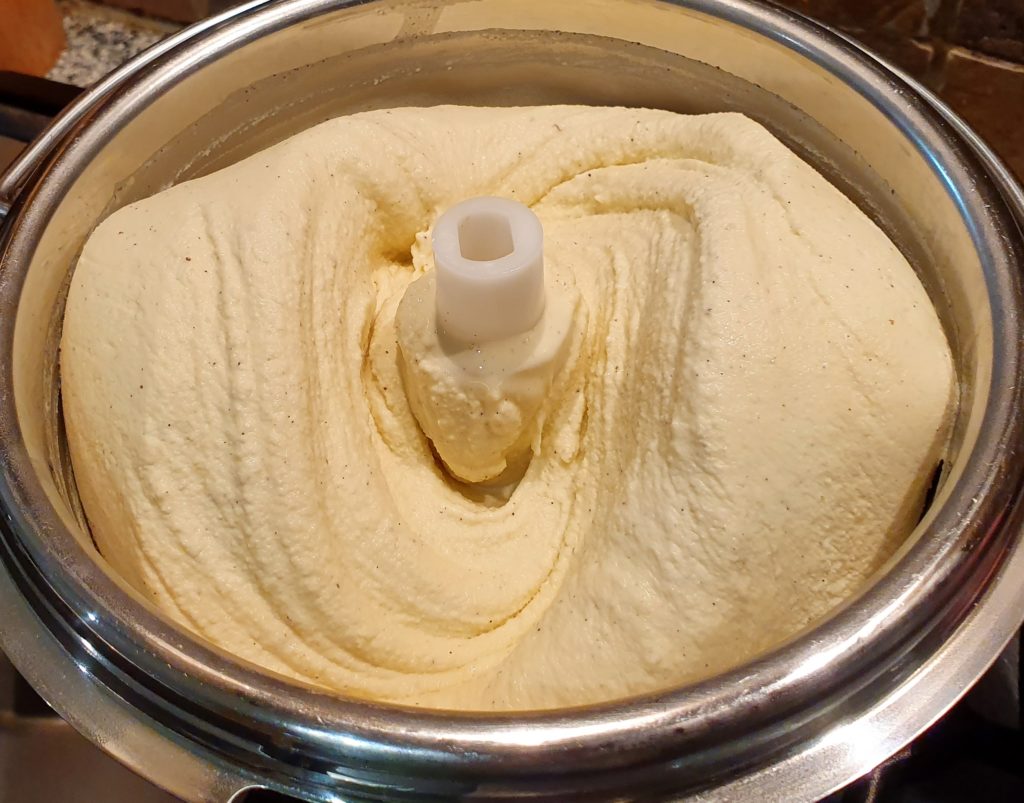 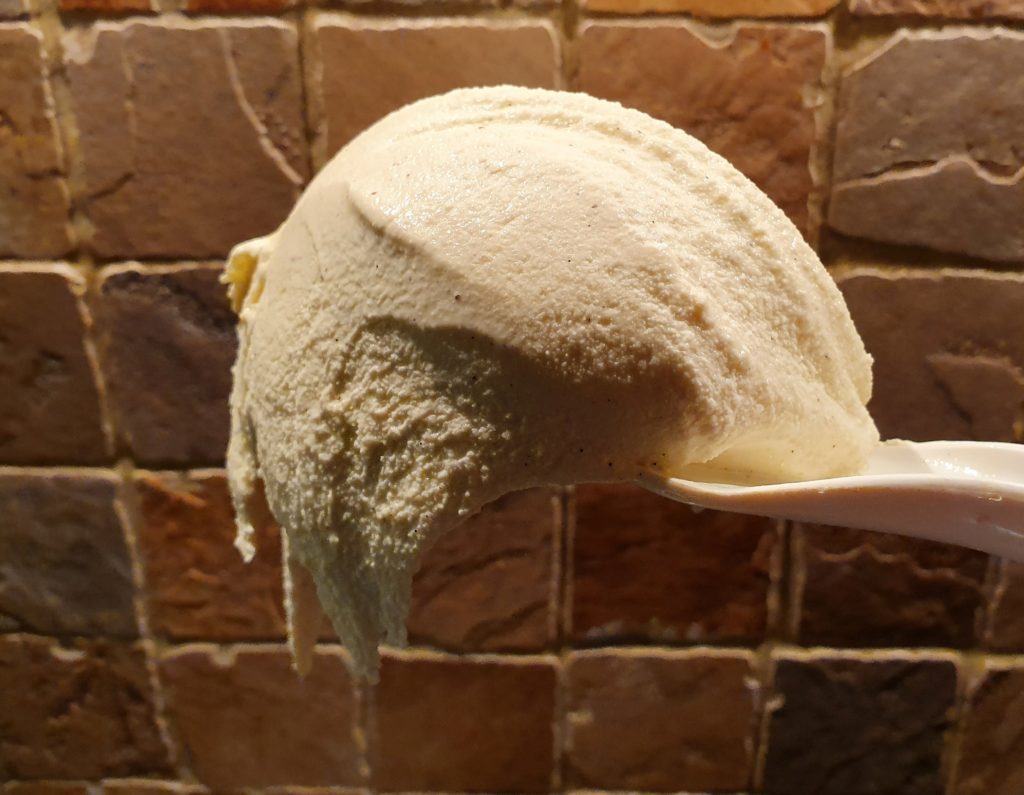 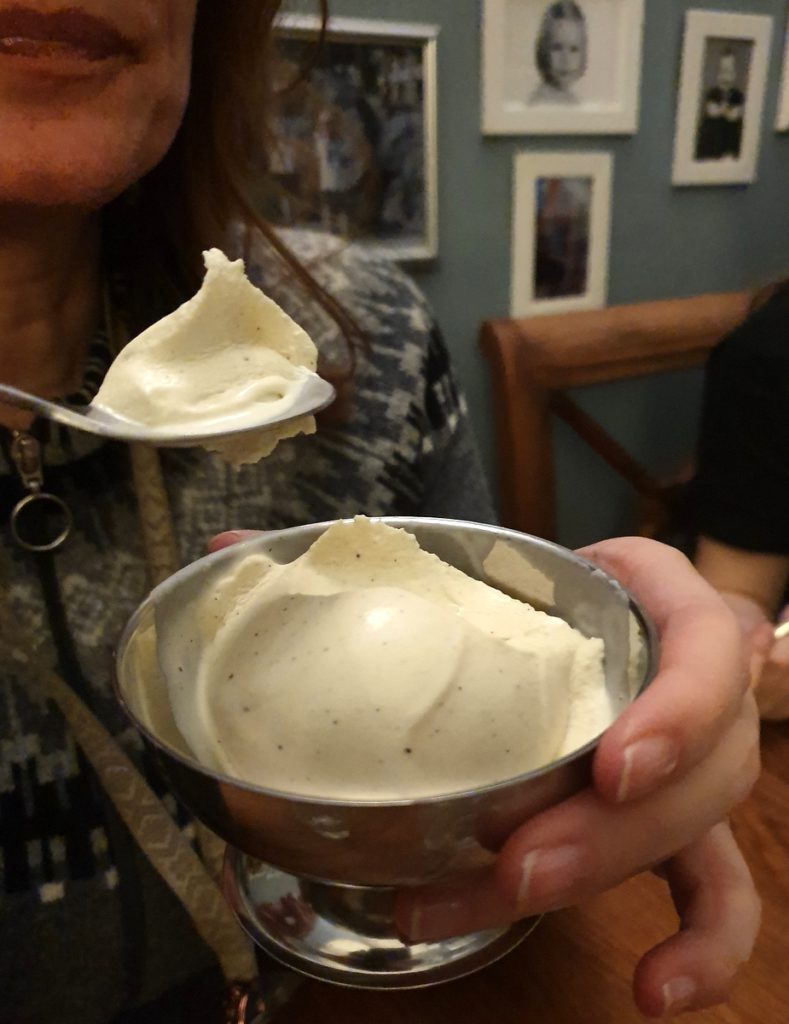 Mmm … all testers agreed that the Banana ice cream was a winner!

Stella Park called her recipe Crazy Banana, and the infusion method really delivers on the flavour! In fact, this ice cream tastes more of banana than most other banana ice cream that I have ever come across. It really baffles the mind that the ice cream only contains the flavour, but not the actual bananas themselves. The infused flavour is well and truly genuinely banana, and the method seems to have concentrated and reinforced what still feels totally natural! Neither me, nor the delighted testers could hardly believe it 🙂 .  The ice cream is simply great, and not only flavour-wise. The consistency is also excellent – smooth, delicious and scoopable.

Indeed – if you plan on testing only one banana ice cream this decade, this should be the one! 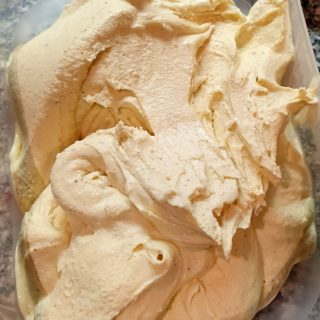 Anders@icecreamnation.org (after Stella Park)
A recipe by the incontournable Stella "Bravetart" Park is the basis for this creation, where a dash of cinnamon optionally might provide a pleasant contrast to the rather intense banana flavour!
Print Recipe Pin Recipe 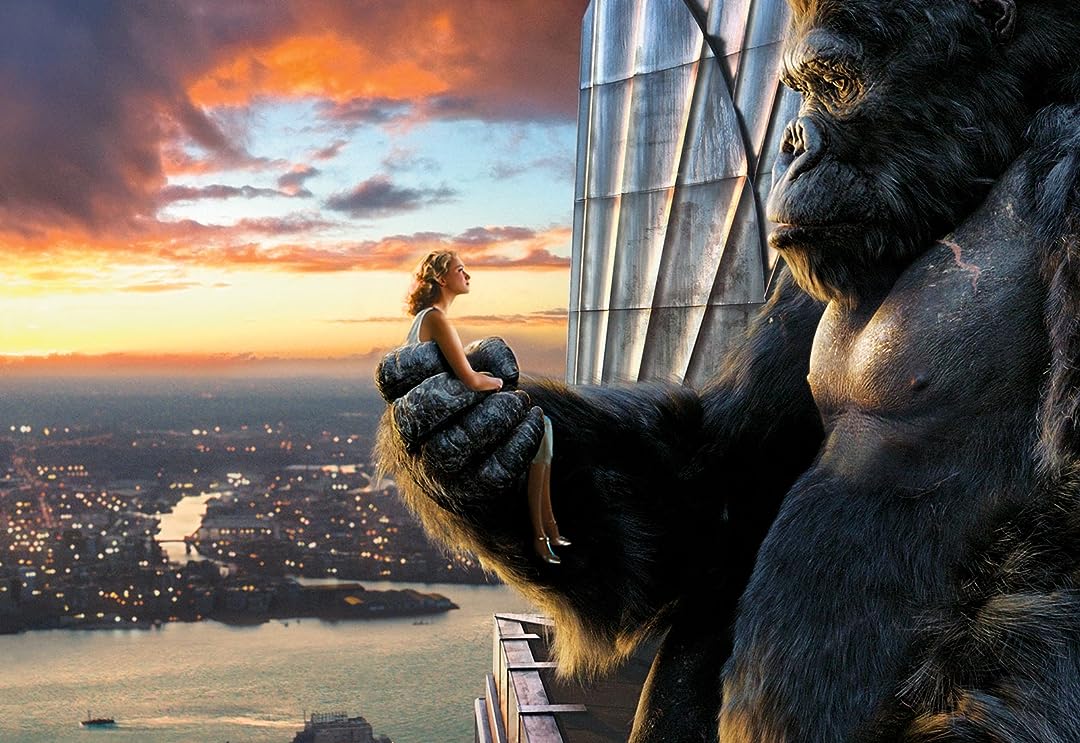 – OK, the scenery is fantastic, but where is the Banana ice cream you promised to bring?