King Kong – eater of Banana Caramel ice cream! Implausible? Yes, but not more than Kong himself.

I once read (in National Geographic) that Skull Island – King Kong’s native island home – never would work, scientifically speaking: There is simply no plausibility in a small and isolated ecological system (the Island), filled to the brim with large, over-grown predators. While these findings did not come as a surprise to me (and probably not to anyone else either), King Kong continues to fascinate me … a fascination which began when I first watched the 1933 black-and-white masterpiece on TV as a young boy.

So, back to Skull Island. As the place clearly is implausible in most senses, we might as well play around with the possibility that the natives knew how to make caramelised milk. After all, this is hardly asking for more than what is required for believing in the existence of Kong himself;-)

And if the natives had caramelised milk, Kong would probably have received some as offerings. And as we are talking about a giant ape, the caramelised milk would eventually have been mixed with all monkeys’ signature delight – bananas.

Inspired by my fantasies about King Kong, and by a recipe from Pippa Cuthbert’s and Lindsay Cameron Wilson’s very nice book “Ice Cream!“, I set out to prepare a blend of wild bananas and sweet caramel – in frozen form, of course. 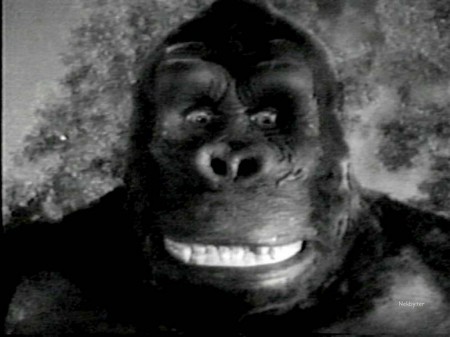 As most ice cream-makers know, the best bananas for the job are those with skins filled with black spots, and on the verge of being almost over-ripe. Such bananas will have the most flavour, which is extra important since the cold in ice cream generally dampens the strengths of flavours. 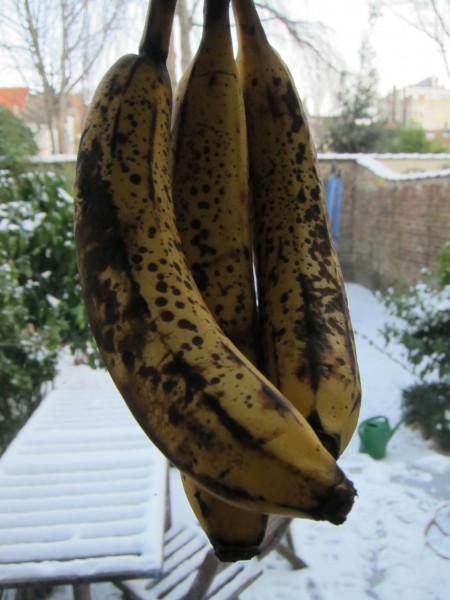 Using a fork, I mashed the bananas to purée. Adding lemon juice to the purée helps to counter any discolouring of the mashed bananas (as you know, they tend to blacken otherwise), and also  adds an important freshness that helps to balance the sweetness in the overall palette of flavours.

Turning now to the caramel, I decided to test a trick that many of you probably know about: I simply took a can of sweetened condensed milk and boiled it – for two hours!

In other words, I created some Dulce de leche. 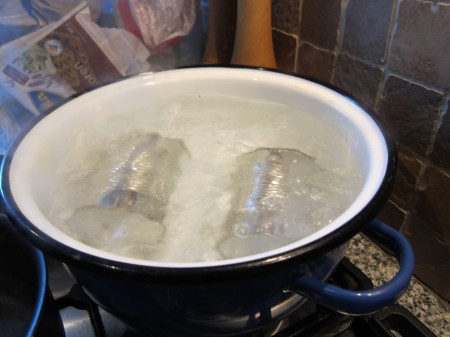 Obviously, the cans need to cool down after being kept boiling for so long. 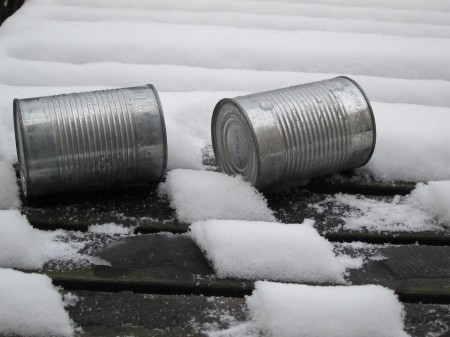 But once they have cooled down, you can open them … and find that the milk has caramelised, leaving you with a thick, delicious caramel sauce! 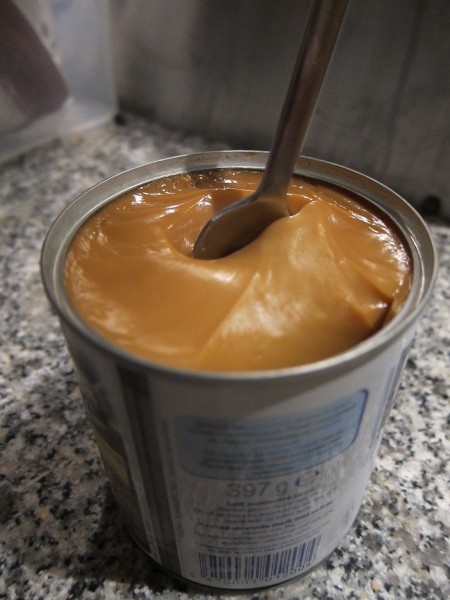 Boiling cans of sweetened condensed milk is obviously a very nice and rather fail-safe way of getting a caramel sauce based solely on sugar and milk. The cans are not supposed to explode either, as long as the water in the saucepan does not boil dry.

Obviously, I regularly kept checking in on my cans while they were boiling, adding more water to keep them submerged at all times. But let me also tell you about another method for boiling the cans, recommended by a real pro. Here, you boil the cans in a casserole with water in the oven for three and a half hour at 140º C (284º F), and there is practically no risk at all of the water boiling dry.

The man promoting the oven-based method for caramelising the milk is no other than Ian Dowding. Co-inventor of the world-renowned Banoffi pie, he is a real expert on the subject and has probably boiled more cans of milk in his days than you and I could ever imagine:-). Go check out what he has to say on the subject here.  Given the time it takes to do the boiling, also heed Ian’s splendid advice and make sure you boil more than one can when you are at it – next time you need caramelised condensed milk, you will thank yourself for your foresight!

All you need to do now is to whip the cream loosely together with the vanilla, then blend it all with yoghurt and the caramelised milk. The lemon juice and the yoghurt (or sour milk, if you prefer) will ensure the relative overall freshness of the ice cream. Only using cream and/or ordinary milk here would most likely create a “too dull and creamy” ice cream. 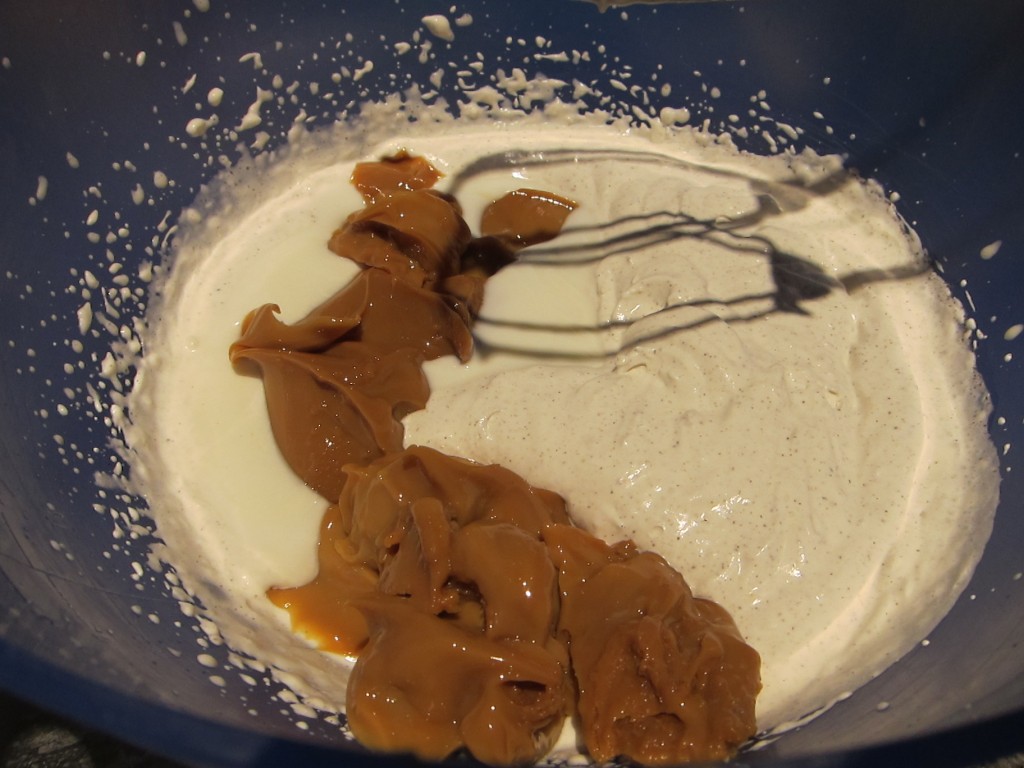 Apes or no apes, this ice cream is likely to be a smashing hit with most people. If your target group is adults, however, you can easily make the ice cream even more attractive – just add 1-2 teaspoons of instant coffee/grounded coffee to the ice cream base!

This amount may seem very small, but will still add a distinctly grown-up touch to the overall flavour. Being very pleasantly surprised myself about the powerful transformative effect of the coffee on the ice cream, I recommend that you at least make a small batch and try it out!

King Kong and coffee? Well, let’s just imagine that the coffee beans were raided from the kitchen of Venture – surely, the hardy crew would have brought some with them on the voyage to Skull Island. 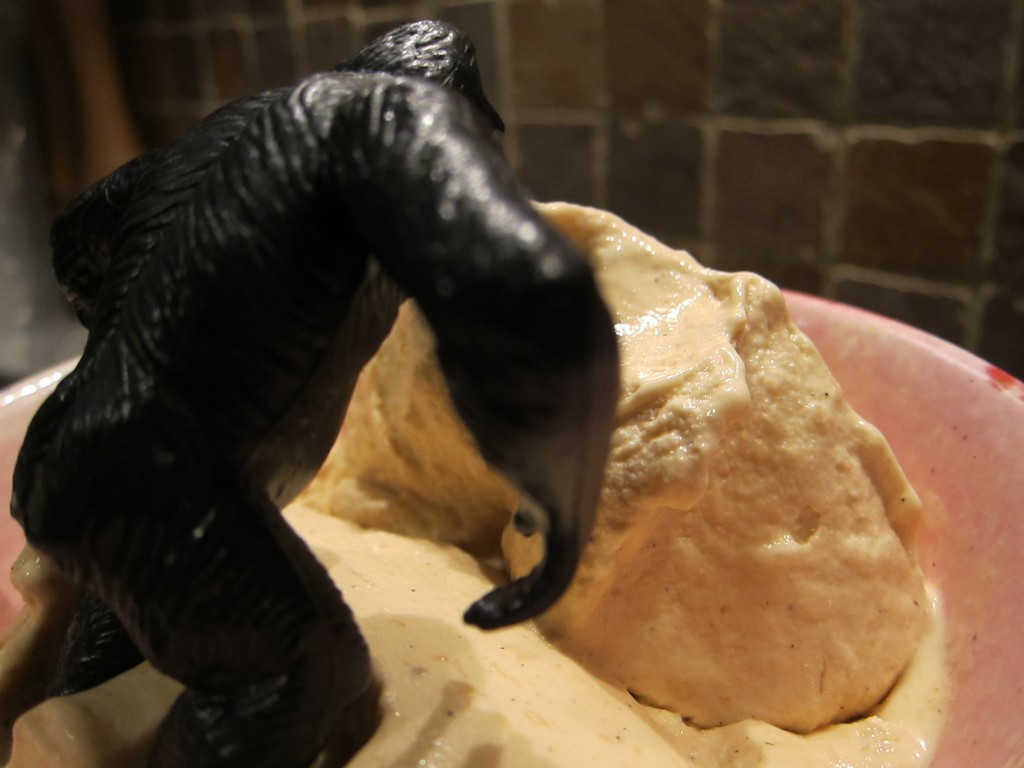 The final result – a mighty combination of bananas and caramel that would rank high on a list of King Kong’s favourite treats. You may think that an ice cream like this is bound to be just too sweet or heavy, but that is not the case: the sweetness, the cream and the yoghurt are all well balanced. To elevate the tasting experience to even higher levels of sophisticated enjoyment, grown-ups should not miss the opportunity to add some coffee to the recipe.

Clearly, this is a dessert capable of delighting both young and old primates, regardless of whether they live on Skull Island or not.

Print
King Kong Banana toffee ice cream
Philadelphia-style recipe with ripe bananas,caramelized sweetened condensed milk, yoghurt and - possibly - a grown-up touch of coffee.
Ingredients
Instructions
How to caramelize sweet condensed milk
Making the ice cream
Notes
Adding even just a little coffee to this recipe can have quite an impact on the flavour - the extra dimension is likely to be appreciated by grown-ups. Children, however, would probably prefer an ice cream without the added coffee. So, if you are curious and intend to serve both adults and children - why not make two (possibly smaller) batches and try both with, and without, coffee?
Wordpress Recipe Plugin by EasyRecipe
2.2.1
Share