Has your country got any national poet? Finland has Johan Ludvig Runeberg, who even inspired a national dessert! Why not celebrate by making an ice cream out of it? 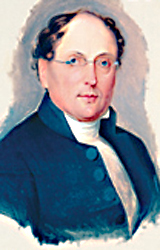 Johan Ludvid Runeberg (1804-1877) did not only write epic poems and the words to the Finnish National anthem (“Our land”) – he also gave name to a special pastry, still very popular in Finland.

Allegedly, the poet’s daily routine included enjoying a small almond torte, often prepared by his wife Fredrika. Although Fredrika probably had adapted an already existing recipe, the pastry quickly became known as the Runeberg torte (“Runebergstårta” in Swedish; the language used by Runeberg himself). 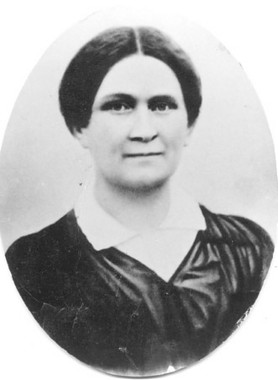 … and his loving wife!

The torte is a rather pretty little cylindrical almond pastry, often saturated with some rhum or equivalent, and traditionally decorated with a ring of icing filled with raspberry jam on the top.

Runeberg’s birthday is celebrated every 5th February, when apparently vast quantities of the torte are consumed in Finland.

Runeberg did create epic national poems, like The Tales of Ensign Stål (about the so-called Finnish war 1808-1809 when Sweden lost its whole eastern territory – i e  Finland – to Russia). But unlike many of his contemporaries, Runeberg’s poetry also focused on ordinary, often poor, people – rural farmers, soldiers of the rank and file and their likes. Since Runeberg’s poems praised these peoples’ down-to-earth, honest and hard-working qualities, it seemed fitting to go for simplicity and use the Runeberg torte as a main ice cream ingredient.

I was too curious about the Runeberg torte as such to deconstruct the recipe – instead I decided to first bake the tortes, try some “originals” and then simply add others to an ice cream base (Philadelphia-style, to remain simplistic).  And the tortes are really super-simple to make! (useful if you – blasphemous thought –  should grow tired of ice cream and just want a pastry).

Tortes to ice cream – from start to fin(n)ish!

So – first the Runeberg tortes! The recipe I followed uses a micro-oven, is super-simple and extremely fast, and comes from the Finnish Martha organisation for home economics (thanks to Gunilla for the translation of the recipe into Swedish, and for some interesting information – in Swedish – on the Runeberg torte itself).

The pastry dough mainly consists of ground almonds, a couple of eggs, sugar, butter, some bread crumbs, a little flour and some baking powder. To get the particular shape of the Runeberg torte, I put the dough in some smaller coffee cups, with destination the micro-wave oven.  This way, the total cooking time is reduced to five minutes! 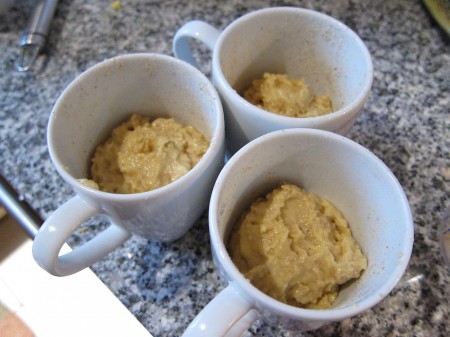 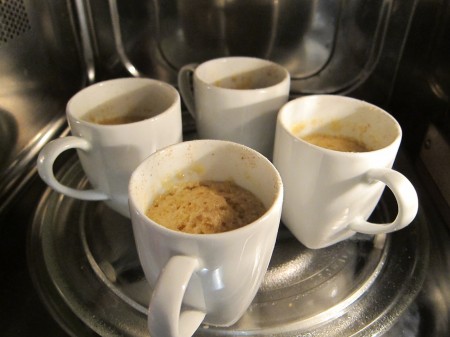 Since my tortes mainly were destined for inclusion in ice cream, I decided to ripple and add the raspberry jam separately. I also chose to omit the icing, given the already rather high amount of sugar. When the cute, cylindrical cakes (without toppings) had cooled down, I simply added a total of 2-3 tablespoons of rhum to moisten them.

Then, they were taken apart and crumbled into the ice cream base towards the end of the churning. 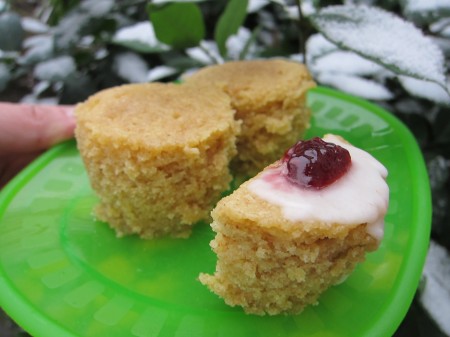 If you want to enjoy the tartes on their own, feel free to do so!

As for the ice cream base, I went with a robust and simple Philadelphia-style-version, with some yoghurt thown in for additional “freshness”:  All ingredients came  fresh and cold from the refrigerator, permitting for a quick preparation. 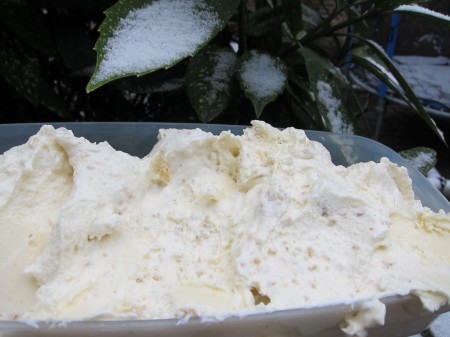 After the churning, I finally swirled in some raspberry jam and let it all freeze. As the cookie crumbles tend to saturate and soften even further in the relatively moist ice cream-environment, enjoying this ice cream after it has spent a night in the freezer might actually turn out to be an even tastier experience. 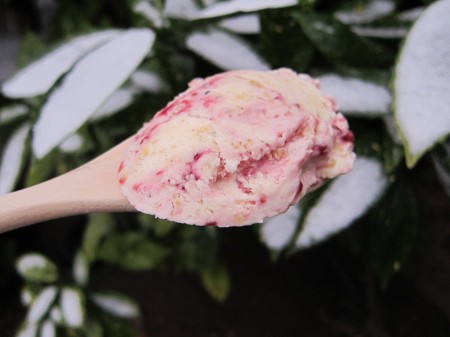 A scope of Runeberg tarte ice cream, ready to be enjoyed

Keeping true to the poetry of Runeberg, the final result was an honest, down-to-earth almond- and raspberry cookie ice cream. Leaving the ice cream aside, I can also confirm that the tortes themselves can defend their own place on the table (at least if you like almond and raspberry). Flattering enough, the dear children still considered the ice cream version to be tastier than just the tortes on their own.

Given how very easy it is to bake these tortes, I suggest that you make some and compare yourself:-)