Sometimes, too much of a good thing can be wonderful. But sometimes, it can just be too much.

This may be particularly true when speaking about acquired tastes, like those for goat cheese and for Cognac. And I’m speaking out of experience – my first attempt at this ice cream turned into an unbalanced abomination of goat cheese and unpleasantly large quantities of strong alcohol. The polite word that best described that batch was probably “overwhelming” … in a decidedly negative sense!

Yes, I should have known better but you know how it can be. Sometimes, you just get carried away in the kitchen, looking at ingredients that seem so tasty that adding more of them than planned surely only would make the dish even  better, right?  Anyway, here I learned a lesson about the value of  moderation (at least when it comes to certain ice cream ingredients;-), and the recipe came out greatly  improved.

As you probably know,  dairy (as in ‘normal’ milk/cream)  might sometimes be substituted for by other forms of dairy (as in cheese) when it comes to ice cream making. The following recipe is based on a combination of milk, cream and soft goat cheese.  And the prominent add-in? Figs saturated in French Cognac! 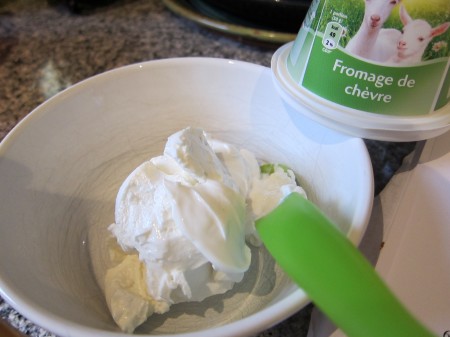 How much do you like the taste of goat cheese?

If you hate it, you should obviously better pass over this ice cream completely. But even if you do like goat cheese, you probably still want to end up with “ice cream” rather than “ice cheese cream”.

Naturally, if you add too much cheese to the base, ‘ice cheese cream’ is what you will get. If you are addicted to goat cheese, this might be a good thing, even something to strive for.  Being fond of goat cheese myself, I found out the hard way that too much of it in ice cream becomes too heavy and overbearing: Remember that it is easier to add some extra goat cheese if you want to strengthen the flavour later on in the process, than to reduce the flavour if you begin with too much cheese. 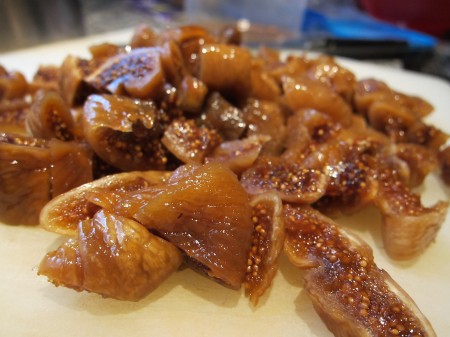 How much do you like the taste of Cognac in your ice cream?

The figs in the recipe are to be soaked in Cognac. Cognac is a classic  French hard liquor with a distinct flavour of its own. Not only will it flavour the figs, but also the overall ice cream. Furthermore, as all alcohol, it will affect the consistency and the way the ice cream freezes.

If you add too much of the Cognac-soaked figs, there is a risk that you

(a) get an unpleasantly overbearing taste of alcohol, and

(b) end up with an ice cream that refuses to freeze.

Even if (a) does not bother you, you still need to reflect on (b).  And if you happen to like Cognac so much that you do not care about either (a) or (b), why not just have some figs and a glass of Cognac on the side?

So, begin by soaking the figs in Cognac for a few hours (or longer). Then, chop them up and set aside for now.

The ice cream base is egg-less but cooked on the stove, and prepared with corn starch, à la Italian gelato. To preserve the goat cheese better, it is only added towards the end of the process, just before the churning. And then, at the very end, the chopped-up Cognac figs are added (possibly even after the churning).

Depending on how much figs you add (= the final amount of alcohol involved),  it may be necessary to stabilise the ice cream further by allowing it additional time in the freezer before serving it. 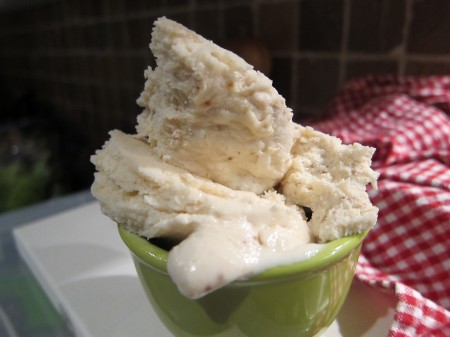 Print
Goat cheese with Cognac figs ice cream
Sophisticated ice cream for all lovers of goat cheese, figs and Cognac.
Ingredients
Instructions
Soaking the figs in Cognac
Preparing the ice cream
Notes
Depending on your own preferences, it is advisable to taste the ice cream base to make sure that the flavours of goat cheese and/or Cognac do not strike you as overbearing. Too much Cognac-soaked figs could also threaten to destabilise the ice cream (it may not freeze properly if too much alcohol is added). However, also keep in mind that flavours tend to be muted by cold - compared to just churned ice cream, an ice cream that has spent a few hours in the freezer may taste less overpowering.
Wordpress Recipe Plugin by EasyRecipe
2.2.1 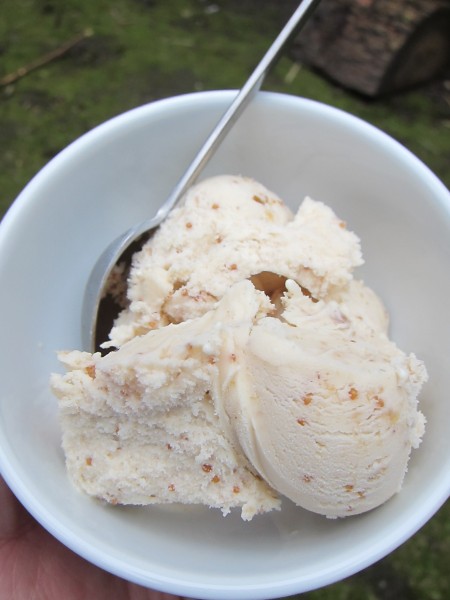