Just in time for the New Year celebrations, Ice Cream Nation turns to mining, and finds a nugget of real frozen gold – a delicate, elegant gelato dessert, able to hold its own in any fancy dinner setting.  And there is also something special for the hard core-fans of ice cream making: a new gelato base recipe, where butter (!) largely replaces cream! And believe me – the result is truly exquisite! 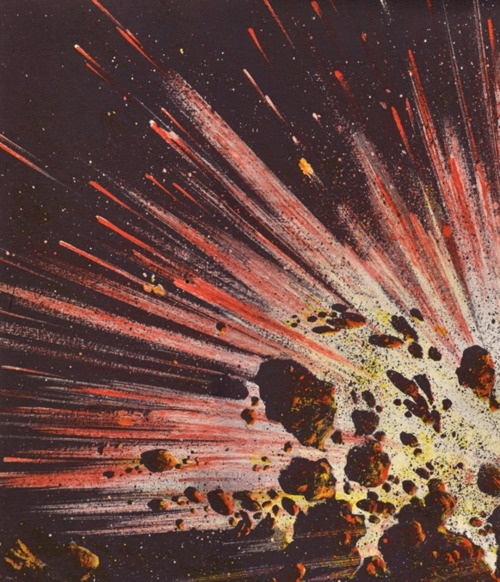 As soon as I read it this recipe, I just knew it had to be tested! I found it in a cookbook based on a Swedish cooking show (“19.30 at my place!”, where ‘common people’ – in this particular case a Mr Dennis Bergsman – rather than famous chefs do all the cooking). Broadly speaking, this gelato mainly owns its superb consistency and texture to a mixture of butter and gelatine [if you have anything against gelatine, I would suggest replacing it with either pectine or agar-agar].

But butter? Butter is – like cream – also dairy-based fat so it may not be as strange as it sounds. And I have heard of at least a few ice cream makers who have used it, although many others claim that butter detracts from the ice cream-tasting experience. Well, in this recipe it sure works well!

I should add that the recipe also calls for a little skimmed milk powder. This is something I normally do not use but it remains a well-known ice cream ingredient, popular with many commercial producers because it (roughly speaking) adds body without adding more liquid, and to a low price. Many people frown upon the use of skimmed milk powder, as it tends to signal reliance upon additives, rather than “natural” base ingredients.

Generally, I tend to favour ‘natural’ myself. But I am still more curious than orthodox … which is why I went along with the skimmed milk powder [if you really hate the idea, you could try to add a bit more cream to the recipe to counter the omission of the milk powder; not exactly the same thing, but should still help to boost the consistency somewhat]. 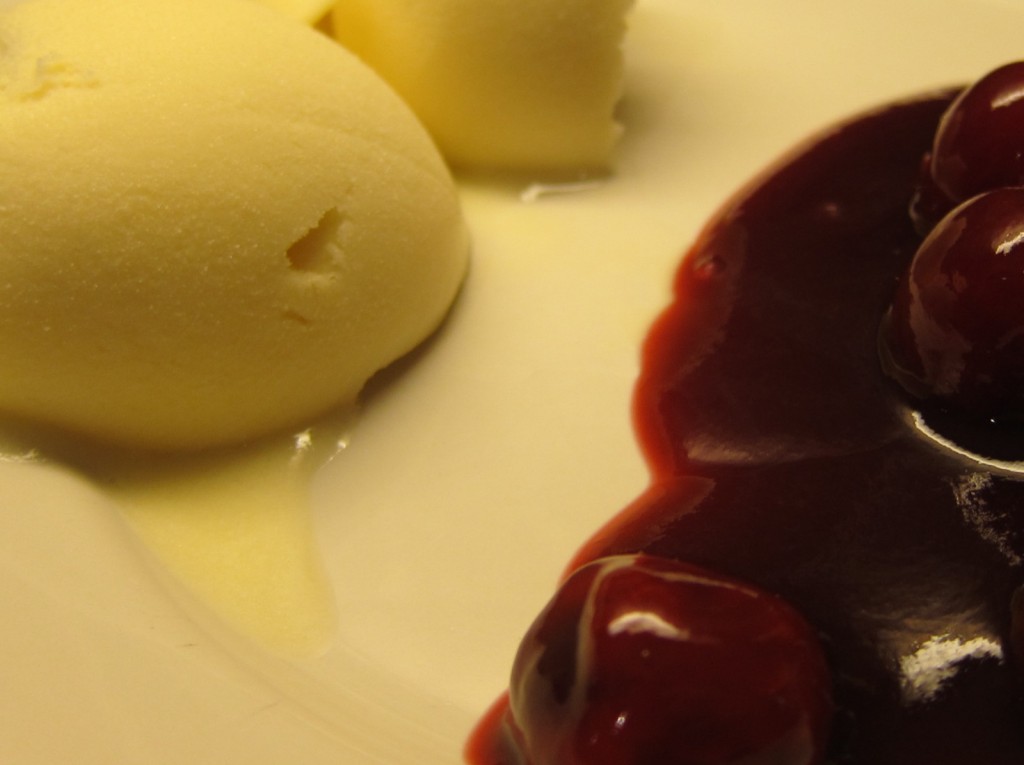 The flavour of this gelato is very elegant and subtle, and many people will probably not be able to pinpoint it to “orange”. But make no mistake – this is in no way something bad: tasting the ice cream is a delightful experience, and the subtle base-flavour marries extremely well with the raspberry wine sauce. And yes, there is a fiery sting to the gelato but again, this only heightens the overall experience and in no way detracts from the pleasure. As stated, this is a frozen dessert which could crown even the fanciest dinner!

The gelato is prepared in three relatively simple steps – first, we make a core base, then an orange-flavoured sugar syrup, and finally we combine the two.

Mix together milk, sugar, butter, cream, inverted sugar (I used agave nectar, but any neutral type – like white-, corn- or glucose syrup and their likes – should do) and a little skimmed milk powder. Bring to an almost-boil and simmer for about three minutes. Let cool down. 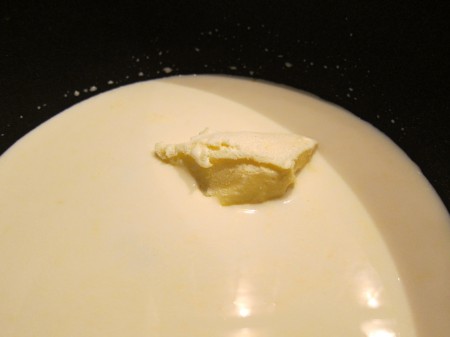 Yes, that’s right: there is butter in this gelato!

(Since there are no eggs in this base, there is no real need to bring the temperature all the way up to ‘custard base standard’ pasteurising levels)

Put the gelatine in some cold water (for at least five minutes).

Warm the (preferably fresh) orange juice together with the simple sugar syrup, black pepper corns and a little chile pepper. 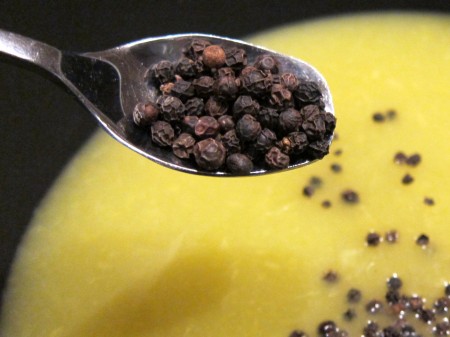 The original recipe only states black pepper but I’d say that also adding a little chile pepper improves the overall sensation a lot!

Let the spices infuse the orange syrup for at least ten minutes before sieving them off. 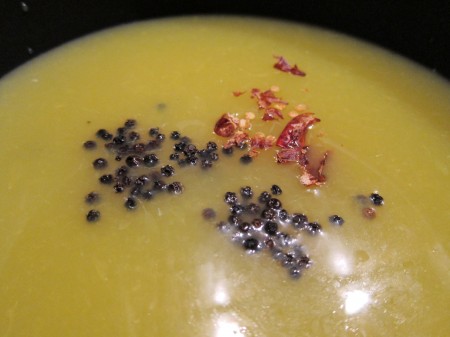 Third step: Combine the core gelato base with the flavoured syrup

Bring the orange syrup to a boil, then take off from the heat. Take up the gelatine sheets from the water and add them to the syrup: whisk and ensure that the gelatine melts completely. Then add the gelato base. Continue to whisk for a while: depending on the acidity of the orange juice and the peculiarities of the butter, the base could possibly tend to break down – resulting in a visible separation and the formation of small butter droplets. But don’t lose heart  – just keep whisking: it will most likely turn out nicely in the end anyway! 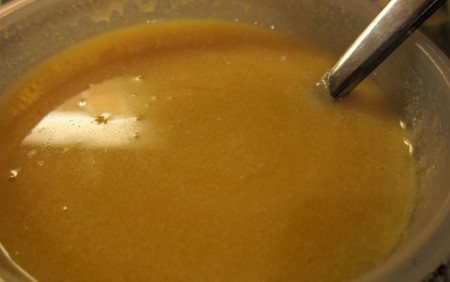 The base may be prone to breaking, but whisking normally improves the situation. And once churned, it most likely won’t be noticable anyway.

Cool the base, let it chill in the refrigerator for at least a few hours (and preferably over night), then churn it in your ice cream machine! If the base shows ‘signs of separation’, just whisk the base again before churning. 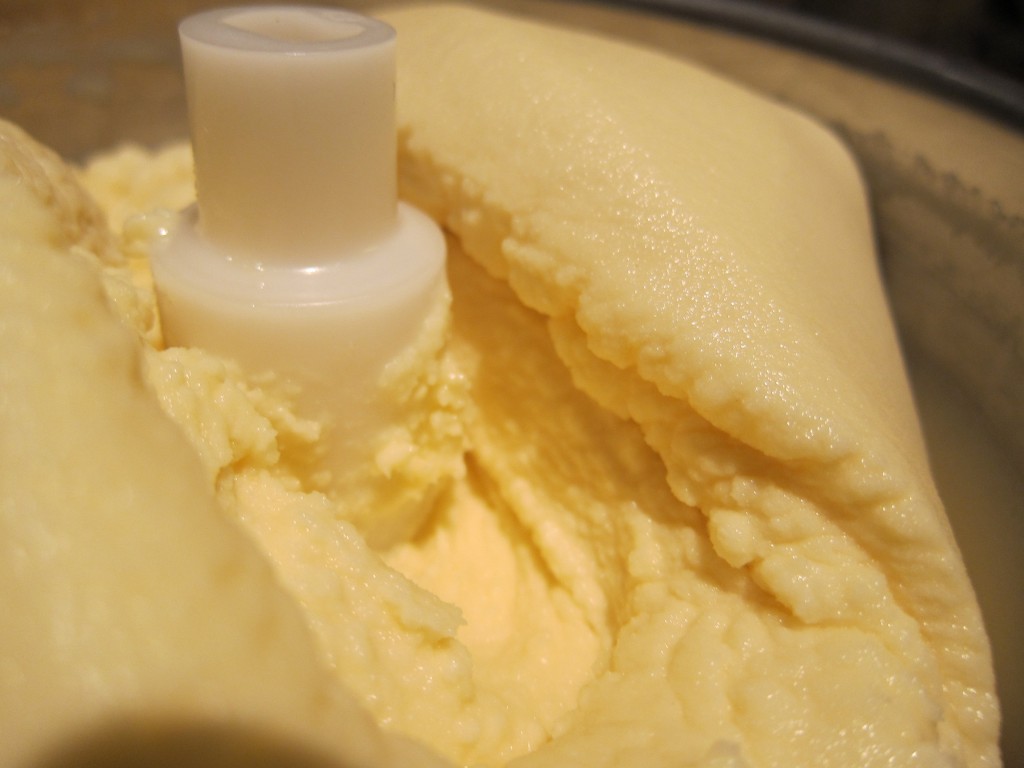 This sauce is created by briefly cooking raspberries (frozen ones will do fine) together with some sugar and red wine. The recipe will yield about 200-250 ml, so feel free to adapt it so you have a sufficient amount. 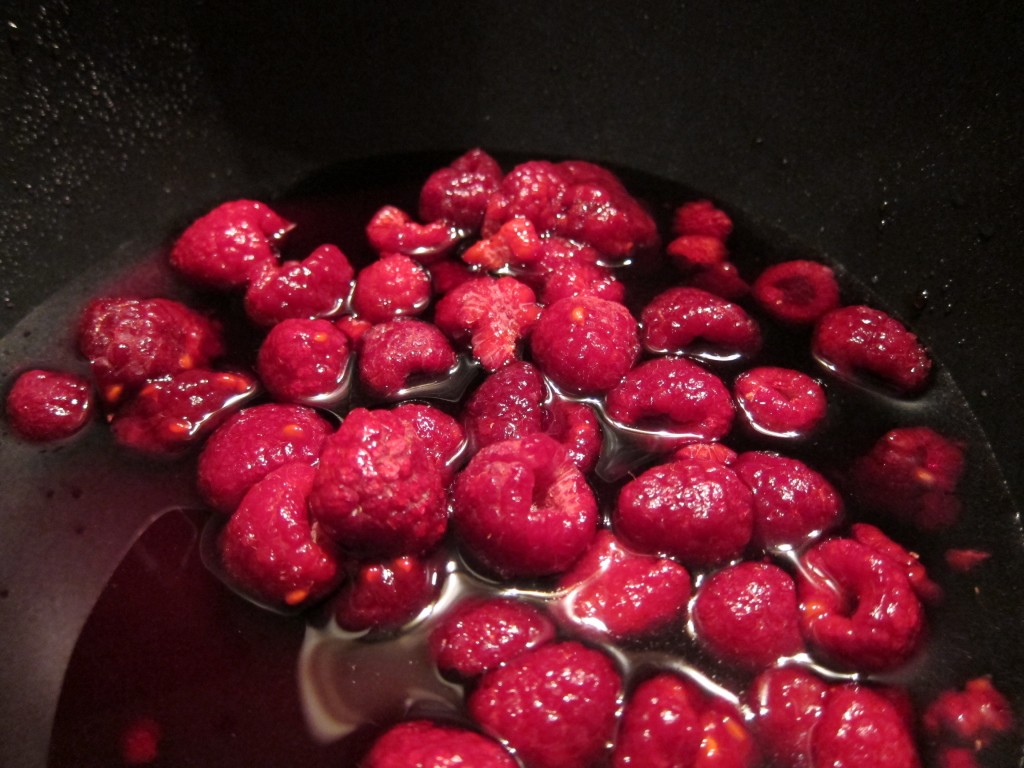 Perhaps you think it is a pity to sieve off the nice raspberries? Luckily, nothing stops you from enjoying them yourself once you have sieved them off 😉

Then, sieve off the raspberries and thicken the sauce by adding of a little corn starch (Maizena; disperse it in a little cold water before adding it to the sauce to avoid lumps). Bring to a quick boil and then let simmer for a couple of minutes. Set aside to cool and, preferably, chill.

If you have the possibility, add some fresh raspberries or other suitable berries to the sauce when it has cooled down (alternatively, set aside a few frozen berries to thaw and use them). 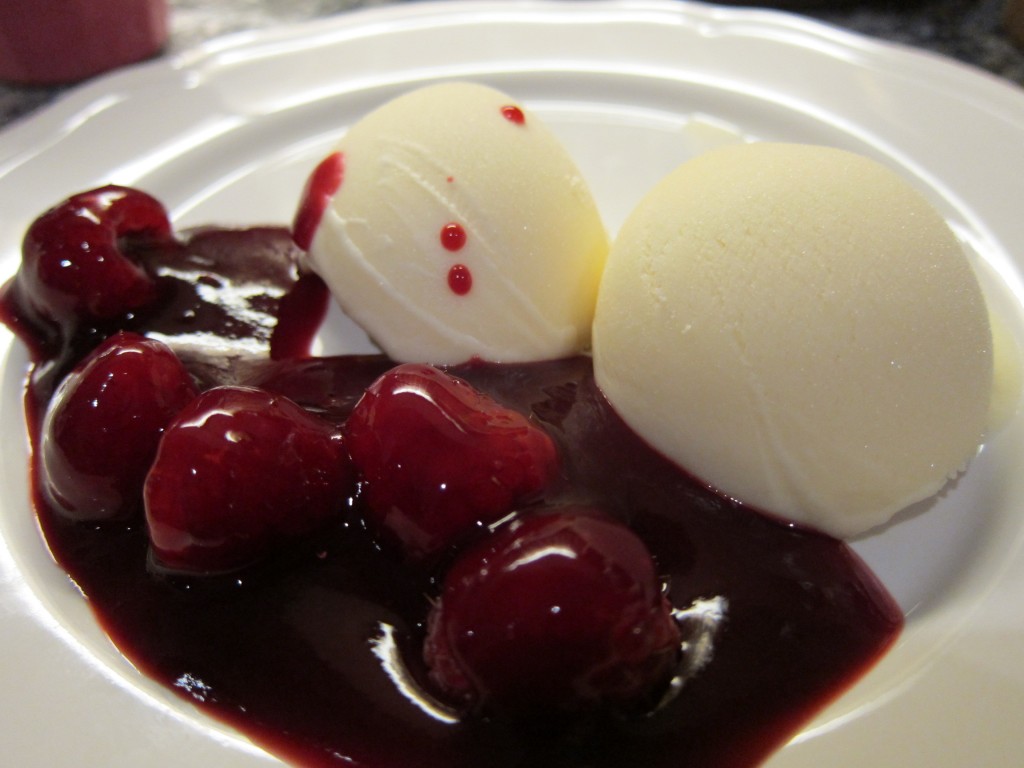 Since I have already heaped superlatives over this ice cream from the start there is not much to add: this is indeed an exquisite gelato! The body and texture is a sheer delight for fans of good ice cream, and the sophisticated, subtle flavour – pleasing in its own right – really swings you to the culinary heights when enjoyed together with the delicious raspberry red wine sauce. And do not be afraid of the peppers used: the black pepper mainly adds to the ‘body’ of the flavour and the chile pepper provides a sweet, noticable (after-)sting which seem to please even those who normally do not like fiery spices.

So, next time you plan a really fancy dinner – this is a regal dessert well worth considering! 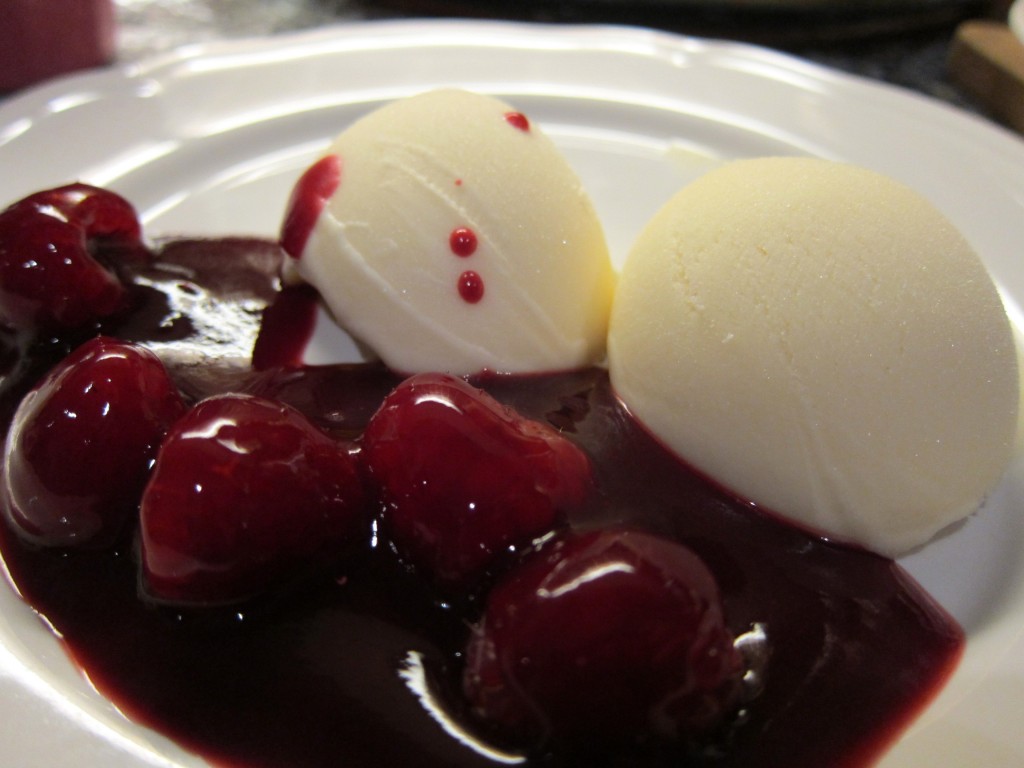 Defends it place in any dinner setting, no matter how fancy