In these pandemic times, lock-downs, travel restrictions and social distancing will most likely put a stop to any prospects of visiting the Italian city of Modica on Sicily.  But what is so special about Modica?  Well, not only is the town a World Heritage site, famous for its baroque buildings and massive amounts of churches. Modica is also renowned for making a very special type of “raw” chocolate – made with an ancient technique called “cold-pressing”, brought all the way back from the Aztecs! Since most of us won’t be able to visit Modica (at least not now), let’s make the best of the situation!

Read on as we’ll try to make some of that “raw chocolate” on our own … and end up with both delicious chocolate and a distinguished chocolate gelato!

Beautiful Modica on Sicily, Italy. The baroque architecture has placed the town on the UNESCO World Heritage list, and it is also famous for its special “raw chocolate” production. 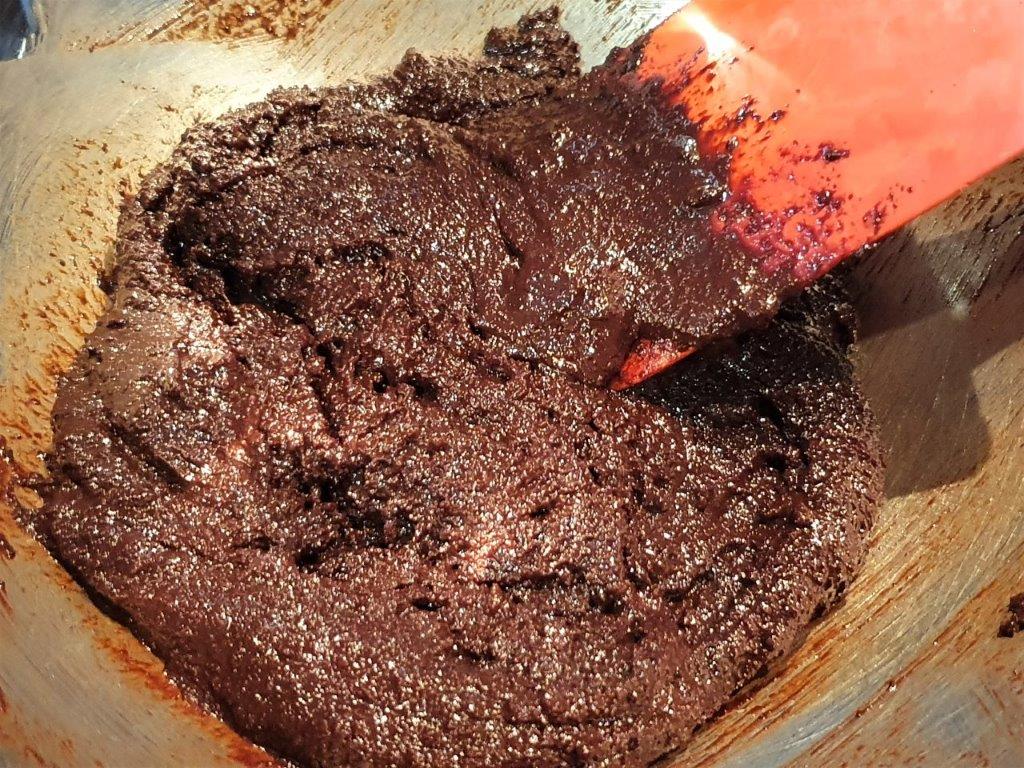 The making of raw chocolate the ol’ Aztec/Spanish way … or the Modica way, if you prefer

A short history of chocolate

As you may know, “cacao” (later to be mis-translated into English as “cocoa”) was originally used by the Mayans and the Aztecs of  Mesoamerica. They would dry and grind the cacao beans, then mix the powder with water and drink it. The Aztecs called this rather bitter drink “xocolatl”, often drank it mixed with chile, and considered it a gift from the Gods, more precious than gold.

The Spanish conquistadors brought cocoa to Europe in the 16th century, where it quickly became very popular among the high and wealthy … especially after someone came up with the bright idea to sweeten the bitter drink by adding honey, sugar and/or vanilla!

Wider popularity did not come about until the 1800’s, when new, industrialised methods lead to a “democratisation” of chocolate which allowed more ordinary people to start enjoying the fruits of the cocoa beans by way of mass-produced chocolate drinks and chocolate bars of the types we still are used to today. 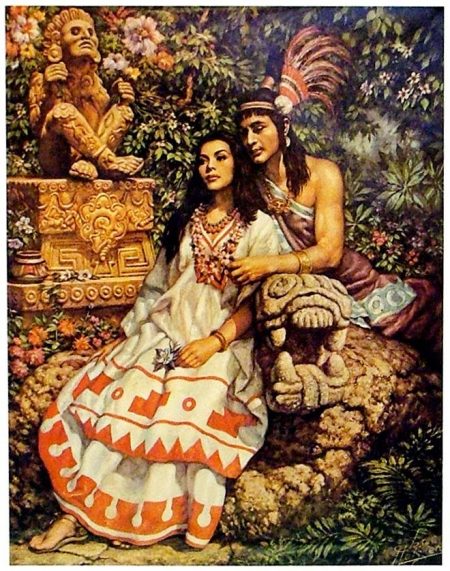 – Look, what if we tried to add some sugar to the Xocolatl next time?

… and a history of “raw chocolate” – the Modica way

But long before the age of mass produced chocolate bars, the Spanish introduced an artisan technique to make chocolate bars, building upon what they had picked up in Mesoamerica: basically, they mixed dried and ground cocoa beans with sugar. During the age of the conquistadors, most of Sicily was dominated by Spain, and so is happened that this Aztec-inspired technique of making “raw chocolate” came to survive to this very day in Modica.

When making chocolate the “modern” way, the chocolate goes through several different phases  of heating , notably during the “conching” (when the cocoa mass is heated and mixed with other ingredients such as sugar), and the subsequent “tempering” when the ‘conched’ mixture is taken through a few more heated sessions before it is considered finished.

When making chocolate the Modica way however, the chocolate mass is only heated to the point where it melts … which – as everyone who has forgotten a chocolate bar in their pocket can testify to – actually translates to less than 40° C (104° F)! This just-about melted cocoa mass is then mixed with sugar (and often some tasty spices, like vanilla, chili, cinnamon or whatever is desired), “cold-pressed” together and left to solidify in a mould: the reason why this “raw chocolate” sometimes is referred to as “cold-pressed”.

The resulting raw chocolate differs from modern chocolate both in taste and texture: it is more rough and grainy, yet lighter, crisper and not glossy at all. Many of the sugar crystals remain intact, and some would say the raw chocolate also has a more aromatic taste. 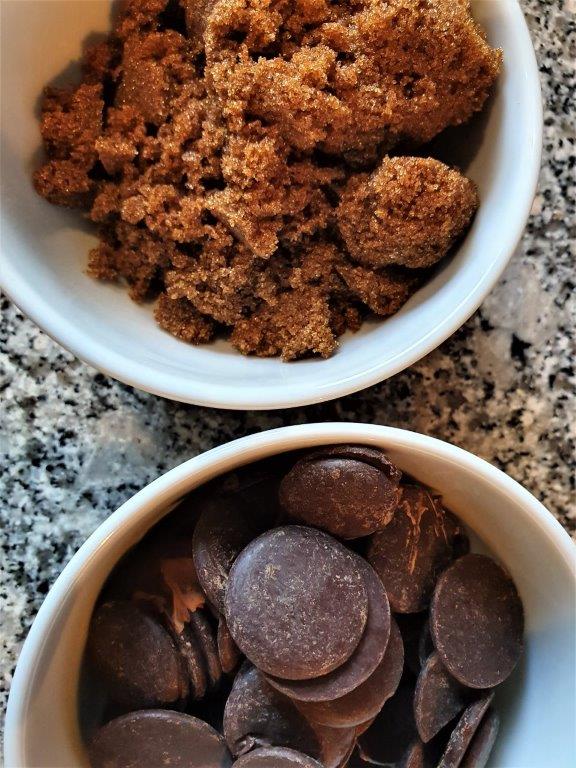 If you want to make yourself a chocolate bar in the cold-pressed tradition, follow the steps below (I picked up the basic idea here!): they probably do it better in Modica but you play with the cards you have, right?

You basically only need two things – unsweetened cocoa mass and sugar. The cocoa mass should have a cocoa content of as close to 100 % as possible (I managed to order my discs on-line), and for the sugar, I went with raw sugar cane sugar (it felt like the right choice for raw chocolate). If you like, I recommend that you add 1/2 a teaspoon or so of any nice spice you believe would go well with chocolate.

Let’s start with the melting of the cocoa mass: use a bain-marie (water bath) and melt the cocoa. Use a thermometer to be sure you don’t overdo it. The cocoa mass will start to melt just a few degrees above normal body temperature and should not be heated beyond about 40° C (104° F). 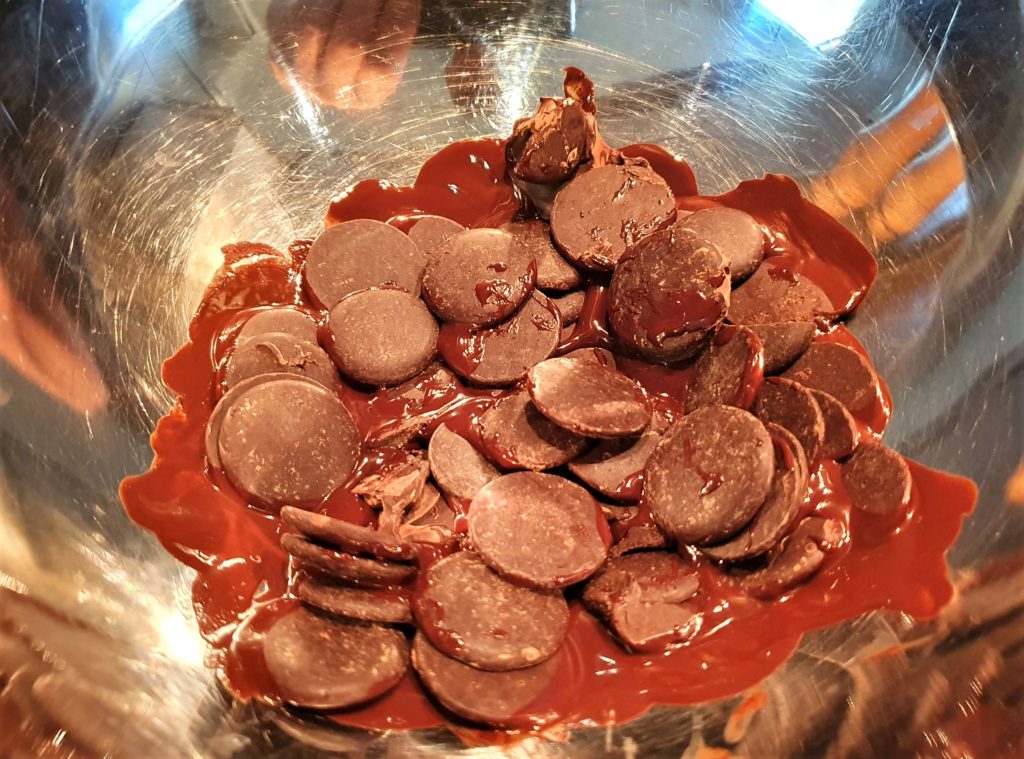 The cocoa mass should only be heated a bit beyond normal body temperature … just enough to melt it!

Once melted, add the (raw) sugar to the mix. How much? For simplicity, use equal amounts of cocoa mass and sugar (by weight). 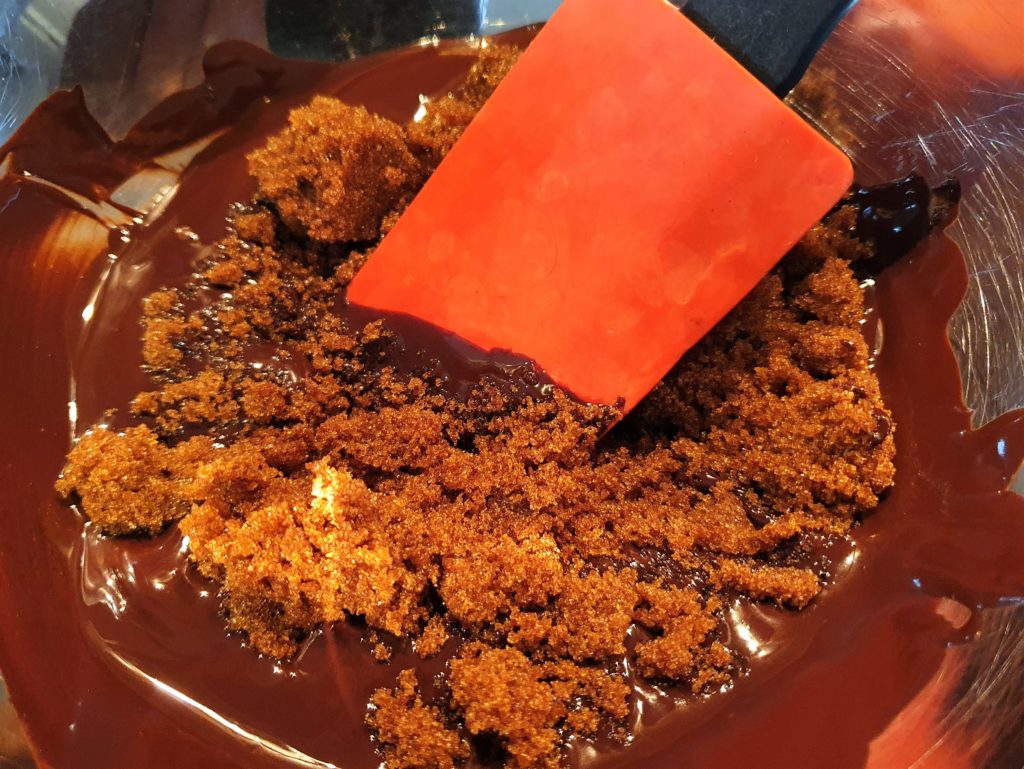 Mixing the raw sugar with the gently melted cocoa mass

Yes – we have made cold-pressed chocolate!  You may now add about 1/2 teaspoon or so of your favourite chocolate spice (like chili, cardamom, cinnamon, vanilla or something else you’d like to include for extra flavouring). Personally, I can vouch for a combination of cardamom and chile pepper 🙂 .

If your goal is to use your chocolate for gelato, put as much of your ‘chocolate batter’ as you need in a bowl and mix it with milk (see further below). What is left can be put in a suitable mould and left to solidify into a raw chocolate bar! 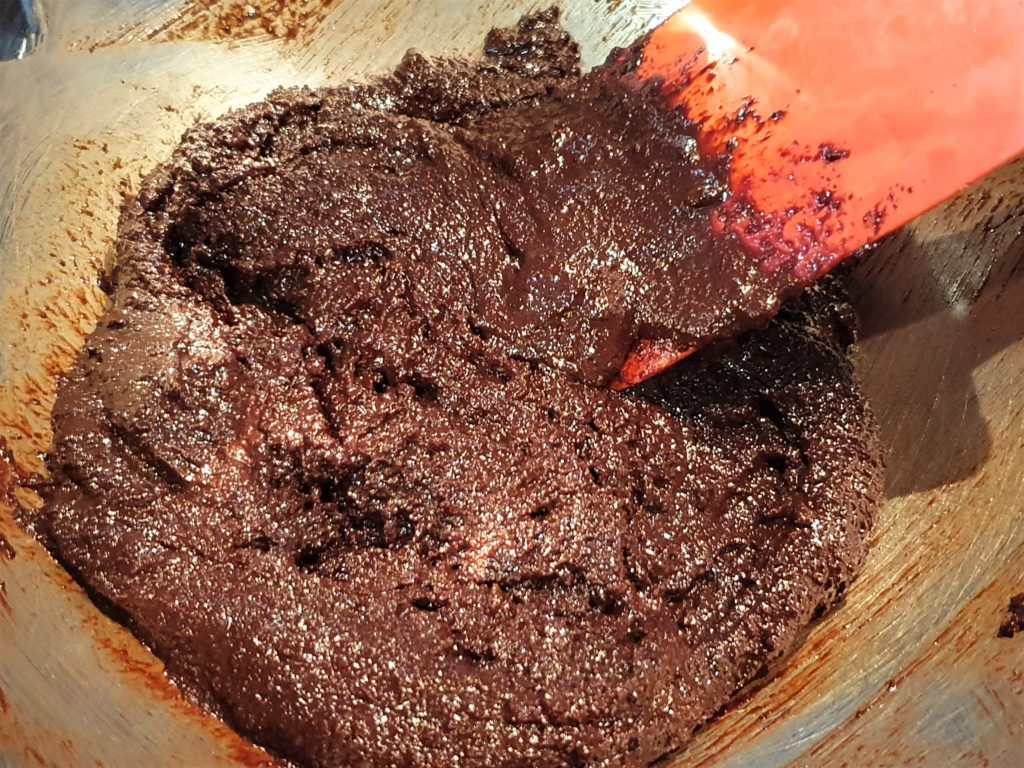 Mmm … if you like to, you could add half a teaspoon or so of your favourite spice(s) at this stage! 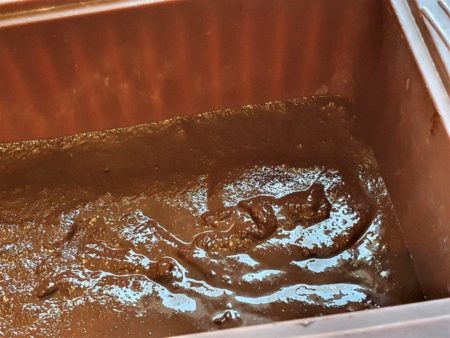 Raw chocolate ‘batter’ waiting to settle. This small silicon mould I found in a cupboard turned out to be perfect for me, but most any mould should work. 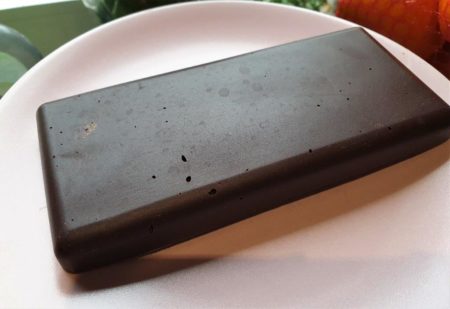 The final raw chocolate bar! Notice that it lacks the glossy shine we normally would expect of modern chocolate. 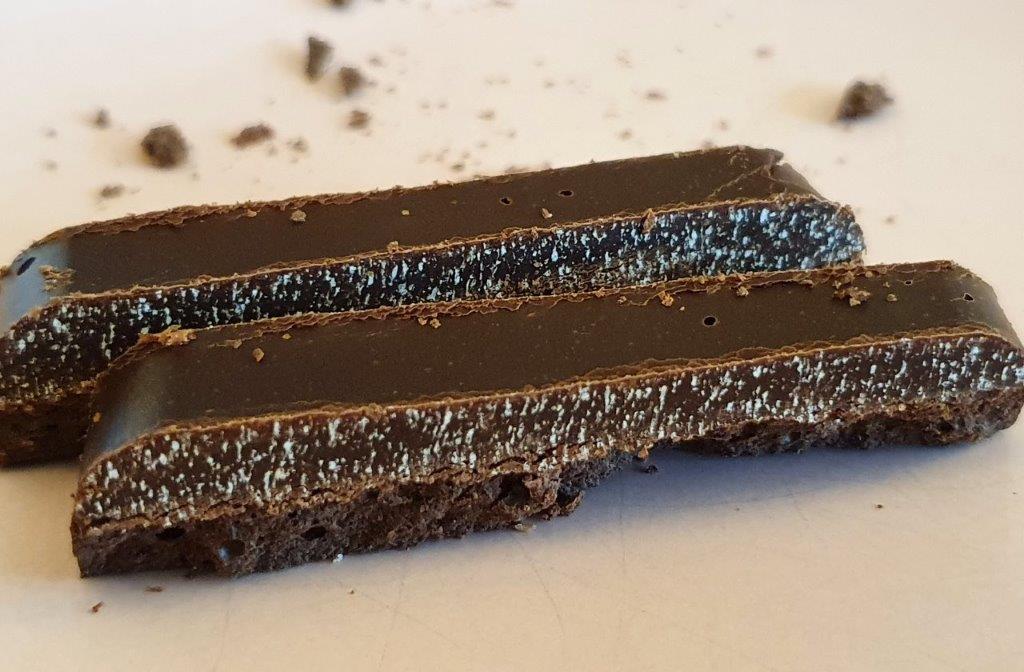 Raw chocolate: the cold-pressing preserves most of the sugar crystals and gives a cruder, more brittle product … yet delightfully tasty  – enjoy it slowly, to savour it properly!

From the chocolate part – onwards to the gelato!

The chocolate technique may come from the Spanish but for the gelato-part, I turned to my Italian gelato-guru Fernanda Gosetti for inspiration. As avid readers may remember, I found her ice cream bible (in Swedish translation!) several years ago in a second-hand bookstore (unfortunately, it still appears to be out of print).

In short summary, the recipe is composed of three parts: the raw chocolate mix, the custard part and finally some whipped cream. In line with Fernanda’s suggestion, I’ll also add a little rhum which should improve the texture and possibly give a little flavour-tinge.

The main reason why I chose this particular recipe as the basis is the following: there is no (re-)heating of the raw chocolate: unlike most gelato recipes, the chocolate will not be mixed with the custard (a key feature in most Italian gelatos) until the end, when both parts are cold. The only heating applied to the chocolate will therefore be the initial “creation-melting” we did above. That sounded perfect for preserving the special cold-pressed qualities of the chocolate, and it also worked out perfectly! 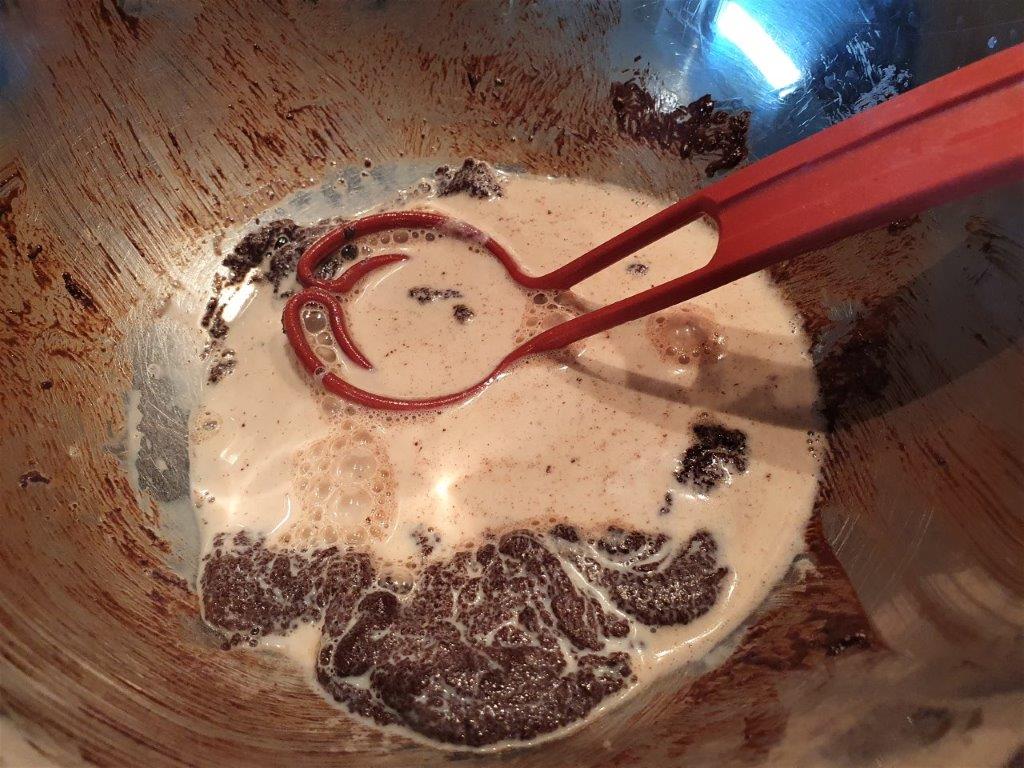 The raw chocolate is mixed with some of the milk. No extra heating, just whisking. And yes, it will look nicer after a proper whisking 😉

So – let’s start with the chocolate part. If you followed the instructions, you should already have your just-created raw chocolate ready. Now mix it with some of the milk before it settles and set it all aside to cool down and preferably even chill. In time, we will combine this mix with the (then equally cold ) custard part and some whipped cream!

Onwards to the custard part. This is straighforward – as usual, I tend to do this the modernista way: just mix the yolks with the sugar and the dairy, heat it up, whisk well and avoid any boiling/scrambled eggs. Carefully bring the custard up to the magic “nappe stage” (=  typically reached in the 82-84º C /180-183ºF-bracket), thus ensuring that the mix has been properly pasteurised and also thickened sufficiently to work well in an ice cream base. As always, a thermometer is recommended here, but in a pinch you can resort to the old “Spoon test”: when you can draw a line that stays on the back of a spoon, the custard should be ready (see the picture below). 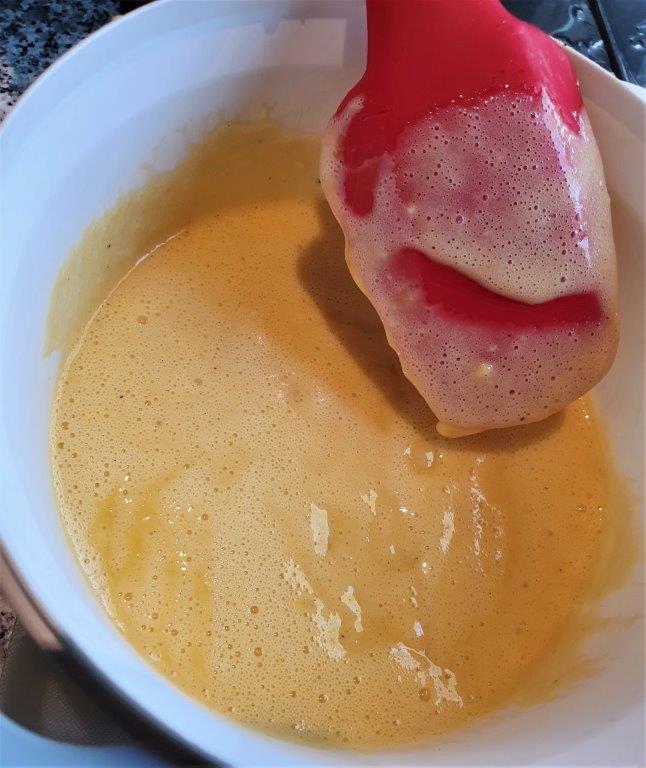 Time to prepare the custard-part of the base. Notice the “line that stays”, which indicates that the so-called Spoon test has been successful.

When both the custard part and the chocolate part are cold (and preferably even chilled), whip the cream and combine all parts! 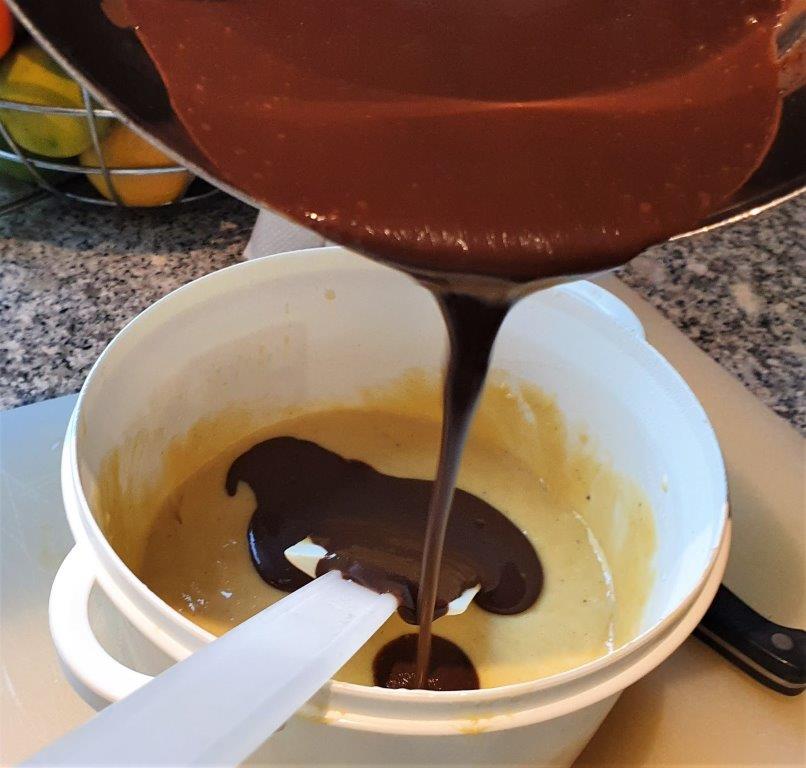 The meeting of the chocolate part and the custard part 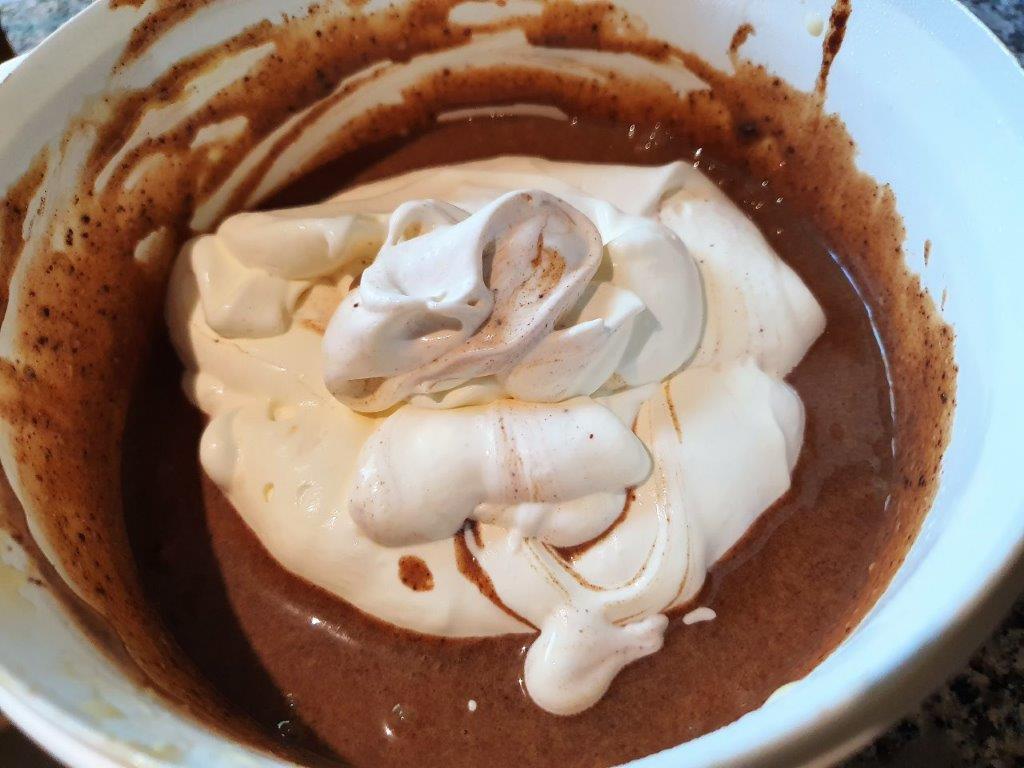 … and here comes the  whipped cream: Now whisk it all and the base is ready for churning!

Churn in your ice cream machine, or still-freeze using your household freezer. 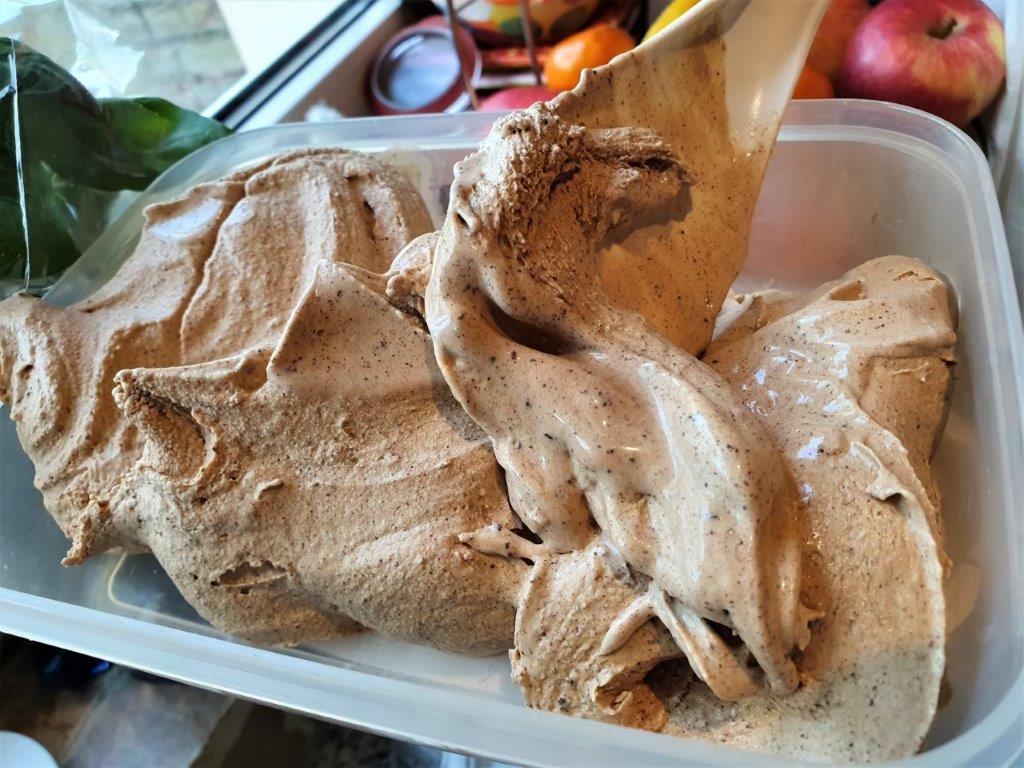 The ice cream fresh from the churning … mmm! 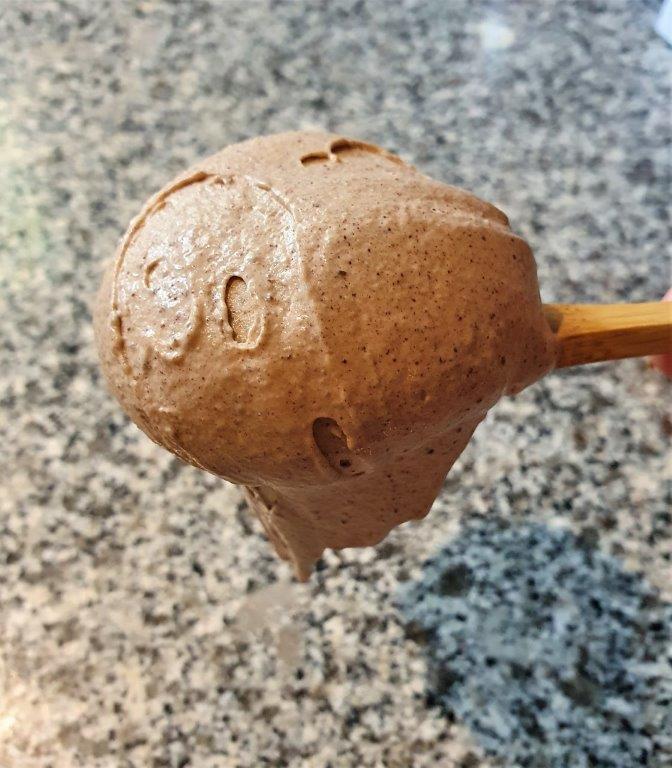 Chocolate gelato is already a classic – and what could be more classic than using cold-pressed, raw chocolate as the basis? I may be unduly influenced by its fascinating history but the cold-pressed chocolate really does appear to provide a particularly alluring, complex and rich chocolate flavour. This is clearly a must to try for anyone who likes dark chocolate! The consistency and texture of the gelato is also great – nice, balanced, great mouth-feel and pleasantly scopable.

So, even if most of us unfortunately won’t be able to visit Modica physically, we can still be there in spirit – by making great cold-pressed chocolate gelato! 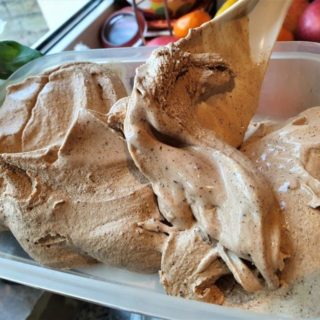 Anders@icecreamnation.org
Adapted after a recipe by Fernanda Gosetti, this variation gives us a gelato made with "cold-processed" chocolate - thus following in the footsteps of the Aztecs, the Spanish conquistadors and in the chocolate-making spirit of the Italian city of Modica!
Print Recipe Pin Recipe

See the post on the website for detailed instructions on how to make your raw chocolate à la Modica! 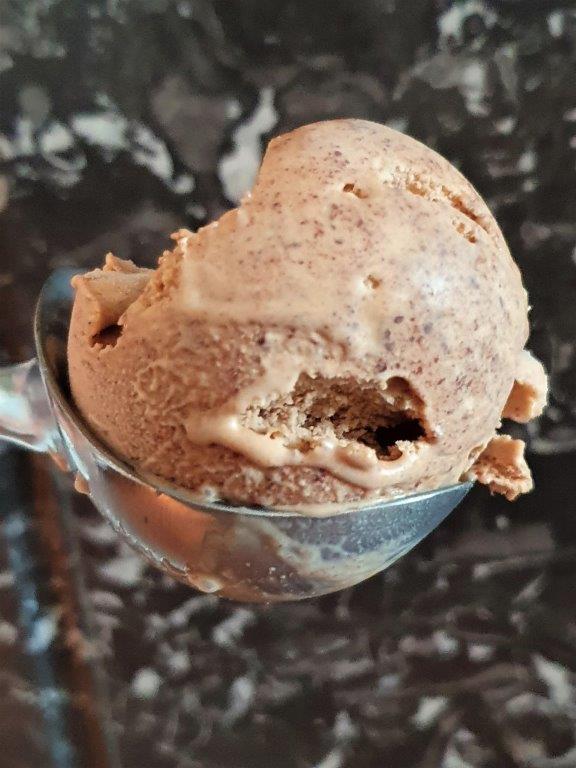 A scope of Chocolate gelato à la Modica, still in great shape after a few days in the freezer.