Nutella ice cream, or Sicilian gelato in a micro!

Nutella may not be the world’s most healthy breakfast ingredient but guess what? You can make a very nice Nutella ice cream with just a few teaspoons of the famous chocolate-hazelnut spread! The base? A nice, egg-free Sicilian gelato! And to make it all even more interesting, we will skip the stove and the saucepan: instead, we will be using a microwave oven to prepare it! 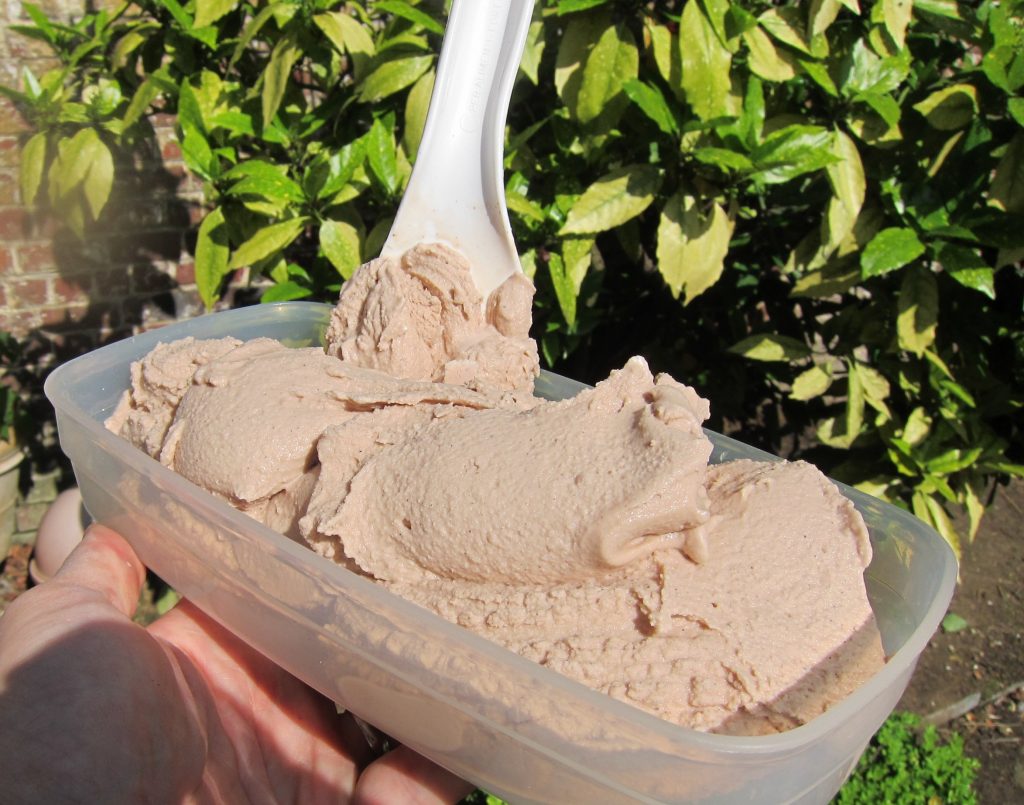 Delicious Nutella ice cream – perfect consistency and great taste … it took less than ten minutes to micro-wave the base!

They say that war is the mother of invention, and that certainly applies to the family of Italian chocolate-hazelnut spreads from which Nutella originates. During the Napoleonic wars, the British blockaded the Mediterranean, and chocolate became a scarce commodity. An inventive chocolatier in Turin decided to extend his dwindling supply of cocoa by mixing the chocolate with readily available hazelnut paste: Gianduja was born!

Nutella is an extremely popular version of gianduja, composed and marketed globally from the 1960’s. Critics tend to point out that the relatively few hazelnuts used per jar of Nutella makes for little complexity: instead of its ancestors’ multifaceted flavour depths, the consumer is left with a broad, crowd-pleasing chocolate flavour with a slight touch of the nuts that once made gianduja so famous. 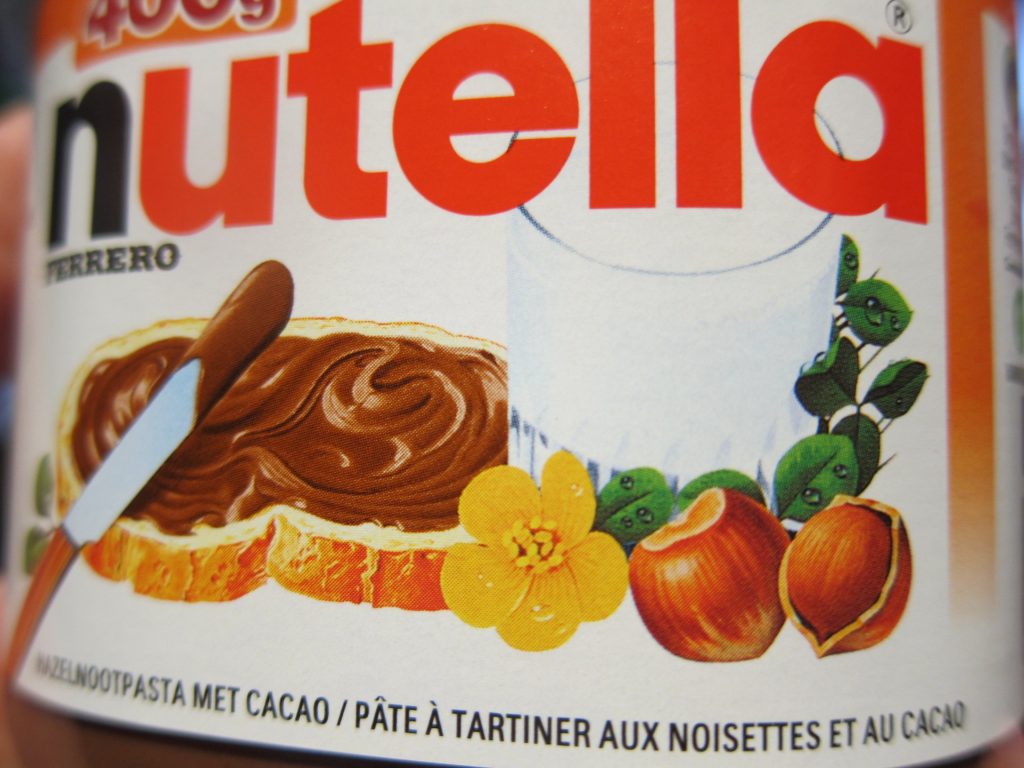 And still, they must be doing something right – I am certainly not the only one who have pondered what kind of addictive stuff they slip into the jars 🙂 .

Nutella may certainly not be classified as “health food”: Luckily, we will only need about a couple of hearty teaspoons of the stuff to flavour our ice cream! 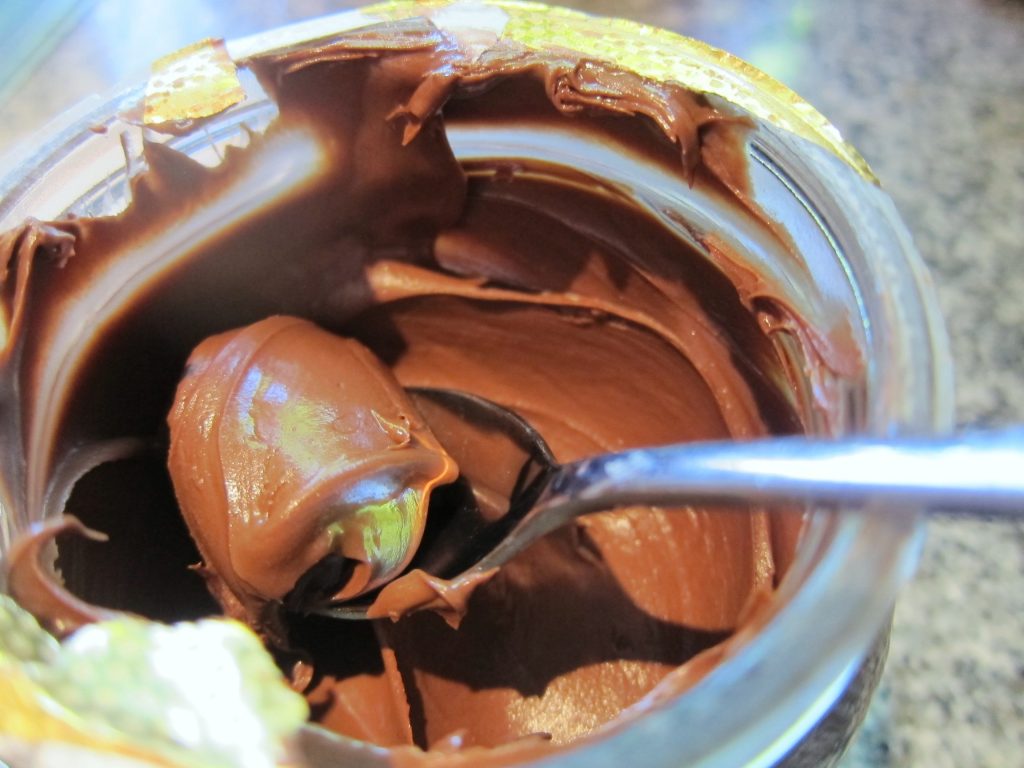 Sicilian gelato – a most suitable companion base to Nutella

Always interested in finding ways to do things differently, I decided to go for the versatile Sicilian gelato-base: As avid readers know, this is one of my absolute favourite ice cream traditions, and will yield nice results without eggs, excessive amounts of cream or other stabilisers. Normally, it is done by cooking a dairy base with some added starch until the starch has reacted and began to stabilize the base.

This time, however, I decided to test if I could make the ice cream in the micro wave oven! Both inspired and guided by Caroline and Robin Weir, I got hold of my kitchen thermometer and set forth!

Preparing the Sicilian gelato base … and micro-waving it!

The basic ingredients should be familiar to those of you who like Sicilian gelato: This time, I opted for a dairy mix with slightly more milk than cream, corn starch (Maizena) and sugar. Since the cooking will take place in the micro, we will prepare the base slightly differently than when cooking it on the stove.

First, mix sugar and the corn starch in a micro-safe bowl. Add 2-3 tablespoons of milk, and work it all to a paste-like consistency. 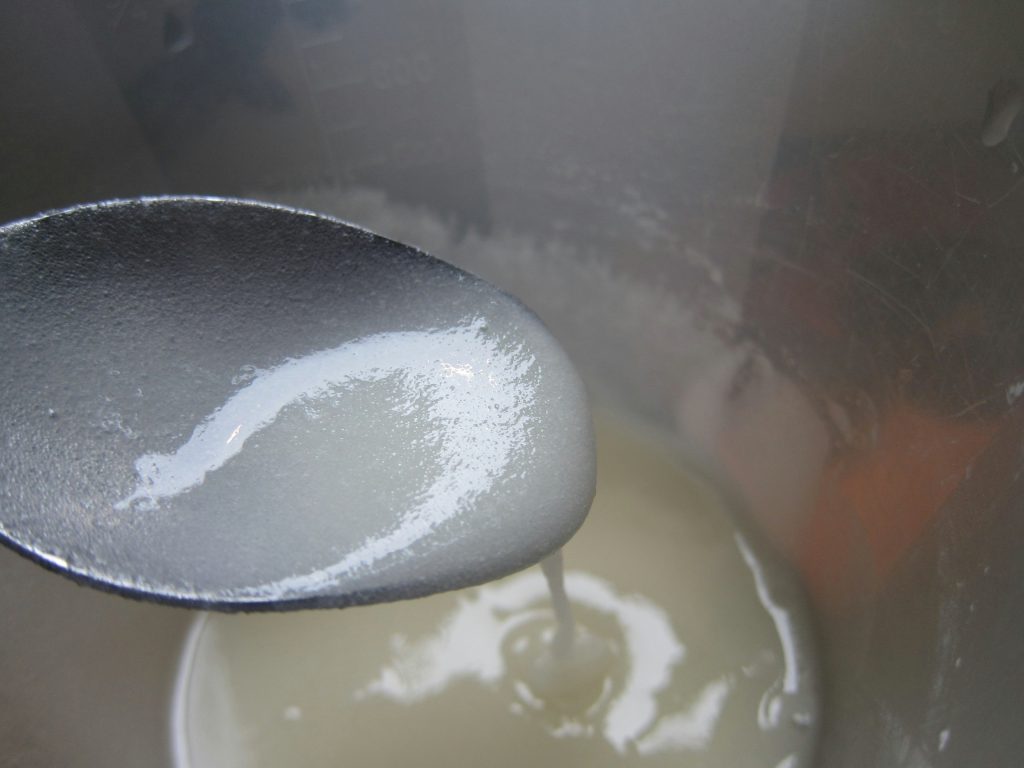 Combine the corn starch, the sugar and just a couple of tablespoons of milk: we are aiming for a paste-like consistency here (the one in the picture is, admittedly, a bit on the runny side … it still worked, though)

Now, add the rest of the dairy.

You are ready to micro the base!

The first aim is to heat our dairy/starch-sugar paste-mix to, roughly, a temperature of 55° C/130° F. All micro-wave ovens are different and have different effects, so how long the process takes will vary. Still – it is a rather quick (for me, with a 750W micro, it took only about 7 minutes of combined microwaving). 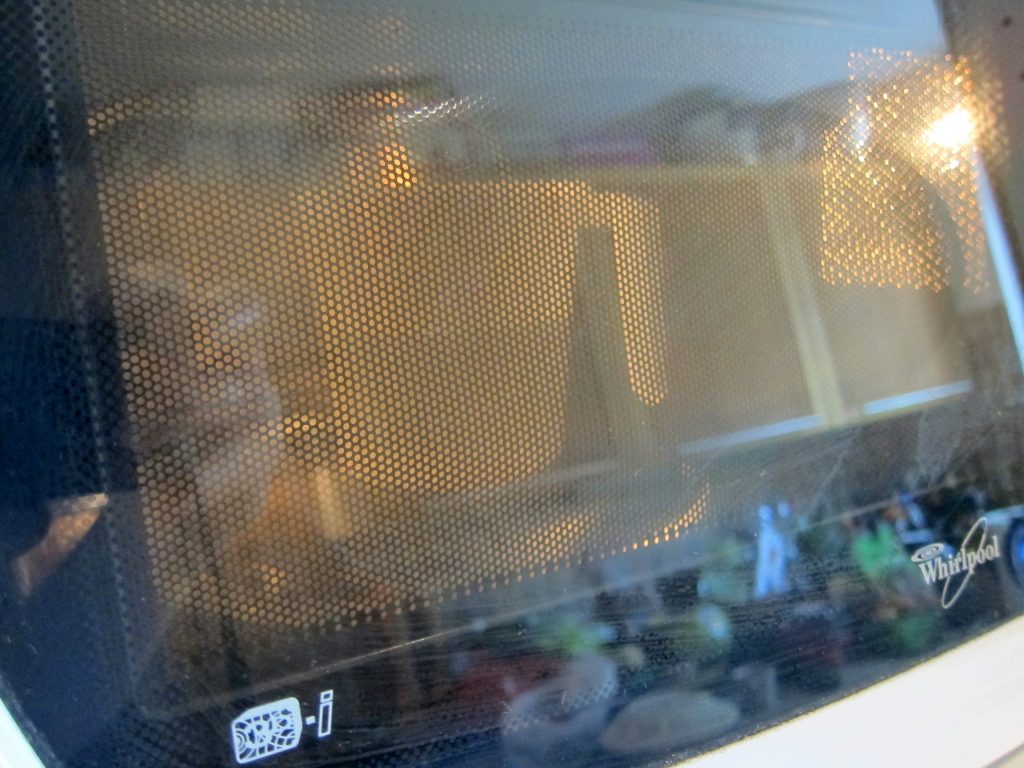 The micro-wave oven – a spin-off product from the development of the radar in the 1940’s. Who could imagine that it could be so effective for making ice cream, not just for melting it?

While there are more or less elaborate ways of calculating how long it will take you (the Weirs present one method, where you basically get to know your micro better by making test-runs on water …), I would suggest that you start by micro-waving for about 2-2 1/2 minutes, check the temperature and then adjust by adding shorter increments (say, +30 seconds at a time) or shorten the suggested starting time for the following phase below.

Once you get to the desired 55° C/130° F, stir well, and add the salt and vanilla (if using) and whisk in about 2-3 hearty teaspoons of Nutella. 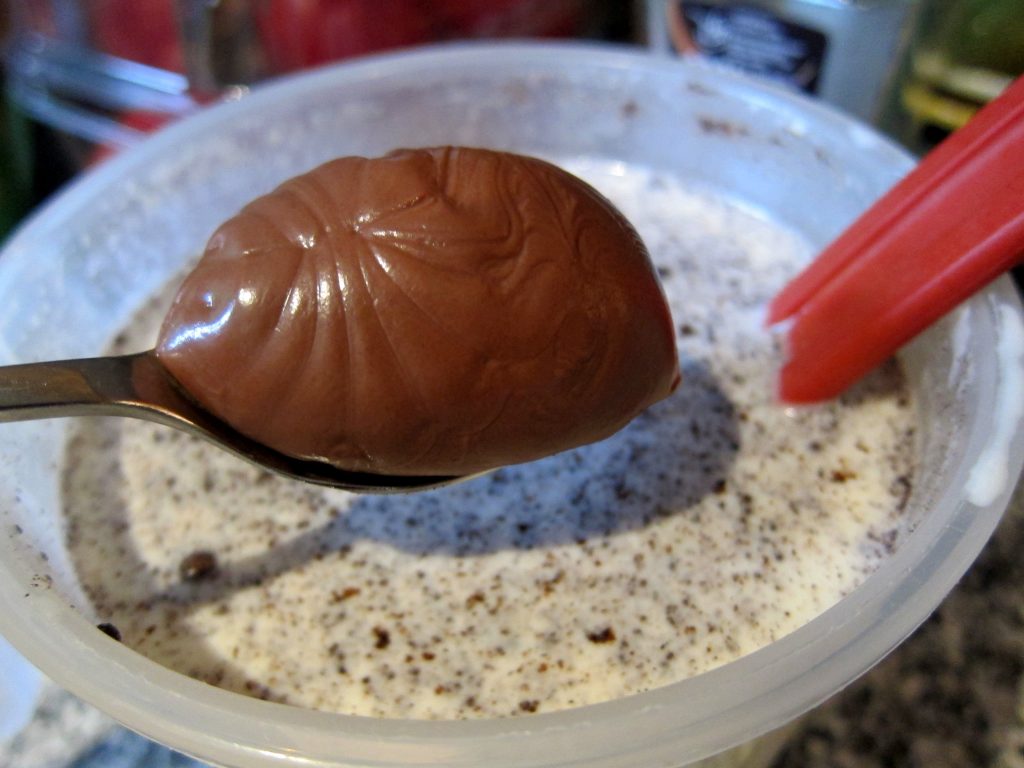 Once the dairy/starch/sugar-mixture has gone through the first stage of heating, add the flavours. As for the Nutella, 2-3 hearty teaspoons is all that will be required to flavour the ice cream sufficiently.

Return the base to the micro. Now aim for a final temperature of about 85° C/185° F (suggestively start out with another 2-2 1/2 minutes of microing and, if necessary, add a few more intervals, checking every 30 seconds or so, until you get there): Finished! 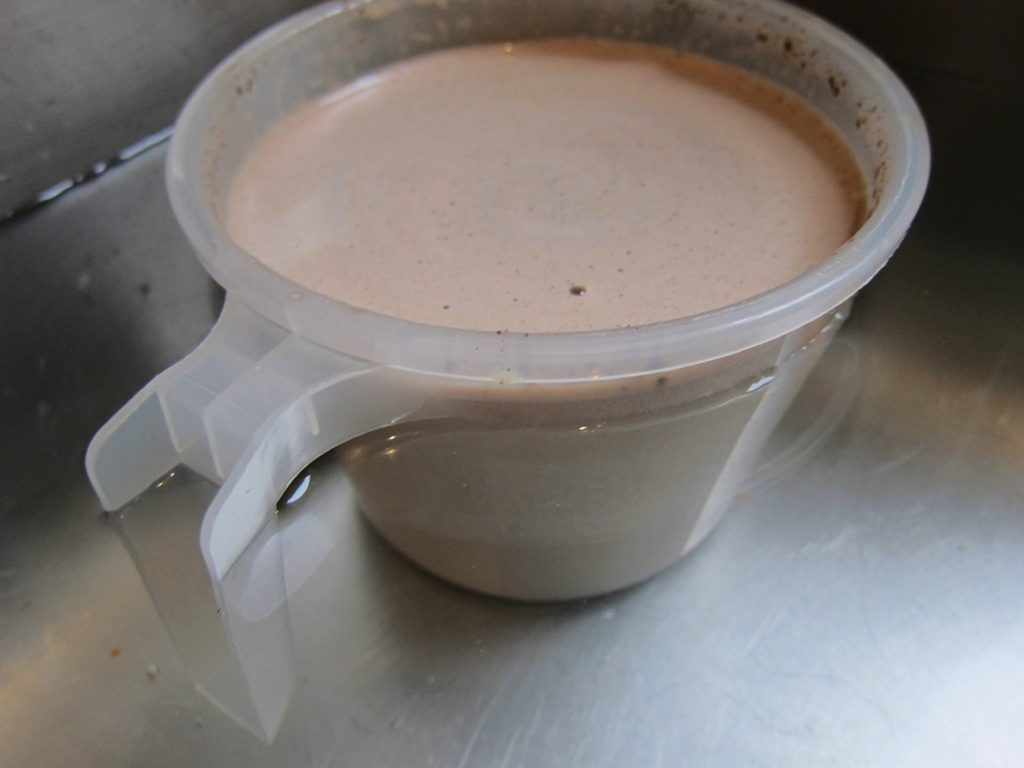 Cooling down is important: even if you don’t have a sea of ice cubes to boost your kitchen sink, you should at least be able to provide a small sea of cold water. Once cooled down, put the ice cream base in the fridge to chill.

Whisk well, and cool down the ice cream base as quickly as you can. When cooled down, let it chill in a refrigerator for a couple of hours or so before churning it. 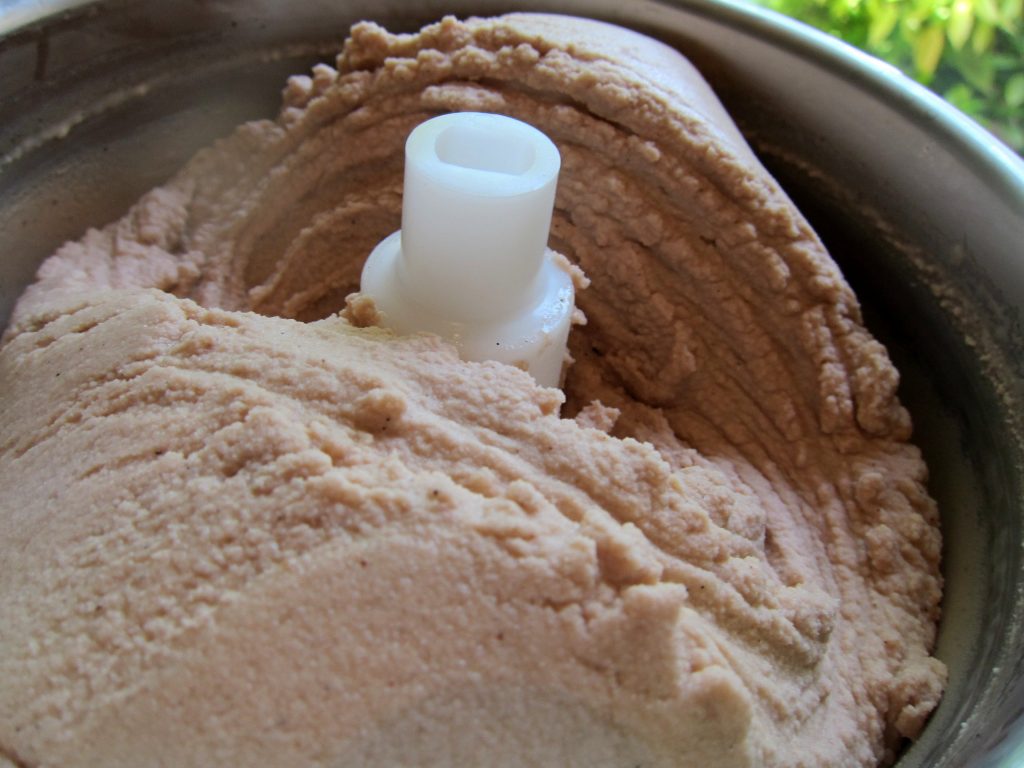 No ice cream machine? – don’t worry: Sicilian gelato might well be the very best ice cream base there is for still-freezing: make the ice cream in your freezer!

A final word on the desired temperature

Don’t be too worried if you don’t manage to hit the exact range of temperatures: Exact temperatures are really more important when dealing with egg-based custards: Starch is much more “forgiving” than egg yolks and as long as you don’t bring your base to a boil, things should be quite fine even if you shoot over 85° C/185° F. Also, since there are no eggs in the base, we do not really need to worry about having temperatures high enough for pasteurization either. However, corn starch can leave a floury tinge if under-cooked, and the heat in this recipe should take care also of that concern. 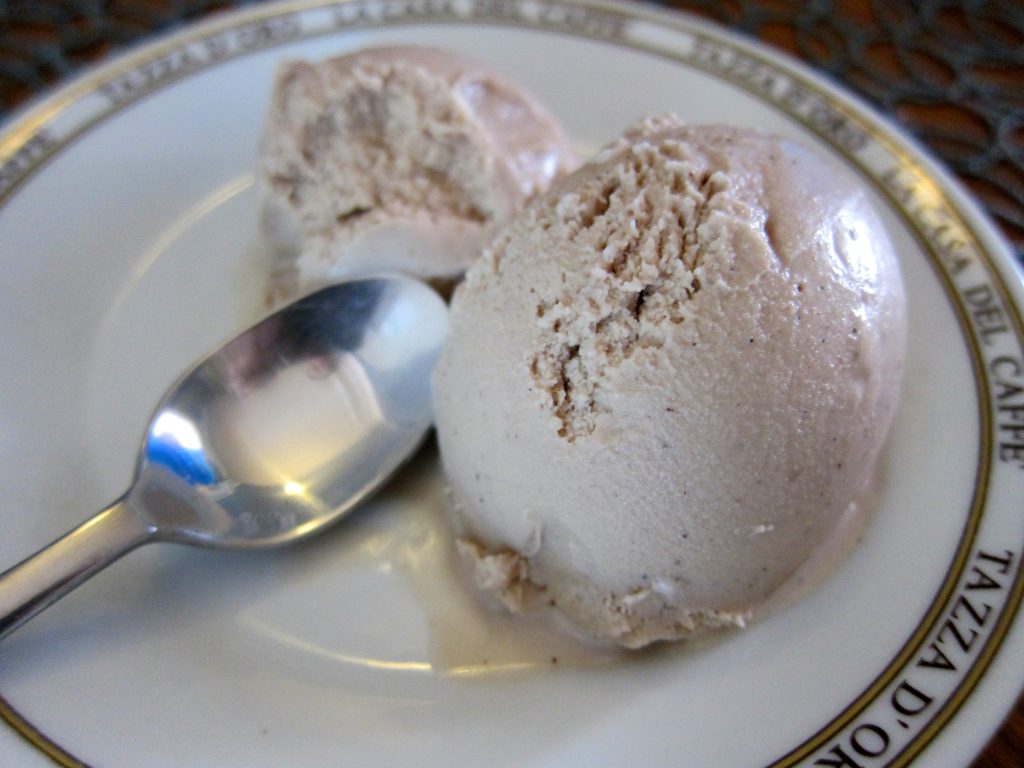 It is surprising that just a couple of hearty teaspoons of Nutella can flavour a whole batch of delicious ice cream so well. But it really works!  Using the micro wave was also a pleasant experience: taking the temperature of the ice cream base-bowl at certain intervals was much less taxing than standing by the stove and stirring the base in a saucepan, watching so that it would not begin to boil.

I must confess that the base seemed worryingly ‘un-thickened’ after the time in the micro wave. However, the end result spoke for itself – it was perfect! The ice cream itself turned out smooth, with a very nice consistency and a pleasant, mild flavour ready to seduce most tasters: when tested on friends and family, there was universal acclaim and frequent demands for more!

All friends of chocolate in general and Nutella in particular should certainly check out this delicious crowd-pleaser!

Print
Nutella ice cream (Sicilian gelato-style in a micro)
By: Anders@icecreamnation.org
A deliciously smooth and tasty Nutella ice cream, based on a very simple-to-make base of Sicilian gelato prepared in less than ten minutes in a micro wave oven! Arm yourself with a kitchen thermometer and set out!
Ingredients
Instructions
Notes
Here is the link to the post on how to make ice creams without an ice cream machine (still-freezeing): https://www.icecreamnation.org/freezer-only-make/
Wordpress Recipe Plugin by EasyRecipe
3.3.3070
Share