While skiing in Chamonix, France, I found a quite peculiar ice cream flavour in a local ice cream parlour – Mont Blanc. As luck would have it, this eventually lead me to one of the most fabulous ice cream creations I know – read on!

Monte Blanc is the highest mountain in the Alps and in the European Union, and it all made a lot of local sense, as that very mountain was clearly visible from where I was standing. But what flavour was it? I bought a scoop – it was chestnut ice cream, with crumbles of white meringue (“snow”) mixed in! 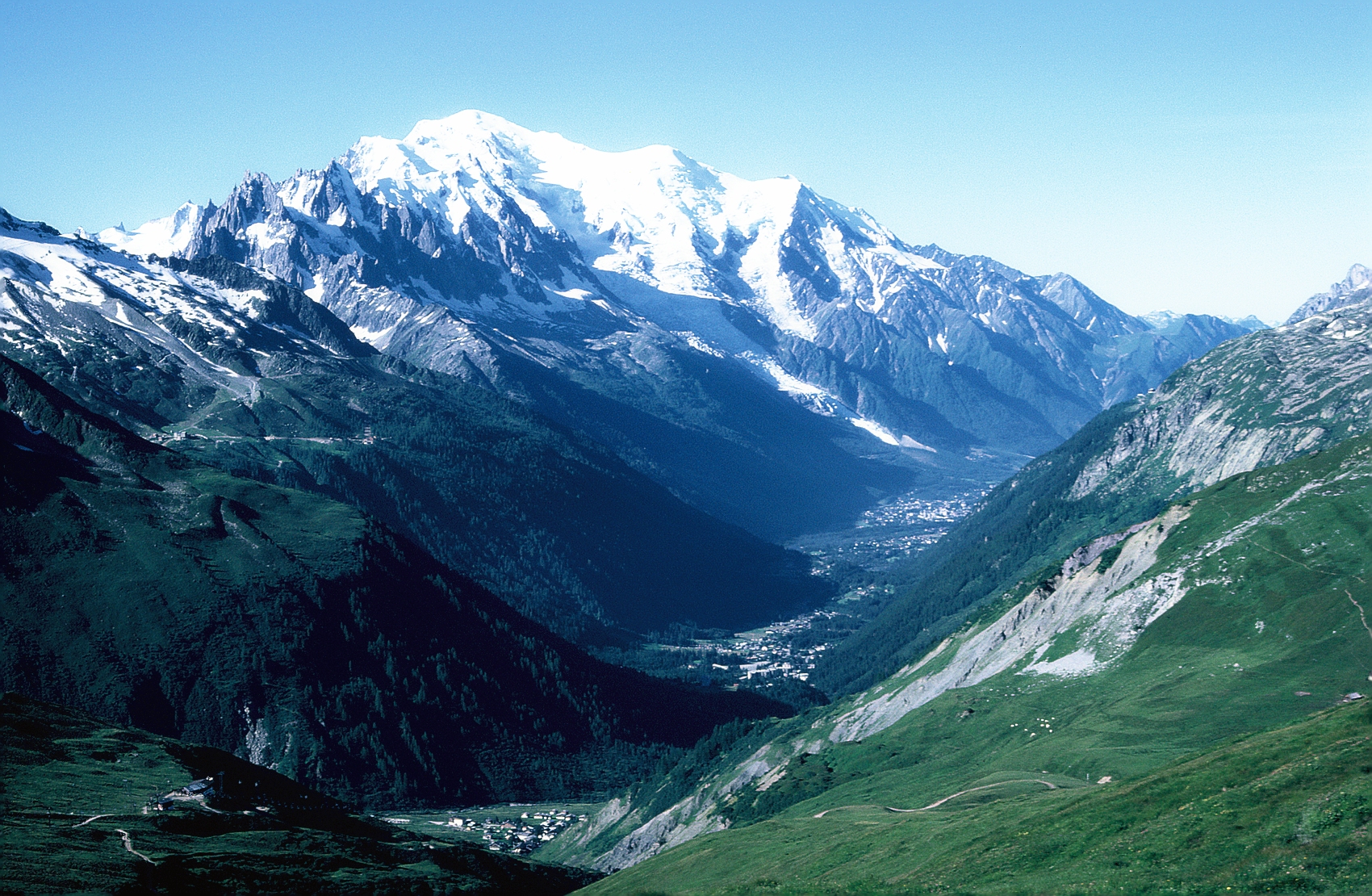 The classic Monte Blanc dessert (or Monte Bianchi, in Italian) is largely a ‘mountain’ of chestnut purée, topped with some (snow-like) whipped cream. Since I am much more fond of ice cream than of cream itself, I decided to re-create the dessert but as an ice cream. 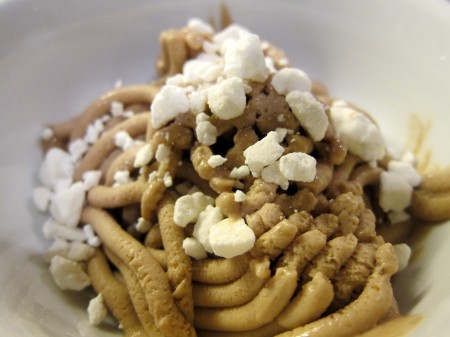 No, it is not the mountain itself – it is the Monte Blanc frozen dessert in the making

There are many ways to prepare chestnut ice cream: typically, however, you would normally need some chestnut purée to begin with. Whether you harvest and prepare your own, or – like me – go to the store to buy some is up to you.

Once you have secured the chestnut purée, it is time to choose a good ice cream recipe. You could choose any of the classic basic recipes (American style, Italian or French style, starch-based Sicilian style) and simply add a desired, sweetened amount of chestnut purée. This is perfectly OK, and will result in, well, chestnut flavoured ice cream. And to tell you the truth, the chestnut gelato I enjoyed in Chamonix was about that good – perfectly OK, but not really something to write home about.

But for this post, I have tested an adaptation from a recipe by world-famous chef Michel Roux. In certain ways, his basic way of preparing the ice cream base deviates from what is considered ‘standard practice’ – which made it all even more interesting to try! And believe me – it is well worth trying! 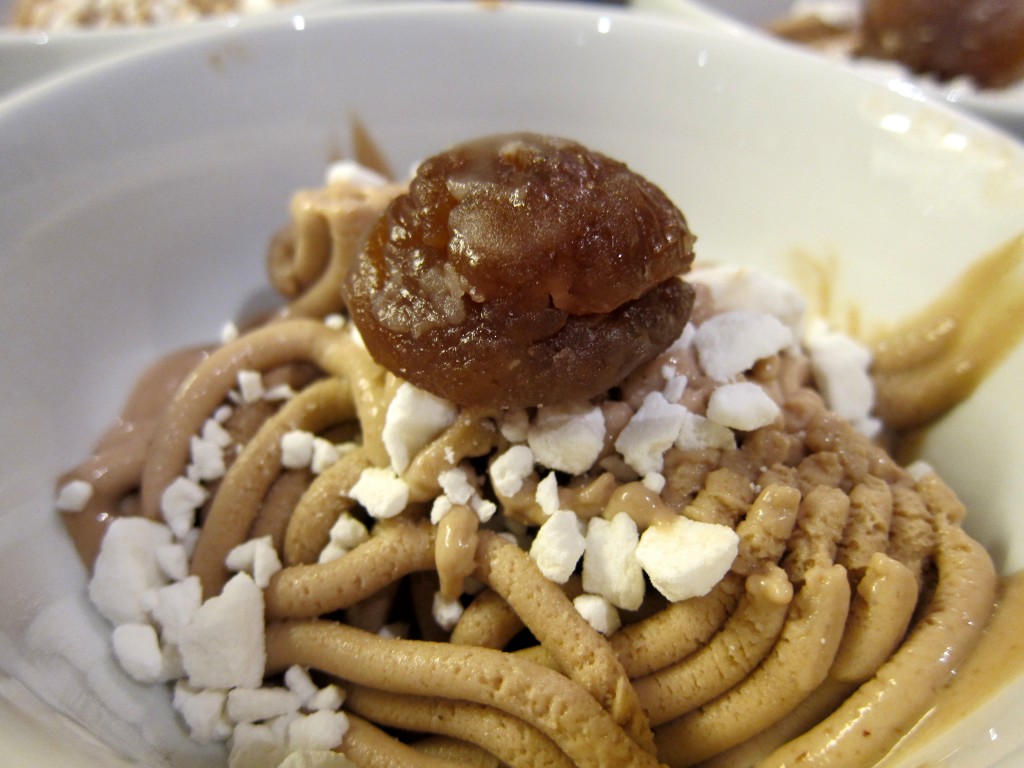 To really top it off, you should try to get your hands on some marrons glacé – exquisite candied chestnuts, and a famous dessert-sweet in its own right. I have read some recipes for making them at home, but getting them right seems rather difficult so if you are lucky enough to find them in a shop, I’d suggest you go for ready-mades. And if you don’t find any, the Mont Blanc dessert will work well anyway – just remember to crumble enough snow-white meringue over the final ice cream mount 😉 .

The steps are quite straightforward, and should not be problematic for those accustomed to making custard-based ice cream (i e, the Italian-French type). Like many classic custards, it uses quite a lot of eggs: together with the cream, this eventually also ensures that the final ice cream does not feel particularly chilly on the tongue, as there will be less hard-frozen ice crystals around.

As ice cream science tells us, fat [as contained in the egg yolks and in the cream] is one of the cornerstone ingredients in ice cream, ensuring a nice, smooth consistency – mainly because it hinders the ice cream’s more ‘liquid parts’ from forming too much ice crystals, and because it is good at capturing and maintaining air. Sugar, working as an effective de-freezer, also fights the ice crystal-formations. But real fat is relatively expensive, which means that many cheapo ice creams contain less, or little of it … with the ice cream also ending up feeling colder in the mouth. Our creation, however, will be a very high-premium ice cream! 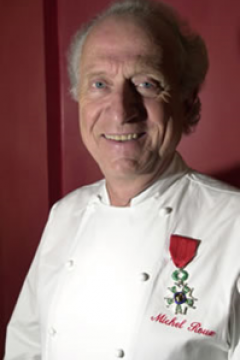 Roux’s original recipe calls for the traditional tempering of the egg yolks, but a modernist approach (putting all the ingredients to be cooked together from the very start, skipping the tempering step) should work fine as well. Out of respect for Roux, however, I will set out the “traditional way” below:

Start by whisking the egg yolks with some of the sugar.  Set aside and, in a saucepan, whisk together the rest of the sugar, the milk and the chestnut purée and bring to an almost-boil. Note that the cream will only be added later – during the actual churning!

Little by little (and while whisking all the time), drizzle the hot chestnut-milk into the egg yolk-sugar mix. To ensure proper and healthy pasteurisation, bring the ice cream base to the nappe stage (with a temperature up to 85º Celsius/185º F), making sure to continue whisking all the time.

Once at the nappe stage, take the ice cream base off the heat and let cool down as quickly as possible. Add the rhum, if using (using rhum is highly recommended, since it gives much added depth and complexity to the overall chestnut flavour!)

Once the base has cooled down, let it chill in the refrigerator for a few hours or preferably over the night.

Serve immediately or store in a freezer-safe container (covered with plastic film and a lid).

A nice serving suggestion is to prepare suitable serving cups or plates, and then pass the ice cream through a potatoe ricer – you will get nice, thick spaghetti-like strings of ice cream!

When you have built your ‘mountain’, drizzle over some roughly crushed pieces of white meringue for a snowy effect. Top it all with a marron glacé (chestnuts in syrup) and serve!

In a chestnut shell … 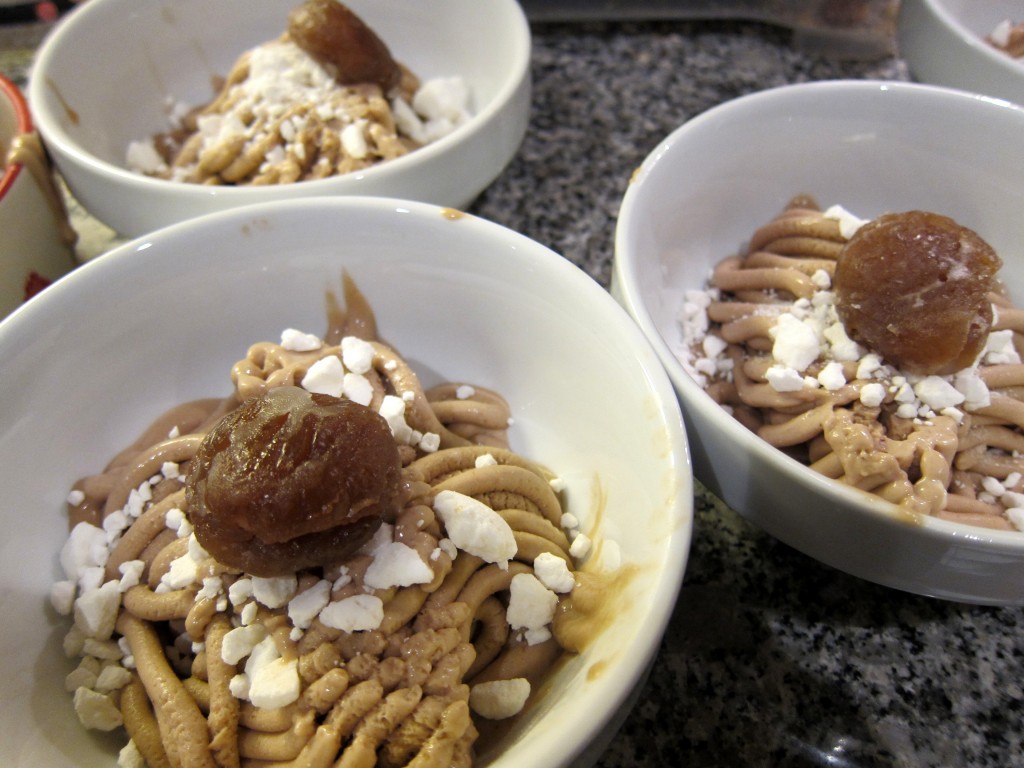 This chestnut ice cream dessert is one of my personal favourites, and its rich, delicate flavour never ceases to amaze me: the rich chestnut flavour, perfectly and harmoniously complemented by the grown-up lining of the rhum, is incredibly tasty. For those of us who like to collect illuminating and memorable flavour-experiences, chances are high that enjoying the Mont Blanc will be one of them. Without a doubt, the chestnut ice cream is the best I’ve ever had – anywhere.

Presented in the classic way – shaped as a stylized little mountain with meringue-flakes as snow – this is also an ice cream that will do very well as the crowning dessert to any finer dining. Do yourself a favour and try it!