Ever dreamt about living the life of a Sultan?  Here is your chance!  The inspiration to this stylish and delicious sorbet comes straight from the palace of the old Ottoman Empire! Close your eyes and savour the flavour of pomegranate sorbet, with intriguing flavour-twists added by aromatic spices such as ginger, cinnamon and clove. 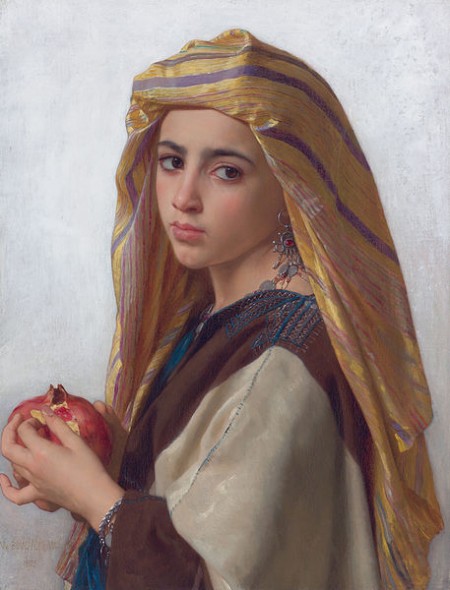 Pomegranate juice forms the main base for this delicate sorbet, inspired by a şerbet – a cold refreshment dating back to the ancient days of the Ottoman sultans.

“Have a sharbat and a smile” – leisure drinks of the past

What did people refresh themselves with before the age of mass-produced carbonated drinks? Well, if you lived in old Persian/Ottoman/Mughal times and wanted liquid refreshment, chances are that you would have looked for some nice sharbat (or sherbet, or şerbet) –  sweet soft drinks flavoured with herbs and/or flowers and – if possible – served chilled. Since ice creams as we know them today were not quite invented at that time, and also considering Islam’s ban on alcoholic drinks, sharbats were the refreshing beverages to enjoy in those days. And drinking sharbats was not something exclusively for the rich and the famous either.

Special sharbat-vendors would peddle the drinks in the streets, important celebratory events like weddings and childbirths would not be truly complete without a suitable amount of sharbats. Drinking them was a common pleasure, and the sharbats managed to stay popular for centuries – it was only the arrival of the fizzy carbonated drinks of the industrial age that finally put an end to their particular refreshment hegemony.

While “sherbet” today often means (at least in the US) a sorbet prepared with added milk, the word comes from the Persian “sharbat” (an adaptation of the Arabic word for drink; “sharab”). Sherbet eventually entered the Italian language as sorbetto, and the English language as sorbet, which – as we all know – no longer qualifies as a “drink” (unless totally melted 😉 ).

I mentioned Ottoman days, and today’s post is actually directly inspired by a visit I once made to the Topkapı Palace in Istanbul, Turkey. This impressive palace (today a museum) was the primary residence of the Ottoman Sultans for hundreds of years, and the widespread grounds cover over 700 000 square meters, complete with harem, gardens, treasury and the rooms for the Sultan’s council. It goes without saying that quite a lot of sharbats must have been served within the walls of this mighty palace. 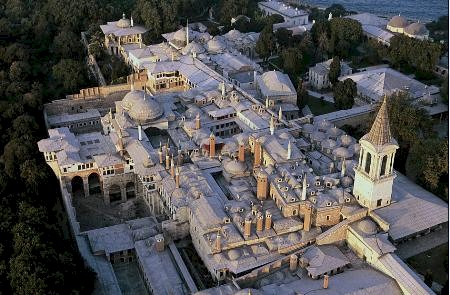 Topkapı Palace Palace – the official and primary Istanbul residence of the Ottoman Sultans from 1465 to 1853. 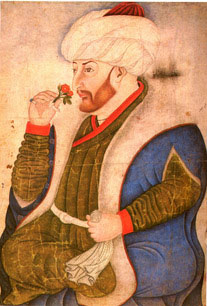 Anyway, after having walked around there under the sun for some time, we entered a nice restaurant (“Karakol”) found on the grounds. There, as a welcoming refreshment, we were served the Sultan’s sherbet – a delicious soft drink largely made up of pomegranate juice and aromatic spices. While the sherbet served even may have been slightly more elaborate (possibly also containing some juice from grapes and/or cherries), I like to think that the following sorbet recipe still manages to convey the essentials behind the delicious drink. 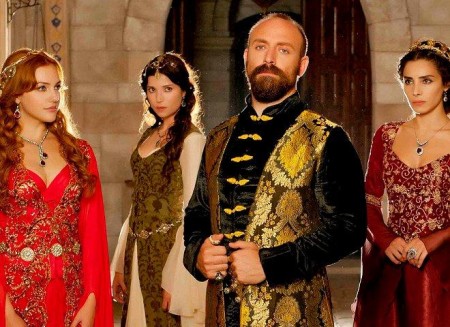 ‘Magnificent Century’ (or ‘Muhteşem Yüzyıl’ in Turkish) is a (regionally) extremely popular Turkish TV-series about another famous sultan – Suleyman the Magnificent, ruler over the Ottoman Empire during its “Golden age”. A lot of the action in the series takes place within the walls of the Topkapi palace.

Pomegranates, as has been mentioned before, have accompanied mankind for thousands of years. The fruit is positively loaded not only with antioxidants but also with symbolism.

According to the Qur’an, the fruit grows in the gardens of Paradise. In Christian traditions, the pomegranate is a symbol for the suffering, resurrection and eternal life of Jesus. In Jewish mysticism, “entering the garden of pomegranates” symbolises the mystical experience. And in several other old cultures (China, India, Ancient Persia), fertility stand out as one of the main values attached to the fruit.

By the way, “Pomegranate” is a word derived from Latin and means “seeded apple”. Due to the structural similarities, the fruit has also had the doubtful honour of inspiring the naming of the military ‘grenade’ – something to contemplate for all friends of Monty Python (remember the Holy Hand-grenade?).

Like sorbets in general, this one is not particularly difficult to make – if you can mix fruit juice with sugar and some spices, you are basically there. While I used store-bought, ready-made pomegranate juice, nothing stops you from starting out with the actual fruits and make the necessary juice yourself.

In such a case, however – given the particular and sturdy characteristics of pomegranate seeds – you may want to consider preparing not only the juice, but the whole sorbet base right from the start [taking advise from an old recipe for sherbets, you could then mix the about equal parts of seed, water and sugar, together with the spices in a saucepan. Bring to a boil, let it all simmer for about 10 minutes and then sieve off the seeds and any residue from the spices. Let cool down and check if the sugar level is OK, possibly adding some more water or some more sugar to the base]. 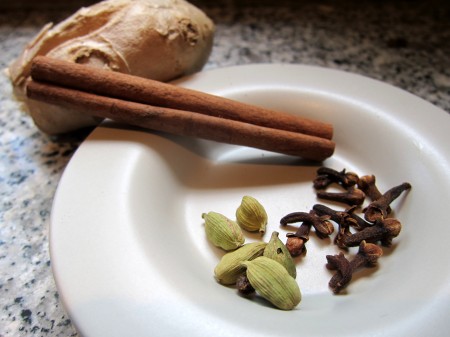 The spices – an essential part of this sorbet, where particularly the ginger ‘defines’ the overall flavour in a very nice way

If you already have your juice, things become even less complicated: Prepare a simple sugar syrup (made up of equal parts water and sugar), and mix this syrup with a corresponding amount of pomegranate juice. Add the spices and a little lemon juice.

Check that the sugar level is OK for a sweet sorbet (using the Egg test, or more sophisticated means), possibly adding more sugar or juice if necessary.

Chill the base in the refrigerator (which also will allow the spices to infuse the base), then sieve off any unwanted spice-residue and churn in your ice cream machine. No ice cream machine?  Then still-freeze using your freezer, according to the helpful instructions on this page. 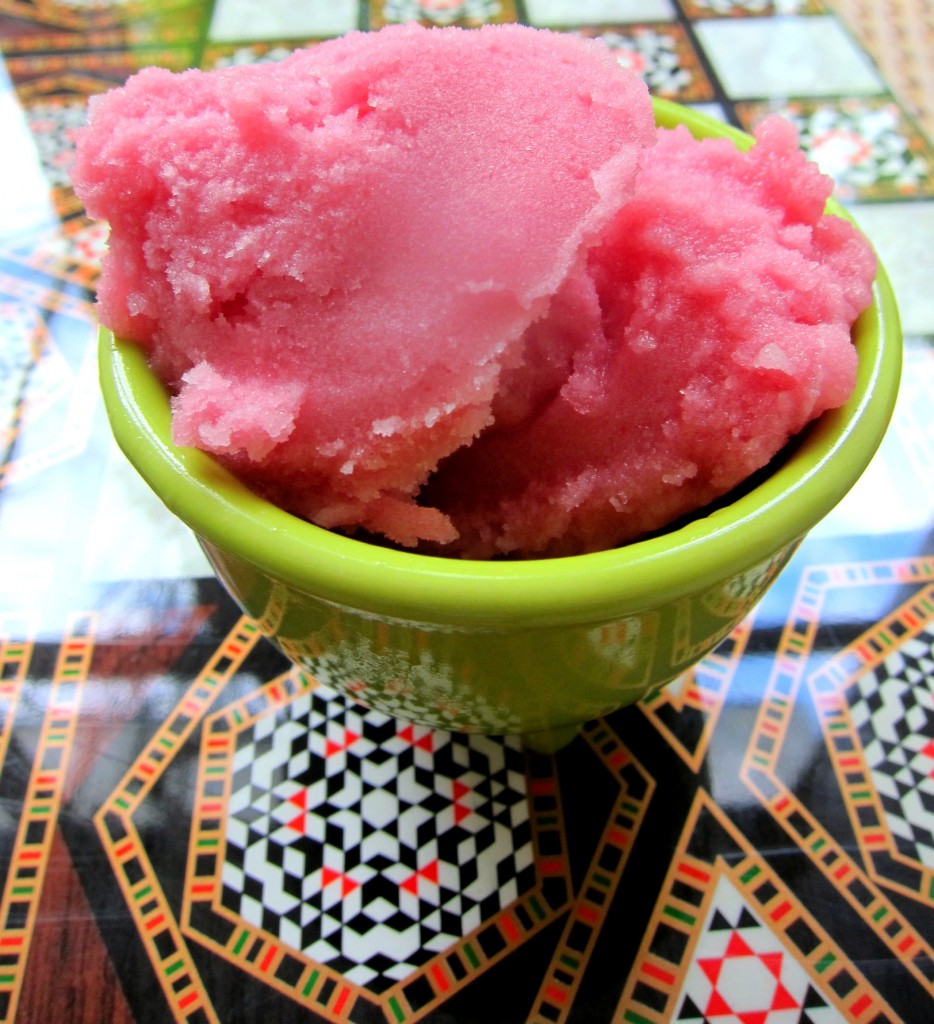 Sultan’s sorbet – not only does it taste well: it has a very nice natural colour too

Sorbets should be refreshing and pleasing, and this one certainly aims to please. The pomegranate juice and the spices combine to form an exotic flavour, where particularly the fresh touch of ginger stands out and prevents the cinnamon and the cardamom from being too intrusive.

You may not have a palace like Topkapı at your disposal but don’t let that stop you from enjoying this regal dessert. After all, the texture and consistency of your sorbet will in all likelihood be better than all the frozen desserts which Sultan Mehmet the Conquerer possibly could have hoped for in his day and age 😉 .

So think about your privileged position, bring out a set of backgammon (“tavla” in Turkish) and challenge someone you like over a scope or two! 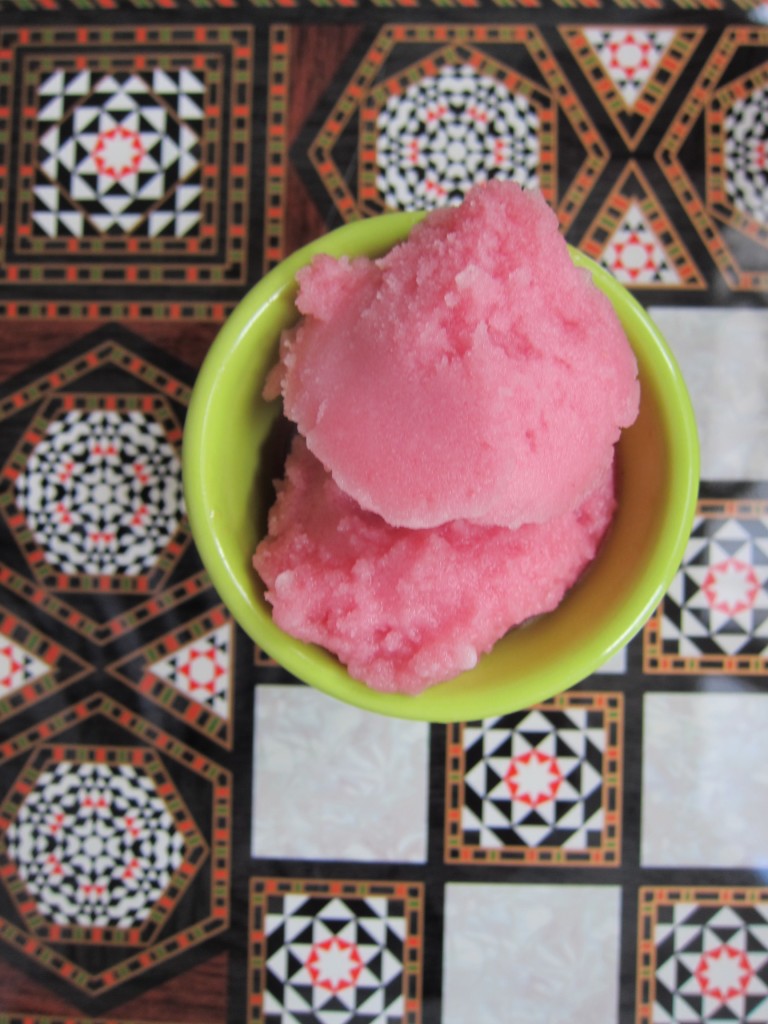