Feeling grumpy or downright evil? Have a Pepparkaka! Eating  gingerbread (at least the Swedish type) is actually supposed to make you kind!

With old German roots (“Lebkuchen”),  the Swedish gingerbread (“Pepparkaka“, literally “Pepper cookie”)  is documented at least  since the 13th century. The traditions of making cookies (and pills) with highly spicy content (believed to have positive effects on health and moods), however, can be traced even  further back in time.  Some sources  claim that certain gingerbread precursors were baked already around 2000 BC in Ancient Egypt.  Related “health pills”, mainly loaded with  flour, honey and Oriental spices, are also known from Ancient Rome.

Leaving the precursors aside, the “gingerbread family” of today has quite a lot of members, mainly spread over continental Europe. The often decorated Belgian (and Dutch) “spéculoos” (or “speculaas”) are rightly famous, for example. And many of these cookies, although now generally available all year round, have also come to be very closely associated with Christmas.

Exactly why gingerbread is supposed to promote kindness remains somewhat of a mystery. There are a number of theories, however.  Most of them start out by concluding that the Oriental spices (ginger and pepper being two, hence the present-day names in Swedish and in English), as well as the potash/baking powder commonly included  in many Medieval recipes, were believed  to be generally good for health and for indigestion.

Since healthy people who do not suffer from constipation can be  expected to remain happier (and therefore also kinder) than sickly ones tormented by indigestion problems, the connection was formed between consumption of gingerbread and well-tempered kindness. And apparently, the belief stuck.

A related historical episode which probably came to reinforce the belief in Scandinavia concerns the Medieval Scandinavian Union King Hans (1455-1513). The king supposedly got prescriptions for gingerbread from his doctor, in order to counter the King’s bad moods. Since the King has gone done in history as a man of rather jolly character, these prescription appear to have worked out quite well!

Despite the ancient roots, most modern-day ginger bread recipes  actually only go back to the 19th century. They have also very little  in common with the spice-laden Medieval recipes that once gave the cookies their name. By the way, did you know that the French term is “Pain d’epice” (spice bread)?

Given their relative lack of overdosed healthy spices, I guess we would have to assume that the eventual kindness that is brought about by gingerbread today is based on the following equation:  “eating nice cookie makes you happy -> if you are happy, you are more likely to remain kind“.

The health-minded would, of course, add that “eating too much nice cookies makes you bloated and unhappy = consume in moderation, in order to remain happy and kind”🙂

I can assure you that this is an ice cream very popular with adults and children alike, and in order to not lose any time, I decided to use the quick American (Philadelphia) technique.  As a refreshing touch, I  added  some yoghurt to the ice cream base. 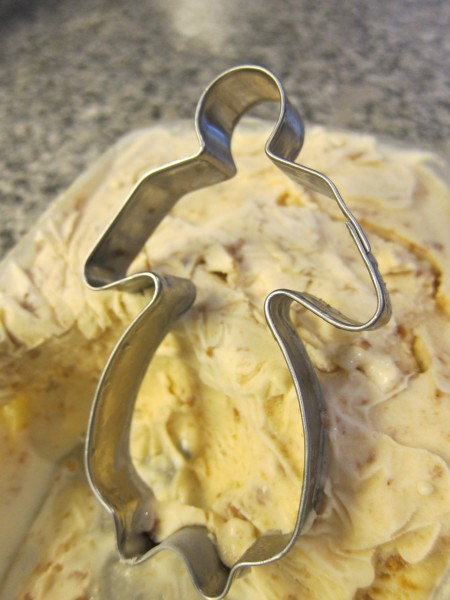 As always, the results gets better the faster the ice cream base freezes – make sure that all ingredients are well chilled before churning. The gingerbread cookies (or ginger biscuits/ginger snaps, as they are called in certain parts of the world) should also chill in the refrigerator for at least an hour or so. Then, put them in a plastic bag and crush them rather thoroughly! 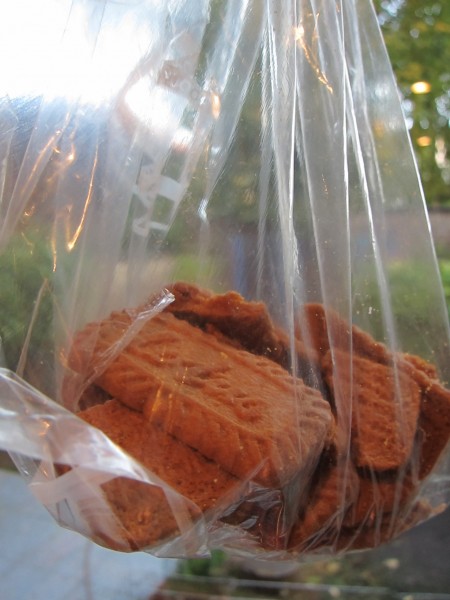 When the ice cream base has churned for a while, and the consistency equals “soft serve” or somewhat firmer, add the crushed gingerbreads. As with all solid add-ins, the cookies will otherwise tend to sink to the bottom of the ice cream base. 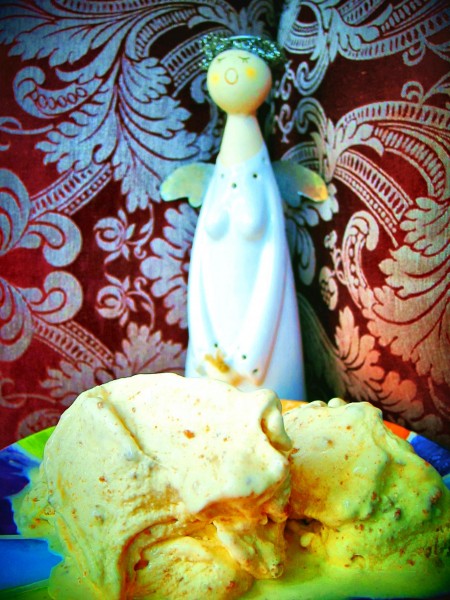 Mmmm … the  final ice cream! As I mentioned, this is a real favourite and highly appreciated by young and old(er) alike! As with all ice creams, you can let it firm up in the freezer for a couple of hours or so before serving. In our household, however, a batch rarely lasts very long after churning:)

Print
Gingerbread ice cream
Ingredients
Instructions
Notes
The usual advise concerning raw eggs apply - avoid serving ice cream with raw eggs to pregnant women, toddlers and frail elderly. If you are concerned about using raw eggs (and do not have the opportunity to use pasteurised fresh ones, which sometimes can be found depending on where you live), the eggs could be omitted - particularly if the ice cream is to be eaten immediately, or at least very soon after churning, the recipe should still work out quite nicely.
Wordpress Recipe Plugin by EasyRecipe
2.1.7
Share