The blueberry is probably my favourite berry: extra nice these days, when the blue berries are hailed not only as delicious, but also super-healthy. Since I also love frozen yoghurt, you can imagine my happiness when I found an easy way to make great blueberry frozen yoghurt in less than 30 minutes. The secret? Mainly a jar of good quality blueberry jam. Read on!

Frozen yoghurts made with little or not fat can be difficult to pull off at home. How to improve frozen yoghurts is being dealt with in another post but, in simplified and short summary, ‘plain’ yoghurt on its own does not freeze very pleasantly. 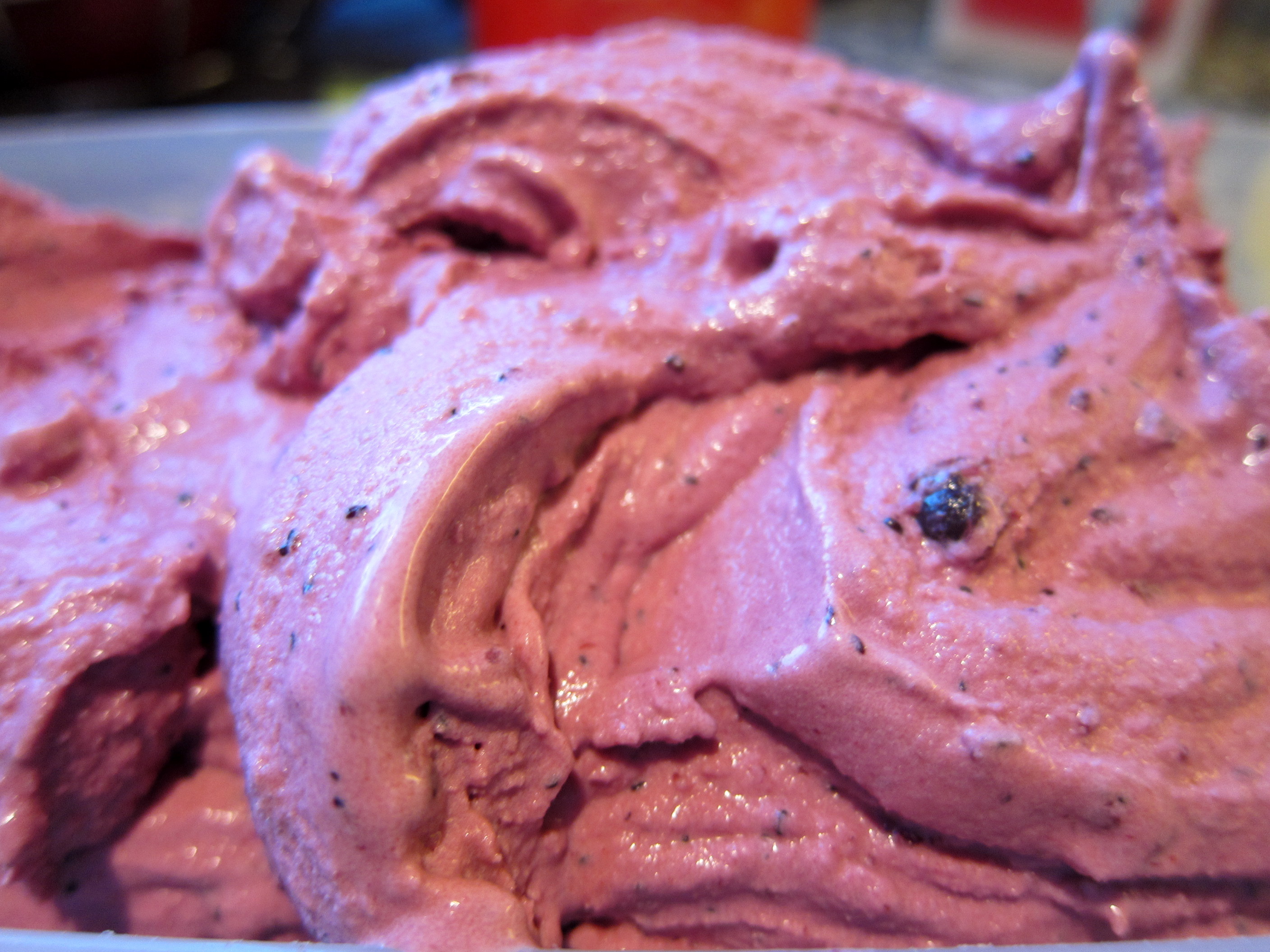 This easy blueberry frozen yoghurt is pleasant in all its aspects (here, deliciously fresh, soft and ‘wavy’ just after the churning).

I usually prefer to use fresh fruits whenever I can when preparing ice cream, but good quality jam can actually be a pretty good and useful option!

If you are OK with the somewhat “cooked” jam flavour, there are even some advantages when it comes to the build up of ice cream/frozen yoghurt.

Jam is basically fruit purée cooked with sugar, the vegetable gelling agent pectin (also naturally present in many berries and fruits) and often some citric acid. All of these ingredients could well be part of a “normal” ice cream recipe (although, at home, the citric acid would typically come in the form of lemon juice). Through the cooking of the jam (and the pectin), there will also be relatively less ‘free-roaming’ water in a jam, compared to fresh fruits – a clear advantage when it comes to preventing the growth of unpleasantly large ice crystals in an ice cream.

Still, ice creams and frozen yoghurts only become as good as their ingredients – stick to using high-quality jam with a high fruit-content and as little other additives (save for the necessary sugar, pectin and some citric acid) as possible. And remember to take the sugar content of the jam into consideration when measuring the overall sugar amount!

30 minutes to Blueberry heaven – how to do it

The recipe is marked by great simplicity. Along similar lines as Philadelphia-style ice creams, all ingredients are basically just  straight from the refrigerator whisked togetherand then churned. But there is some thinking behind the simplicity – the recipe utilizes several of the ways to improve frozen yoghurt:

For jam, I used a good-quality blueberry one with a fruit content of staggering 70 %. The rest was, roughly speaking, sugar, some pectin and a little citric acid.

For sugar, I used confectioner’s sugar to ensure that the sugar would disperse quickly in the yoghurt base. Mainly in order to further improve the consistency, I also added a couple of tablespoons of inverted sugar (agave nectar, but other neutral types such as corn syrup should also work). Since the sugar content of jams tend to vary, you also need to take account of this when calculating the exact amount of total sugar that should go into the frozen yoghurt.

A note on all the different types of dairy used

“Turkish yoghurt, sour cream, cream, quark” … looking at all those ingredients, you may be excused for wondering if I have held up a dairy shop. And I admit that I got a little carried away when mixing this recipe. But luckily, you could well make a simplified version, for instance by adding only one type of dairy to the yoghurt instead of my three.

The dense yoghurt remains essential. I chose Turkish-style yoghurt, since it tends to be slightly more tangy than the Greek type. Both (or similar) types should, however, work fine. The important thing is the density (you could also take plain ‘normal’ yoghurt and strain it yourself) and a certain elevated percentage of fat.

Adding to that, you may well opt for only cream (good for fat, softens the overall flavour), or only sour cream (equally fat as cream but with tangy flavour). Quark [farmer’s cheese] does not bring much fat but has a relatively high density and neutral flavour. I took some on board to complement the overall structure (increasing the milk solids). In case you want less overall fat, you may want to experiment with increasing the amount of quark. Or you may just stick with yoghurt throughout.

Once the frozen yoghurt has been churned, you can enjoy it straight away! 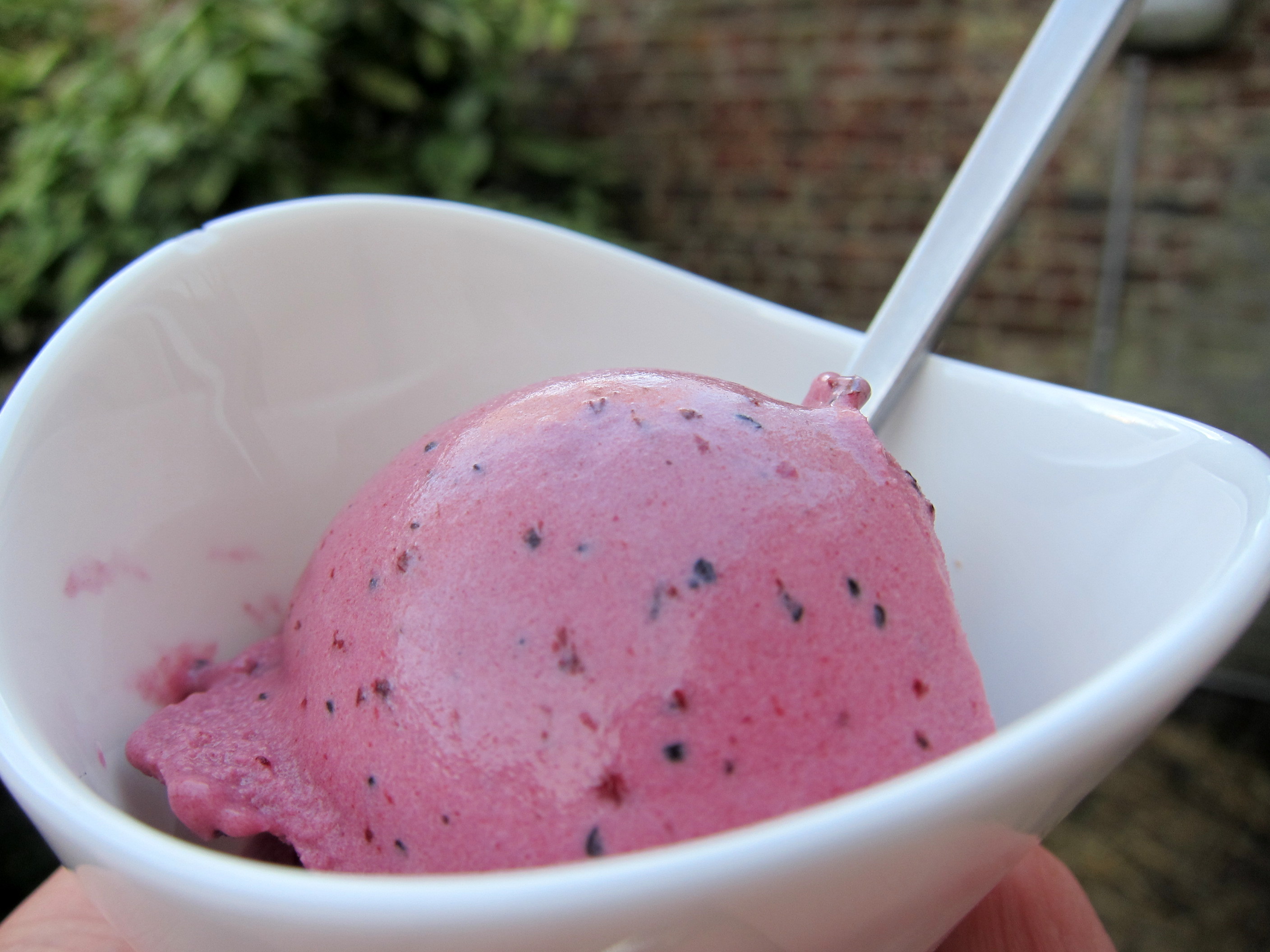 But you can also store it for later without problems. Like for any ice cream, put it in a freezer-safe container and cover with plastic film and a lid. Once in the freezer, the frozen yoghurt will freeze firmer but will maintain a pleasant (= ice cream-like) consistency.

As for most home-made ice creams, however, it won’t hurt to take it out from the freezer 5-10 minutes before serving and letting it soften a little (after all, your freezer is much colder than most freezers in a typical ice cream parlour, so it is no wonder that home-made ice creams generally tend to freeze somewhat harder). 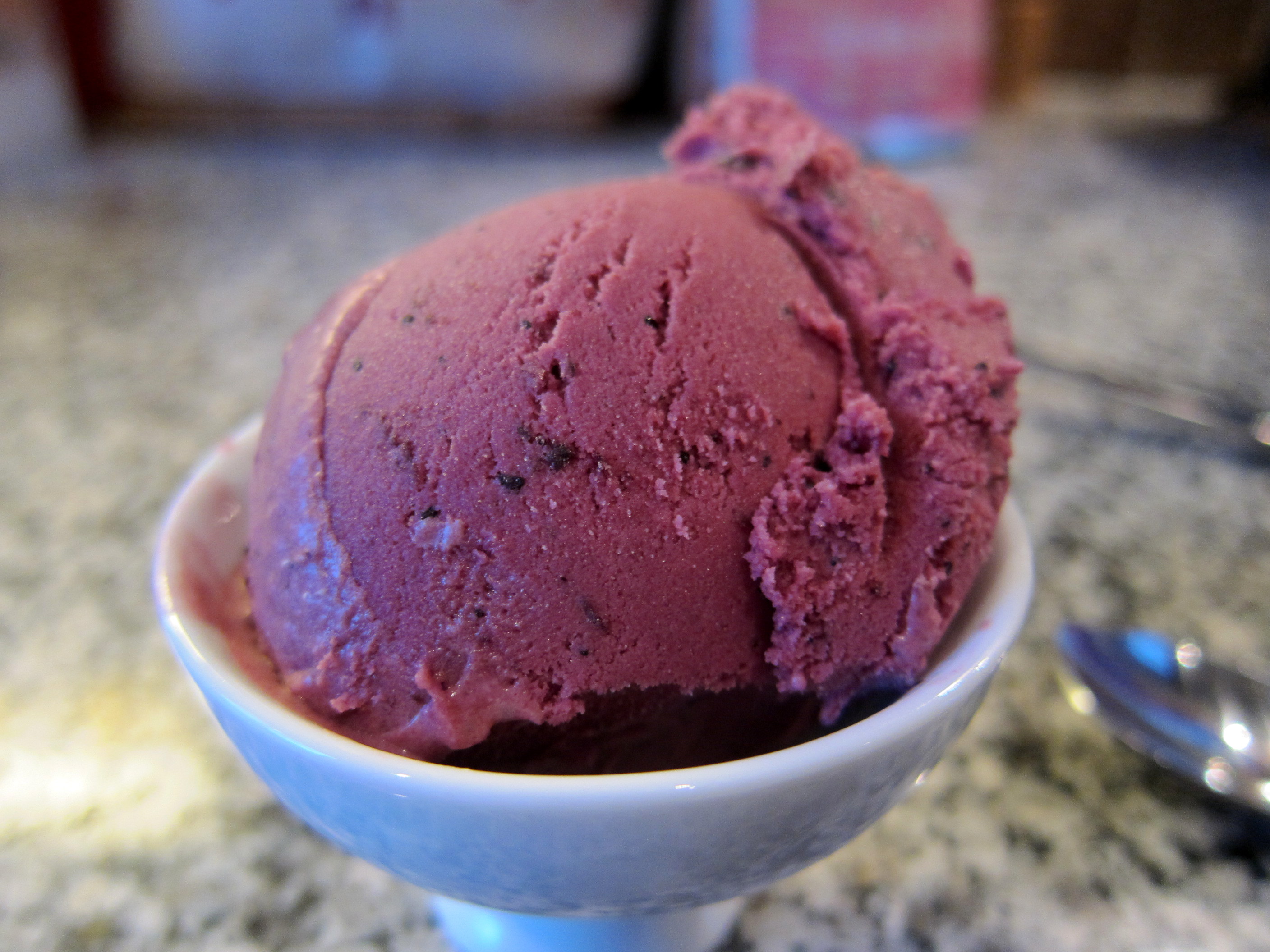 Deceptively easy to make, this tasty frozen yoghurt has quickly become one of my personal favourites.

The flavour is pleasantly tangy, sweet and generally blueberry heaven-like. But its consistency is also great, even after prolonged storage in the freezer. “Prolonged storage” might, however, not be much of a concern … even when I try to show restraint, a batch of this lovely blueberry creation seldom lasts more than a couple of days in our house.

Your ticket to Blueberry heaven? – Just a jar of good-quality jam and some strained yoghurt. There is really no reason to wait!

Print
Blueberry frozen yoghurt (with jam)
By: Anders@icecreamnation.org
A personal favourite! Delicious, fresh, smooth and rich blueberry frozen yoghurt - stores well in the freezer and (with ice cream machine) should only take about 30 minutes to make!
Ingredients
Instructions
Notes
If you want to simplify the ingredients-list, you could experiment by using ONLY cream OR sour cream OR quark with the yoghurt (or by using only yoghurt, for that matter). Excluding both cream and sour cream, however, will mean an overall drop in fat, which will affect the final consistency, texture and mouthfeel of the frozen yoghurt (you may still like it, though)
Wordpress Recipe Plugin by EasyRecipe
3.2.1284 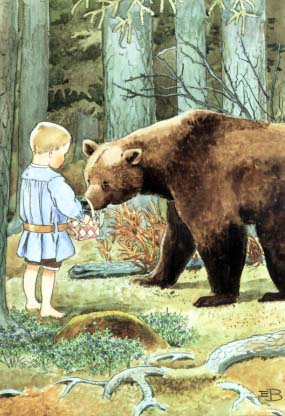 Unlike classic Swedish children’s song-favourites Little Olle and the bear who had to stick to blueberries naturelle, you may easily enjoy blueberry frozen yoghurt!