Saffron – the world’s most expensive spice – teams up with orange in this delicate ice cream, which exceeds the sum of its parts!  Some would say that this mix of flavours goes back to the Middle Ages, and the vibrant cultural diversity brought about by the rule of the Moors in the south of Europe. But while the flavour roots may be old, the preparation of the ice cream custard base will be modern – doing away with the traditional “tempering of the eggs”-stage, and thereby simplifying the cooking quite a lot.

Saffron and orange has been described as a “Moorish” flavour combination, popular in certain sauces to this very day. But as you may know, some believe that the Moorish presence in Southern Europe might have been the principal gateway for more Eastern thoughts on how to prepare early types of ice cream: knowledge which rooted and matured further in Italy and ultimately would give birth to ice cream as we know it – more or less – today. With this in mind, I was more interested in how saffron and orange would turn out if combined in an ice cream! 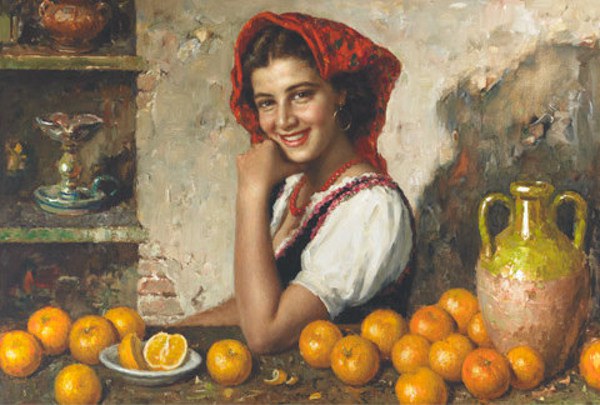 Saffron and orange is most certainly an exotic combination, possibly dating back to the times when the Moors ruled parts of Southern Europe

While I would assume that this recipe also could work “Philadelphia-style” (particularly if you slightly whisk the cream before blending all ingredients together and possibly use some more cream, rather than milk), I decided to go for a custard. Probably because I feel that saffron somehow deserves a bit more finesse.

Still, this time I sided with the modernists and skipped the “tempering phase”: I simply added all the ingredients (except for the orange juice) including the egg yolks, whisked them together and began heating it all. 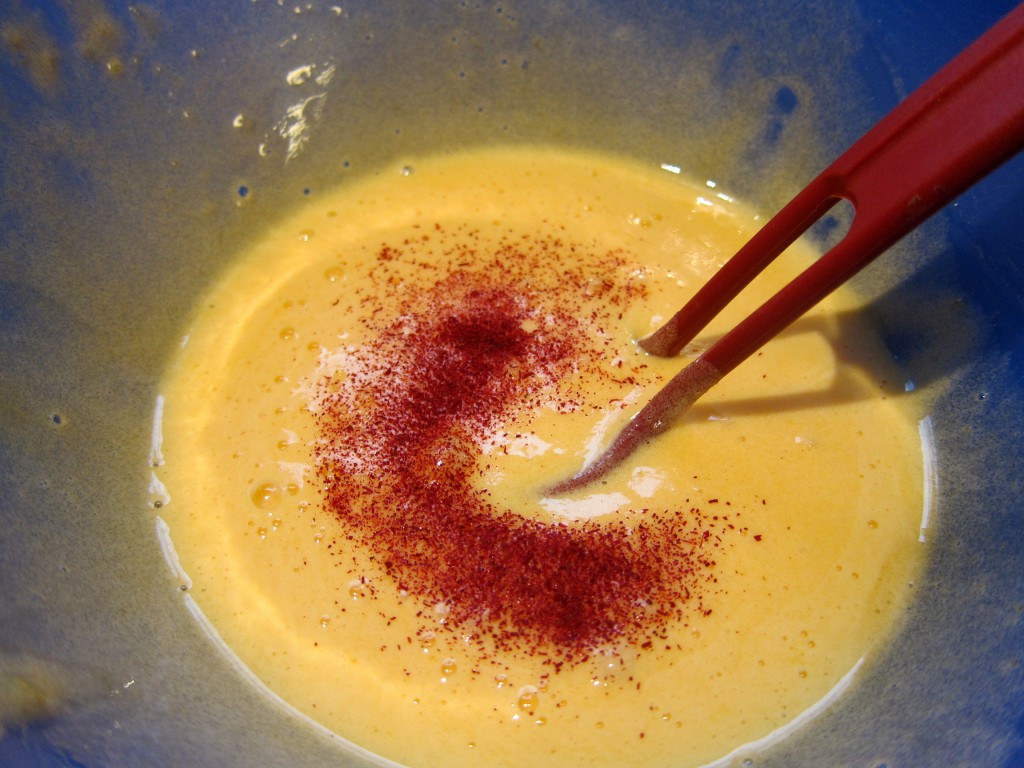 I began by whisking together the egg yolks, the sugar and the saffron. But you may well just combine everything (except for the juice) and whisk away (my “step by step-whisking” was actually done only to better let me enjoy the sight of the various ingredients coming together 😉 ) 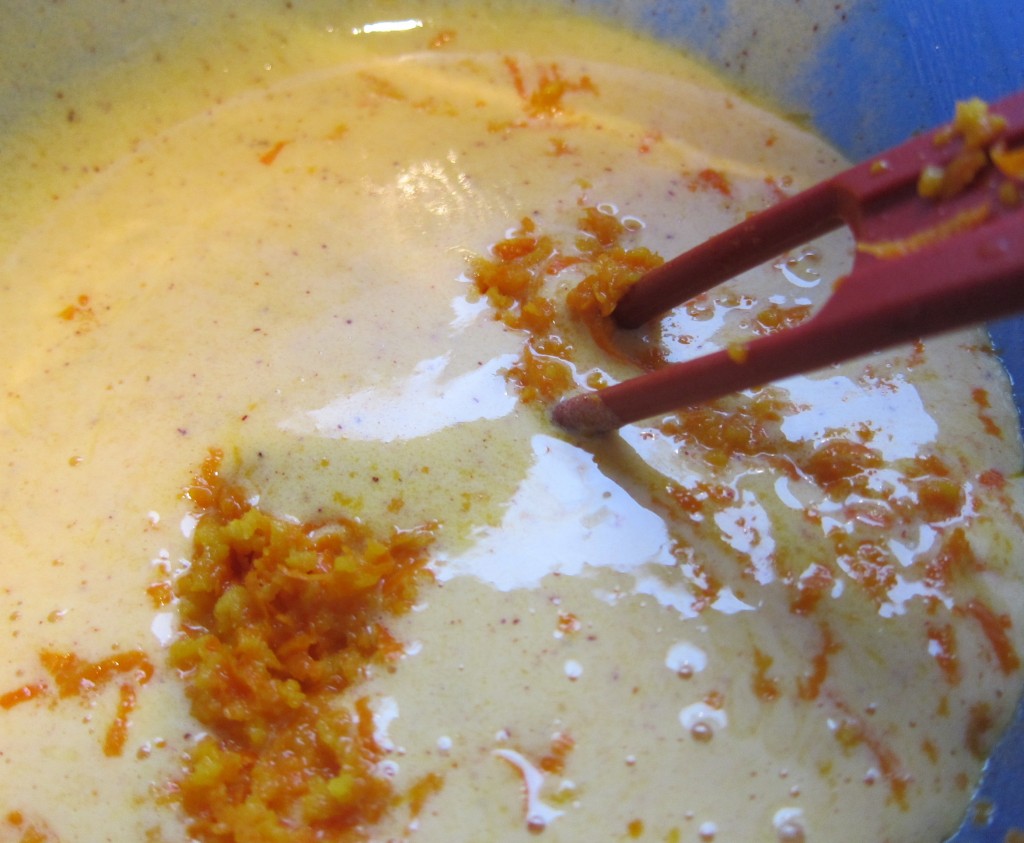 Adding the grated orange peel to the ice cream base

Continue to whisk the base, until it has reached the so-called “nappe stage“ (in the range of  about 82-85º Celsius/179-185º F). Some would settle already for about 77-82º C/170-179º F: structurally, the base will be fine either way so the question here is more a one of health hazards – how thoroughly do you want to pasteurise your ice cream base? 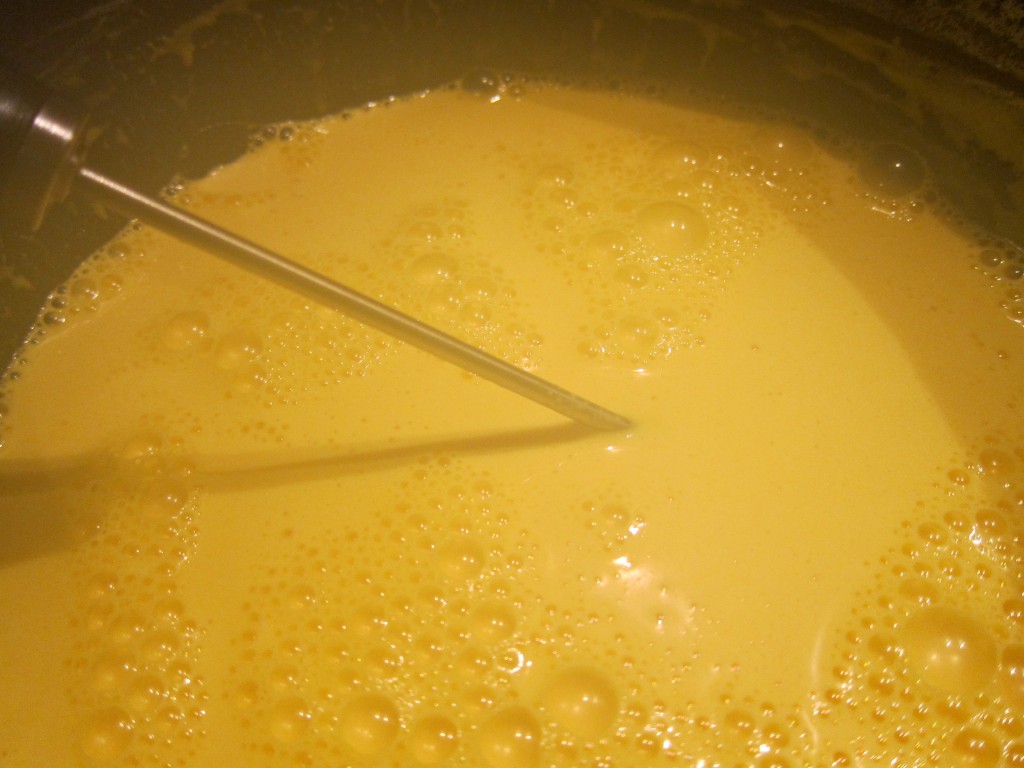 For maximum certainly, use a thermometer to check if the nappe stage has been reached!

Once at the nappe stage, take the custard base off the heat to cool, and – ultimately – chill. And the orange juice?  In line with my ambition to avoid cooking the juice itself and preserve its natural freshness, I only added this essential part of the recipe to the custard base once it had begun to cool down somewhat. 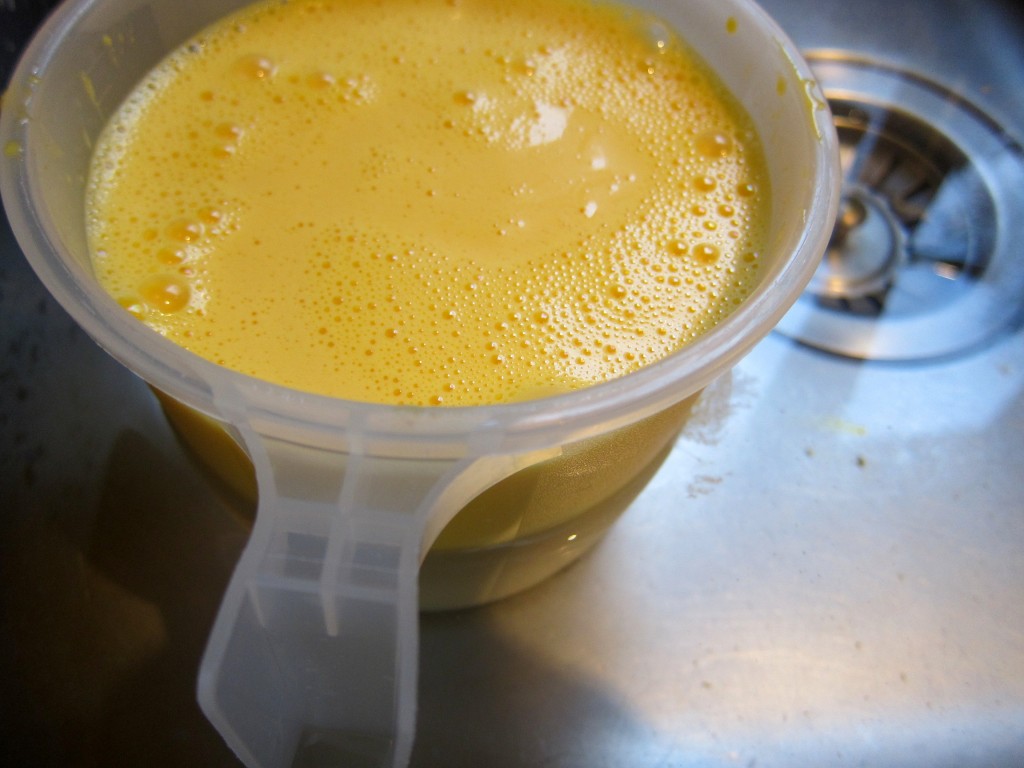 With or without ice cubes, I find that chilling the ice cream base in a sink filled with cold water is quite effective 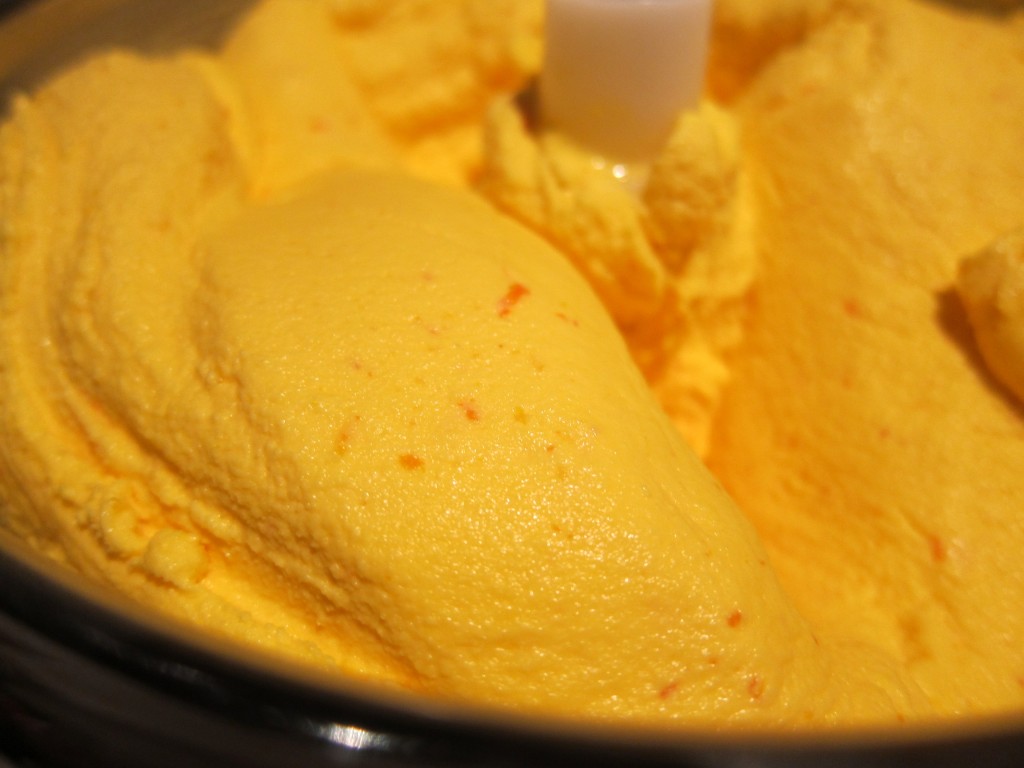 The saffron-orange ice cream being churned. Notice the small grated pieces of orange peel, adding both flavour, a little texture and visual appeal 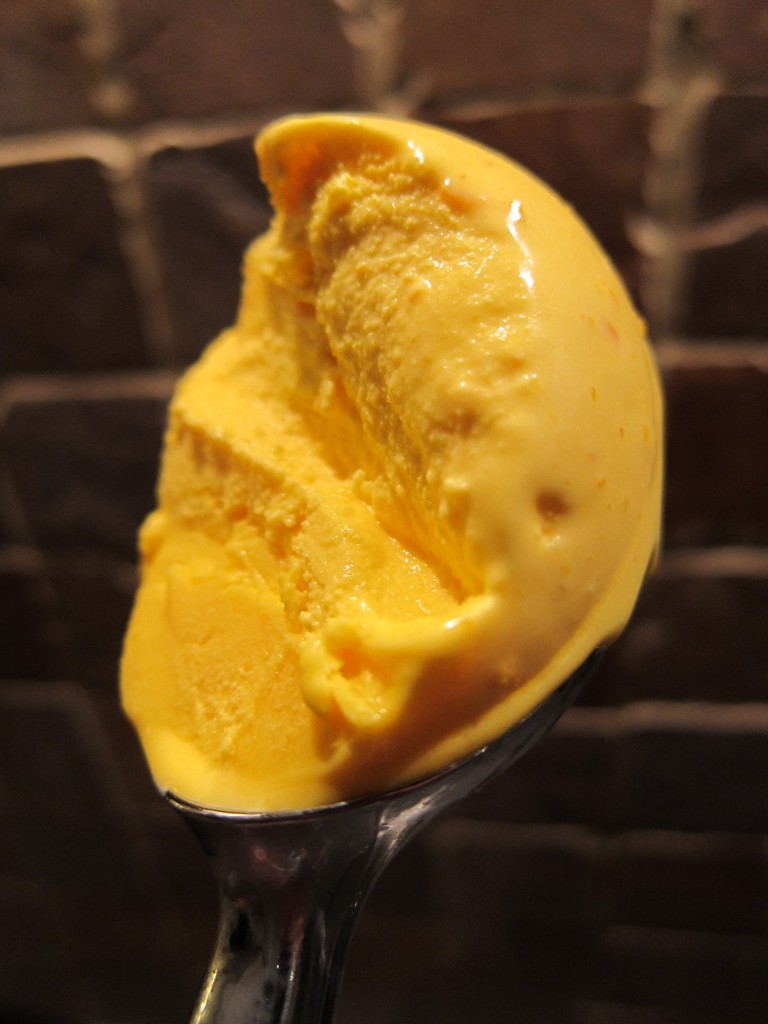 Delicious! And visually also very pleasing, thanks to the golden yellow of the saffron, discretely speckled with the grated orange rind.

And what about the flavour? While it is quite difficult to properly convey flavour-sensations in writing, saffron and orange clearly do form a very harmonious pair – the combined result is neither orange, nor saffron but more reminiscent of some strange, wonderous fruit: obviously with tones found in orange and in saffron, but still a kind of “flavour of its own” rather than a simple cumulation of the two. The consistency and texture of the ice cream is also nice, and I had great difficulties not to finish the whole batch on my own right after churning.

4.5 from 2 reviews
Print
Saffron Orange ice cream
By: Anders@icecreamnation.org
Saffron and orange is a delicious flavour combination that somehow joins the two parts into a special combination-flavour of its own! The custard base used provides a worthy frame, with great consistency and texture.
Ingredients
Instructions
Notes
This recipe applies the "modern" custard-making method where basically all ingredients are mixed together from the start, thus skipping the more traditional "tempering the eggs"-phase found in many recipes. Both methods work, but the modern approach obviously simplifies the process. If you are worried about lumps, make sure to whisk well during the cooking and - to be extra sure - pass the finished result through a sieve.
Wordpress Recipe Plugin by EasyRecipe
3.2.1275
Share