What’s the result if you combine orange and lemon? And then add some yoghurt? And finally decide to freeze it all?  “- A perfect summer dream”, according to a friend of mine who recently tried this (low-calorie) frozen creation. Let’s find out more! 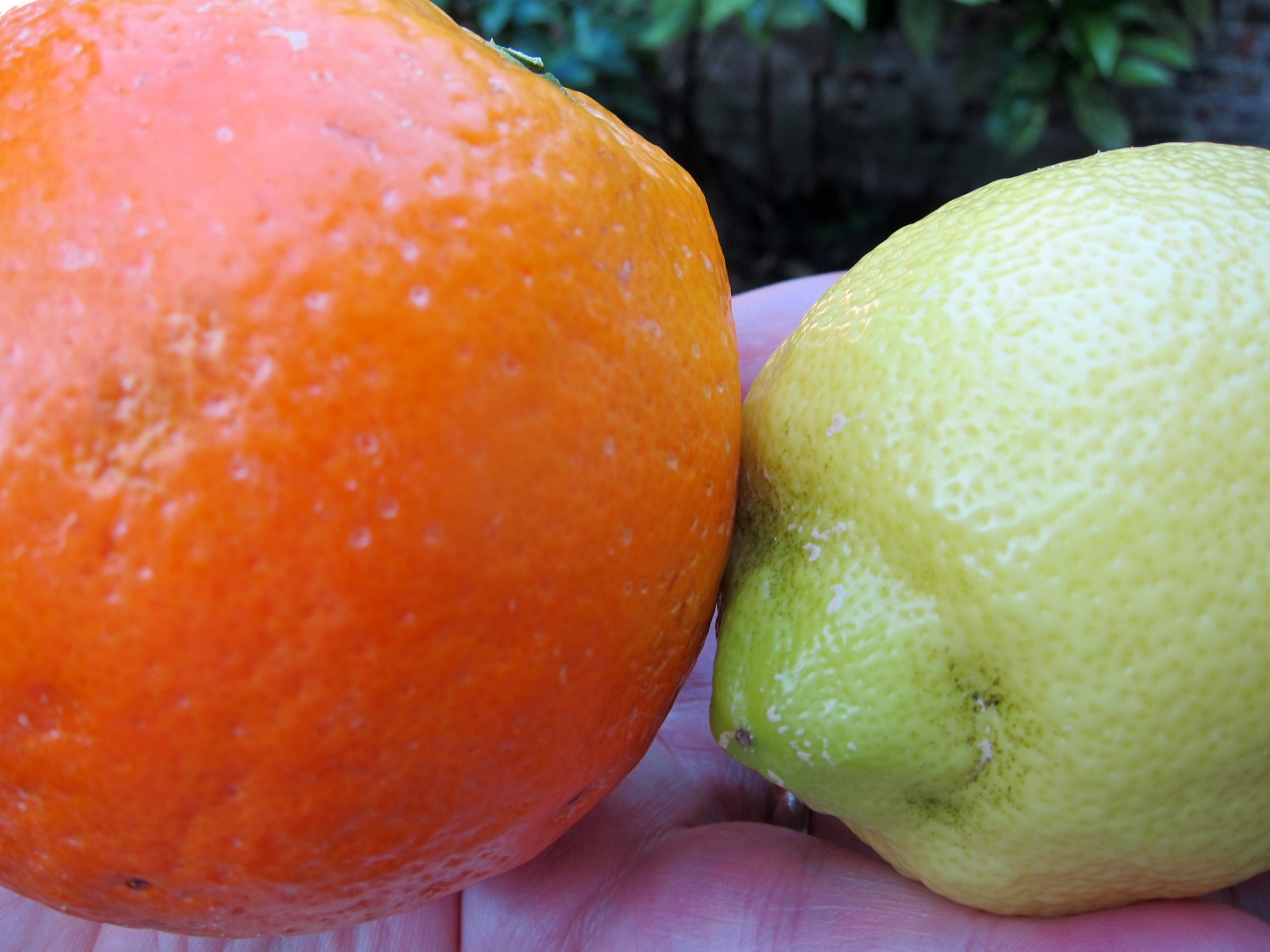 Related but still so different in flavour: Both the sweet orange and the sour lemon are members of the wider Citrus-fruit family.

I really have a soft spot for frozen yoghurt. Could it be that they often feel healthier and less fatty than many typical, creamy ice creams? Or is it the pleasant tangy touch which they add to the other flavours involved?

Flipping through a Swedish cookbook over at some good friends’ about a year ago (“Vårt svenska matarv. En kärleksförklaring” [Our Swedish culinary heritage. A declaration of love], now out of print and difficult to obtain), I found an interesting recipe for lemon yoghurt ice cream. It looked deceptively simple and was built in a way that reminded me of sorbets (= combining the yoghurt with a simple sugar syrup).  Would that really work out? I had my doubts. But since the man behind the recipe was the well-renowned, internationally merited Swedish chef Robert Nilsson, I decided to go ahead and give it a try – not least because I was curious to find out whether combining lemon and orange actually would lead to something interesting. And it certainly did!

On Frozen yoghurts in general

Getting the consistency of frozen yoghurts right can be a bit of a problem. Have you ever tried to simply freeze some yoghurt (or milk, for that matter) in the freezer? Then you know that the result tends to be an unappetizing, icy chunk of hard-frozen dairy. We certainly want to avoid that!

Personally, I like to use ‘ordinary’ plain yoghurt and have had the best consistency-results when mixing such yoghurt with some cream (such as in my favourite Raspberry yoghurt ice cream). Others tend to stick with the more dense (and usually fatter) Greek-style yoghurt. Straining ‘normal’ yoghurt is another way of making the yoghurt denser by removing some of its water. Commercial frozen yoghurts, on the other hand, often come so loaded with industrial-style stabilisers, emulsifiers and flavours that it might be debatable how much really remains of the “yoghurt”.  In fact, many persons used only to commercial frozen yoghurts might even be put off by the actual yoghurt-flavour that characterises the more ‘natural’ products.

Which leads us to another question:  Is frozen yoghurt really healthier than ordinary ice cream?

Frozen yoghurts typically contains much less fat than ordinary cream-based ice creams. But since cream [or rather, the fat in cream] helps to build consistency and body in ice creams, frozen yoghurts often need other ingredients to keep them ice cream-like. As noted, commercial frozen yoghurts often accomplish this by adding a cocktail of ‘industrial’ stabilisers and emulsifiers. Another way of ensuring a scoopable consistency (leaving aside the direct addition of gelatine or cream into the yoghurt) is to add a lot of sugar (both of the normal and the inverted type).

So, in short: while frozen yoghurt may be healthier, it all depends on the other ingredients. The calorie-conscious should at least check whether a lower level of fat possibly is balanced with a hefty increase in sugar(s). Today’s recipe, in my mind, strikes an acceptable balance – there is very little fat and the – somewhat elevated – amount of sugar is not over the top.

So much for general observations. Now, let’s move on to the recipe!

Preparing the yoghurt base

The preparations are all very straightforward and simple.

Begin by preparing a simple sugar syrup, combining water, sugar and the inverted sugar. If necessary (= in case you prefer to heat the water when dissolving the sugar), let the sugar syrup cool down. Grate the zests and collect the fruit juices of the orange and of the lemon. Add these into the sugar syrup. 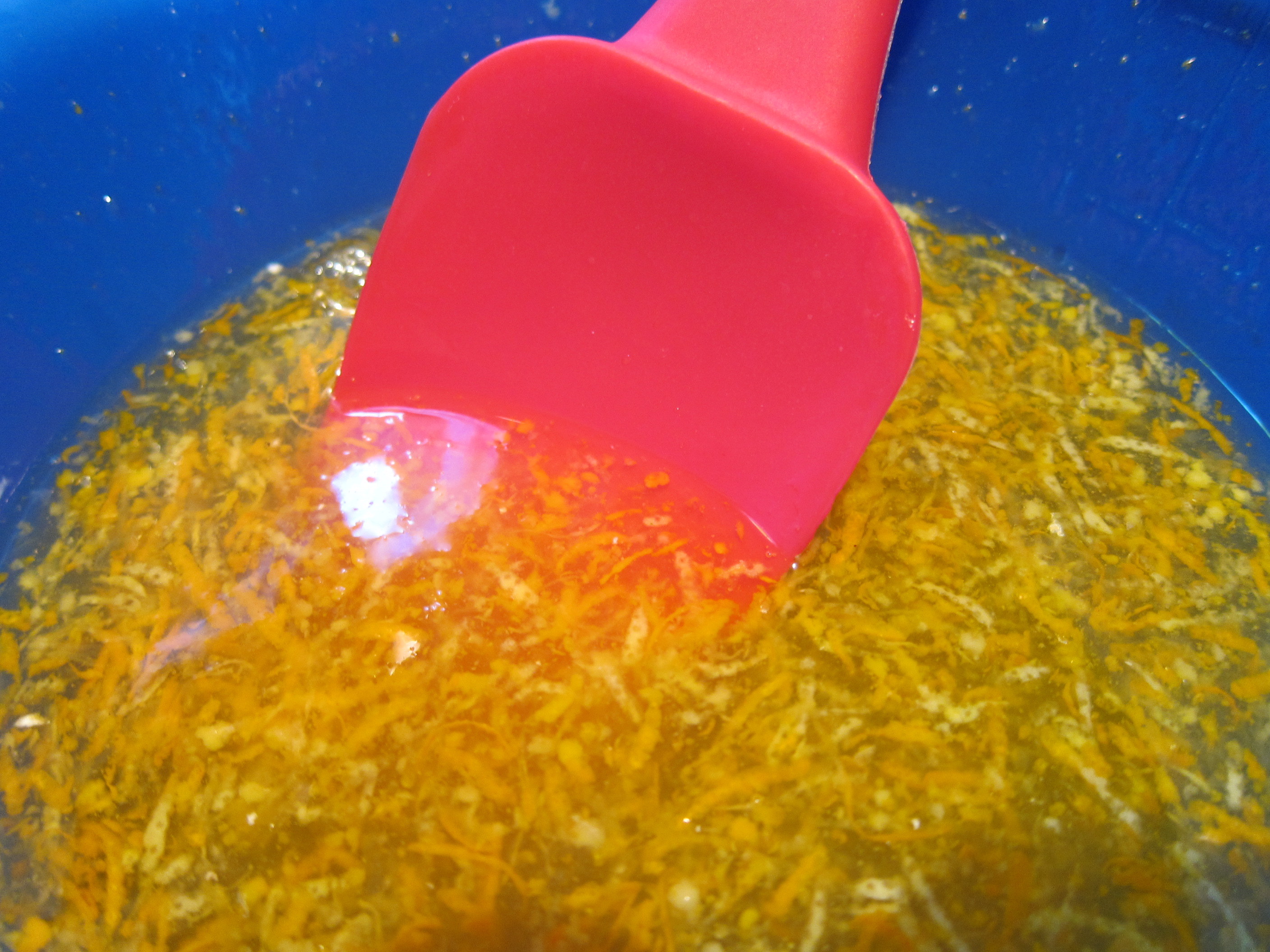 The grated peel does not only add to the flavour. It also contributes nicely as a visually stylish add-in.

Now, blend the (cold) sugar syrup with the yoghurt. 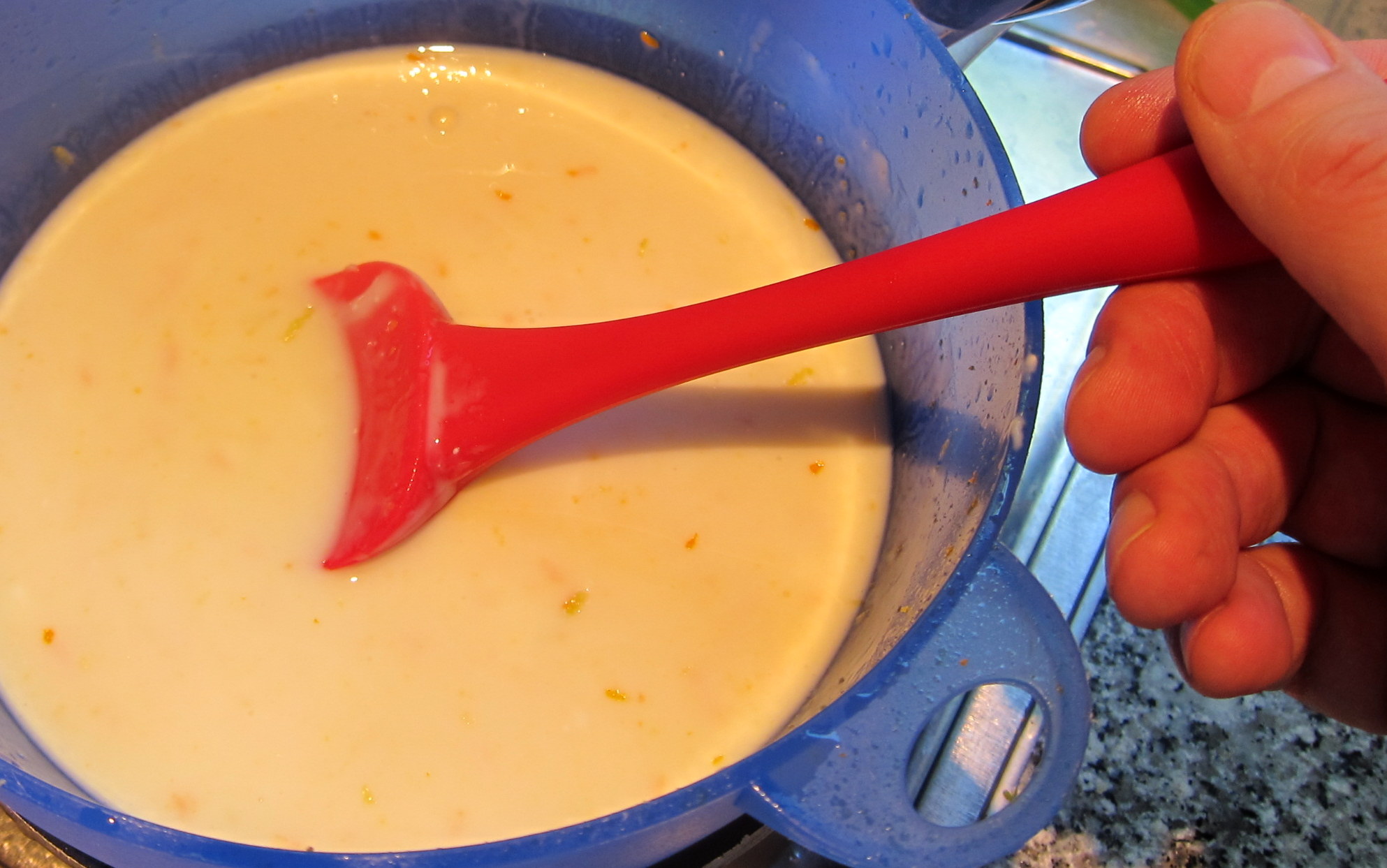 All the ingredients have been combined. Now, all that remains is to churn the base. 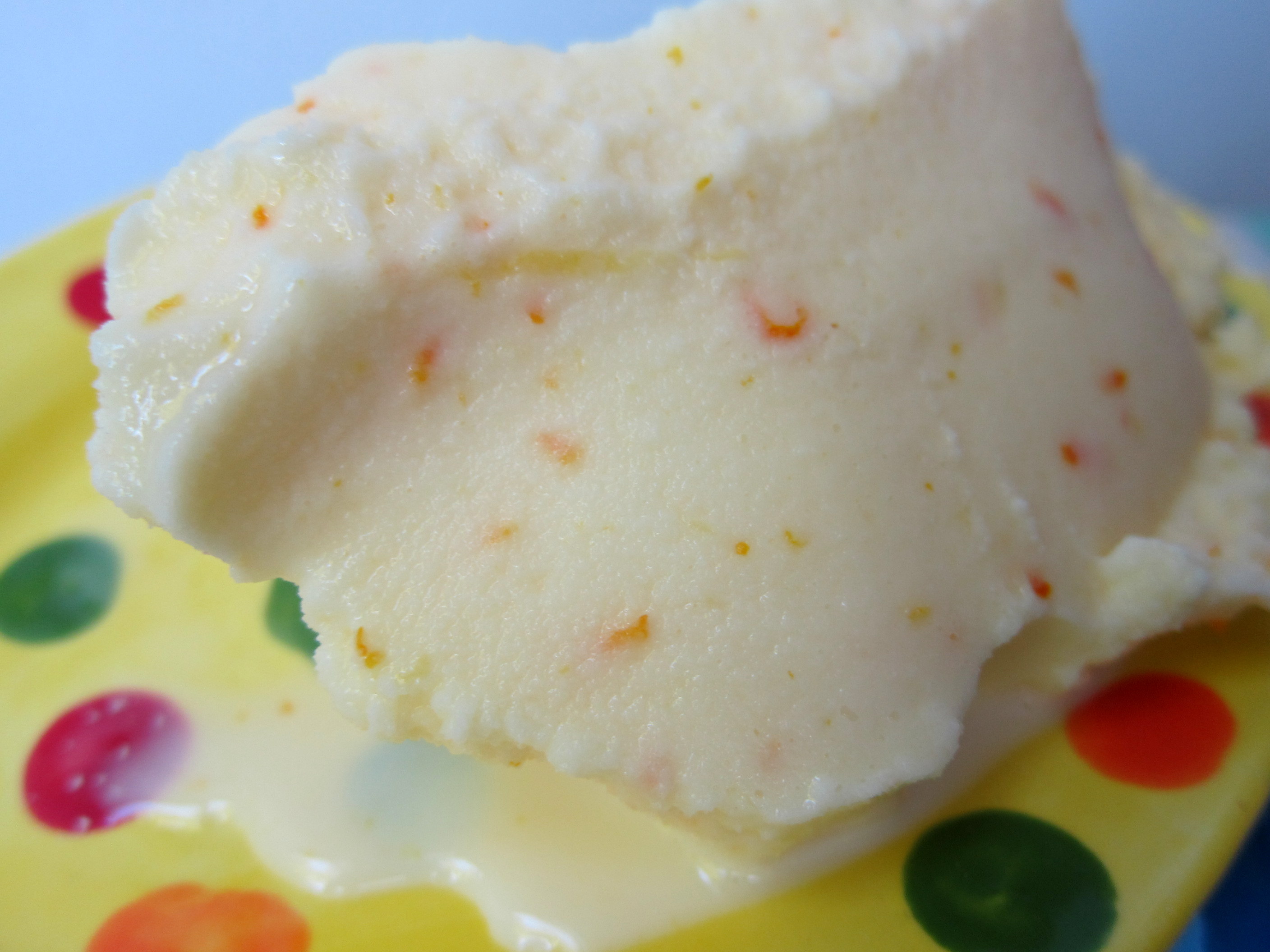 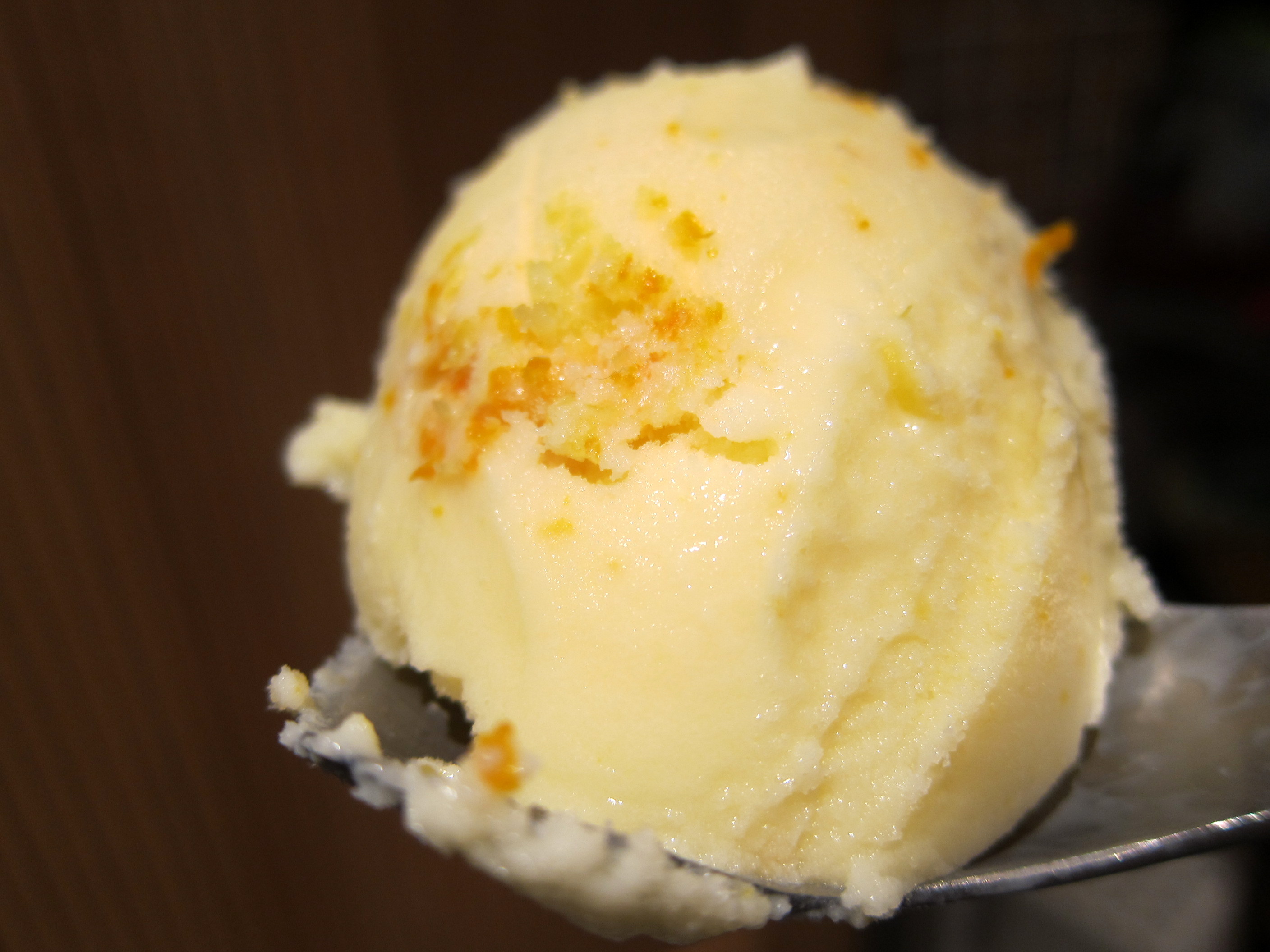 This recipe is a great example of what some sugar can accomplish for the structure and consistency of frozen desserts. Despite the high proportion of ‘standard’ yoghurt and low-fat character, the body of the frozen yoghurt remained scoopable, smooth and inviting. And while this frozen creation admittedly contains more sugar than a typical ice cream the dosage is certainly not over the top. Nor does the flavour suffer from any ‘sweetness overdose’ (partly assured also by the citrus flavours involved).

Overall, the frozen yoghurt was light and refreshing, just like a nice, comforting summer breeze. As already mentioned, a friend of mine poetically likened it to ‘a perfect summer dream’. What better epithet could a frozen yoghurt ever ask for?

Print
Frozen lemon yoghurt ice cream
By: Anders@icecreamnation.org
Slightly adapted after a recipe by renowned Swedish chef Robert Nilsson - a pleasantly tangy frozen yoghurt with a summery, light and almost sherbet-like character. Or, as one of my friends put it: "A perfect summer dream".
Ingredients
Instructions
Wordpress Recipe Plugin by EasyRecipe
3.2.1251 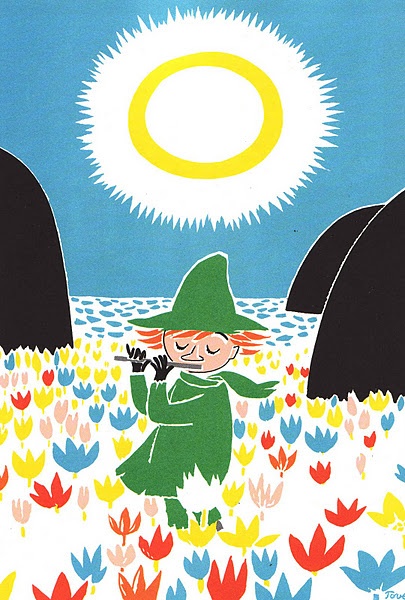 Talking about summer dreams, few illustrations so manages to convey the feeling of Nordic summer as this one by Tove Jansson, creator of the Moomin characters