Familiar with Cthulhu and the twisted pantheon of unspeakable gods and creatures conjured up by cult horror writer H P Lovecraft?  If not, don’t worry – in order to enjoy this ice cream you don’t have to. But it does help to be young at heart and appreciate how much fun certain types of horrors can be if only you’re in the right mood! 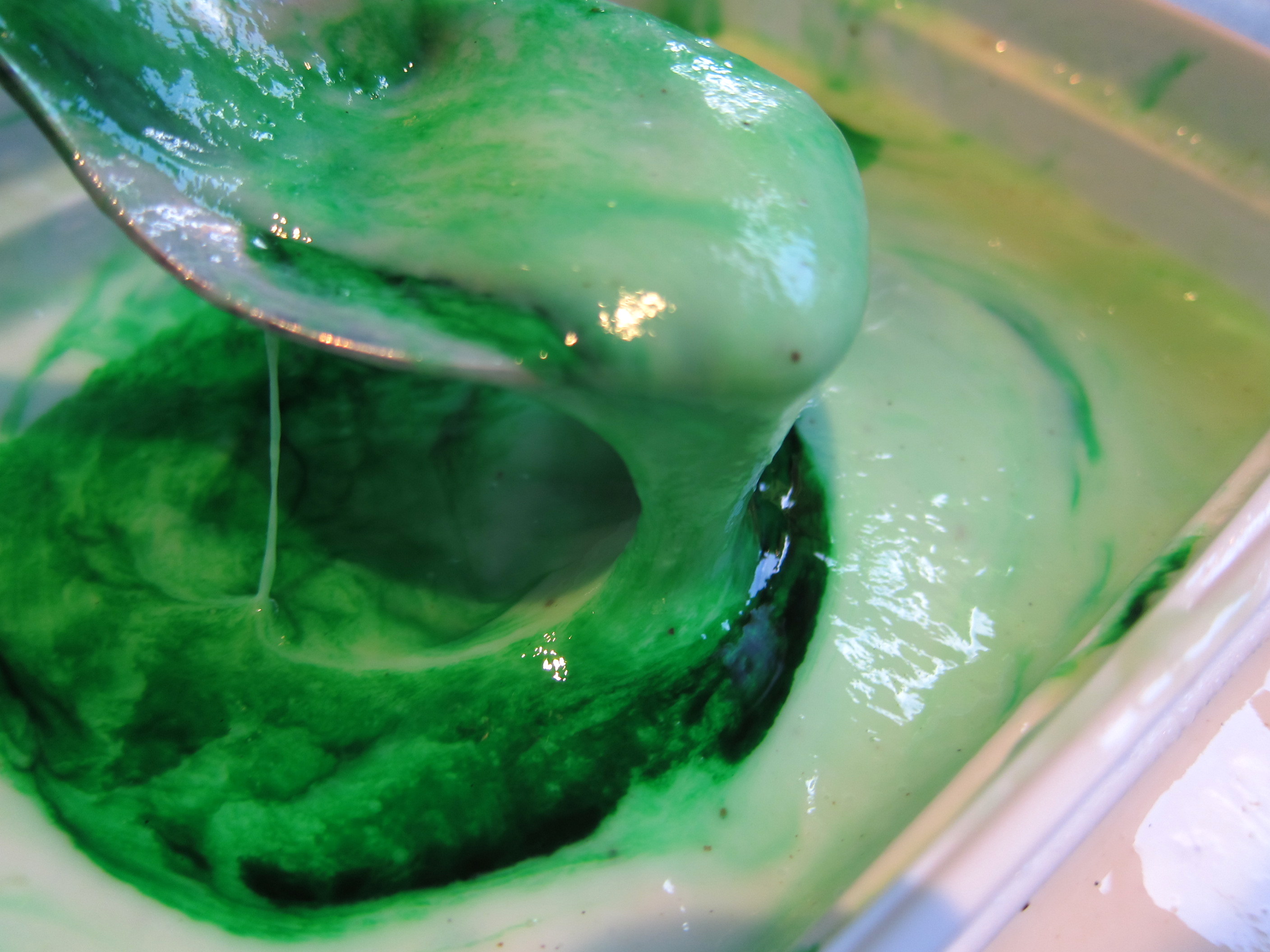 Who goes there? Or slithers, perhaps?

When one of my daughters some time ago asked me to make some “green ice cream” for her class in school, I quickly made an association to a Shoggoth.

Not familiar with Shoggoths? Well, according to the initiated you should probably thank your lucky star, since Shoggoths are huge hideous monstrosities. They come straight out of the so-called Cthulhu mythology, created by the horror writer H P Lovecraft, and just looking at a Shoggoth is likely to result in massive sanity loss. Luckily, however, today’s ice cream did not bring about any particular insanity 😉 .

I tend to be one of those who usually promote ‘natural’ ice creams. And while I firmly believe that ingredients for good ice cream preferably should be “closer to the farm than to the factory”, there are some occasions that simply call for artificial food colouring. One day, I still intend to test whether ice cream could be coloured green with the help of spinach, but I feared that such experiments may not go down too well with my daughter and her schoolmates. So – green food colouring it was!

And the particular base? Sicilian gelato, made with my new favourite starch Arrowroot -the particular slimy consistency which the not-so-frozen ice cream takes on proved to be excellent for monstrous ice cream creations!

Extremely easy to make (even without an ice cream machine!) and quite low-calorie too, all this ice cream requires is the following:

Whisk and dilute the Arrowroot in some of the milk, then bring the rest of the milk (mixed with the sugar) close to a boil. Add the diluted Arrowroot-milk and whisk while cooking (without boiling) the base for a couple of extra minutes or so. Cool down the ice cream base, then mix in the food colouring and chill in the refrigerator.  Churn in your ice cream maker according to instructions, or still-freeze using only your freezer. When the ice cream is almost finished, place in freezer-safe container and add the sugar pearls (if using) in desired, multiple eyes-like patterns. Cover with plastic film and a lid and store in the freezer until serving-time. Or, for a markedly slimy experience, serve immediately whilst the ice cream still is quite soft 😉

I would like to underline that Sicilian gelato is the best ice cream base I know of when it comes to making really good, smooth ice cream without an ice cream machine. And this ice cream should be no exception! 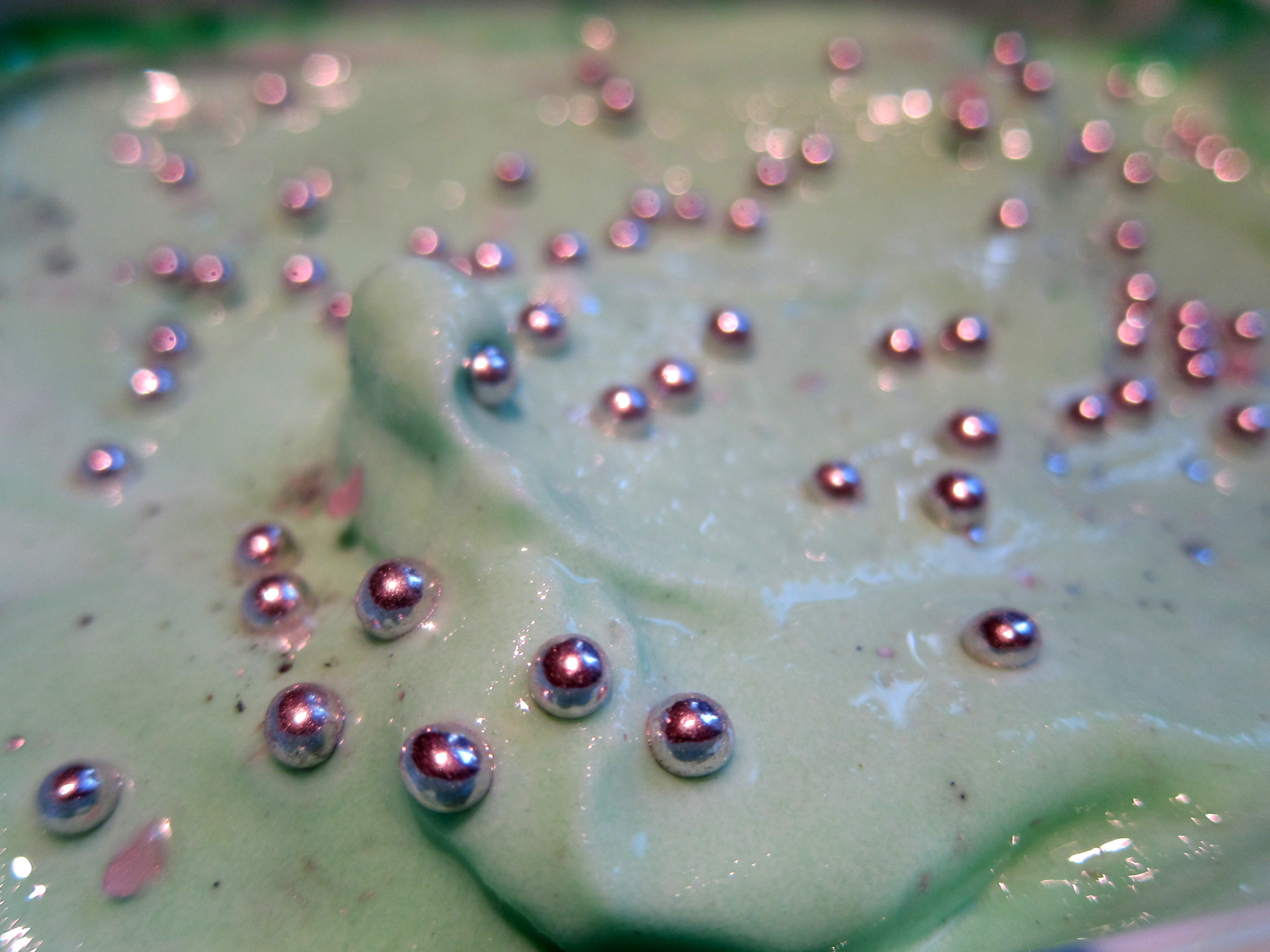 “It was a terrible, indescribable thing vaster than any subway train—a shapeless congeries of protoplasmic bubbles, faintly self-luminous, and with myriads of temporary eyes forming and un-forming as pustules of greenish light all over the tunnel-filling front that bore down upon us, crushing the frantic penguins and slithering over the glistening floor that it and its kind had swept so evilly free of all litter.”
— from H. P. Lovecraft, At The Mountains of Madness

I was personally very fond of the green monster ice cream with sugar pearls mixed in as a myriad of eyes, but the same base can of course also be coloured differently.
The second batch my creative daughter brought to school was alarmingly red. 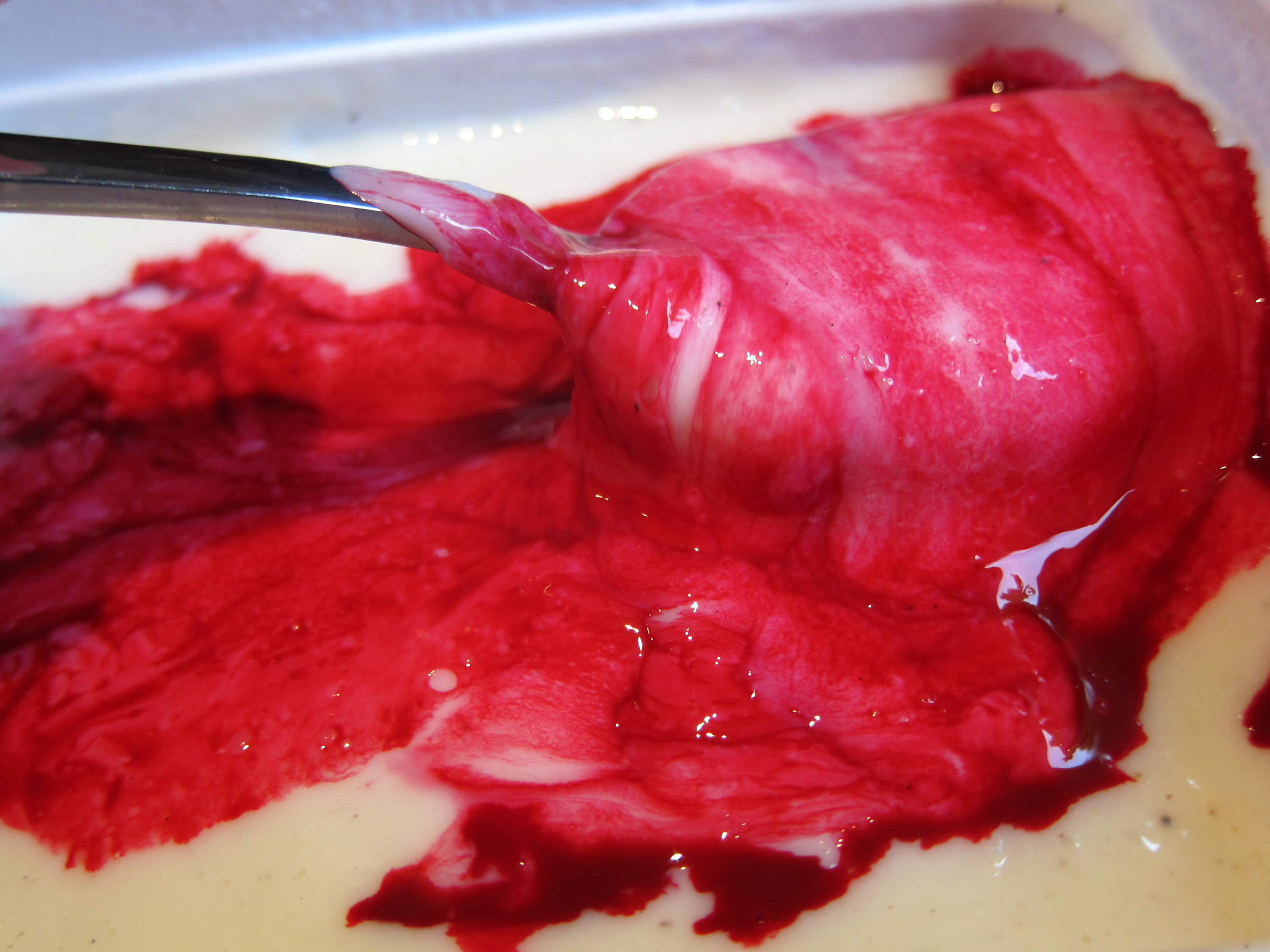 Yet another horrific ice cream, this time coloured disturbingly red

It looks fun, doesn’t it? And luckily, the ice cream (both the green and the red) turned out to be big hits in school. And not only because of the looks – this ice cream is actually quite tasty! Which might be hard to believe, since it basically only contains milk, sugar and starch. But it is nice! Just ask the Italians: Fior di latte (“milk’s flower’) is also an ice cream flavoured with milk.
So, to sum it up: this ice cream is extremely easy to make, is great fun and even tastes good!  Regardless of whether you go for monstrous green, blood-like red or any other colours that better suit the occasion – this horrific ice cream will be a popular addition to parties both for kids and for the young at heart.

Print
Monster ice cream
By: Anders@icecreamnation.org
Green, horrific fun! Not only does it look good, it actually tastes good too! And it is really easy to make. The trusty base is Sicilian gelato, in the variety that uses Arrowroot as the stabilising starch.
Ingredients
Instructions
Wordpress Recipe Plugin by EasyRecipe
3.2.1255