The Colonel – lemon sorbet with vodka

Lemon sorbet is a classic – there is probably something archetypical about the delightful frozen fusion of sweet and sour. And while preparing lemon sorbet should be a relatively easy task, it may still be a bit daunting. Because for many, lemon sorbet is for sorbets what vanilla is for ice creams – a standard-setting test case of overall quality.  In other words, when your ice cream parlour’s lemon sorbet is fresh, sound and genuine, the rest of the frozen wares should probably be fine too. And in reverse, if the lemon sorbet turns out to be yellow and composed of other things than real lemons, the place should be shunned. 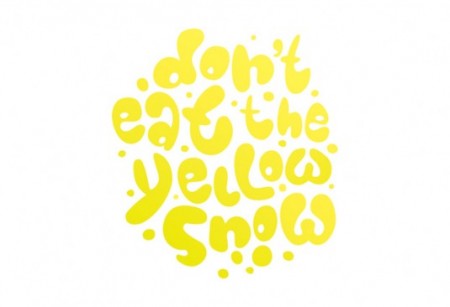 You know the saying  – and if made solely with natural ingredients, lemon sorbets should NEVER be yellow.

I have made lemon sorbet before (often using my favourite recipe for lime sorbet). My usual recipe is perfectly fine but is is always exciting to test new ways too, right? This time,  I therefore decided to up the ante and test a slightly more elaborated way of preparation – and what could then be safer than following the guidance of the Weirs couple, well-known advocates of the traditional and authentic;-) ?

And yes, I will come back to the Colonel further down the text.

5% to 6%  citric acid (= the level found in lemon juice) gives lemon juice anti-bacterial properties. Long ago in Asia, lemons were even used as antidotes. You could still use lemons for cleaning, but they are of course mostly known for their culinary capacity to set a flavour-mark. The aroma of lemons is actually also purported to heighten one’s mood! That citrus juice can prevent scurvy has been known in naval circles since the 18th century. And the lemon packs about 25 % more vitamin C than its cousin the lime fruit. 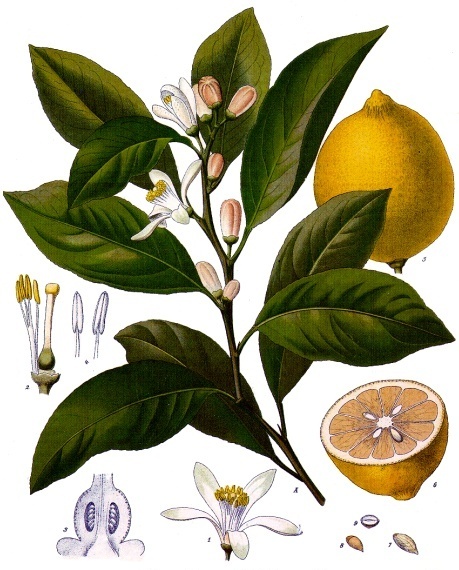 Lemons are actually a citrus-fruit hybrid from the Citrus-family (Rutaceae) of plants, and strictly speaking do not form a floral species of their own.

Lemons are quite a common ingredient in sorbets – using some lemon juice in order to prevent otherwise overpowering sensations of sweetness is a quite usual practice, regardless of the ultimate overall flavour. In lemon sorbet, however, the acidic lemon itself is the principal star! (mind you: we still need to pair the acidity with appropriate levels of sugar in order to create a satisfying sorbet). 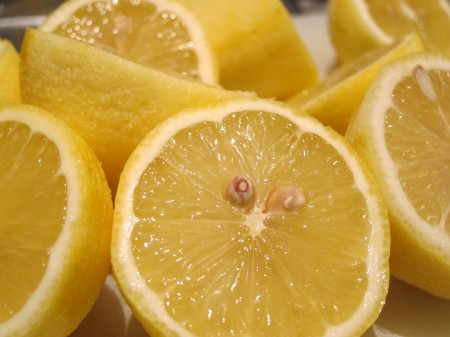 And when it come to the imparting the lemon flavour, a good lemon sorbet does not only rely on lemon juice but also on lemon zest. Adding zest has one particularly strong advantage  – the flavour is enhanced without the addition of any extra water, which is perfect for frozen desserts.  But should you keep the zest in the base and churn it too, or discard it before churning? Those of you who follow my posts know that I am quite fond of seeds, peels and the like in my finalised ice creams and sorbets. So normally, I would have left the zest in, letting the pieces be a part of the final sorbet. 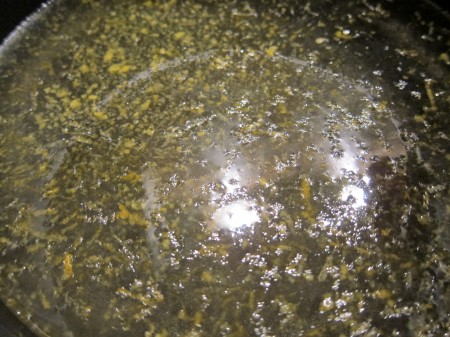 But no rule without exceptions – this time, the lemon zest would stay outside the final sorbet.  To still benefit from the zest, I followed the way of the Weirs:  I heated the simple sugar syrup and quickly infused it with the zest, left it all to chill and discarded the zest only just before the churning.

A softly whipped egg white added to the base at the time of the churning will improve the overall consistency of the sorbet, and could be recommended particularly in case the sorbet is not intended for relatively immediate consumption. On the other hand, those who are concerned about the possible health hazards brought about by raw, unpasteurised egg whites should omit it. Or use it but in the shape of “safe” Italian meringue. Or skip the eggs and go for the easy and vegan alternative Aquafaba. In case you plan on enjoying the sorbet relatively soon after churning (like, the same day or so), adding egg white or otherwise won’t be necessary in any case.

A word on the perfect pairing of sweet and sour – ultimately, this will depend on your own preferences! You may like the sorbet to be more, or less, acid. Luckily, the choice is simple – just regulate the proportions of sweet and sour with the recommended amount of extra water in the recipe (myself, for instance, added some extra water beyond that recommended amount). You may also want to add some more water … or perhaps even somewhat less.  While much of this is ultimately a matter of personal taste, I recommend that you also use the Egg test (or more advanced means, if you have the tools) to check that the sweetness-level of your sorbet base seems to be at least roughly OK – technically speaking – for a sorbet:  after all, you would not want to jeopardise the overall consistency of the sorbet:-) 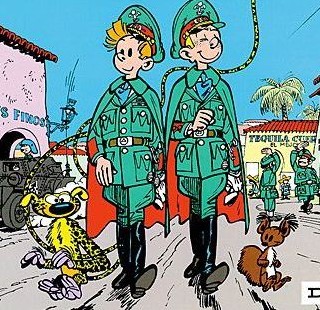 While certainly not named after the sympathetic Belgian cartoon heroes Spirou and Fantasio (seen here during their brief stint as colonels in the – fictional – Palombian army), it seems impossible to ascertain which colonel – if anyone in particular – inspired the naming of Sorbet Colonel.

The Colonel – high-ranking digestif and refreshment

A while ago, good friends of mine told me about their culinary adventures in Argentina. And they recalled how popular it had seemed to be to finish the sumptuous, meat-heavy meals with a Colonel. And “the Colonel” (or ‘Le Colonel’, ‘El Coronel’, and sometimes also ‘Coupe Colonel’, depending on your geographical area … ) turns out to be a classic variety of lemon sorbet dessert, served with (a small amount of) the hard liquor vodka.

As noted by my friends, it enjoys a lot of popularity in Argentina as a refreshing digestif towards the end of heavy meals. I have also seen it praised as a great  ‘palate cleanser’ between dishes. And yes – given the involvement of alcohol, it goes without saying that this should be an “adult only”-type of dessert.

For the vodka, I used the rather neutral Absolut vodka. You could, however, use any good quality vodka you like – the only thing I would suggest is that you avoid the ‘specially flavoured’ versions that exist. In the Colonel, it is the lemon sorbet that should do the main-flavouring, not the vodka:-) 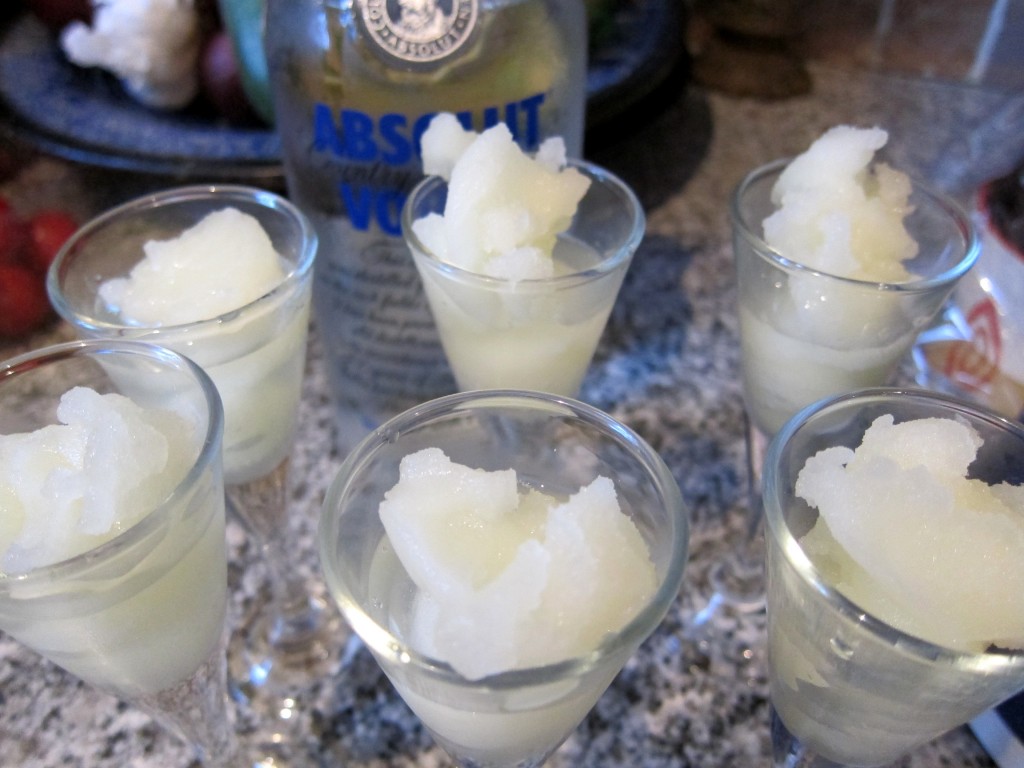 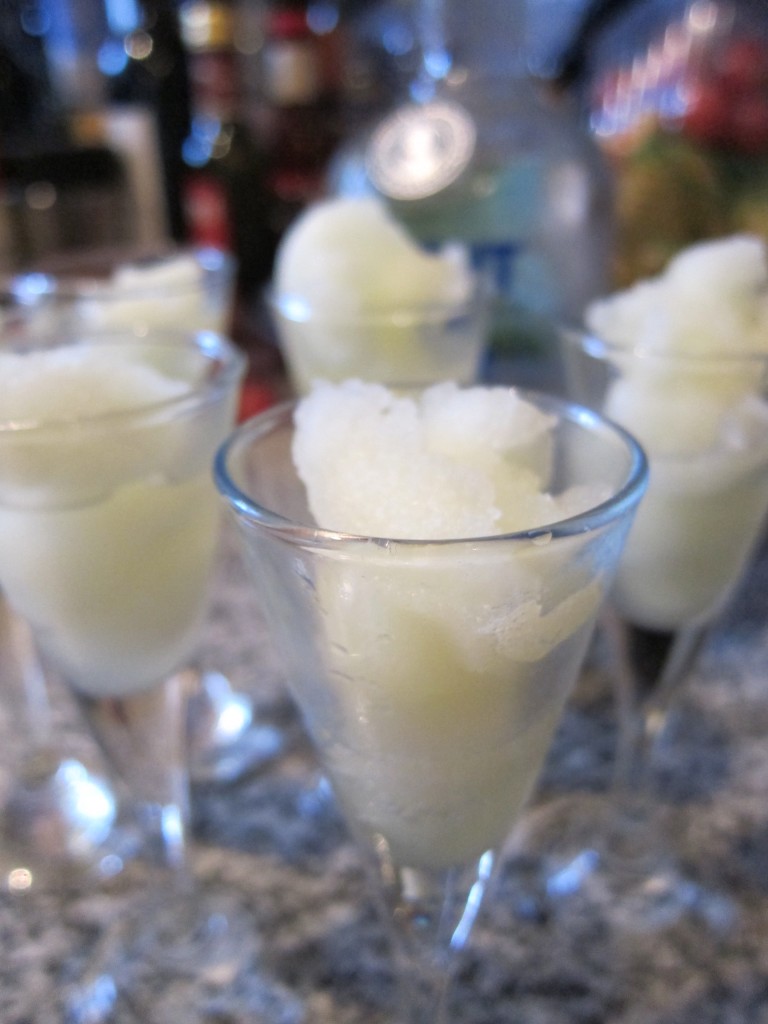 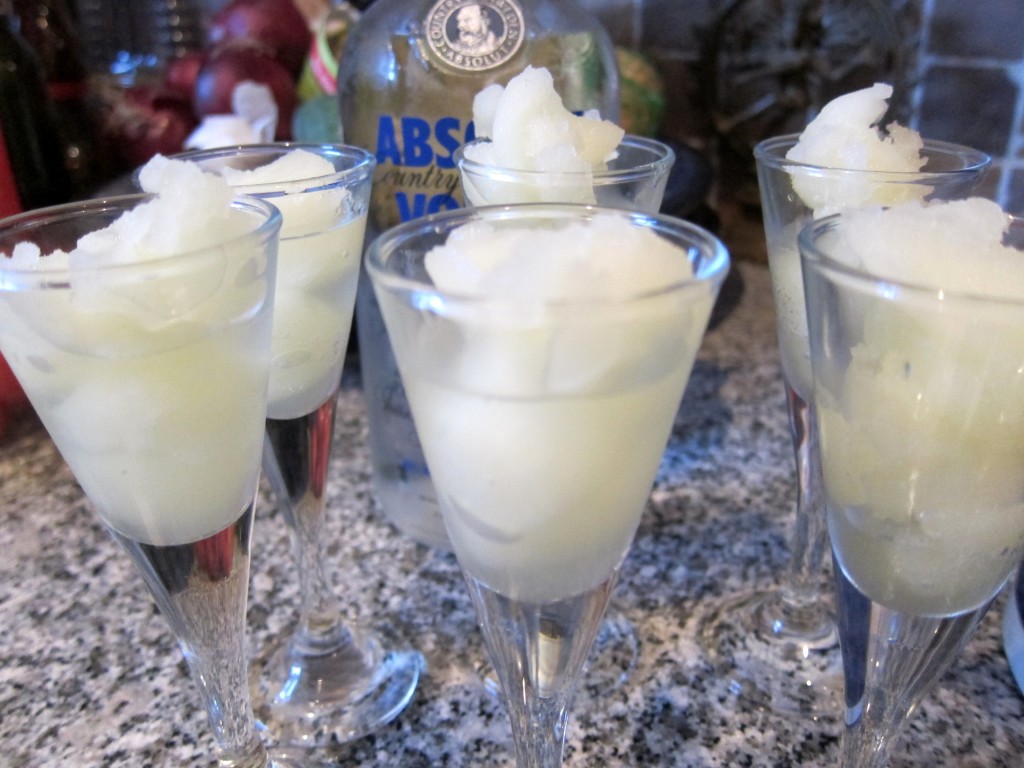 Even while we are dealing with relatively small quantities of hard liquor here, one could perhaps have expected that the combination of frozen lemon sorbet and strong vodka would be quite a chock to the system. However, the two formed a dangerously seductive couple! In fact, downing the vodka combined with the  succulent lemon sorbet was almost effortless, with the strong thrust of the hard liquor so bolstered by the equilibrated, delightful sweetness and acidity of the lemon sorbet.

When it comes to alcoholic digestifs, some people might prefer bitter sensations such as  Fernet Branca or Underberg. But for those of us who love lemon sorbet, surely the Colonel sets a difficult-to-beat standard.

Don’t like alcohol? Just go with the refreshing lemon sorbet!

And by the way, I do think that the long infusion of the lemon zest really added more complexity than usual to the final lemon flavour. In case you tend to make your lemon sorbet differently, do give the infusion-method a try – you might be pleasantly surprised:-)

Print
Lemon sorbet Colonel (with vodka)
By: Anders@icecreamnation.org
One of the real classic sorbets, here in its likewise classic version with vodka (the recipe comes closely adapted from Caroline and Robin Weir)
Ingredients
Instructions
Notes
The whipped-up egg white will improve the consistency of the sorbet, but may be excluded if you are worried/cautious about the health implications of using raw egg white. In case the sorbet is likely to be consumed very soon after preparation, there should probably not be any need to add the egg white anyway.
Perfect alternatives to the whipped-up egg white are Italian meringue, or the vegan alternative Aquafaba (both described in other posts on icecreamnation.org)
Wordpress Recipe Plugin by EasyRecipe
3.5.3208
Share