An impossible combination? No, actually not – and it is really, really easy to make too!

Over time, my kids have become, as you might  imagine, quite … discerning when it comes to ice cream. Luckily, the majority of flavours to which they have been exposed have met with their approval. But I readily admit that I still was not prepared for the huge successes recently with ‘simple’ ice pops (or ‘ice lollies’, if you prefer British English).

And guess what? Some did not even contain any added sugar! 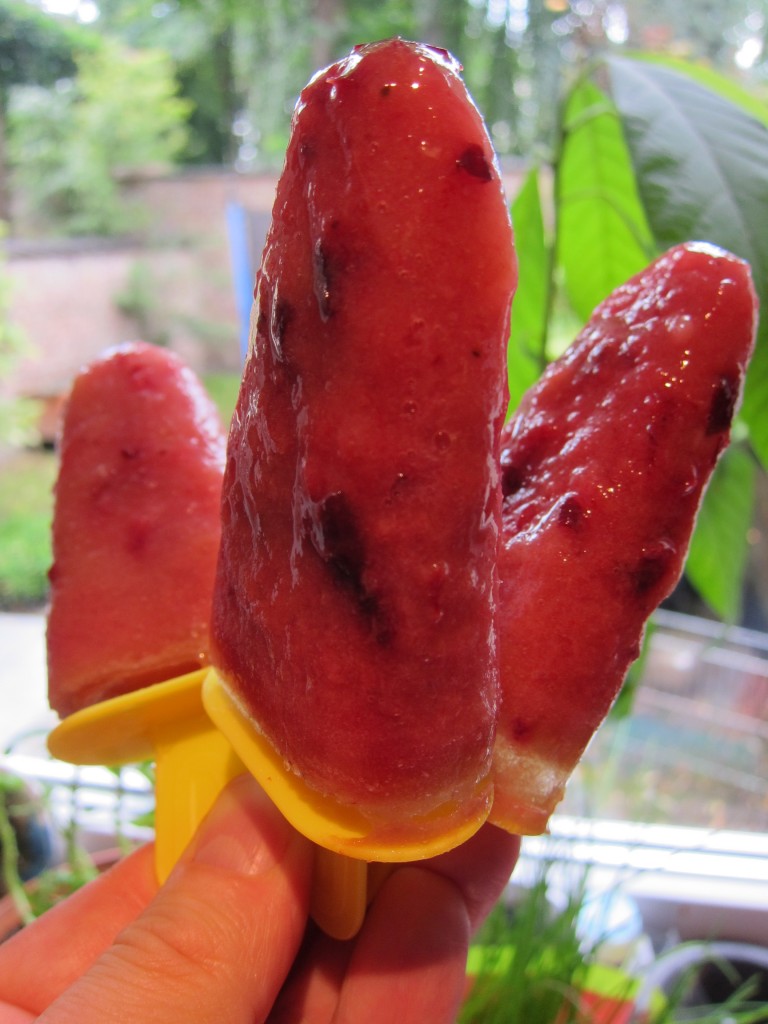 Today’s Plum ice popsicle – both popular and healthy – was actually the result of a rather failed ice cream experiment.

One of my favourite bloggers had posted a recipe for healthy plum sorbet. The recipe only called for sweet plums and some lemon juice – how nice, pure and healthy it seemed …  I decided to give it a try, despite certain rational misgivings.  Well, perhaps the plums she had been using had been of a particularly super-sweet type, but my test batch ended up tasting pretty much like frozen plum purée, pretty much devoid of sweetness. In my view, the recipe simply needed more sweetening than what the plums alone could provide. 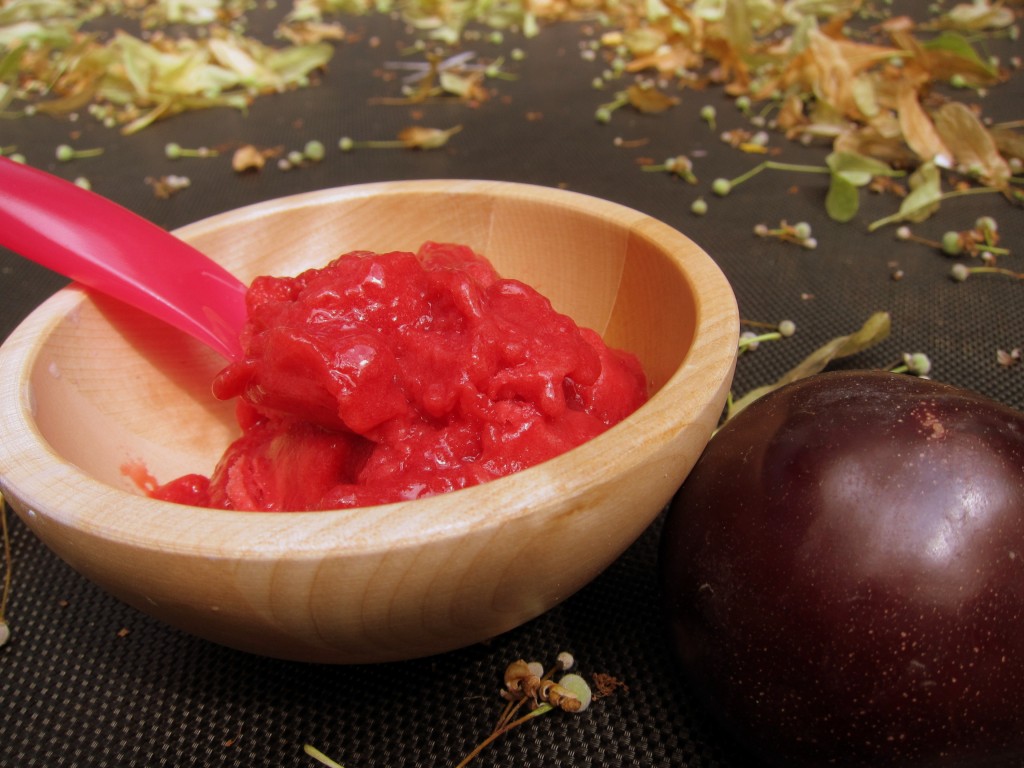 Delicious plums … and the “pure sorbet” looks very nice, doesn’t it? Too bad that it simply was not sweet enough to really appreciate …

Then it hit me – I could use the rest of the “natural plum sorbet base” and make ice pops out of it!

But it would still need more sweetening. Being somewhat disappointed (by the  rather unsuccessful ‘healthy sorbet’) but still in a healthy mood, I decided not to add any pure sugar. Instead, I reached for a couple of very ripe bananas! Recalling one of my earliest posts, the bananas would hopefully be able to fill in the missing sweetness. I mashed them together with the plums, filled the moulds, put them in the freezer and waited.

Did it work? Yes – definitely! 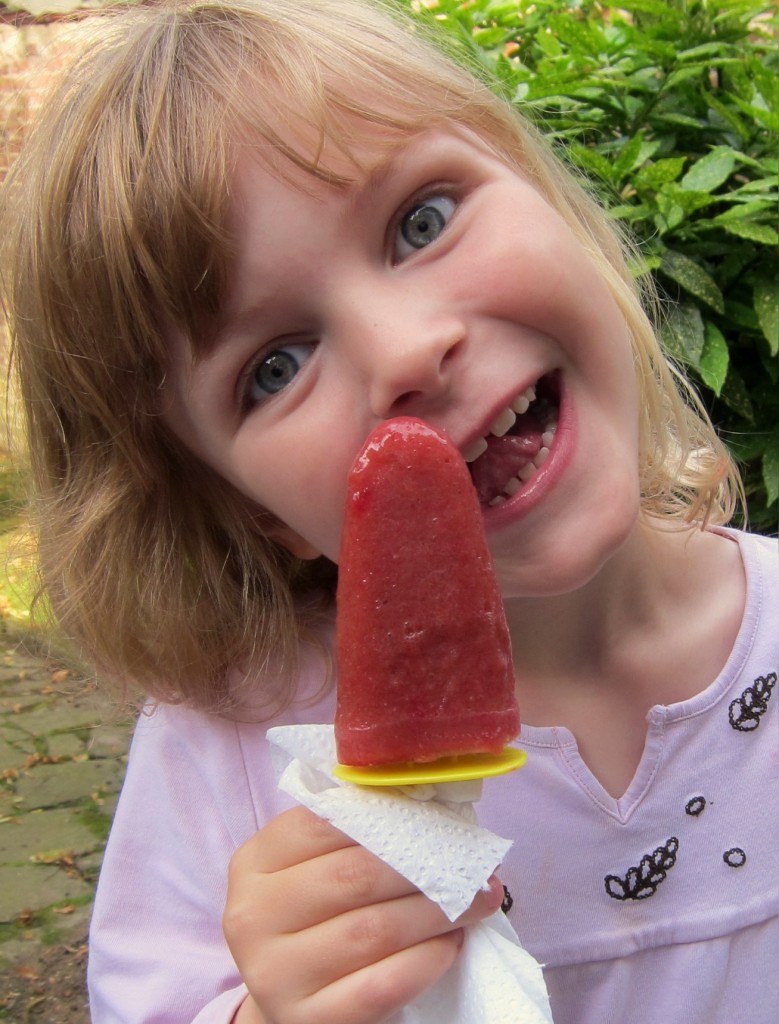 Popular beyond expectations … despite the lack of added sugar

The pops – devoid of any added sugar – were wildly popular with the kids! Since they were so incredibly easy to make (like most pops), I even felt somewhat embarrassed that I had not been making more ice pops in the past. Well, you can rest assured that I will try to make up for it from now on – there is little reason to buy ice pops when you can make better ones yourself, even with only a minimum of effort:-)

5.0 from 1 reviews
Print
Healthy Plum ice popsicles
By: Anders@icecreamnation.org
Healthy pops packing a lot of fruity punch without any added sugar
Ingredients
Instructions
Notes
Sometimes, it can be difficult to remove ice pops from the moulds - if so, you could try to put the relevant parts of the mould in hot water for a few minutes or so - the surface will melt a little and make it easier for you to remove the pops.
Wordpress Recipe Plugin by EasyRecipe
3.1.08
Share