Seeking greener pastures? Most of us probably do so at times. But few probably do it with any pre-determined regularity … and fewer still expect to encounter fairy creatures in the process.

In older agrarian times, however, the livestock was regularly brought to higher pastures during the summers. In Scandinavia, it was usually one of the farm maids who was assigned the task of being the shepherdess.  But staying  at the small mountain summer dairy farm with only cows to keep you company the whole summer was probably quite lonely business. No wonder, perhaps, that encounters with fairy creatures seems to have been so relatively frequent. 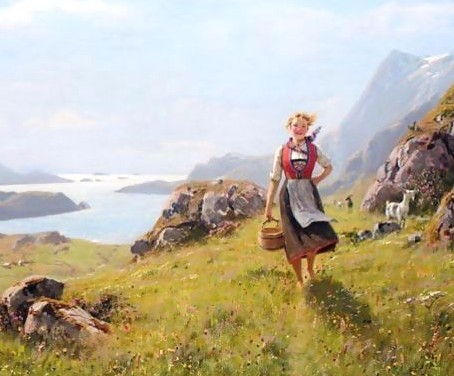 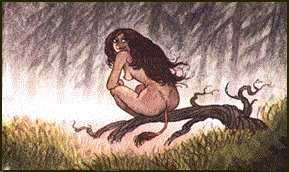 Huldran, a Scandinavian forest-dwelling distant cousin to the mermaid. Easily recognised by her tail, stunning good looks and prankster-like character.

Scandinavian creatures of folklore are, broadly speaking, almost always connected to nature. While not necessarily inherently evil, most of them could still pose considerable dangers to humans.  Huldran, a seductive forest-dwelling female creature was capable of bringing both joys and sorrows to the (usually) men she met.

And while there were some (regional, at least) male counterparts to Huldran,  the mountain shepherdesses were probably more likely to encounter beings such as the Vittror.  These beings, somewhat akin to Old English style-elves, were sometimes known as the “subterraneans”. Believed to look like humans, they formed a society of their own, living  in another, somewhat parallel realm. Sometimes, however, the boundaries were crossed – humans could end up lost both in time and space in the subterranean Vittra world.  Better then to stay clear of this fairy realm and still remain on positive terms with its inhabitants. If so, one could even end up with one of their prized magical cows – great, since these cows never run short of  milk! 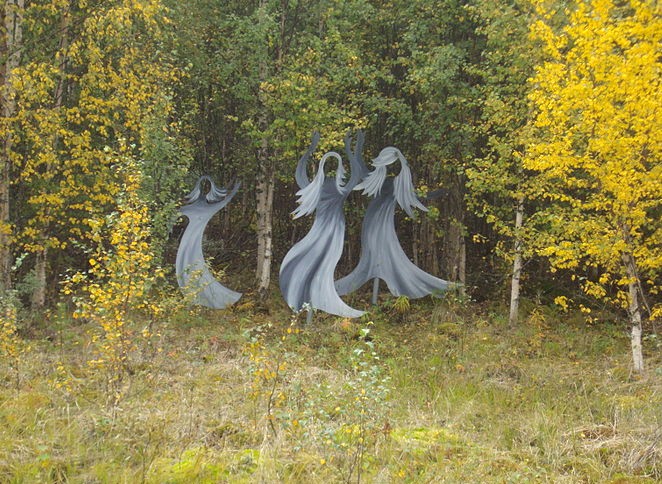 Vittror – a type of Vættr (or wight) who formed their own subterranean societies, seemingly living (mainly) in a subterranean world, parallel to our own. Vittror were believed to look like humans (although sometimes much smaller). As all their mythological brethren, they were clearly pagan.

But whether the milk came from magic cows or not – what should the shepherdesses do with it all?  Often, they spent long hours by their cauldrons making whey butter!

Whey is a by-product of cheese production. And whey butter is what you get if you boil whey for several hours. The heat turns the whey’s milk sugar into caramel – and you end up with a  Scandinavian type of Dulce de Leche, if you like.

Further cooking will bring about a firm, cheese-like consistency (“brown cheese”). For ice cream purposes, we will stick to the softer version – soft whey butter (“messmör” in Swedish).

I happily laid my hands on some fine, commercially available Swedish soft whey butter. But as long as you have some whey, you could also try to prepare it yourself  (see, for example, these instructions. Just make sure you stop the cooking process earlier, to avoid a too firm end result). 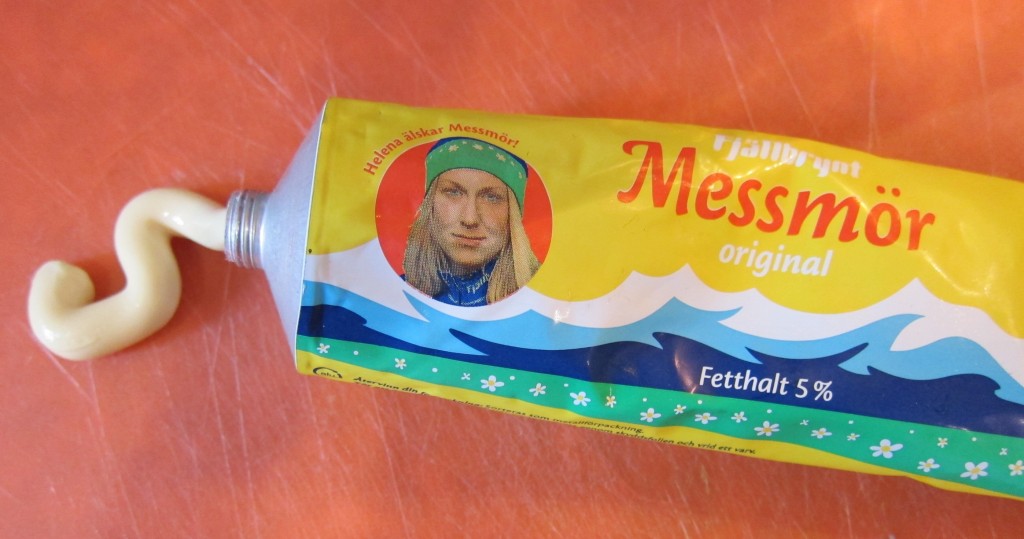 Soft whey butter contains a lot of protein but also minerals such as iron and  calcium. And about 90 % of its carbohydrates is milk sugar (lactose). The consistency may be somewhat butter-like, but the taste is not: it is sweet and somewhat salty, with no real notion of buttery fatness at all. Sounds good, right?

When I grew up, soft whey butter was a common sandwich spread popular both with kids (“great – it’s sweet!”) and their parents (“it’s healthy, so you can have some more!”). And in Norway, whey butter can apparently still be found on about one out of every third sandwich. Still, many consider it an acquired taste.  And judging by the reactions of my kids, this might well be true  – sadly, learning to enjoy messmör is obviously a neglected part of their Scandinavian upbringing.  Having grown up on the stuff myself, however, I would like to stress my (clearly biased) view:  I think it tastes great!

But would it work as an ice cream flavour? Well, there was only one way to find out …

Choosing an ice cream base

As a base for the ice cream, I chose a custard-type with eggs  (but, as always, you could well experiment with any other type of base too).  The details of making this custard base are set out in the recipe below. They basically  follow the ordinary pattern (whisk together sugar and egg yolks, mix with pre-heated dairy, thicken the custard by bringing it to pasteurising temperatures, cool it down: ready!).  In order to preserve the particular flavour of the soft whey butter, I only added it once the custard was ready (mind you: given the way soft whey butter is made, it might also have worked very well to put it into the mixture already with the dairy but I took no chances). 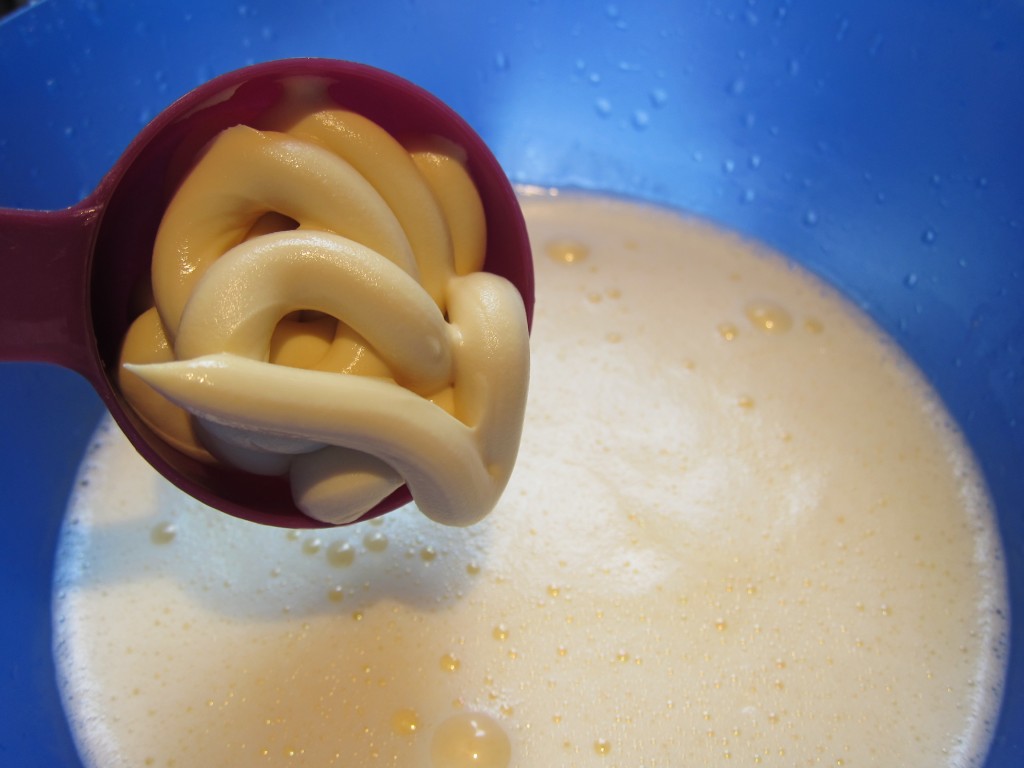 Adding the soft whey butter to the custard base

When the  soft whey butter has been added to the ice cream base – whisk thoroughly to make sure that the soft whey butter dissolves completely. Then, let the custard/soft whey butter-mixture cool down. Once cooled  down, place in the refrigerator to chill for a few hours, or preferably over night. 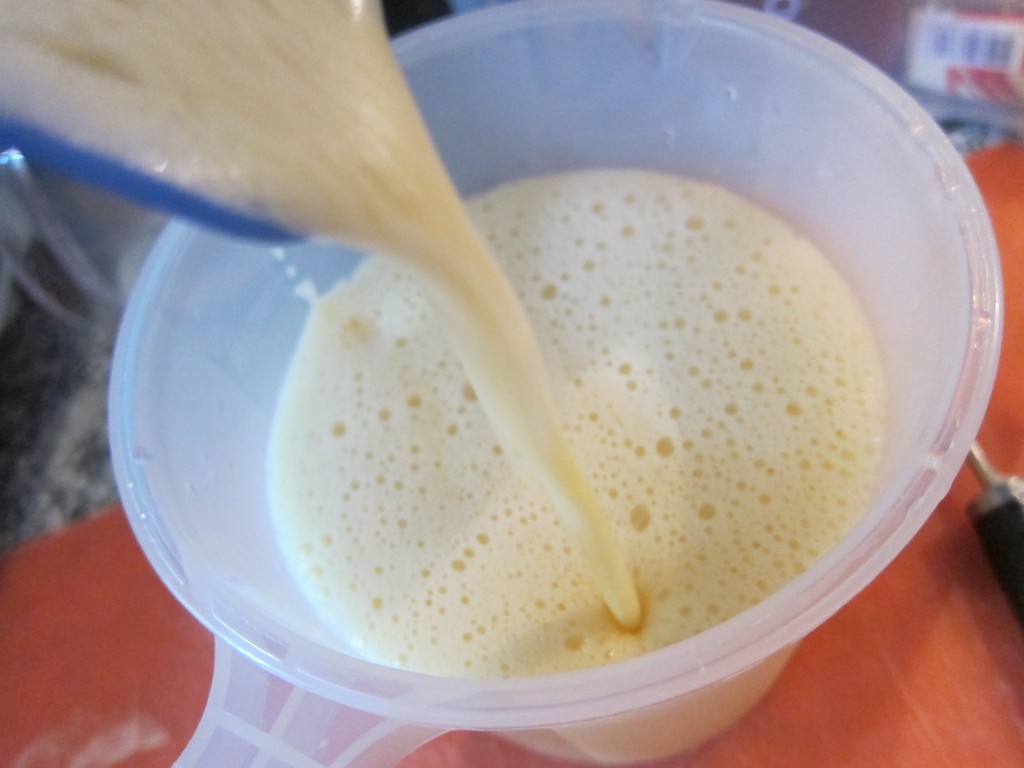 Already when I was churning the ice cream, I noted the great texture and consistency of the ice cream.  Soon, I could also conclude that it tasted deliciously!  Soft whey butter has its own distinct sweet, yet somewhat salty, flavour. And this characteristic flavour carried across most faithfully. While the ice cream quickly soared towards the top of my own favourite list, I have to confess that none of the kids – sadly unconditioned to like messmör – appreciated the ice cream. I guess it just goes to prove that this might be an acquired taste after all. Still, I firmly believe that this is a great flavour well worth testing – particularly if you already like Dulce de leche.

Since ice cream can be evaluated along more lines than “just” bare flavour, let me add a few words about  body,  texture and ‘mouthfulness’. And I will keep it short – this ice cream scored extremely high in all three of these categories.  I would even go so far as to say that the combined experience in these respects  was among one of the very best I have ever had. 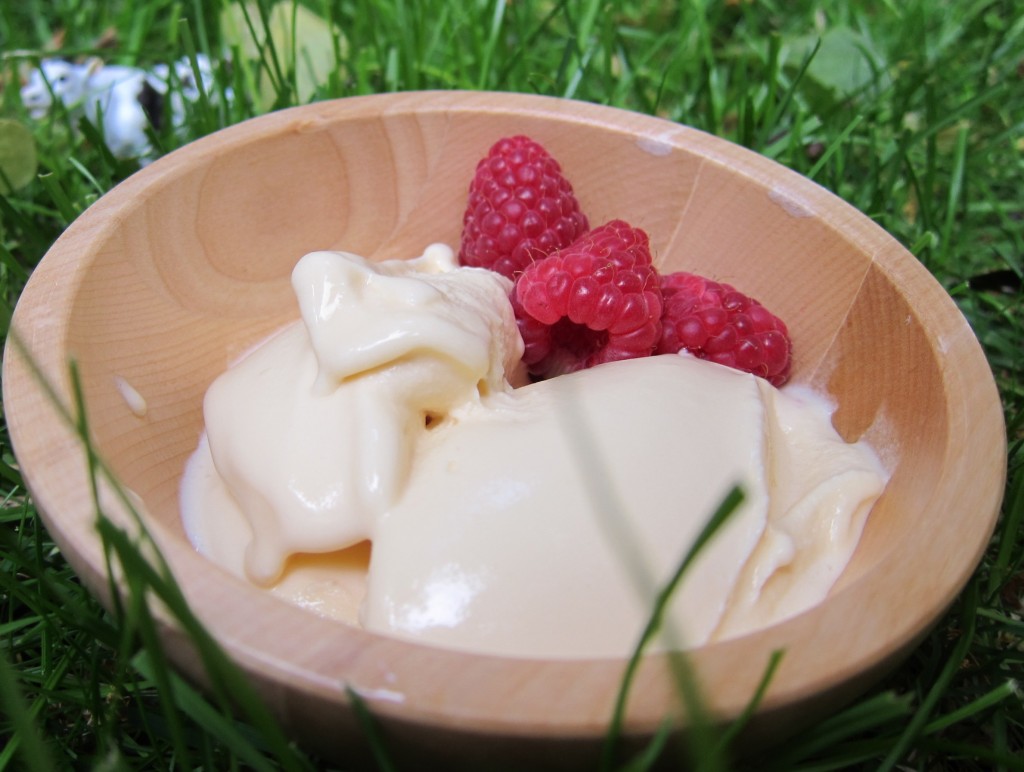 And guess what? Even after spending many, many hours in the freezer, the ice cream remained invitingly chewy, soft and scoopable. My guess is that it is the high amount of combined sugars (counting all the milk sugar coming from the soft whey butter) that partly contributes to the fabulous end result. So very nice then that the ice cream not only has a nice structure but also tastes absolutely delicious:-)

So, whether you want to widen your culinary horizons, or want to rekindle an old favourite flavour – The soft whey butter ice cream is waiting for you! 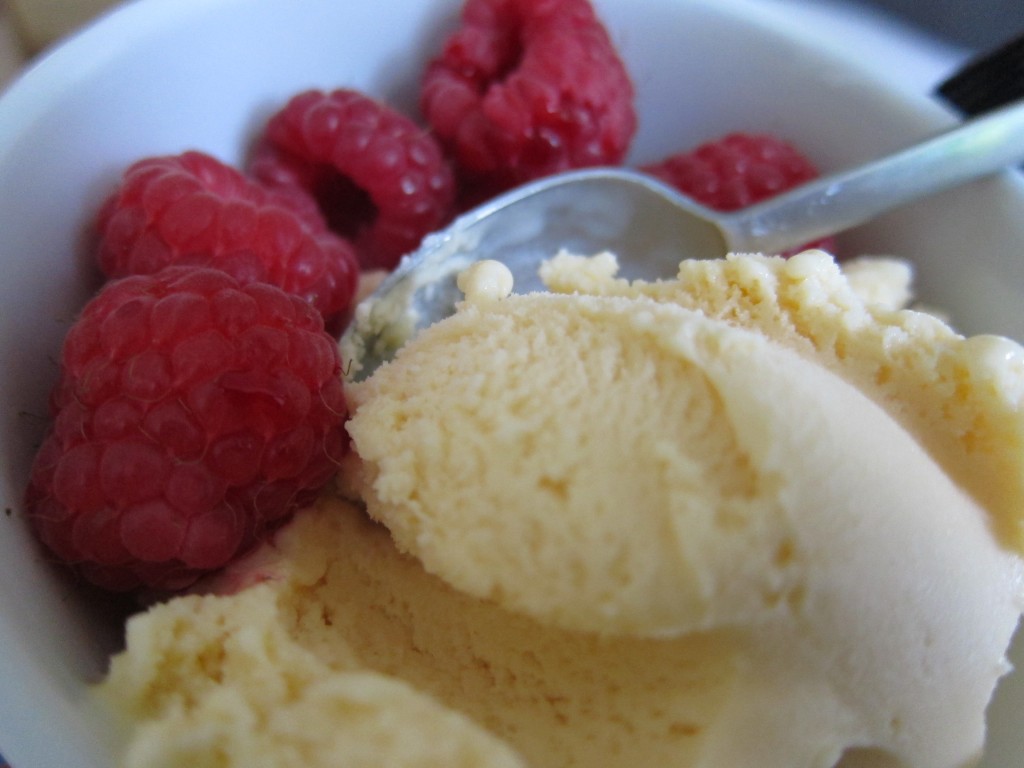 Even after hours in the freezer, the soft whey butter ice cream still maintains its smooth and “ice cream perfect” body. And it tastes deliciously!