Follow me to ancient Rome and seek sweet ice cream- inspiration  … from the world’s oldest known collection of antique recipes!

There is something fascinating about the ancient Roman Empire – a fascination fuelled not only by remaining ruins, books and historical research but notably by popular culture. Films like  “Gladiator”, and TV-series  like “I, Claudius” and “Rome” all do their best to take us back to the days of the Ceasars.  But one of my first lasting encounter with the culture(s) of the  Roman empire was probably through the comics, namely the adventures of  Asterix and Obelix. 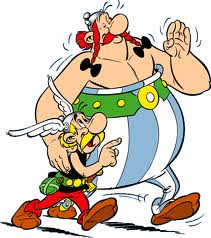 At the time, I did not really think so much about the pleasant fact that Asterix and the other characters always managed to enjoy food  (and here I’m not only thinking of Obelix and his regular wildboar-excesses).  The fact that the characters actually manage to spend time eating and drinking throughout their many adventures  is  probably one of those many small things that makes “‘Asterix” stand out from many other stories set in Roman times. Despite the many sterling qualities of Asterix, however, there are older and more detailed sources to turn to when it comes to Roman food.

“Apicius” or “The Art of Cooking” (‘De re coquinaria‘ in latin) was long believed to be the work of the well-known (to some, infamous) Roman food libertine Marcus Gavius Apicius. This Apicius lived during the first half of the first century AD, during the reign of Roman Emperor Tiberius.

Today, however,  many believe that ‘The Art of Cooking’  is a compilation of recipes made at least about +three hundred years later, by a certain Caelius Apicius (a k a Apitius Caelius). Not much is known about this later Apicius (and some even doubt that he ever existed!).  It seems clear, however, that the Apicius collection did not only draw upon recipes from “the famous” Apicius, but probably also from other, less flamboyant Greek sources (if you are interested, read a brief compilation on the issue here).

But back to our most famous Apicius – Marcus Gavius. He has gone down in history as closely connected to the more orgiastic aspects of Roman eating habits  –  excelling in food extravaganzas and spending fortunes on exotic delicacies such as camel heels, cockscombs, and the tongues of peacocks, nightingales and flamingos. No wonder that ‘Apicius’ later seems to have been used as a nick name and a synonym for ‘gourmet’.

Because of his extravagant lifestyle, Apicius also became a given target for other Romans who advocated virtues such as moderation. In this light, it is probably a good idea to read the different stories about his death with some scepticism. In one version, he prefers to commit suicide once he realises that he has ‘only’ a few millions left of his fortune and thus would be forced to change lifestyle in a relatively near future. Another version simply claims that he stuffed himself to death. 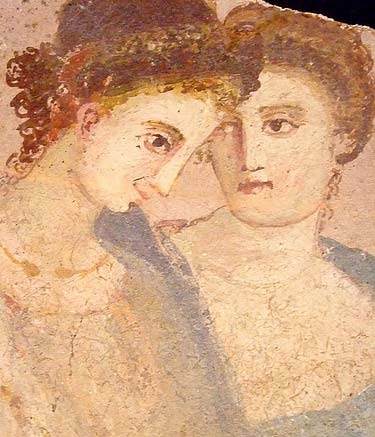 – Have you tried that new cookbook by Apicius yet?

Leaving the question of its ultimate authorship aside, it is clear that the recipes in “Apicius” tell us a lot about ancient Roman cuisine. And despite the extravagance so often connected with our most famous Apicius, his recipe for sweets  (if, indeed, it is his!)  is simplicity incarnated – dates, honey, nuts and salt!

While the recipe also mentions the possibility to stew the dates in honey and wine, I decided to keep it simple, straightforward and child-friendly.  Should you, however, prefer to follow Apicius more closely and make a slightly less innocent version, try to stew the dates in a small amount of appropriate dessert wine (like Marsala, Port or Madeira).

Honouring the roots of the recipe, it seemed appropriate to use the Italian gelato-type (with starch and no eggs), however replacing the sugar with Apicus’  favoured sweetener – honey. 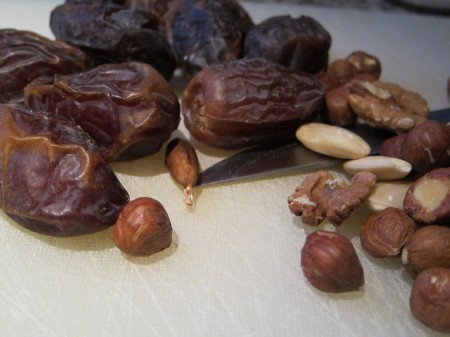 The nuts used were an assorted mixture of hazelnuts, walnuts and almonds. To better prepare them for their future ice cream-environment, I recommend that you roast them in the oven first (175º C (350º F) for 10-12 minutes; shake them around after half that time. Then, let them cool, preferably also chill in the refrigerator, and chop them in pieces before adding them to the ice cream base towards the end of the churning.

The dates I used were dried, but still enticingly moist and soft. The dates’ natural high sugar-content should ensure that they do not freeze rock-solid in the ice cream, but do make sure to chop them up in rather small pieces anyway. The dates should also preferably be chilled before adding them to the ice cream base towards the end of the churning, along with the chopped nuts.

By the way, and for the records – in reality, the Romans did not have the techniques required to make “real” ice cream, so in that sense, this recipe is most certainly an anachronism (read more about ancient attempts to make ice cream here!). 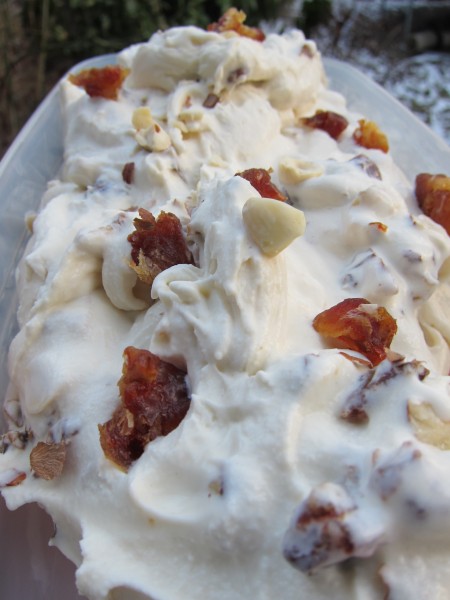 The final result? Very nice! No wonder the Romans liked the combination of dates, nuts and honey – a flavour combination that really has stood the test of time 😉  And the ice cream really evokes the wings of history also in another sense:  all the main ingredients come across as being  “natural and unprocessed”, which also dons a pleasant air of  wholesomeness to the experience.

You do not need any togas to prepare this ice cream:  Just be grateful that you – unlike the ancient Romans – live in a time when ice cream can be made! And when you are done, close your eyes, take a spoonful … and let your fantasy bring you back to ancient Rome!

Print
Dulcia Domestica ice cream à la Rome
By: Anders@icecreamnation.org
Using a classical recipe on sweets from the days of the Roman Empire by Apicius, this ice cream - on a base of Sicilian egg-less gelato - is filled with a honest and sweet, yet slightly salty, mixture of nuts and dates.
Ingredients
The ice cream base
Add ins
Instructions
Wordpress Recipe Plugin by EasyRecipe
3.2.1251
Share