Garlic ice cream is controversial – some hate it, others love it. Is it a only a fad? Something to eat just for the novelty, or to show that you dare?

Clearly, the flavour is not for everyone: if you really dislike the taste of garlic, feel free to pass on this one. On the other hand, if you like (or at least can tolerate) garlic, you might be in for a pleasant surprise.

A number of medical benefits are linked to garlic. And as all fans of vampire lore know, using garlic is also one of the ways to keep the Count and his minions away. Exactly why is harder to explain, but garlic had been ascribed strong and mystical powers long before Bram Stoker decided to write “Dracula” in 1897.

As to the numerous positive medical effects, the earliest claims seem to go back thousands of years. While some claims made by traditional herbal medicine would seem a bit far out, others actually have received a certain backing from modern science.

A field where garlic has a long-standing positive reputation relates to the treatment of, and prevention of common cold and coughing. Garlic does possess both anti-bacterial and anti-viral qualities.

Personally, I’m very fond of garlic. But much as I love garlic, the present experiments were actually motivated for health-reasons. Summer was over, and with the kids back in school, the household once again got its fair share of the season’s coughing, sore throats and common colds.

What better way to help fight these ailments than with Mother Nature’s own traditional remedies? I decided to let honey join forces with garlic, furthermore adding some healthy yoghurt to the ice cream base. Given the amount of honey used, the limited amount of cream, and the relative lack of solids, I decided to gain some stability by adapting an ice cream base along the lines of Sicilian gelato (with starch).

Would you believe it? The flavours of  garlic-honey and  raspberry actually marry beautifully!  While garlic ice cream alone can be a bit … demanding (if you are a less devoted fan), the rich raspberry jam adds a welcome, complementary and sweet dimension to the final flavour. 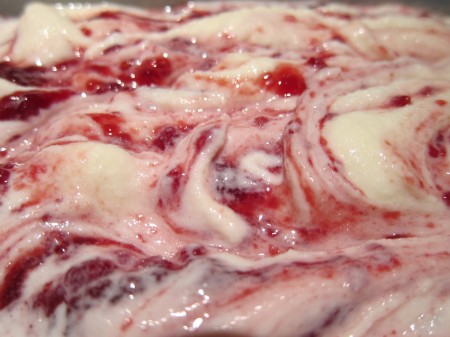 Raspberry jam just stirred in, with a view to rippled ice cream, following some further freezing to be done

The adults in the family were very fond of the results. The dominating flavour is unmistakeably garlic, but the honey and the raspberry do soften the general impact. Their presence also transforms the tasting experience, from being something to endure, to being something to truly enjoy. The rare combination of flavours make for a different, but delicious, frozen dessert. 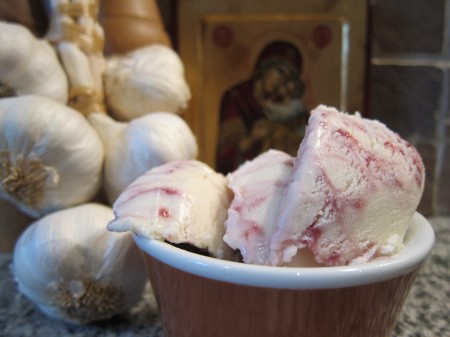 I have to tell you, however, that the kids were not convinced. They all turned down my generous offers to test the ice cream, which must be the first time ever. Still, I guess it would be hard to blame them. After all, they had already tested an earlier garlic recipe of mine … with much more garlic, and much less raspberry.  Since time is supposed to mend all things, I will make sure to repeat the offer in the future.

And myself? Filled with healthy amounts of both garlic and honey, I look forward to facing the season’s evils with regained confidence. 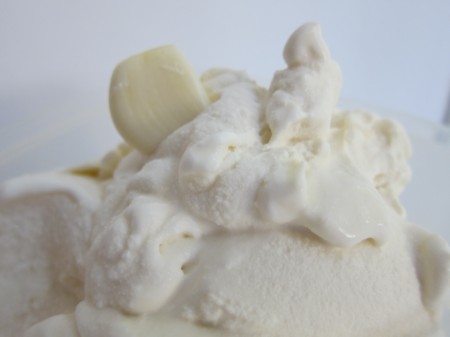 Print
Garlic honey ice cream with raspberry jam (yields about 850 ml)
Delicious and healthy natural remedy against common cold, sore throat, coughing and general evils. Also a treat for all fans of garlic. Enjoy!
Ingredients
Instructions
Adding the Raspberry jam
Creating a ripple-effect with Raspberry jam
Very fond of garlic?
Notes
If you are afraid that the garlic flavour will be overbearing, reduce the number of garlic cloves. As garlic loses a lot of its healthy qualities when heated, this should ideally be avoided when preparing ice cream (no problems with this recipe). For similar reasons, the yogurt should not be heated either, and only added at the "chill-stage". Another way to get a milder garlic taste is to to let the peeled, un-crushed cloves (possibly minced, but that will again increase the flavour) either infuse in (a) the milk/cream, or (b) in the honey (if the honey-method is used, preferably overnight, or even longer). After the infusion has been done, you could then discard the cloves/minced cloves. This will make the garlic flavour less intense, which might prove useful for some.
Wordpress Recipe Plugin by EasyRecipe
2.1.7

In urgent situations, I have also tested the  “no-heating required” American (Philadelphia-) style of ice cream making. This usually works fine too, provided you follow that base recipe (meaning more cream). For even further stability, in case you do not mind using raw eggs, one or two egg yolks whisked into the base can do the trick. 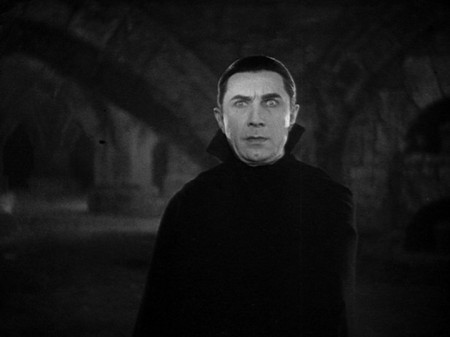