In search of “smooth” – A summer quest without ice cream machine

Going 0n vacation and leaving the trusted ice cream machine behind can be a challenge.  Since I usually tell people that it is quite possible to make good ice cream even without an ice cream machine, I decided it was time to practice what I preach (for my general preaching on non-ice cream machine-making, go here. )

However, as most people who have tried probably has noticed, so-called still-frozen ice cream is often plagued by certain shortcomings – the major one being unpleasant iciness (the anti-thesis to “smooth”, if you like). And so began my summer quest – Would it be possible not only to make ice cream, but also to get the “smooth” ice cream we all know and love?

To add to the challenge, I decided to begin in all simplicity – trying to avoid using too many ingredients, to shun elaborate and fancy stabilisers seldom found in a normal kitchen and to generally limit my use of kitchen gadgets as much as possible.

The first attempt took place on a beautiful small island in the Swedish archipelago, in a frugal kitchen devoid of any fancy gadgets or ingredients. My idea was to test how far honey – a natural inverted sugar – would get me when preparing what must be one of the least complicated recipes ever for home-made yoghurt ice cream. As iciness is the usual Achilles’ heel of still-frozen ice cream, the inverted sugar would at least have a better capacity to hamper ice crystallisation than ordinary sugar-types, and thus possibly improve the smoothness of the final, frozen ice cream. 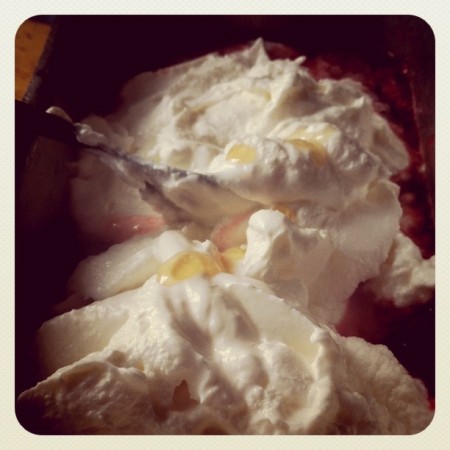 250 gram frozen/half-frozen strawberries (optionally with about 50 gram half-frozen blueberries or other berries after your liking added) + 1-2 tablespoons of sugar and the juice of 1/2 lemon.

Macerate the berries (=slice the strawberries roughly, mix with 1-2 tablespoons of sugar and the lemon juice) and set aside for at least 1/2 hour.

Mix thoroughly the yoghurt with 50 ml (about 3 1/2 tablespoons) of the honey.

Purée (roughly, at least) the macerated berries. Whisk together with the yoghurt-honey. Blend in the remaining 50 ml (3 1/2 tablespoons) honey.

Put this ice cream base in a suitable (preferably shallow) sealed container and place in the freezer. After 30-45 minutes, remove from the freezer and churn rather vigorously to an even “slush”. Return to the freezer. Wait another 45 minutes and repeat. Repeat again.

After a total of about 5 hours or so, your yoghurt ice cream should be ready. Remove from the freezer and allow at least 20 minutes for softening-up before serving it.

On the positive side, this still-frozen Berry yoghurt ice cream is incredibly easy to make.  Despite the amount of honey used, is does not come across as overly sweet in flavour. All in all, it makes for a quite refreshing and relatively healthy dessert. And somewhat to my surprise, even the kids liked it! 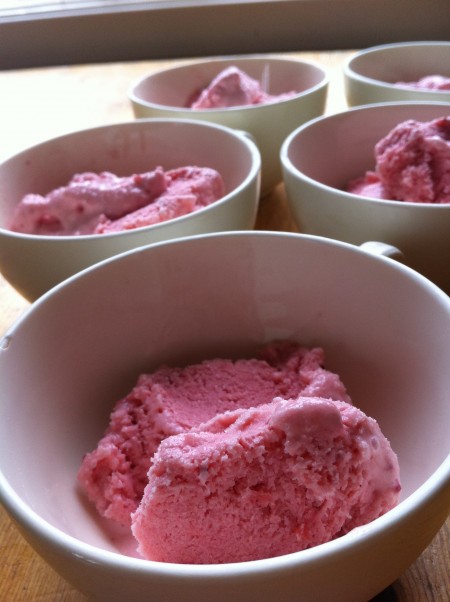 On the negative side, however, the texture of this ice cream could not  honestly be described as “smooth” (in the “good ice cream-sense), still straying on the icy side of the scale.

While the positive aspects of this ice cream certainly managed to lightened up a couple of our days on the island, it seemed that the summer quest would have to continue. If honey alone should be main-responsible for a less icy texture in combination with yoghurt only, quite unhealthy volumes would probably have to be added … with likely negative impacts on the overall flavour and level of sweetness too.

I began to contemplate a new strategy – using more cream, and even whip it! Stay tuned for the next episode of “In search of ‘smooth”! [Update! Can be found via this link!]