In search of “smooth” (II) – the creamy part

Remember my earlier attempt to create “smooth” yoghurt ice cream with the help of honey? Back to the urban civilisation, but still without an ice cream machine, I decided to see whether honest dairy cream would be able to make the crucial difference. 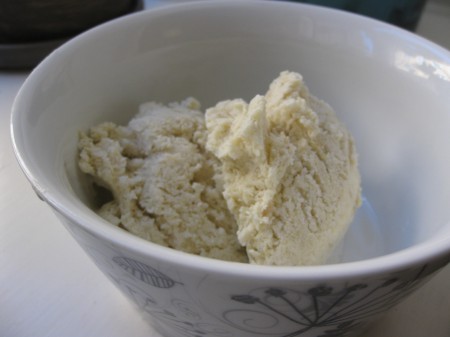 While many still-frozen ice cream recipes basically calls for nothing else but cream (when it comes to the dairy part), I wanted to see if it was possible to make something less fat, and still get a good texture out of it. After all, it was not frozen mousse or parfait which I was after (which, arguably, is what you get if you mainly freeze whipped cream). This time, taking a cue from my first experiment, I decided to mix yoghurt and some whipped cream. 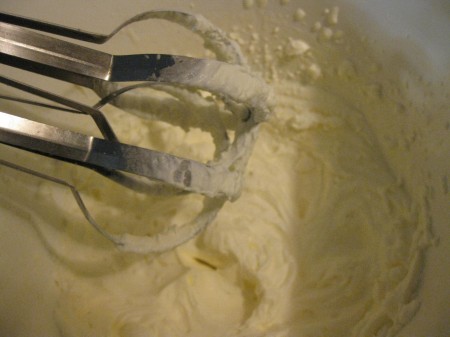 Whipped cream – providing not only fat, but also improved structure and body

Being very fond of the particular and tart flavour of rhubarb, inspired by a post by Jessica Sidman of the Frozen fix and an often-used (by me, definitely!) recipe by Alex Barker, from his book “500 Ice Creams, Sorbets & Gelatos“, I settled for rhubarb yoghurt ice cream.

Intentionally cutting down on the original amount of cream, thus balancing on the lower end of the “fatty scale”, my recipe looked like this:

Print
Rhubarb Yoghurt ice cream
A nice and easy to make-yoghurt ice cream that does not require an ice cream machine. Best enjoyed shortly after preparation.
Ingredients
Instructions
Notes
While the cream should be whipped rather firm, do not overdo it - you may end up with butter, or at least an unpleasant tinge of buttery-fat.
Wordpress Recipe Plugin by EasyRecipe
2.2.8

On the positive side, in terms of “smooth” and “not so icy”, this yoghurt ice cream did much better than my previous attempt with yoghurt and honey. While this one also froze pretty hard, it softened in a  better way and also had an improved mouthfeel. But make no mistake – this is a great ice cream, particularly if enjoyed fresh (and still not frozen too solid)!

Also, if you prepare the ice cream with an ice cream machine, you could well use “ordinary” yoghurt, instead of the fat, Greek-style yoghurt proposed here. 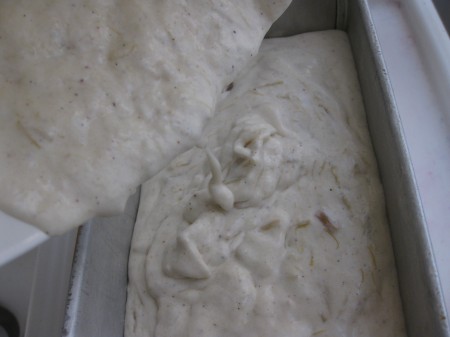 The ice cream base just about to enter the freezer for the first time. Notice the shamelessly large pieces of rhubarb coming out of my “no mixer-used” purée. But then, I don’t really mind:-)

On the negative side, and despite the relative progress noted above, even this recipe proved to freeze just a bit too firmly, and resulting in a bit too many of the structure leaning towards “icy”  to truly qualify for the label “smooth”: Obviously still an ice cream best enjoyed soon after the preparation!

More fat, even more sugar or an added stabiliser could possibly be ways to improve the recipe. However, I was not too tempted to try the first two routes. 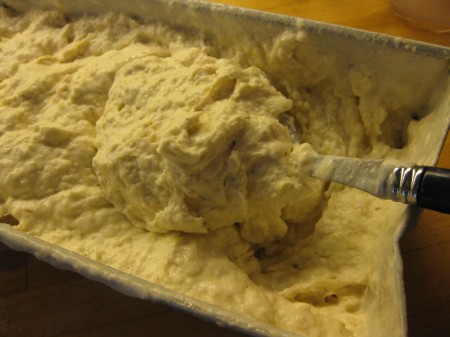 Alas, still a tad bit too firmly frozen to qualify for “smooth”:-(

Making ice cream mainly on the basis of still-frozen, whipped cream is more of a (French-style) parfait to me than “ice cream”. These can be exquisite – my dear mother makes a couple of such parfaits, and I generally always end up eating unhealthy amounts of them, forgetting that the main ingredient is whipped and frozen cream.  But here, my goal was to achieve the ice cream-typical characteristic of “smooth” – turning “ice cream” into “parfait” would simply not cut it.

Granted, quite a lot of yoghurt would have to be replaced in this recipe before whipped cream would rule supreme. However, even at the present amounts the particular “frozen whipped cream”-consistency and flavour was detectable. Freezing the base quicker (i e typically using an ice cream machine) would likely improve things, but this was no option during this still-freezing quest.

More sugar, then? In my view, the seductive rhubarb flavour was already rightly balanced in terms of sweetness. In future try-outs, I would probably rather experiment with replacing some of the existing sugar with (some type of) inverted sugar. If no kids were to taste the ice cream, I could also consider adding a little alcohol to impede the freezing process. I decided, however, that the next attempt would be based upon a stabiliser.

Stay tuned for the next attempt in search of “smooth”! [Update: Can be found via this link!]