Looking for something special? Something fresh and light? Then surprise your tastebuds with this exotic frozen cocktail of pineapple, ginger and lemon! These delicate flavours all unite in a truly delicious and refreshing frozen yoghurt! Not spicy enough for you? Then sprinkle on some chile pepper flakes! 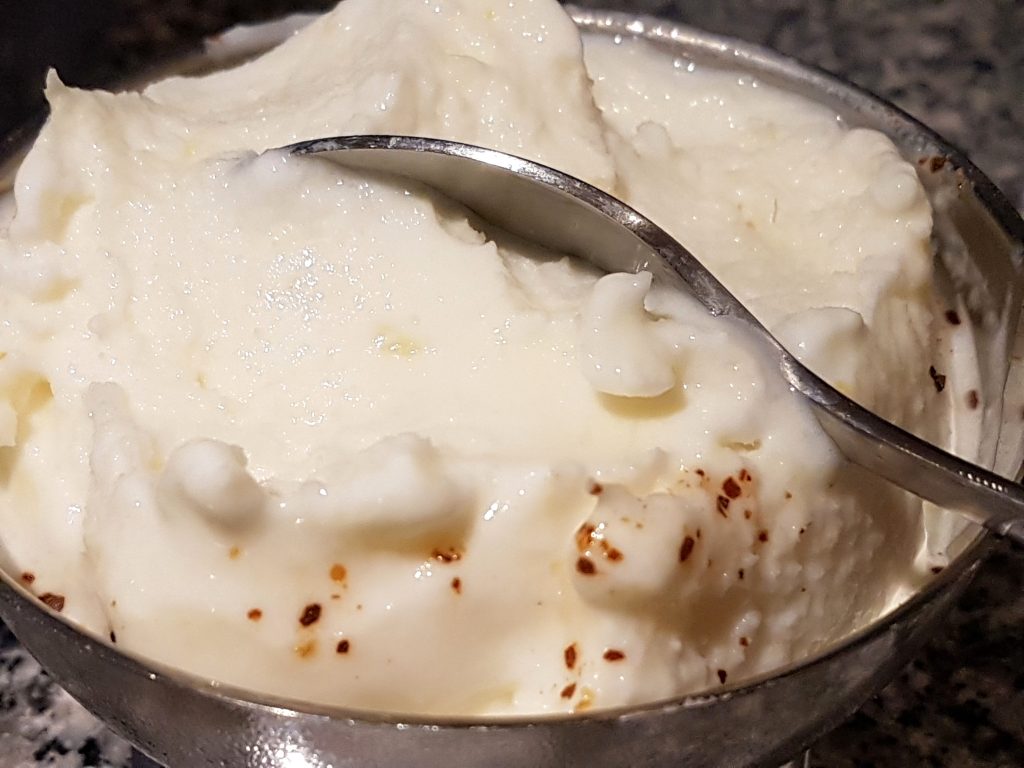 Spicy Pineapple frozen yoghurt … but the chile flakes are optional 🙂

Pineapples are fascinating tropical fruits, and avid readers may remember my Piña colada sherbet. But pineapples can be made even more interesting: When I happened to come across a frozen yoghurt recipe by Melanie Zanin, where the sweet pineapple was combined with ginger, lemon peel and chile flakes, I got that good, warm feeling of having stumbled upon something very promising. And while the flavour rightly can be described as “spicy”, it is not (necessarily) a particularly hot spicy one: feel free to adapt the level of heat to your own personal preferences!

Oh, and the recipe is really simple. I promise! 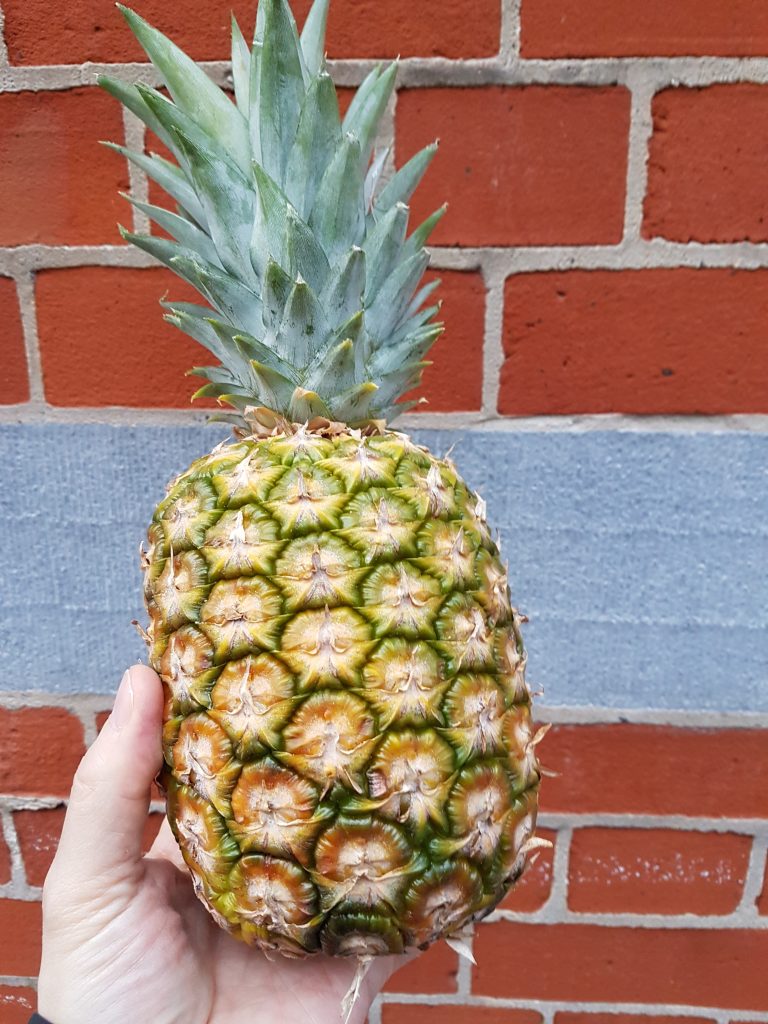 A fresh pineapple … brought to my non-tropical neighbourhood by modern transport.

Step one: Get hold of some pineapple (canned is fine)

Thanks to modern conservation techniques, both fresh and canned pineapples are widely available today. For this recipe, you may use either type (just because I almost always go for fresh, I personally decided to try with canned pineapple this time).

If you opt for a fresh pineapple, just peel it and cut it up in smaller chunks: the smaller, the better since they eventually will end up in a purée.

If you (like me) opt for a tin can of pineapples, make sure to save the pineapple juice for later when you let the pieces drain off. 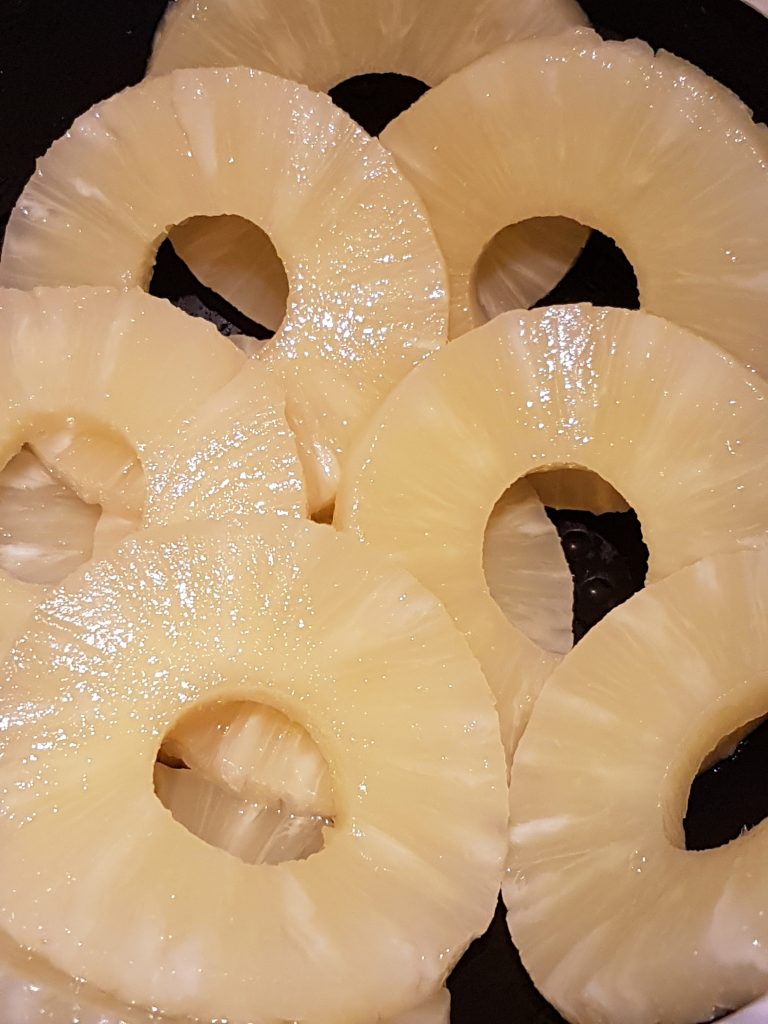 Canned pineapple works fine for this recipe! Try to find a can where the fruit is preserved in juice rather than in light syrup. 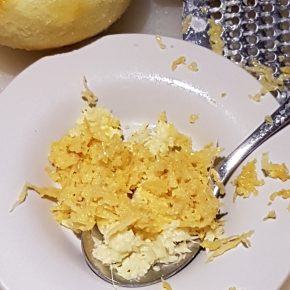 Grated ginger and lemon peel – be aware that much of the spiciness comes from the ginger!

The ginger and the lemon peel will add that particular extra which makes this frozen yoghurt stand out! If you are worried about the overall “spiciness”, consider going light(er) on the ginger!

Step three: Mix everything except the yoghurt together and make a purée

Put the pineapple pieces, the grated ginger and lemon, the sugars (ordinary caster and some vanilla) and the pineapple juice in a saucepan. Bring to a boil, turn down the heat and let stew for about 15 minutes (if you are a micro-wave master, you may probably finish it even quicker that way …).  Let cool down, then purée the mixture with a hand-held blender or similar. 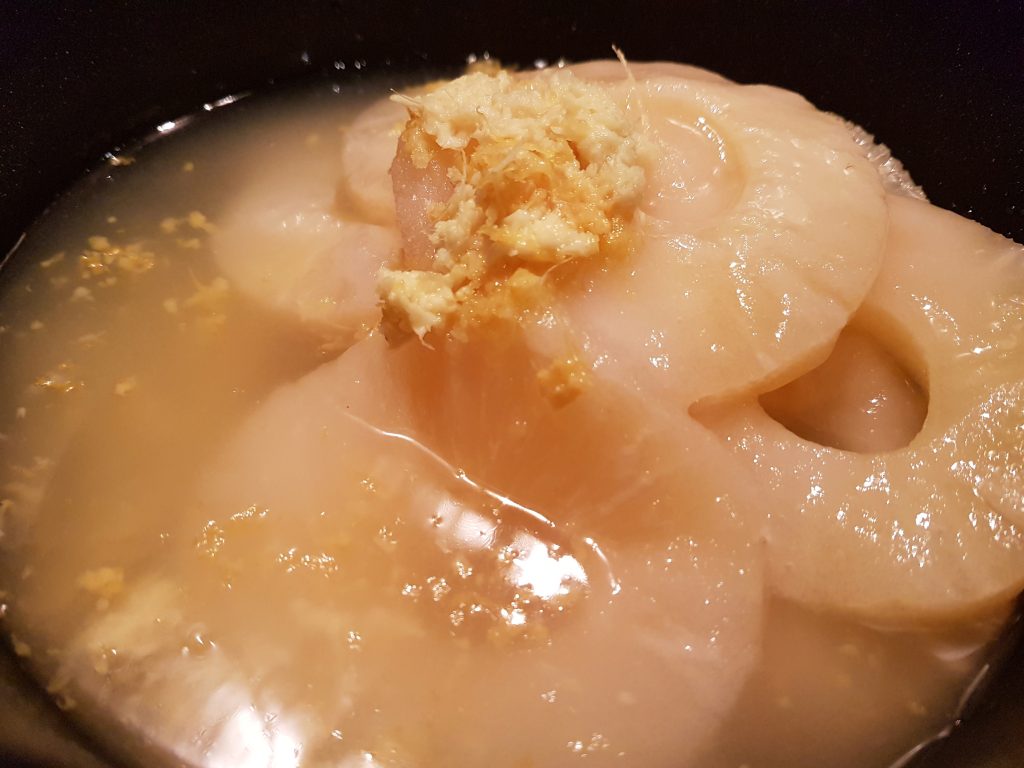 This is how it all looked before I turned on the heat. About 15 minutes later, the sweet and spicy fruit stew which had emerged was ready to be puréed.

Honouring the original recipe, I used a Greek style-yoghurt which no more than 2 % fat. Yes – it sounds almost too good to be true, right? And there is unfortunately a drawback – the final frozen yoghurt will freeze quite hard if left in the freezer. In other words – enjoy it as soon as possible after the making! Or take it out from the freezer well ahead of serving time. Or radically add more fat than what this recipe prescribes, using a decidedly fattier yoghurt (possibly even mixed with some cream).

Or do as I did – carve out a suitably sized block and give it a few seconds in the micro-wave oven! 5-10 seconds or so will make quite a difference. While the microwave method might strike you as a bit techie and/or irreverent to the great culinary tradition of ice cream-making, it is actually very effective 🙂 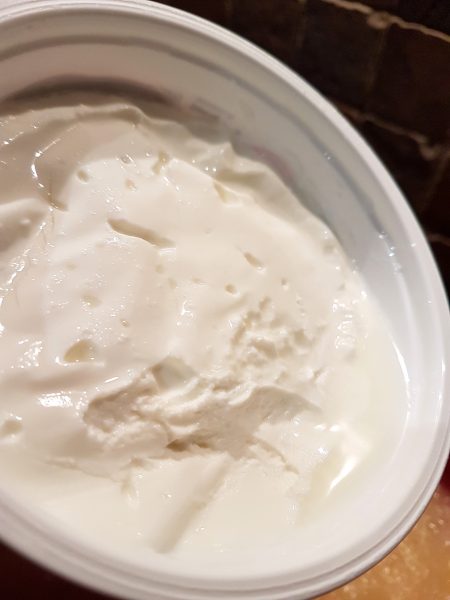 Greek style yoghurt. While it may look much more fatty, it only contained 2 %. (the original recipe even allowed for as little as 1.5 % fat). No wonder the final frozen yoghurt will freeze quite solid if left in the freezer for long.

But that is for later: Now, simply whisk together the (cooled-down) fruit purée and the yoghurt. Then churn it in your ice cream machine according to instructions. If you have no ice cream machine, still-freeze the yoghurt using your trusty, ordinary kitchen freezer. 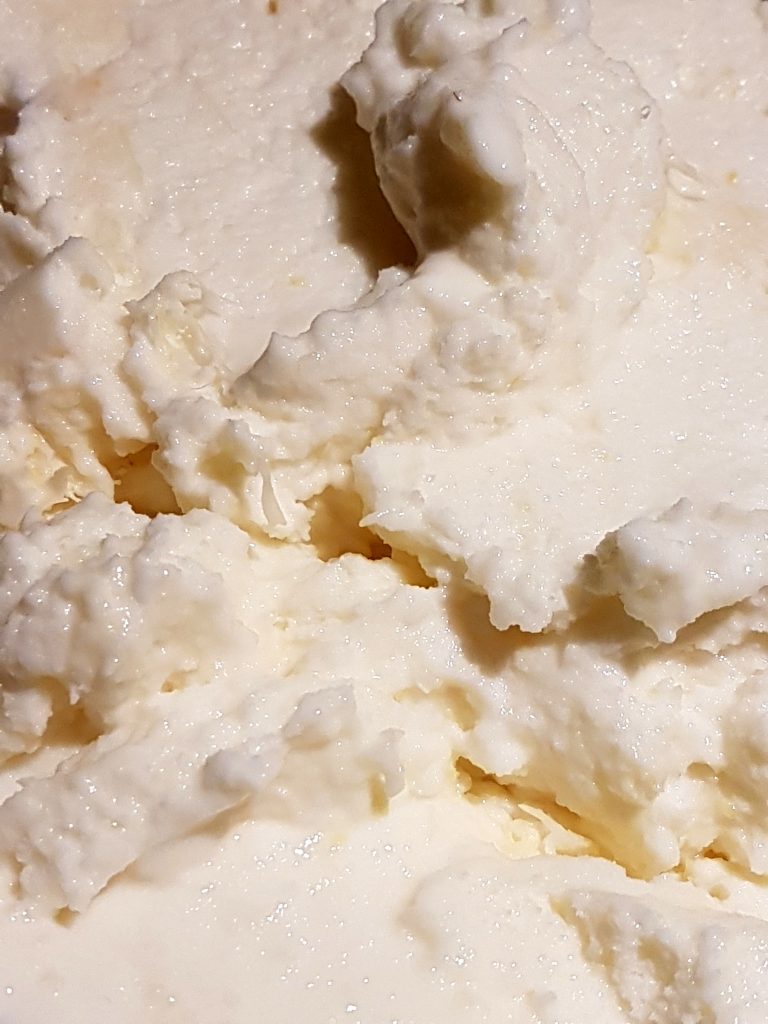 Mmm … the spicy Pineapple frozen yoghurt, freshly churned and ready to be enjoyed – with or without chile flakes 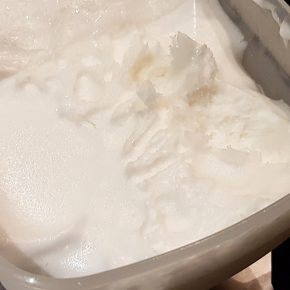 Waste not, want not. Just like with Italian meringue, left-over aquafaba meringue can easily be saved in your freezer for later use.

As mentioned, since the recipe contains very little fat and no excessive amounts of sugar, your frozen creation will freeze quite hard when stored. Let’s try some ways normally linked to improving sorbets!

Adding some airy aquafaba meringue towards the end of the churning (or, alternatively, some Italian meringue, or even [if you have no qualms about eating raw eggs] just a hard-whipped egg white+sugar) could help your frozen yoghurt keep in better general shape. How much to add? I would suggest going with about 125 ml (about 1/2 cup) per batch. If you’re whipping egg whites, one should typically be enough.

That said, the frozen yoghurt will still freeze pretty solid. However, with the additions above, you still stand a better chance of “getting through”. Having added aquafaba meringue, I still had to cut out, rather than scope up, a portion of the frozen yoghurt the next day. But the cutting went quite smoothly. And after a few seconds in the microwave oven, I could confirm that the frozen yoghurt was as yummy as I remembered it.

Before serving, you may – if you like – sprinkle some dried chile flakes over the frozen yoghurt. Not only do the flakes add to the visual touch, but they also add yet another spicy dimension to what already is a quite intriguing flavour mix! However, even without the chile flakes, this tasty frozen yoghurt certainly holds its own! 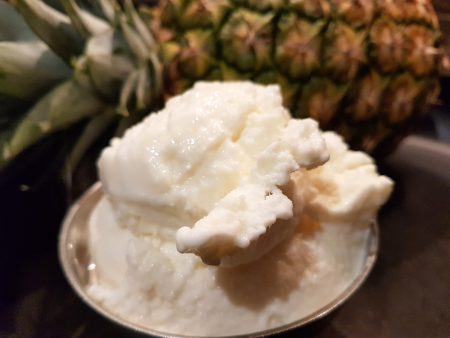 Spicy Pineapple frozen yoghurt – without chile flakes, but still a powerhouse of flavours! 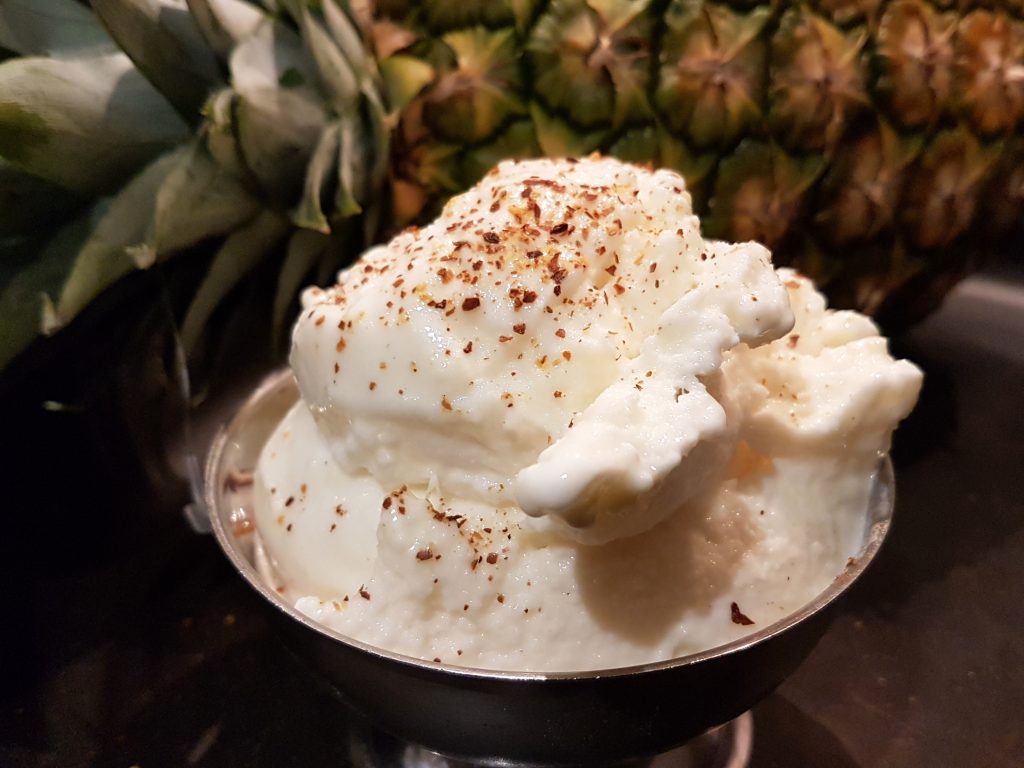 Spicy Pineapple frozen yoghurt – with a sprinkle of chile flakes: ‘spicy’ just got even spicier …

So – lots of flavour, fresh and low on fat and (relatively) low on sugar – what’s not to like? If you like fruits and are open to new, exciting flavour experiences, don’t hesitate to try this delicious frozen yoghurt!

Print
Spicy Pineapple Frozen Yoghurt
By: Anders@icecreamnation.org
A fruity, fresh and nicely spicy frozen yoghurt guaranteed to delight even the most jaded of tastebuds, courtesy of a recipe by Melanie Zanin
Ingredients
Instructions
Notes
Due to the limited fat and relatively low sugar content, this frozen yoghurt is best enjoyed quite soon after churning. If left in the freezer for several hours or over night, it will freeze very hard (although the addition of aquafaba meringue/Italian meringue/whipped egg white+sugar is bound to make it somewhat easier to cut). If you want to keep the recipe low-fat (you could otherwise use a significantly fattier type of yoghurt than the recipe prescribes, possibly even mixing in some cream), you should count on starting defrosting well in advance of serving, or give your tasty chunks of now deep-frozen yoghurt a spin in the microwave oven (about 5-10 seconds or so should make quite a difference).
Wordpress Recipe Plugin by EasyRecipe
3.5.3226
Share