In Ancient times, the subtropical Canary Islands, just off the north west coast of Africa, were known as the Happy Islands. And yet, in those days they did not even have Bienmesabe: a cinnamon-spiced almond cream. This classic dessert, believed to have Arabic roots but now firmly part of the Spanish cuisine, dates back to at least the 15th century. It still remains popular on the (now Spanish) Canary Islands. And luckily, Bienmesabe can easily be prepared even outside the islands. Time to rejoice, all almond lovers! 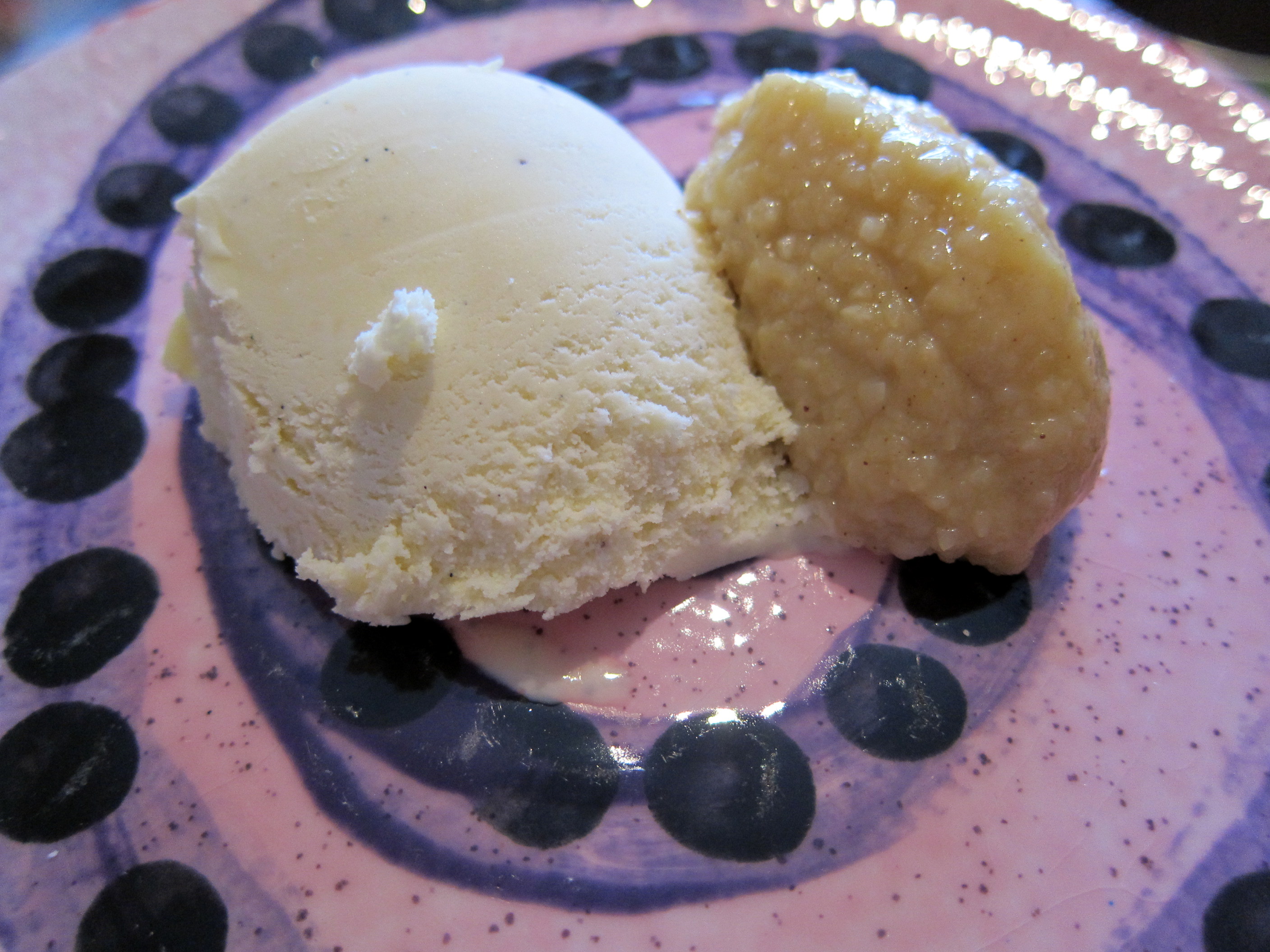 How to make the Bienmesabe almond cream

Since Bienmesabe belongs to the Spanish cuisine, I tried to find a classic, representative recipe. Having explored a few (today, there are also certain South-American varieties), I settled upon a recipe by Lisa and Tony Sierra, both passionate about Spanish food. The almond cream is not overly complicated to make  – basically, it is a matter of combining blanched ground almonds with sugar syrup, some cinnamon, lemon and egg yolks. The cream itself is relatively thick and grainy, with a very rich overall almond flavour.

As usual when it comes to almonds and nuts destined for ice cream, the almonds should be blanched and slightly toasted until golden brown.

I spent a lot of time blanching my almonds myself, which can take quite some time. If you are not overly keen on repetitive kitchen-tasks, I would strongly advice you to buy already blanched almonds and go straight for the toasting. 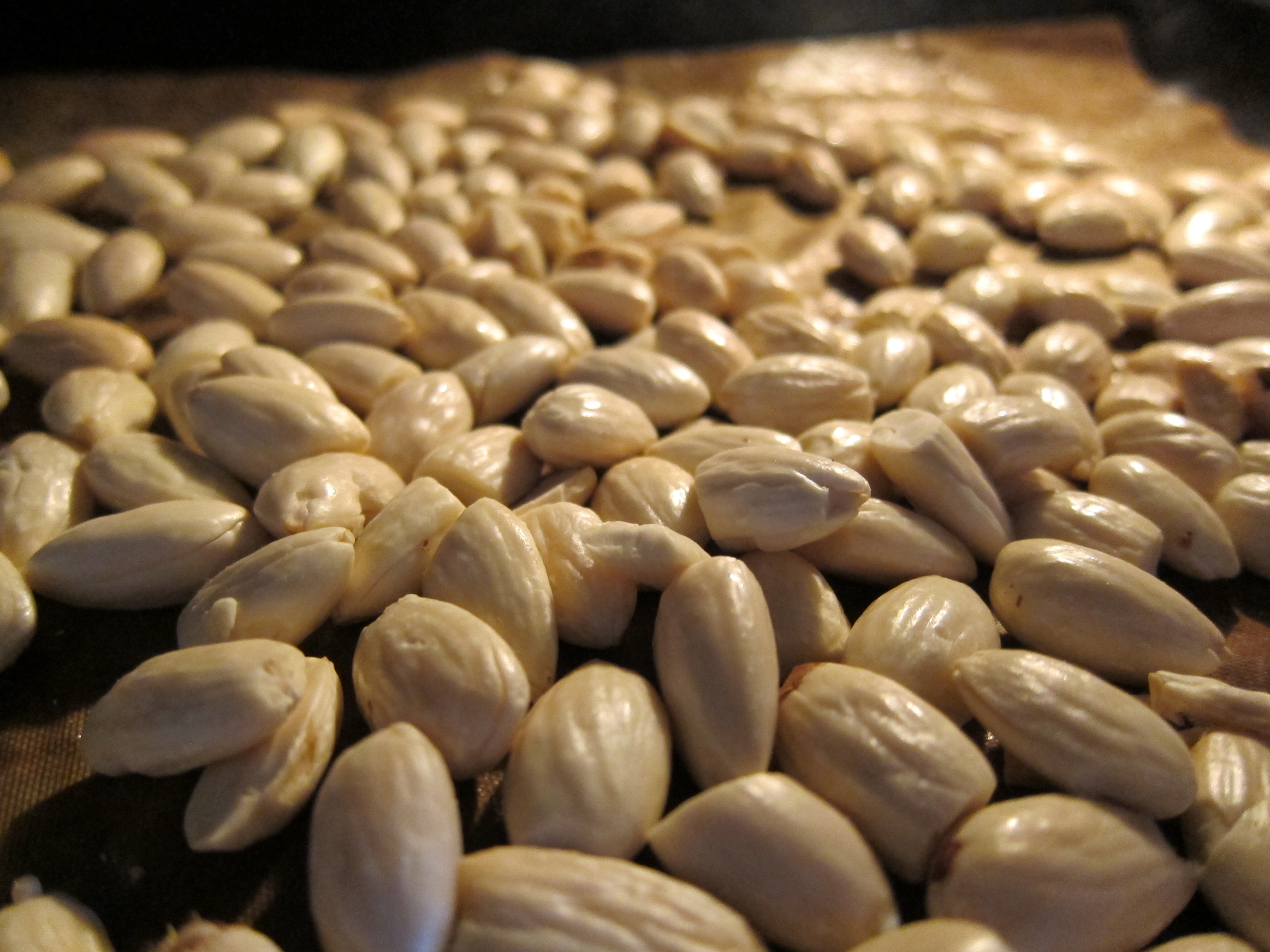 Pre-heat the oven and bake the blanched almonds until they begin to turn golden brown.

Pre-heat the oven to 175 degrees C (350 degrees F), then spread out the almonds in a single layer on a baking sheet and put them in for about 5-10 minutes. Shuffle and flip the almonds after about half the time to ensure an even toasting.

Then, grate them – the way you do it will affect the final consistency of the cream: using a food processor to grate the almonds would likely give you a somewhat more chunky result. I used a food processor and was very happy with the structure. Still, if you typically prefer everything smooth – use an almond- or grain mill to grind the almonds even finer. Remember, though, that classic Bienmesabe is supposed to be grainy.

Now, bring the water to a boil and add the sugar, the cinnamon, the lemon zest and the salt.  Reduce the heat to low and, while stirring constantly, simmer for about five minutes until the mixture has thickened somewhat. Remove from the heat and allow to cool down.

When the cream has cooled down sufficiently (leave it for 30 minute if you really want to be on the safe side), beat the egg yolks and whisk them into the cream.  Put the cream back on medium heat and (a) follow the original recipe and bring it all to a boil, OR (b) bring it to the typical custard ice cream-temperature ( i e preferably between 82-84º C /189-183ºF).  Take off from the heat and allow to cool.  If all has gone well, you should now have a gooey almond cream with a somewhat porridge-like consistency: Bienmesabe.  Store it in the refrigerator until it is time to use the cream.

The almond cream should keep fresh for at least three days in the refrigerator. That should provide sufficient time to consider how to best make use of it in the context of ice creams (read on). 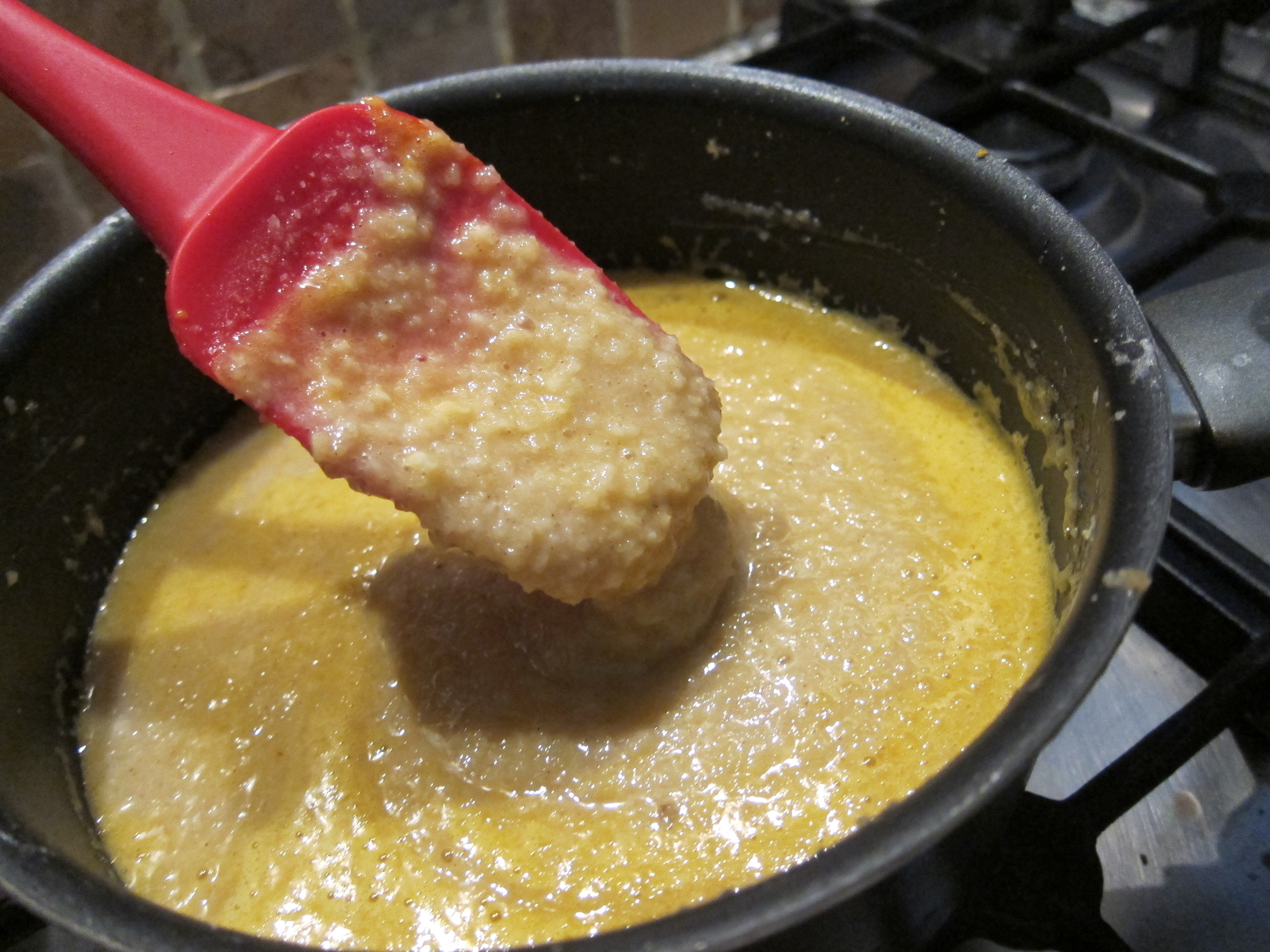 Yummy! The egg yolks have just been added, so this is really the last leg of the preparations.

Bienmesabe’s classic companion is vanilla ice cream. While any of the ice cream bases (including the specific vanilla recipes you will find by following the link) would do, I decided to go for a custard-based ice cream,  somewhere in between the French and the Italian main types. Given the overall sweetness brought by the Bienmesabe, I also decided to cut back a bit on the sugar when preparing the ice cream base.

Otherwise, making the vanilla ice cream follows the typical, classic custard-way.  In short, this amounts to whisking together sugar and egg yolks, carefully mixing that with pre-heated dairy + vanilla, then thickening the custard by bringing it to pasteurising temperatures, cooling it down and finally churning the ice cream (remember to take out the vanilla bean before churning). 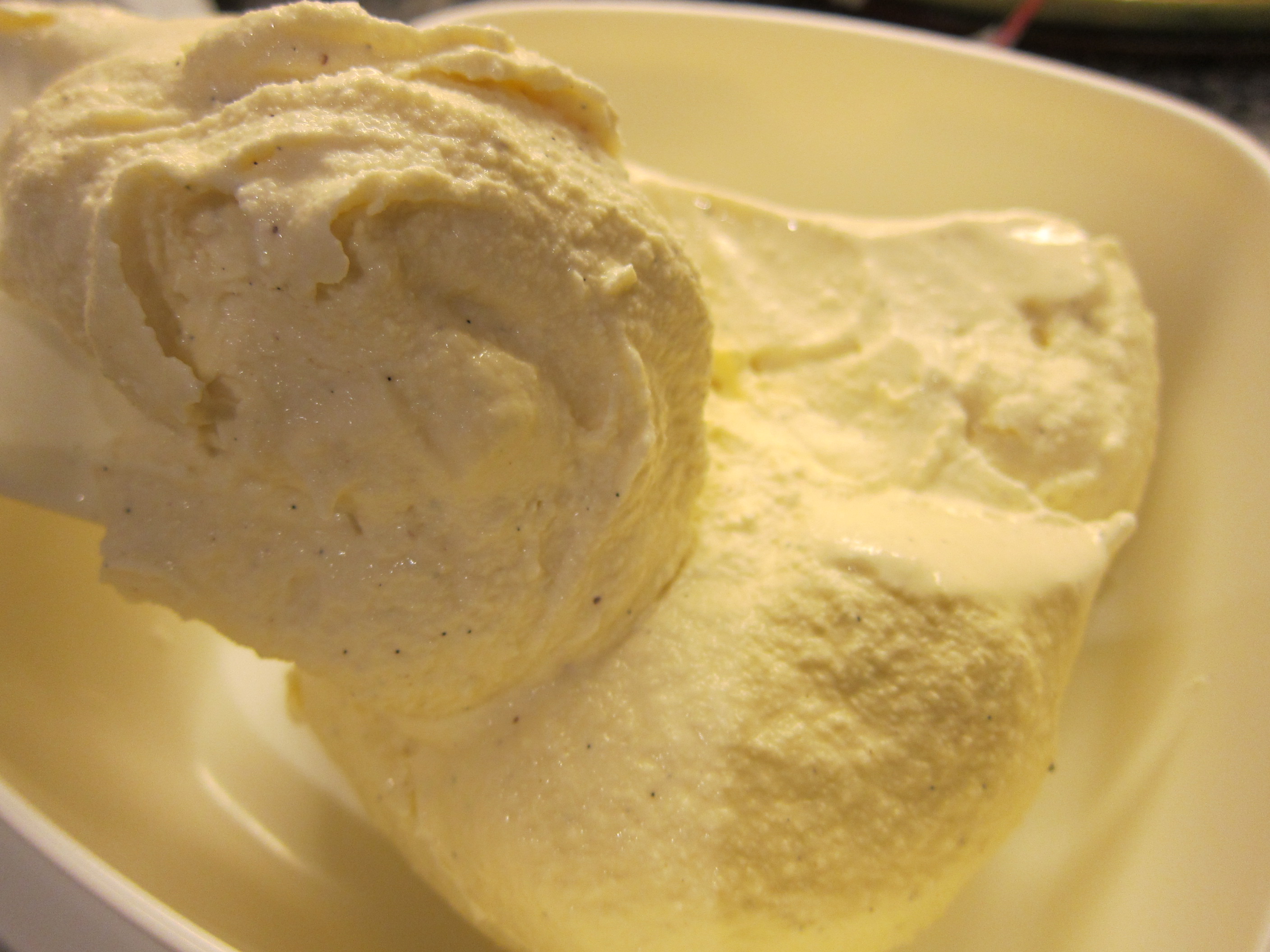 While one of the nicest ways of combining Bienmesabe with vanilla is to serve them side by side, you could also combine the two into an integral flavour – read on! 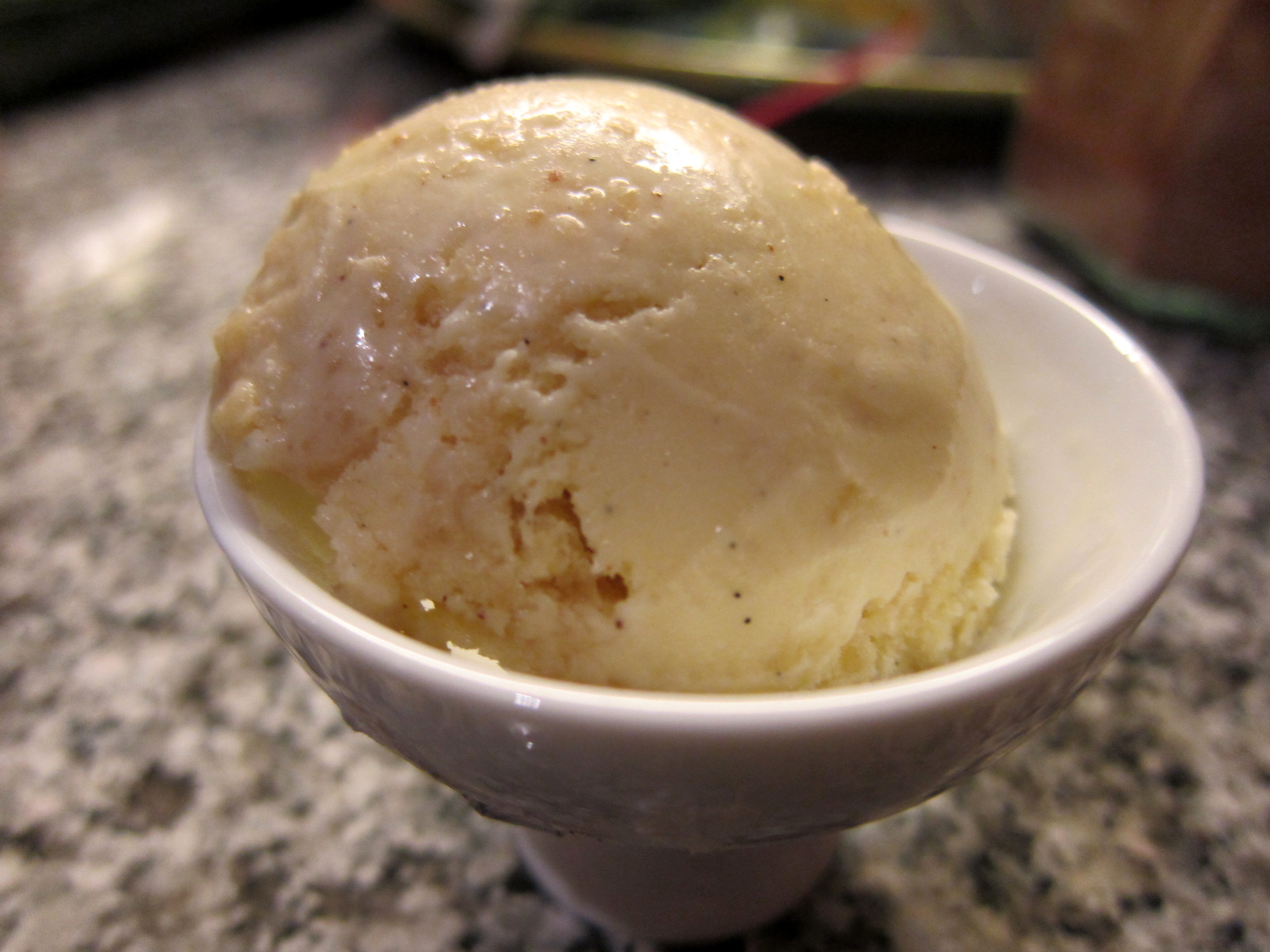 Bienmesabe ice cream (the almond cream rippled into the vanilla ice cream base). And yes, the ripple effect could admittedly have been more prominent. I’ll work on that for the next batch:-).

Better then to combine the two towards the very end of the process  – and then by mixing in the almond cream by hand.

Begin by churning the vanilla ice cream until it has begun to come together but still is  ‘too soft’.  Scoop about half of this ‘almost-ready’ ice cream into a freezer-safe container. Now scope a suitable number of scopes of Bienmesabe cream [I leave the exact amount to your discretion and personal preferences] into the same container, then add the remaining ice cream. Using a knife or similar, carefully ripple together the ice cream and the almond cream (just make a few turns, as the almond cream will ‘dissolve’  the more you swirl).

– Vanilla and Bienmesabe side by side

This would seem to be the most common type of presentation, where the main choice is whether to serve the almond cream cold or warm. This is a matter of personal choice and I invite you to experiment with what you prefer. Siding with my wife on this matter, the nice contrasting effect does become more pronounced with warm Bienbesabe. 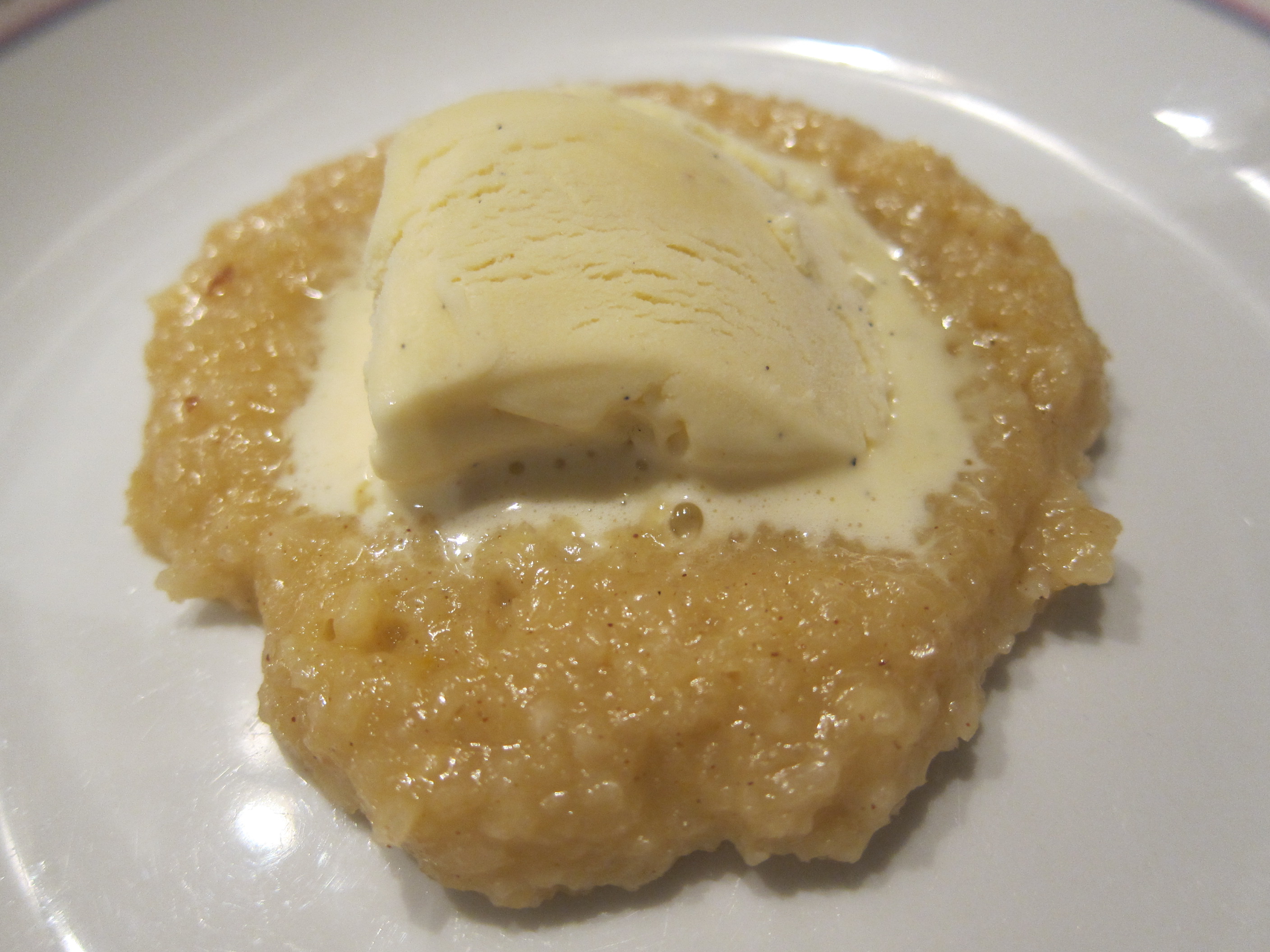 The peculiar and rich almond flavour, with its shades of cinnamon and lemon, hints to the ancient origins of this dessert and it is easy to understand its enduring popularity.  Bienmesabe really comes across as a very distinct member of the family of almond desserts.

It is easy to see why the combinations with vanilla ice cream are so popular – the flavours go very well together, and the vanilla provides a mild, smooth and pleasantly contrasting counterweight to the rich almond cream and its grainy-chunky texture.  While all versions were nice, I particularly liked the combo with warm Bienmesabe together with a scope of vanilla.

As Bienmesabe is so easy to make, I would advise all almond lovers (and ice cream lovers in general) to give this tasty, gooey creation from the Canary Islands a try!