Want to try an ice cream for heroes?

Edmund Hillary – legendary mountaineer who, together with his sherpa Tenzing Norgay, was the first human to ever climb the top of Mount Everest – accomplished many impressive feats in his life. Long before the age of power bars, he even created a tasty snack to help him through his mountain expeditions. And Edmund Hillary’s snack is what we will use to make our Mount Everest ice cream! 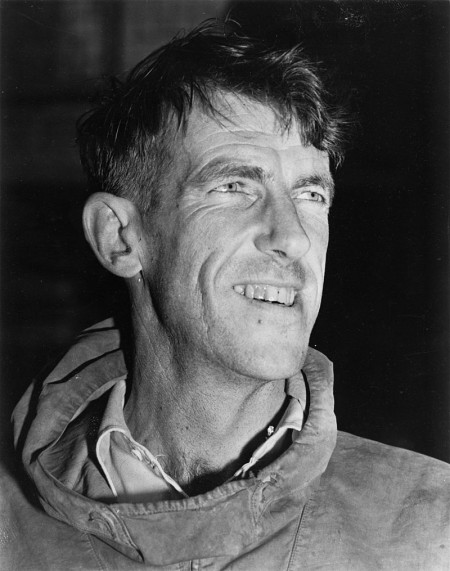 Edmund Hillary, intrepid snack-inventor, explorer and possibly the world’s most famous mountaineer. Hillary and his sherpa guide Tenzing Norgay were the first humans ever to reach the top of Mount Everest – the highest mountain on Earth – in May 1953.

Easy to make, tasty and gives plenty of energy: three important key aspects of food for humans of all times. However, for those set to accomplish heroic feats, such as climbing gigantic mountains, these aspects can determine the difference between failure and success.

As the story goes, Hillary used this handy, easy-to-make snack to power up on the way up the mountain: there was simply no time to stop and cook anything, and the high energy content helped the courageous mountaineers to pull forward despite the taxing conditions.

So where did I find this story? A good friend of mine recently gave me an entertaining cook-book of sorts, listing various historic recipes. Unfortunately, the book is in Swedish (only) and I cannot guarantee the historic accuracy due to the lack of any listed further sources. Still, since Hillary’s conquest of Mount Everest is (historically speaking) a fairly recent event, let us assume that the book got that part right, shall we?

First, chop the nuts and start by simply mixing all dry ingredients together in a bowl. 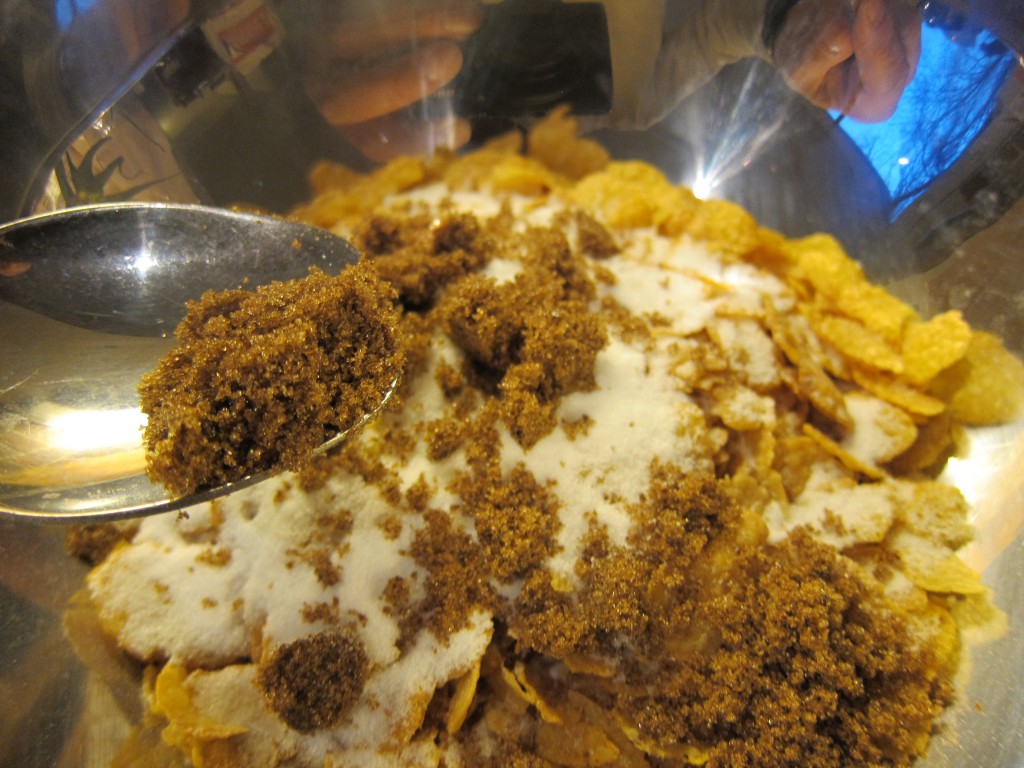 As you can see, the “structural part” of this snack is corn flakes. The sugar and the nuts will, however, soon turn it into something more than that! 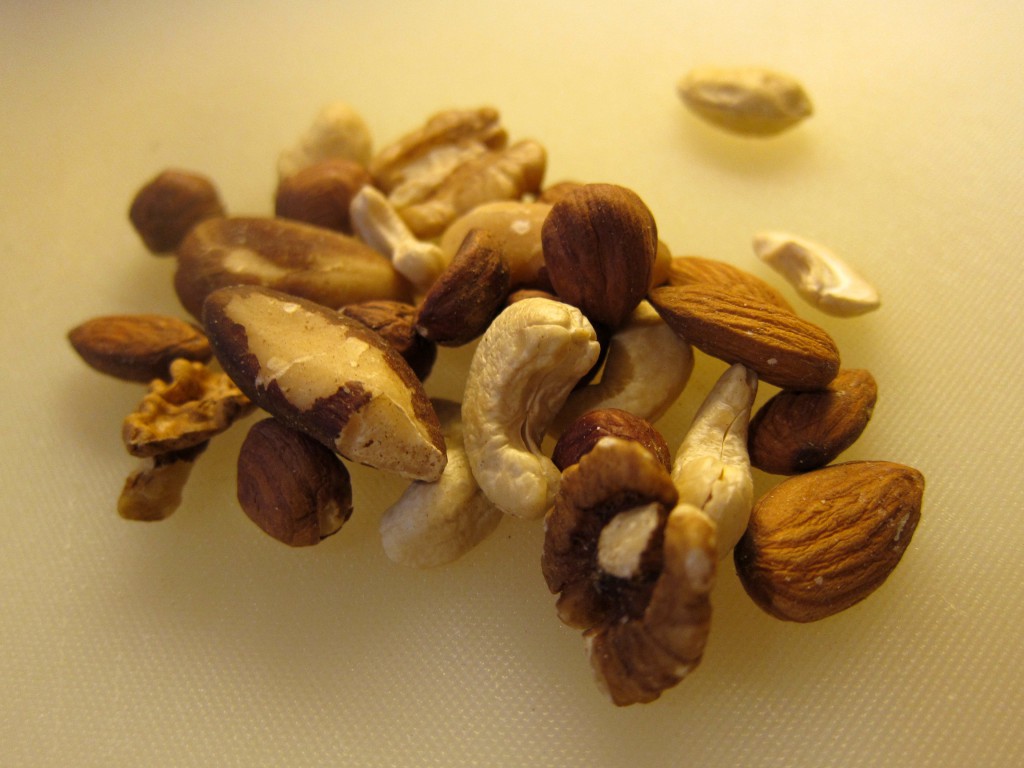 Use whatever assorted nuts you like, chop them and add them to the rest of your dry ingredients!

Next, crush the corn flakes and make sure all dry ingredients are well mixed with each other.

You can, of course, crush the corn flakes even earlier. I used my potatoe masher and got to work once all the dry ingredients were in the bowl.

Now, melt the butter and add all the dry ingredients. Stir and continue to heat until all the sugar has melted. 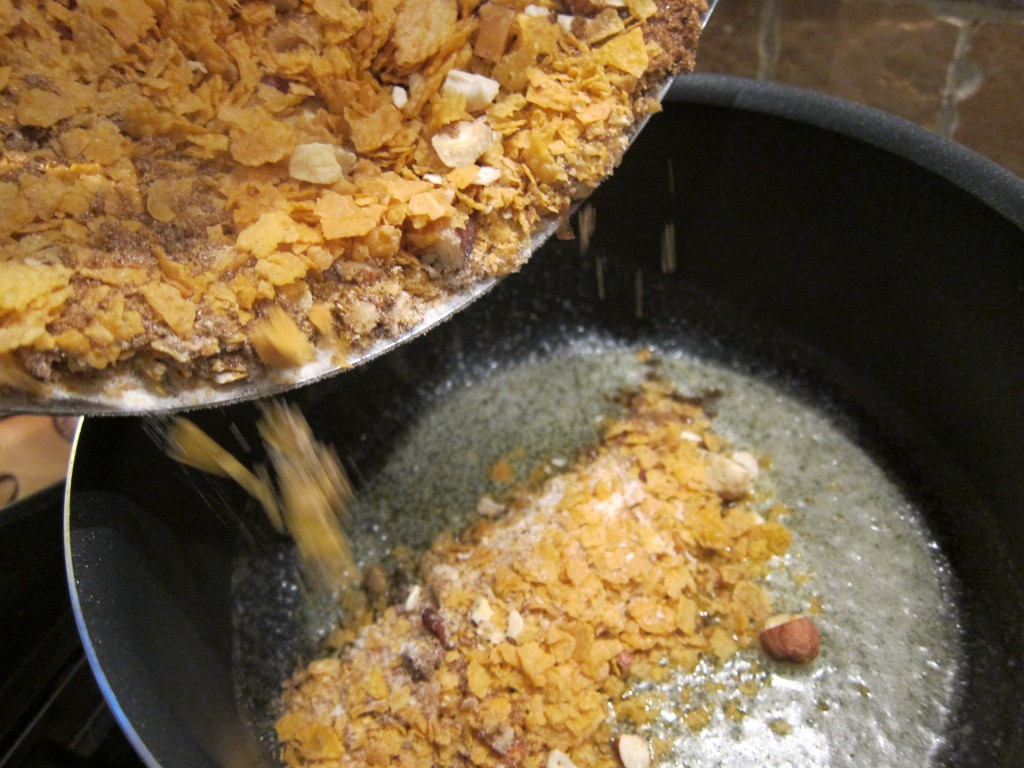 Once the cooking is done, pour the resulting paste-mix on a bakery paper and let cool down. Before using it as the topping we seek, let it preferably also chill for at least a couple of hours in the refrigerator.

By the way, if your mix turns out to be more of a collection of crumbles than an early power bar paste, don’t worry! As we want to use the snack as ice cream topping, the crumblier, the better! 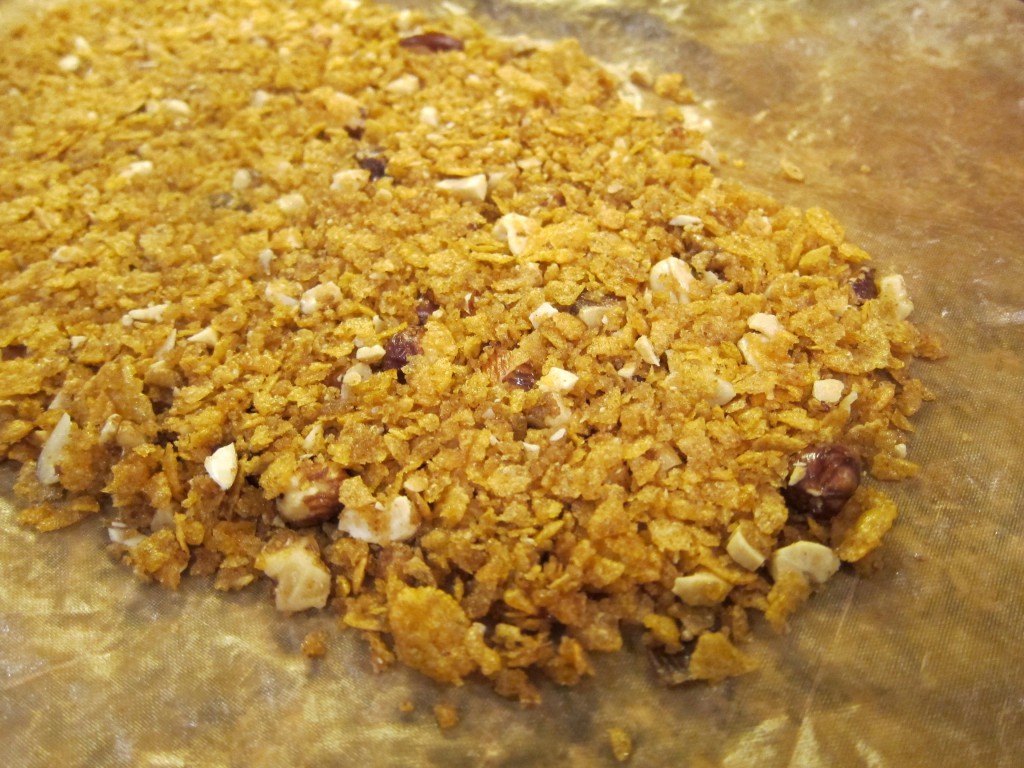 My “snack bar” also turned out to be very crumbly already from the start (did Hillary use yak-butter with extra holding power? Or should the recipe simply contain more butter and/or sugars from the start?). This, however, meant that the result could be used as a perfect ice cream topping already from the very start!

The Vanilla ice cream – go with what you like best

No time or inclination to make your own vanilla? – Simply buy some good quality vanilla to your liking and add the crumble!

For those of us who tend to make the ice cream ourselves, I’d suggest to use any of your favourite vanilla recipes! For this post, the one I used is a slightly adapted version of the “slimmer vanilla’ gelato: a straightforward custard base easily made with a handful of egg yolks and more milk than cream.

“All in at once!” – doing custard bases the fast and modern way

In order not to bore you with the exact same procedures used before, I made the ice cream using the modern and fast way: all ingredients were simply put together in a sauce pan from the very start and then brought to the nappe-stage (=when custard ice cream bases typically have reached their ‘ice cream-ideal’ temperature and texture, and should be taken off the stove and chilled). In contrast, the traditionally method of making ice cream custard often involves a preliminary stage where the egg yolks are mixed with the sugar and then slowly tempered (usually by slowly letting hot milk trickle down in the egg/sugar mixture during continuous whisking). This tempering is supposed to make the egg yolks less prone to coagulate and end up as scrambled egg in your custard.

As widespread and traditional as the traditional way is, I have personally never really noticed much of a difference when it comes to the results: if your ingredients – notably the eggs – are fresh and sound and you don’t fail miserably when it comes to continuously whisking and checking the temperature of your custard base, you should be just fine also with the modern method!

So, to recapitulate the steps in more detail: Mix all ingredients, including the egg yolks, together in a sauce pan. If you prefer to use a vanilla bean instead of vanilla powder, do so! Just remember to split it open and make sure to scrape off and add to the mix all the small vanilla corns found within (do add the split beans too – they add to the flavour: you can keep them in the custard also during the chilling stage. Just remember to take them out before you churn the ice cream). 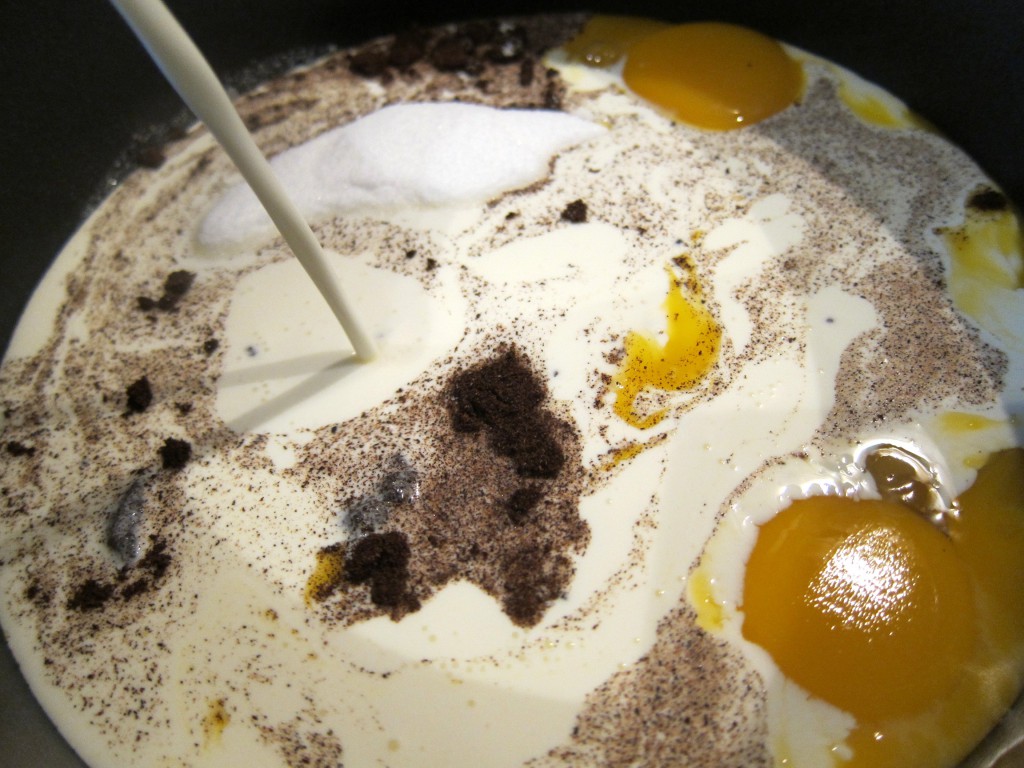 On low- to medium heat, bring your ice cream base to the nappe-stage (about 82-84º Celsius /189-183 ºF). This is, by the way, also the stage when you should be able to draw a line through the custard coating the back of a spoon (or equivalent) that stays: the so-called Spoon Test. For added certainty: use a thermometer! And remember to whisk all the time – you don’t want to end up with scrambled eggs!

When the base has finished cooking, let it cool down as quickly as possible and preferably chill a few hours or overnight in your refrigerator before churning it in your ice cream machine.

No ice cream machine? Chill the ice cream in the fridge to start with anyway, in order to best prepare it for the freezing. Then, still-freeze the ice cream using your freezer: check this post for good advice on how best to do it!

The final result: Reach for the top! 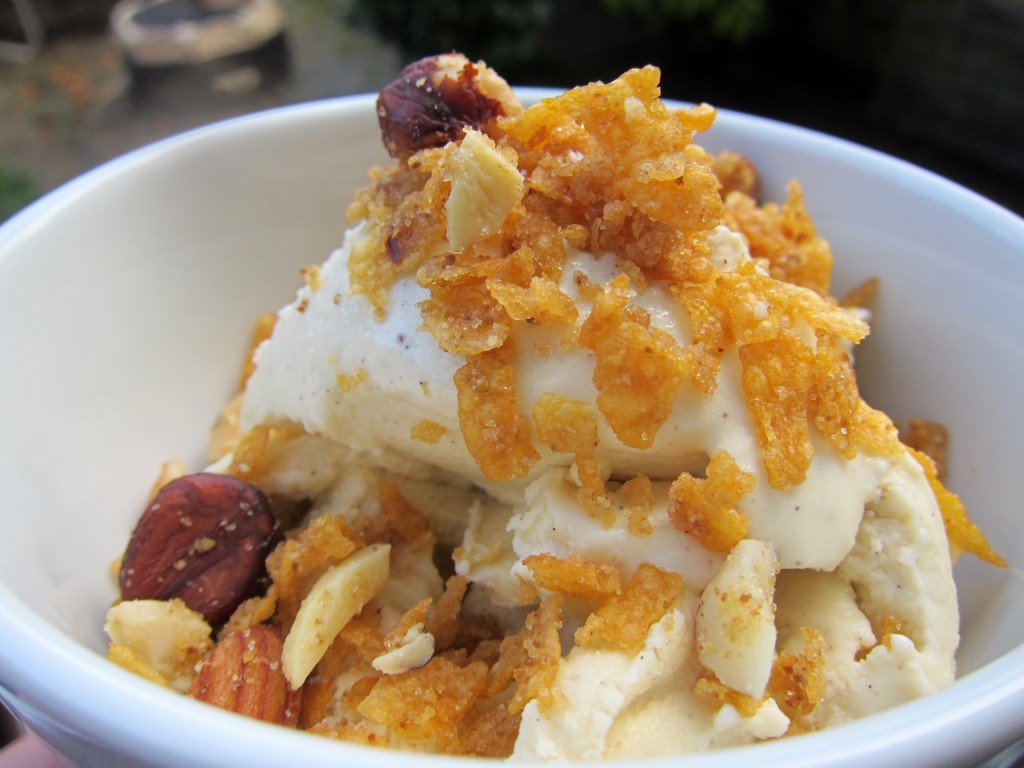 Do you feel skeptic about the plain ingredients and the extraordinary simplicity of this topping? You are not alone – I actually wondered myself if this super-easy-to-make mix of slightly buttered and sugar-coated nuts and crushed cornflakes really could be something. But as it turns out, the crumbles and the delicious nuts combine into a great topping, with a flavour that transcends the mere addition of its constituent parts.

Enjoying the sweet crumbly pieces of Hillary’s snack may be the closest some of us are likely to come to the top of Mount Everest. Then again, this ice cream is quite a delectable substitute for the actual climbing (and – if enjoyed in moderation – much less likely to get you killed 😉 ).