Say “Santa Clause” today and most people probably start thinking about a jovial and overweight Santa dressed in red.  Although culturally dominating these days, this Santa-image has actually a rather short history – stemming from Coca-cola ads in the 1930’s, to be exact. Follow me further back in time instead, and meet Santa’s old heathen  ancestor – Tomten!

Tomten, like most folkloric creatures, differed in appearance depending on region (in a certain part of Finland, people for example believed he only had one eye, just like a cyclop!).

The typical Swedish Tomte looked like a small, elderly man. Usually sporting an impressive white beard, grey woollen  clothes and a somewhat wry general disposition, Tomten acted as a general helper on the farm. Particularly prone to look after the animals, he was also making sure the humans did their part for the common good of  the household – lazy or neglectful persons  might  even receive a beating from an angered Tomte. In severe cases,  Tomten might even abandon a farm completely, usually foreboding  its imminent fall into complete disarray.

The closest folkloric equivalent to Tomten in Anglo-Saxon culture would probably be the Brownie. Another term sometimes encountered is House gnome.

To express gratitude and keep Tomten happy, every Scandinavian farmer in their right mind put out a bowl of  Christmas rice porridge on Christmas Eve, a tradition likely going back to the offerings of pre-Christian, pagan times. 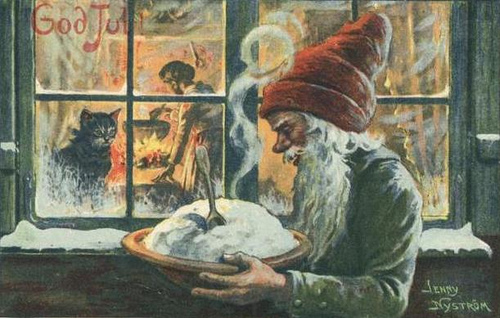 To this very day, this Christmas rice porridge remains a mandatory part of most Swedes’ culinary Christmas preparations. Some like to eat it warm, others prefer it cold. Most agree, however,  that it should be served with milk, and sprinkled with cinnamon and sugar.

Rice ice cream is certainly no new invention either. The Italians, for instance, have done it  (Gelato Di Riso) for centuries. And they have also some great rice grains, like Arborio,  to use for it too.

Looking at some rice ice cream recipes with Swedish eyes, I was however quickly struck by the many similarities with Swedish Christmas rice porridge when it came to the ingredients! The details on the preparations could differ, but basically almost all recipes seemed to boil down to these two core steps – First, make a rice porridge. Secondly, mix the rice porridge with a (standard) ice cream base and churn it.

So … first of all – the rice porridge. While mainly sticking to a traditional Christmas rice porridge recipe here, I took a cue from several of the rice ice cream recipes I had seen (thanks in particular to one by Pamela Sheldon Jones!) and boiled the rice grains exclusively in milk. The amount of sugar added was also higher than for  “standard” Christmas rice porridge (but we all know that the sensation of sweetness is diminished by cold, so no big surprise there).

True to the traditional recipe, a stick of cinnamon accompanied the rice into the cooking pot as the only additional flavour (beyond dairy, sugar and some salt, that is). 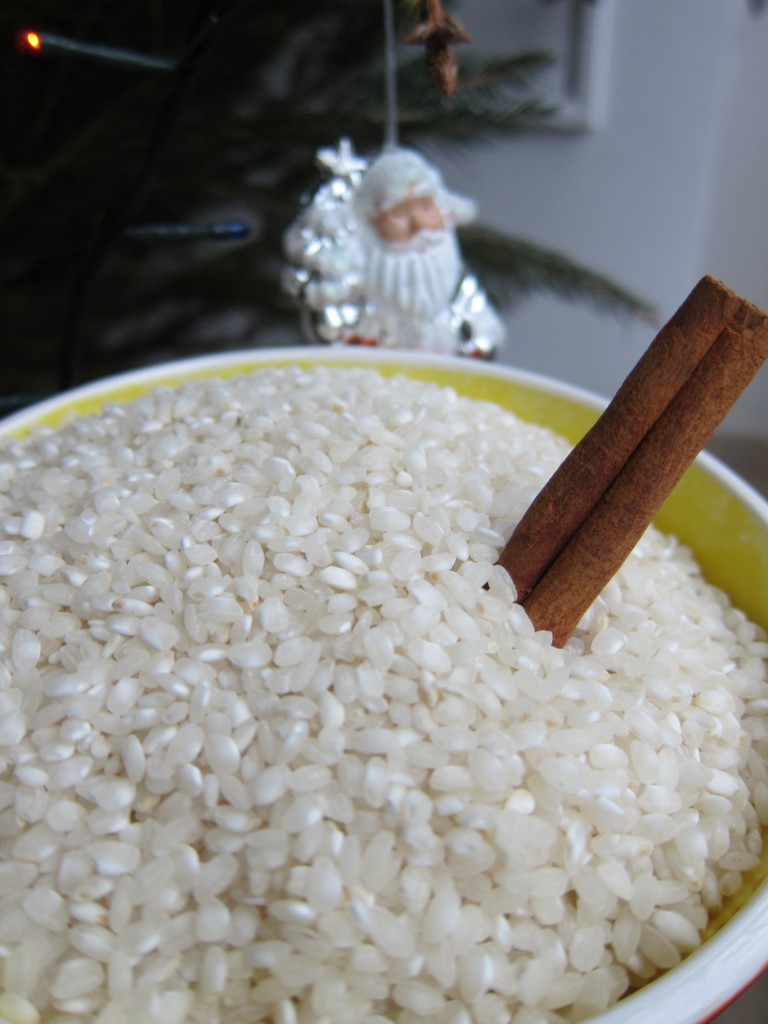 Cooking the porridge to a state where the grains are sufficiently tender takes about 60 minutes (keep it simmering, and keep a lid on!). During this time, it is advisable to stir regularly, making sure that no porridge gets stuck (and burnt) to the bottom. Also, do add more milk in case the porridge looks about to dry out. After an hour, the result should look about as moist as below.

And to connoisseurs of Swedish Christmas rice porridge, I can report that  this “ice cream base-porridge” tastes almost exactly as the traditional one, only sweeter. 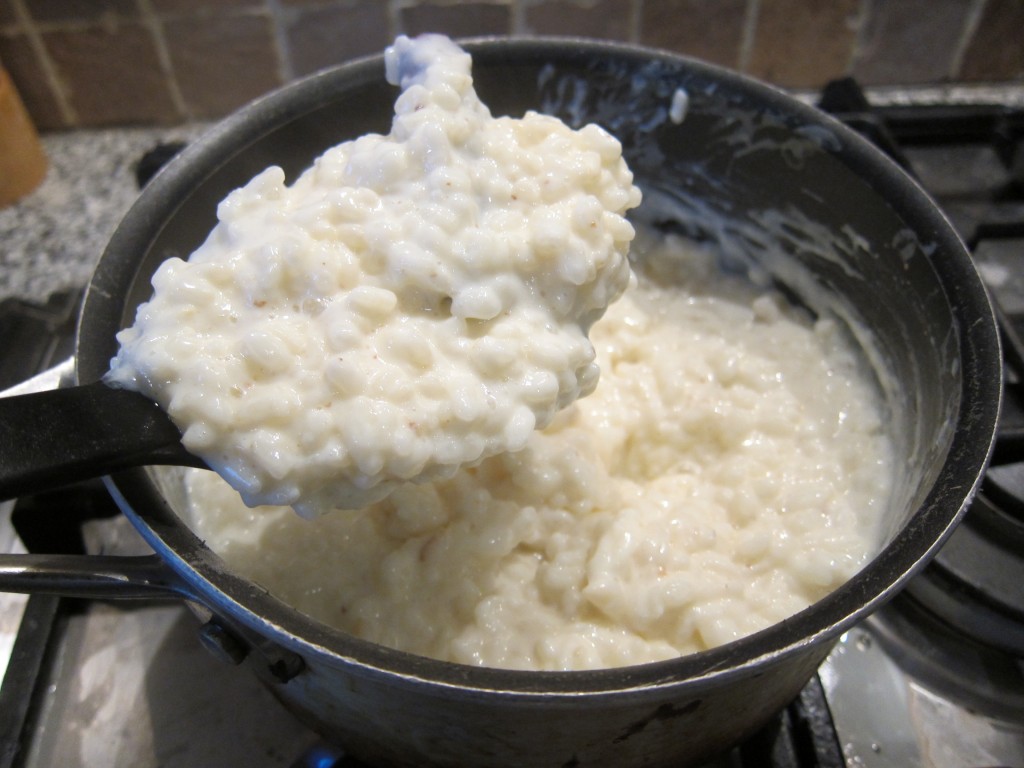 After having prepared a rather standard custard ice cream base (read more about those here), both that base and the rice porridge were left to chill for a few hours (Yes, I was too curious and impatient to wait until the following day). Following this, the cinnamon stick was removed and the chilled rice porridge was gently beaten together with the custard base. Being curious about how the rice grains  (whole) would taste (and partly also worried about it …) I had a light go at the rice porridge with a mixer before this mixing-together. The level of puréeing probably only amounted to about 50 percent or even less. Obviously, you could calibrate the level of puréeing to your personal preference – for the record, my rough 50/50 choice turned out very nicely. 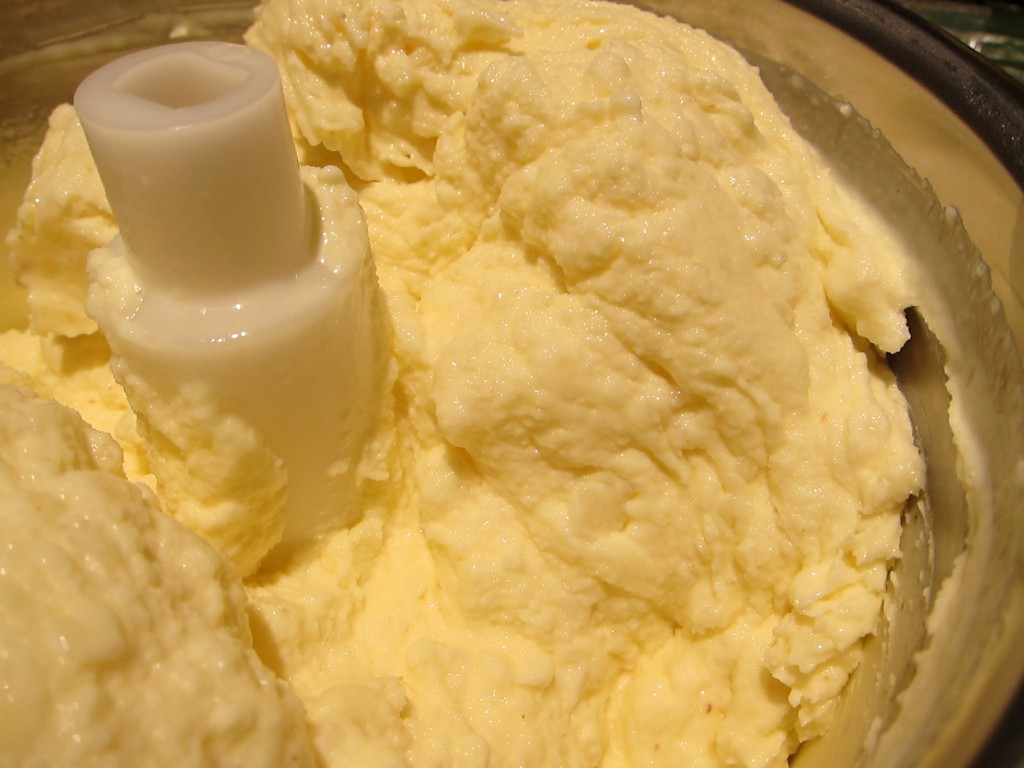 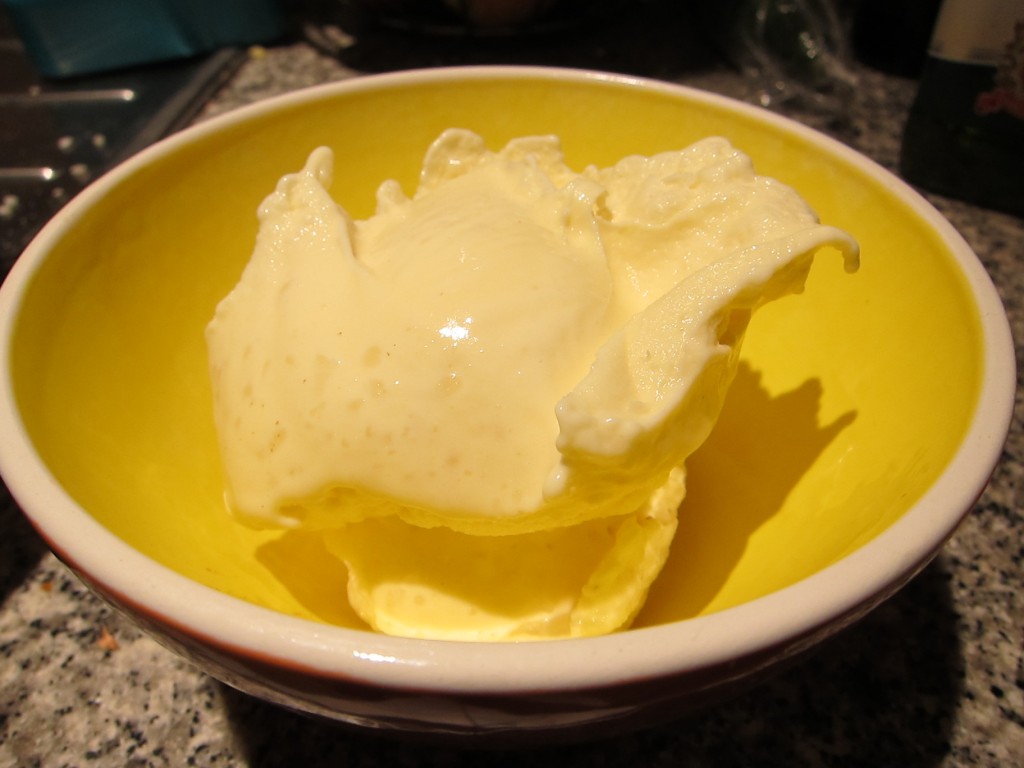 And so … the churned Rice ice cream! Quite beautiful to behold, and with a sufficient amount of rice grains still there to make an impact on texture and taste. Indeed, it is a strange sensation – the grains are there, they are noticeable and they linger a bit when the rest of the ice cream begins to melt in your mouth. Still, they managed to remain both deliciously soft and somewhat chewy (in a pleasant way) at the same time. Luckily, my worries about having to face rice grains unpleasantly frozen rock-solid turned out to be unfounded.

But – be warned: this is unfortunately an ice cream which will freeze pretty solid if left in the freezer for a while! In other words – enjoy it fresh out of churning or remember to take it out from the freezer well in advance before serving it (likely about +30 minutes or so). If you are impatient like me, you might also want to speed up the process a bit with the help of a micro wave oven (if you care about the quality of your ice cream, just remember not to try to re-freeze something you have  micro-waved).

Sprinkled with the obligatory ground cinnamon and some caster sugar, the ice cream turned out to be close to a spitting image of its inspiration – the Christmas rice porridge.

The kids quickly overcame their hesitation – happily surprised, they concluded  that “it really tastes like Christmas rice porridge … but as ice cream!? Yum!”  I could not dream of a better review:-) 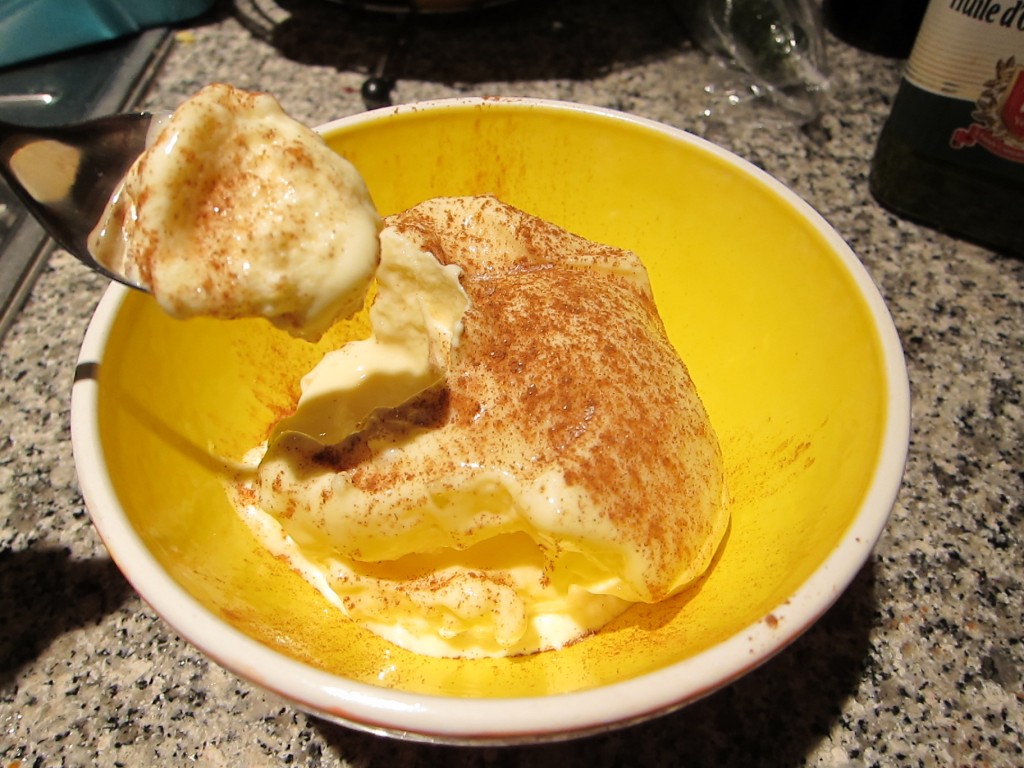 Rhyming to the Christmas porridge

Being called upon to come up with on-the-spot rhymes is not only a matter for hip-hop artists. In Sweden, particularly on Christmas Eve, many families put a peeled almond into the Christmas porridge. The lucky (?) person who later finds this almond in his or her portion is then required to quickly deliver a “porridge  rhyme”, to everyone’s enjoyment. In case there are no allergy issues, this is something you might want to try when serving this ice cream:-)

5.0 from 1 reviews
Print
Swedish Yule Rice ice cream
A somewhat Scandinavian take on Gelato di riso (Rice gelato), prepared on what is basically a classic Swedish Christmas rice porridge recipe. Please note that this recipe makes for quite a lot of ice cream - you may want to scale down the ingredients to half in order to bring down the volume towards 1 litre (about 4 cups).
Ingredients
Instructions
Notes
This is unfortunately an ice cream which will freeze pretty solid when left in the freezer for a while! It is therefore best enjoyed fresh - enjoy it straight after churning or at least the same day you have made it. If you have to put it in the freezer for longer, just remember to take it out to soften quite some time before serving it (likely at least about +30 minutes or so). If you are impatient, you might like to speed up the process a bit by putting the ice cream into a micro wave oven. Just remember that it is seldom a good idea to try to re-freeze ice cream once it has began to melt down ... something which holds particularly true for micro-waved ice cream;-).
Wordpress Recipe Plugin by EasyRecipe
2.1.7
Share