Plums! How I adore these lush, tasty fruits!

More than just delicious and tasty, they also contain impressive amounts of vitamins, fibres and antioxidants so what’s not to like? Where I live, the season was drawing to its inevitable close, but I went shopping and found exactly what I needed: 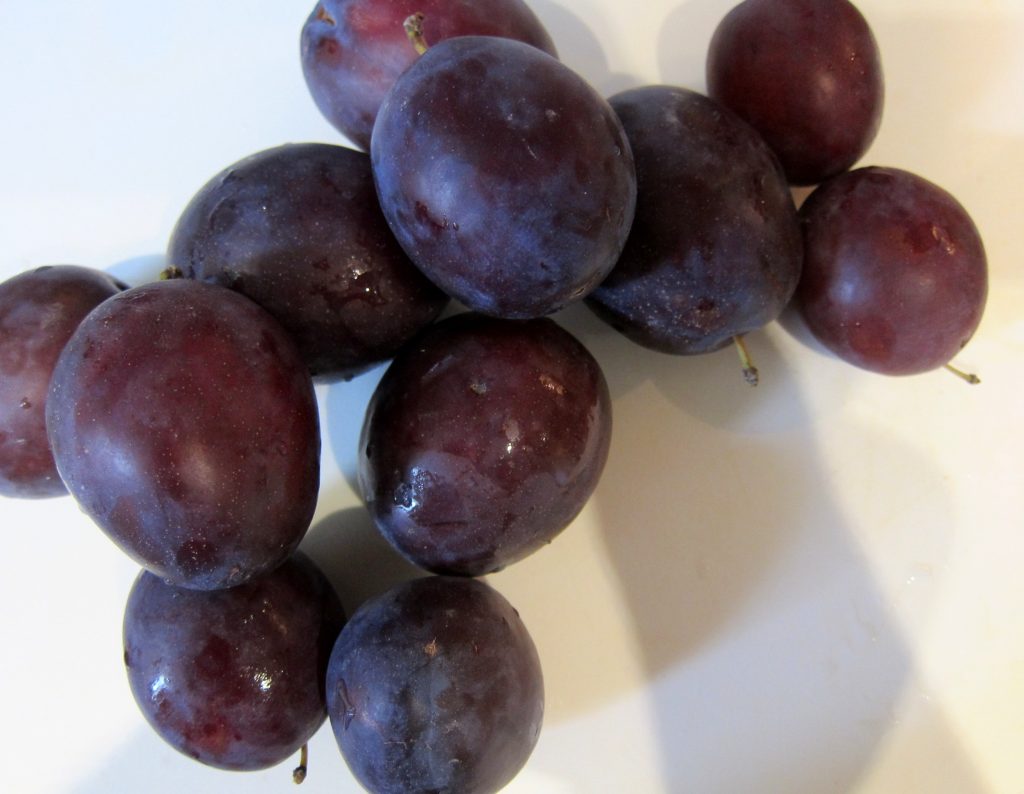 The versatile plum lends itself perfectly to American/Philadelphia style-ice cream making and if that interests you, take a look at this recipe from the archives!

Here, however, we will combine the lush fruits with a Sicilian gelato-style ice cream base, using reliable Arrowroot as our starch. Yes, there will be some cooking on the stove, but take heart: Sicilian gelato is typically much more forgiving than traditional Italian/French custard bases: you’ll be alright, I assure you! 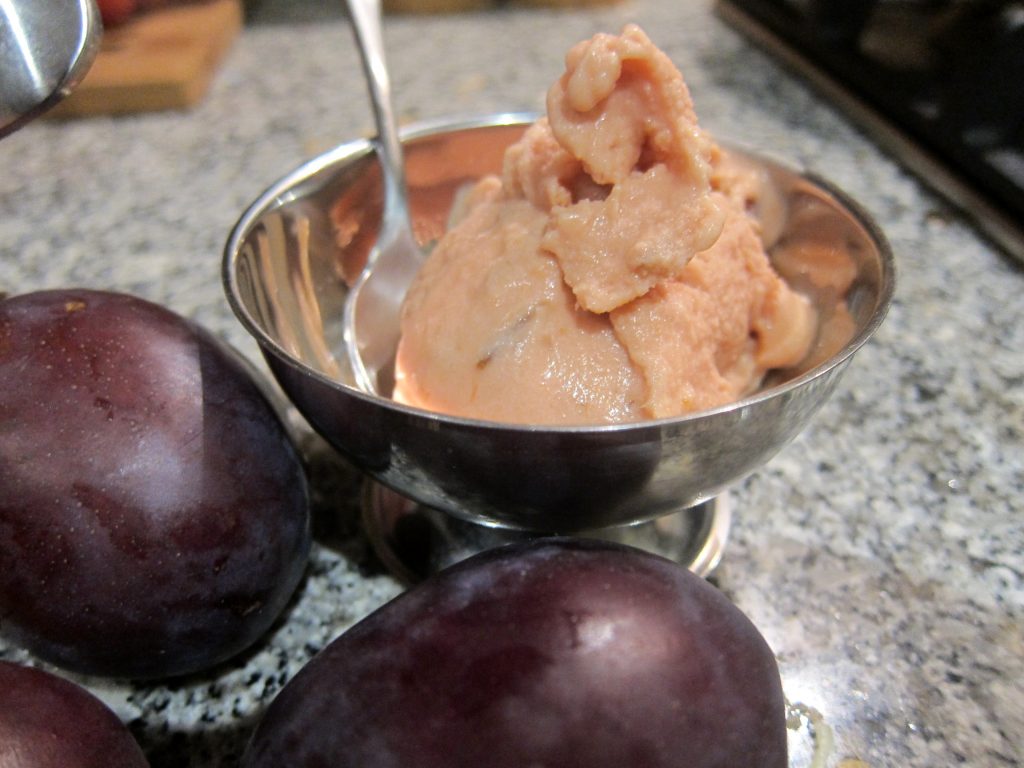 Begin by washing, cutting, peeling and slicing the plums. Mix with 100 ml (about 0.4 cup) sugar and some lemon juice for contrast and puree in a food processor or by using a mixer. Put aside for now, because the fruit will go into the base only at a later stage. And yes – puree the plums with their skin! That’s where all those nice anti-oxidants are located, so we could not like to miss out on having them in our ice cream, would we? 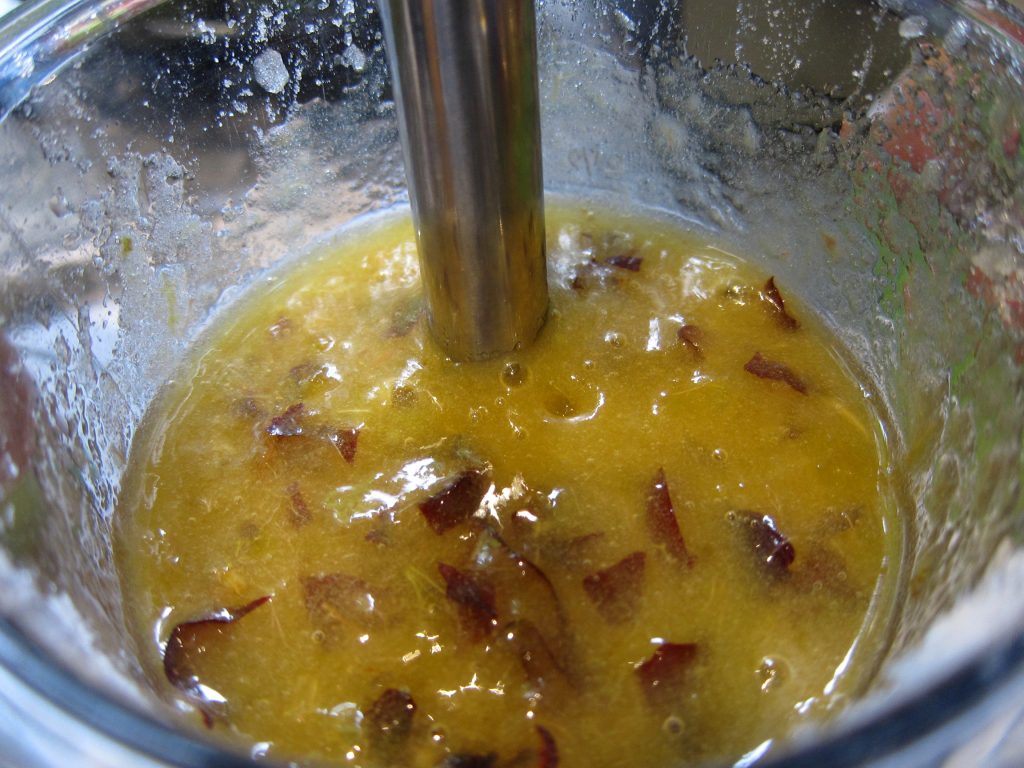 When making the puree, remember not to exclude the healthy skins of the plums!

Whisk the cold milk together with the Arrowroot starch, making sure that there are no remaining lumps. Set aside for now. 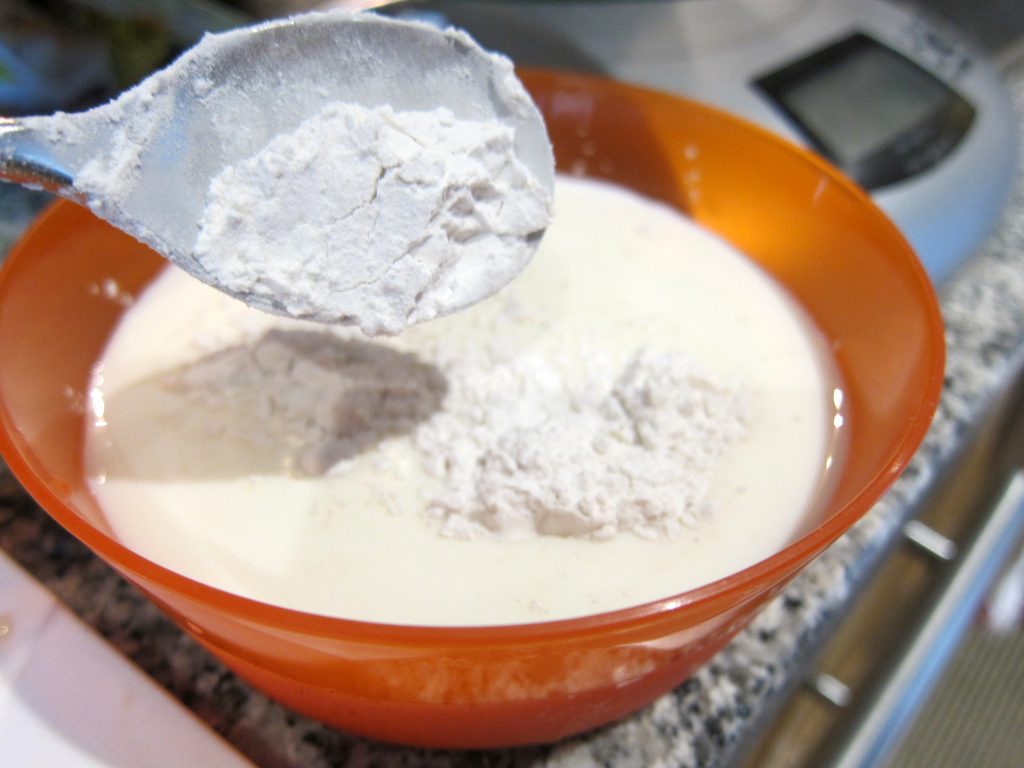 Our magic helper! Sicilian gelato uses starch (here: from Arrowroot) where more typical Italian gelatos would be using eggs. Mix it well with cold milk before adding it to the rest of the hot ice cream base.

Mix the remaining sugar and the cream in a sauce pan. Warm the mixture until steaming hot (not boiling!) on medium heat. Now, we will add the plum puree! Since the addition will lower the temperature of the ice cream base, allow it a few more minutes to heat up again.

Once the ice cream base has returned to “hot”, it is time to blend in the milk-Arrowroot starch mixture and whisk away. 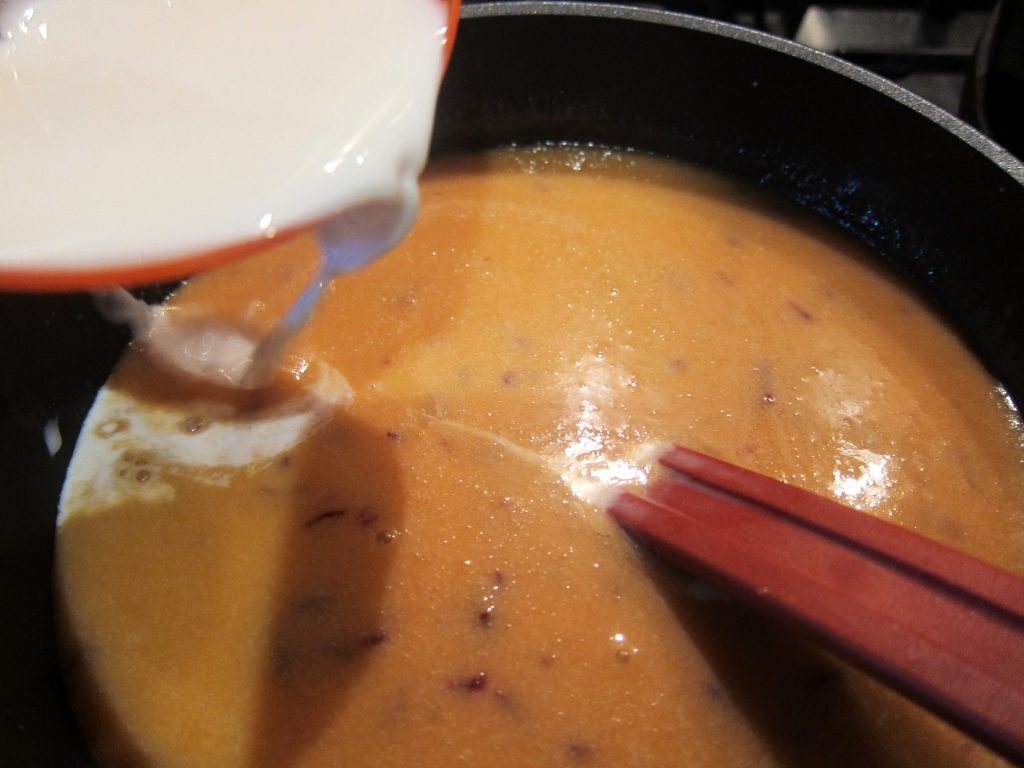 All the other ingredients (save for the optional alcohol) are in. Now, it is time to add the milk/starch mix!

Arrowroot thickens at lower temperatures than corn starch, and does not react well to overheating, so limit the continued cooking to a couple of minutes or so. This will also help protecting the fruit from becoming too “jam-like” (also the reason why I did not add the fruit puree from the very start).
Now, take the base off the heat, whisk well, and add – if using – the Kirsch. Let the mixture cool down: cold water in a sink, with and without ice cubes, is a tried and tested method for quickly bringing the temperature down. 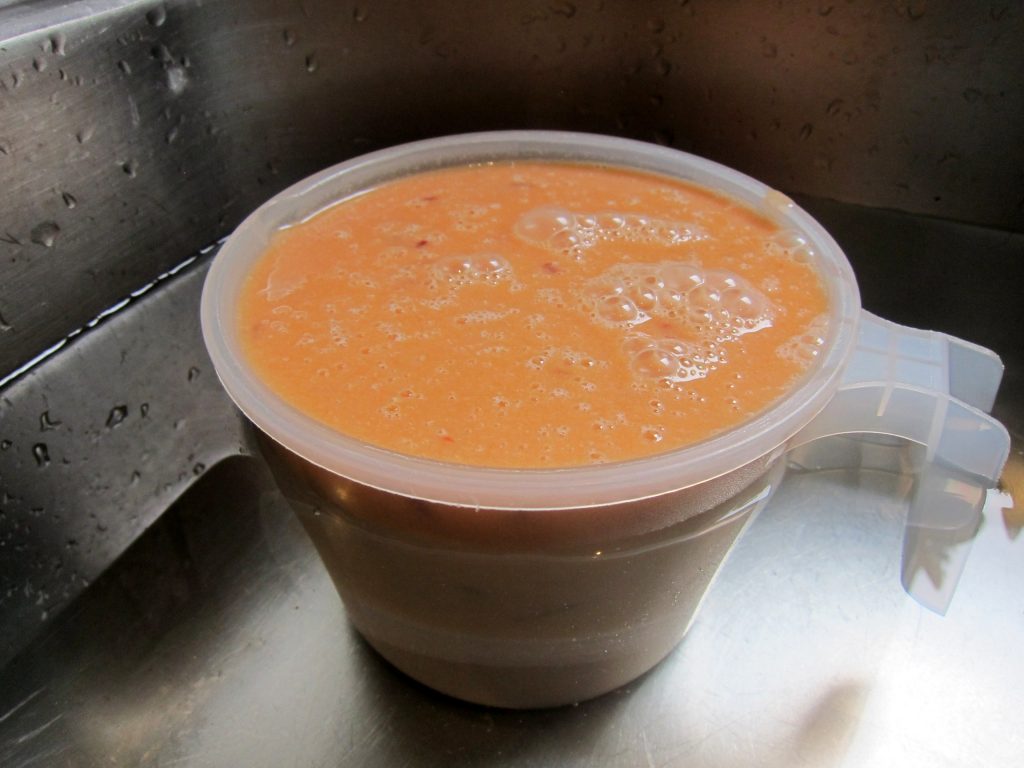 Cooling down in a sink filled with cold water: a good way to quicken up things, eventually allowing the base to continue chilling in your refrigerator.

Once cool enough, put the ice cream base in the refrigerator and let it chill for a couple of hours or so before churning it in your ice cream machine. If you have no ice cream machine, still-freeze the base in your ordinary freezer, following the instructions in this helpful post. 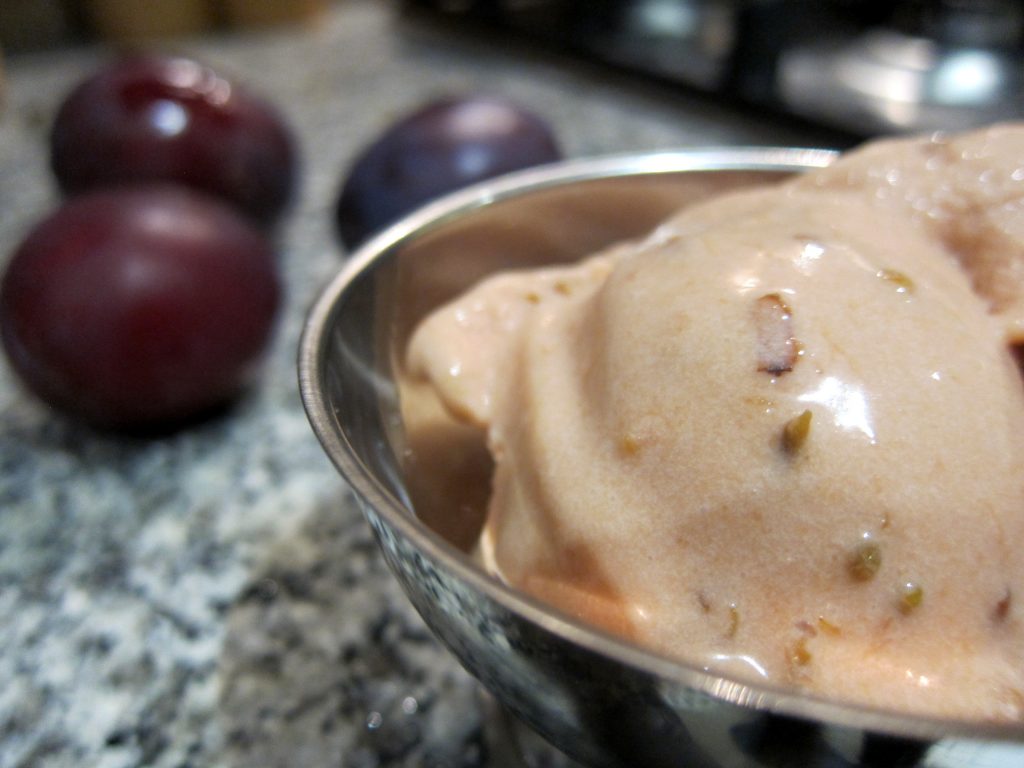 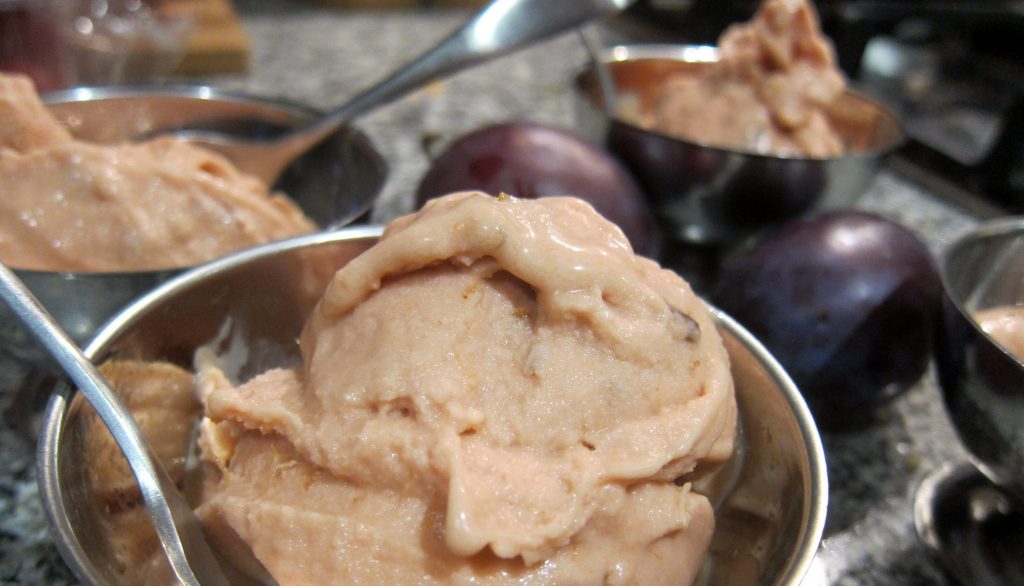 The versatile Sicilian gelato-base works very well together with the lush plums – the flavour is fruity and nice and clearly not too “jam-like” either. The overall impression is also that of a relatively “light” ice cream. No wonder, since the recipe contains a very limited amount of cream (fat) and quite a lot of liquid. In an ice cream, this would normally be difficult to pull off but this is where the starch shines! The Arrowroot powder (leaving no taste of its own either) accomplishes what a “normal” Italian gelato would require a considerable bunch of eggs to do – namely holding the ice cream together, and ensuring a great, smooth structure to our sweet, plummy creation.

Fresh ice cream is almost always incredibly tasty and the plum gelato was no exception – gloriously soft, sweet and tasty, it seduced my taste buds in a second. But somehow (don’t ask me how), I managed to persevered and not eat it all right away. Which is also why I can tell you that the ice cream remains scoopable and nice even after spending a full night in the freezer.

So, if you are able to find any nice plums: Get yourself some, and let this frozen culinary joy impress both yourself and your loved ones! 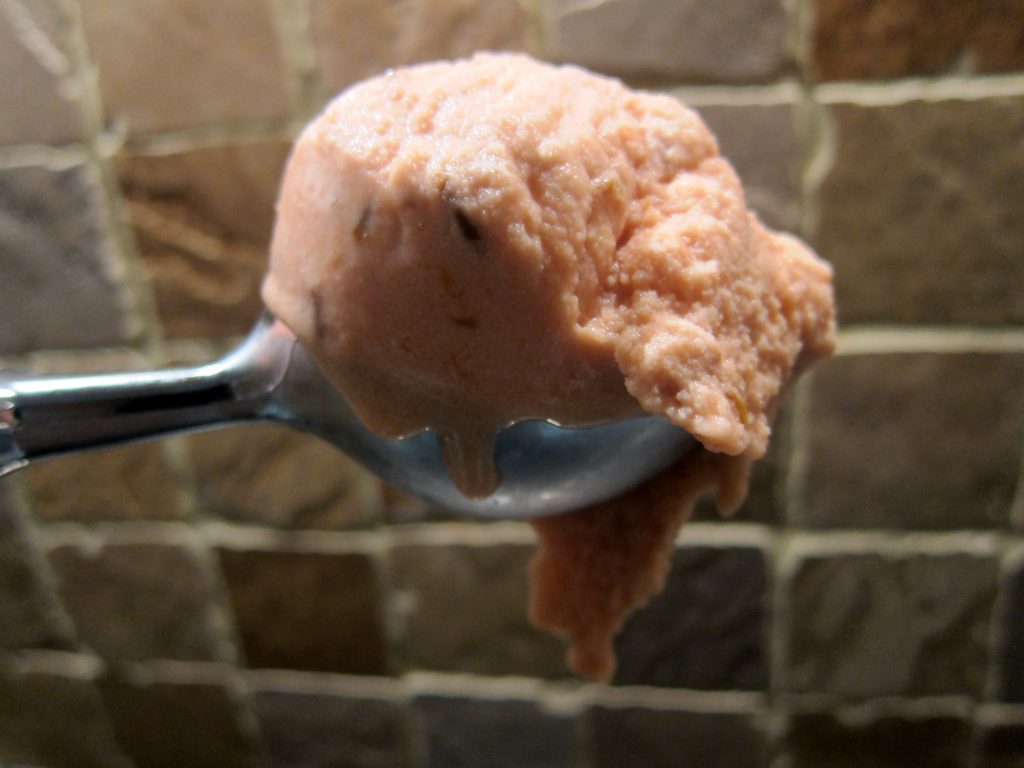 A scoop before bedtime? Just what the doctor ordered …

5.0 from 1 reviews
Print
Plum gelato - Sicilian style
By: Anders@icecreamnation.org
Luscious plums in an easy-to-cook Sicilian gelato base: What more could any plum-lover ask for?
Ingredients
Instructions
Notes
About the Kirsch: While some may prefer the "pure and plums-only" flavour, others might be interested in adding a couple of teaspoons of Kirsch or so to the puree which goes into the ice cream base. The small quantity does not really make your ice cream "alcoholic" in any significant sense, but the addition of Kirsch amplifies the fruit flavour, making the tasting experience somewhat deeper and more complex. However, again, the Kirsch is optional and even without, the ice cream should be delicious!
Wordpress Recipe Plugin by EasyRecipe
3.5.3208
Share